It's the appearance we've been all been waiting for! Prince Harry and Meghan Markle made their official public debut as they arrived hand in hand to watch the Invictus Games wheelchair tennis semi-final at Nathan Phillips Square. 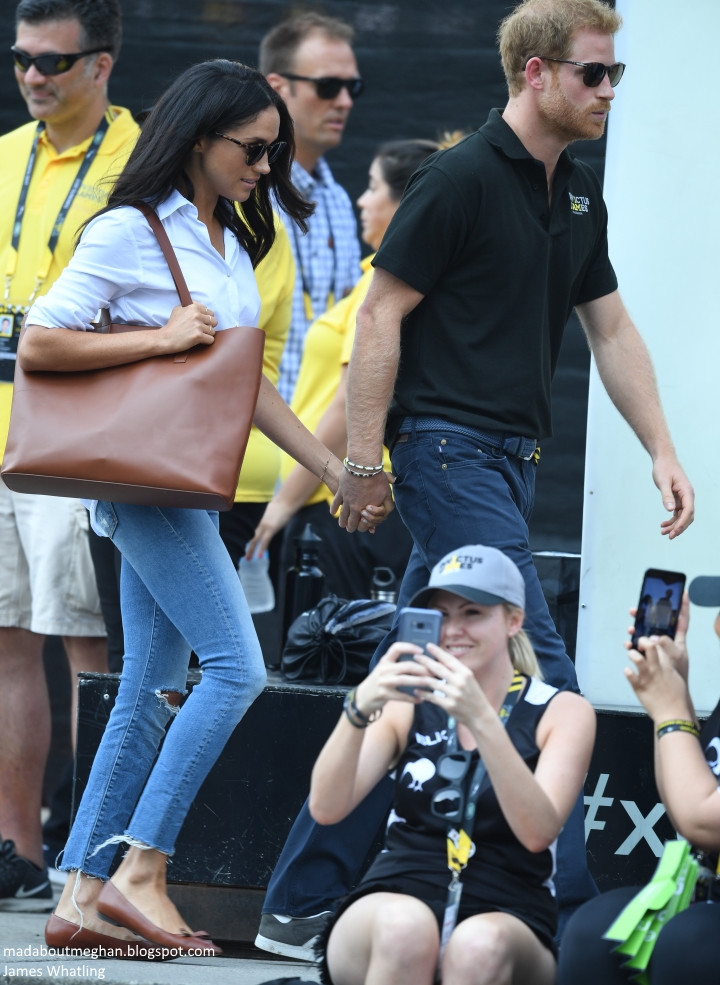 A video of their arrival.

Prince Harry and Meghan Markle have made their first public appearance as a couple, holding hands at the Invictus Games held in Toronto pic.twitter.com/GjBWPEuSoC
— The Telegraph (@Telegraph) September 25, 2017


It's a defining moment in Harry and Meghan's relationship - proving how serious the relationship is. Meghan attended the opening ceremony with her close friend Markus Anderson, but this is an entirely different ball game. It's the perfect venue for them to make their debut - Invictus is incredibly important to Harry, and Toronto has been a second home to Meghan for the past six years. The informal, relaxed feel at the Games offered the perfect backdrop. Both will know the world's media are watching. 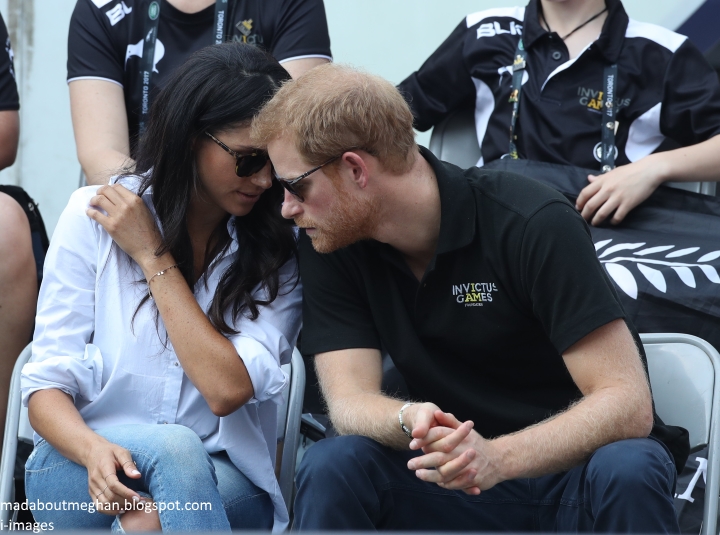 The couple were all smiles and enjoyed talking and laughing as they cheered on the participating teams. 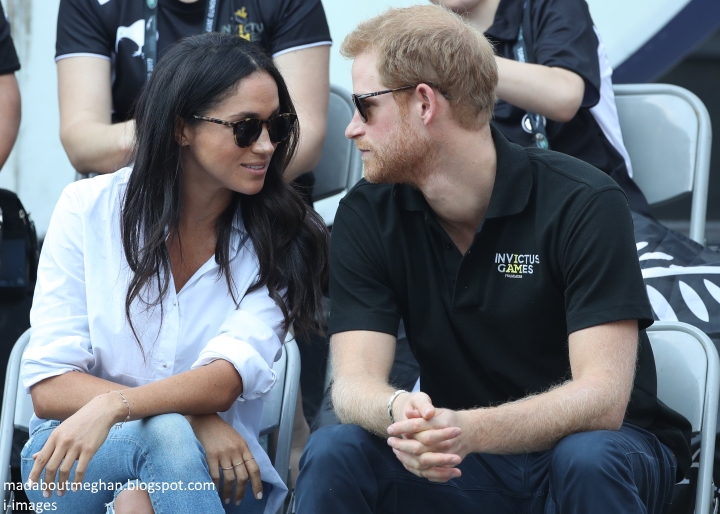 One of the most interesting aspects of the appearance is seeing them interacting together. One can say they are very much at ease and thoroughly enjoying each other's company.

They are quite clearly a couple very much in love :)

I don't know about you, but your trusty scribe thinks Ms Markle shall be wearing a sparkler before long :)

'Ms Markle slotted into her public duties immediately, making conversation with children at the court side and applauding the tennis match in front of her.'


Meghan chatting with children involved in the games.


Team New Zealand were victorious in the end. In the video below, a member of the winning team describes his Invictus experiences as "the best ride" he's ever been on.


Afterwards, Meghan joined Harry in congratulating participants and meeting those involved in the games. 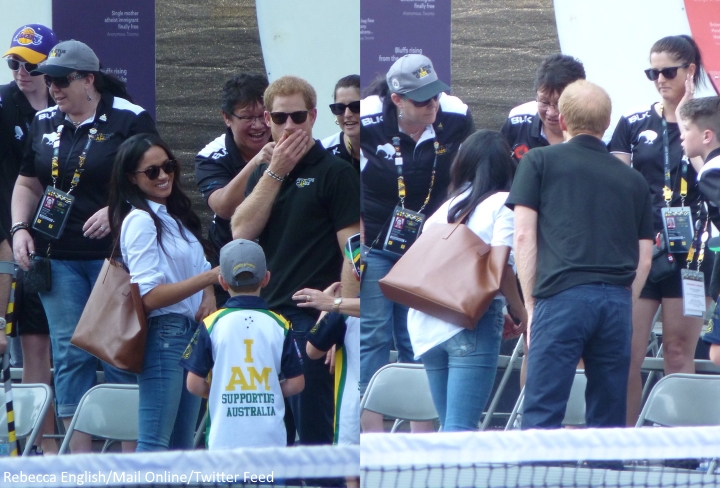 Royal reporter Rebecca English noted the pair also left hand in hand: "Do you know the one thing that struck me as I watched Prince Harry and Meghan Markle courtside today? Just how happy and relaxed they are. Perhaps she was quietly nervous, but hid it well. The buzz around her was like water off a duck's back".


Emily Andrews added: "I also think it says a lot they're holding hands so publicly. They know they're going to be pictured: and that's the pic they want."

Meghan opted for casual chic when choosing an outfit for today. The white shirt and jeans combo is very much a 'go to' staple of her style. The talented Laura quickly identified the shirt as a piece by Meghan's close friend Misha Nonoo. 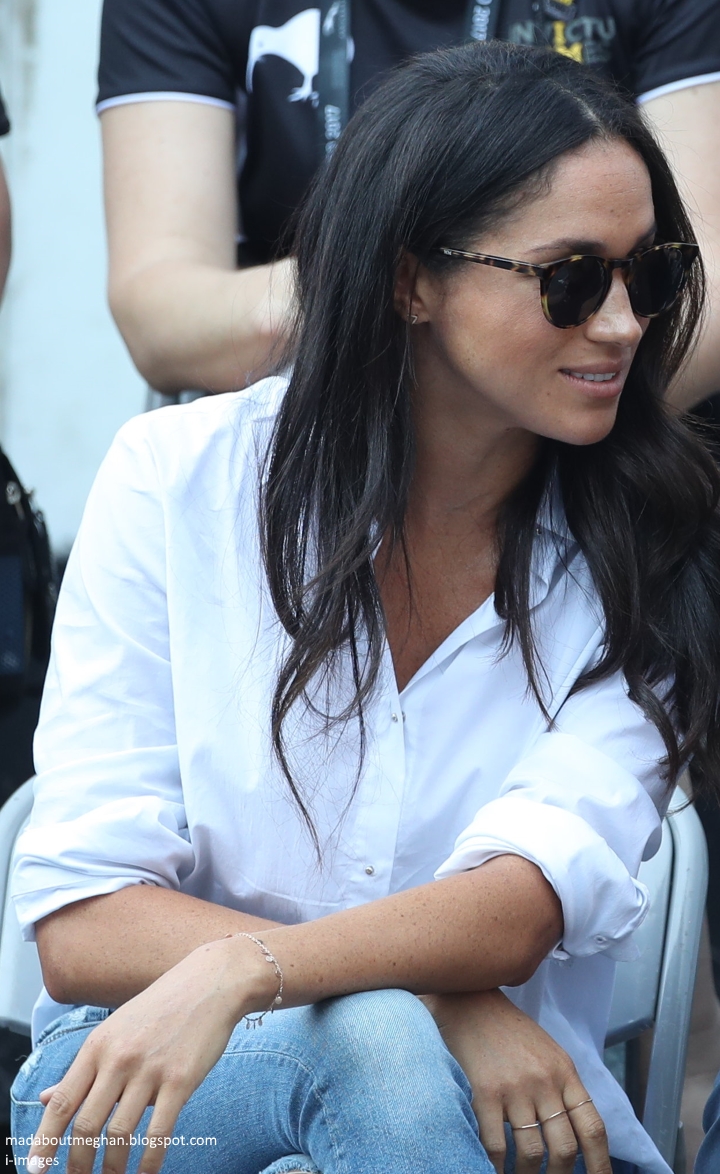 The crisp cotton style is called...wait for it...'the Husband Shirt' and retails for $185. It's available at Spring, Farfetch and Misha Nonoo's website. 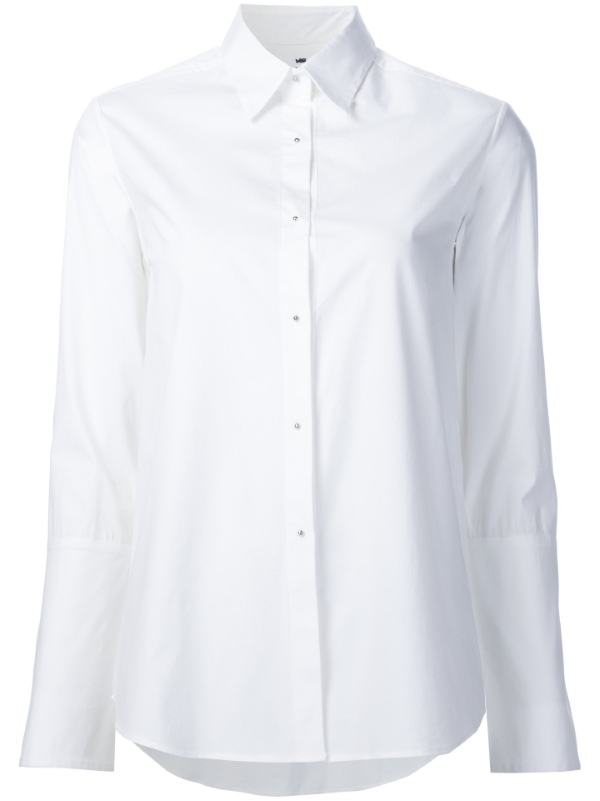 The shirt is described:

'Every brand claims to have “the perfect white shirt.” Not us. We know our crisp cotton poplin shirt is no angel. Sure, it looks prim and proper, peeking out from our black blazer, but don’t be fooled. This top has a wild side. It’s often spotted in the early morning hours of our Instagram feeds haphazardly tucked into our wide-leg pants, held together by only one metal shank. The closures are specifically designed to easily transition from day to play. Button them all the way up for work then unfasten three or four and you’re ready to hit the town. So no, this shirt isn’t perfect, but where’s the fun in perfect anyway.'


Born in Bahrain, raised in London, and educated in Paris, Misha Nonoo’s multicultural upbringing exposed her to a diverse collection of references. Her work showcases a unique outlook for the modern multifaceted woman. Offering versatile pieces at accessible price points, her collection is progressive yet classic, with both smart and sexy details that support women from 9am to 9pm. Misha won industry recognition when she became a finalist for the 2013 CFDA/Vogue Fashion Fund, and was named one of Forbes’ 30 under 30 as well as one of Crain’s New York Business’ 40 under 40. Below we see Meghan and Misha with close friend Markus Anderson on holiday in Madrid last year. 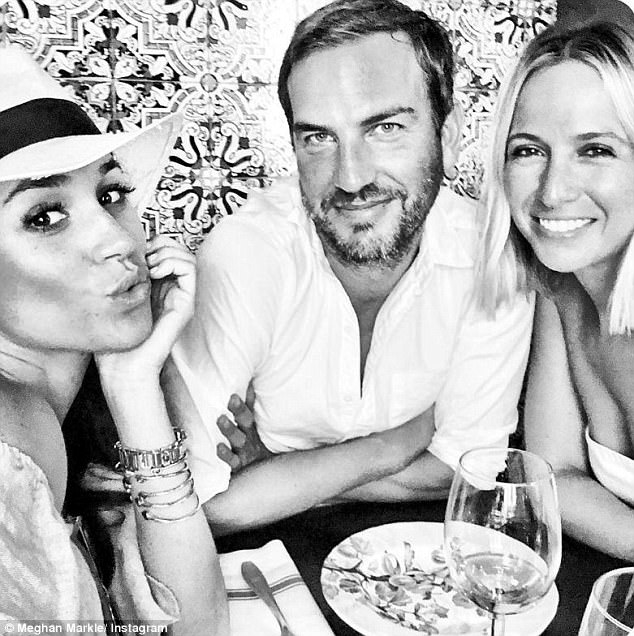 Meghan also wore her Sarah Flint 'Natalie' flats in saddle. They retail for $495. 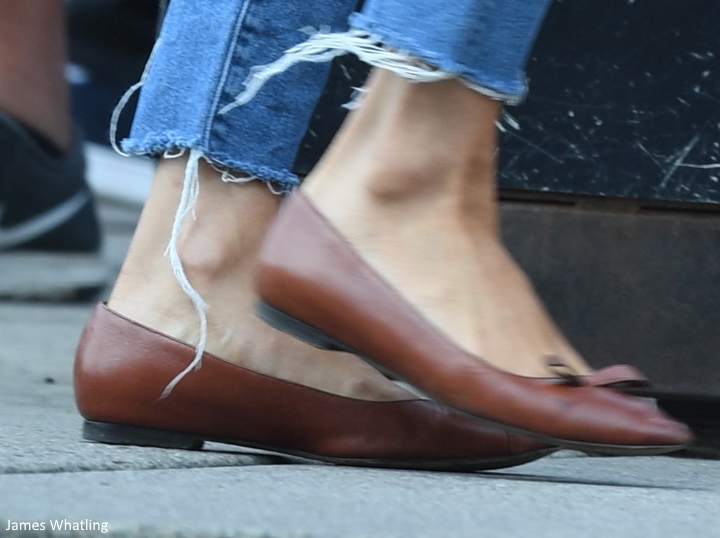 Meghan carried the Everlane Day Market tote bag in cognac (with thanks to What Meghan Wore). Made from Italian leather, the bag retails for $165. 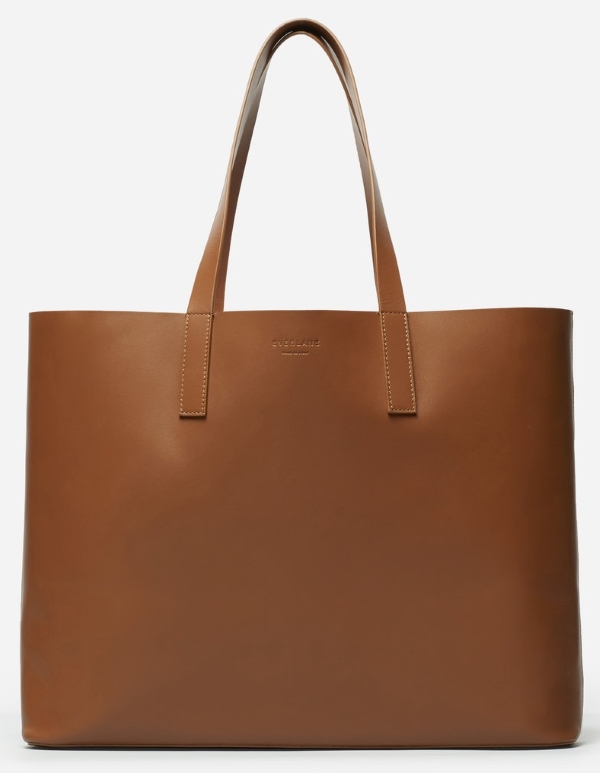 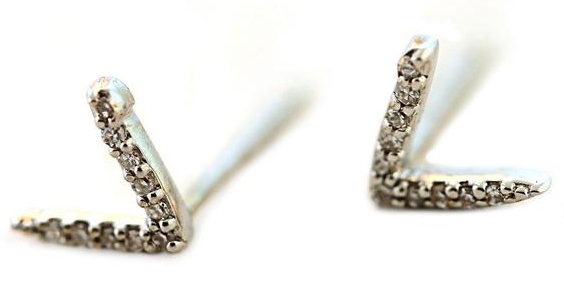 You might recall she sported the pretty pair on the cover of Vanity Fair. 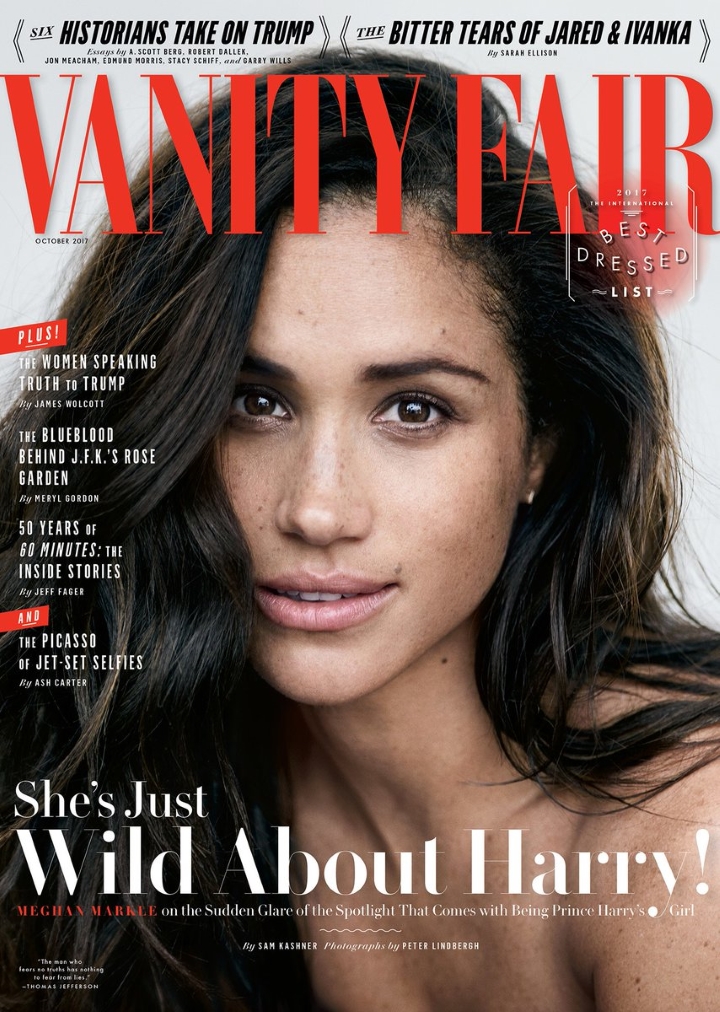 A closer look at Meghan's bracelet and rings. It was a wonderful first appearance, and hopefully not the last we'll see this week. Despite the attention they knew would be on them, they both appeared incredibly relaxed. It was lovely to see Meghan meeting competitors, and for her very much like a 'first royal engagement'. She's evidently a people person and that shone through in the photos. Without a doubt, I believe she would make a fantastic addition to the British Royal family.

What do you think of Meghan and Harry's first official appearance?
Posted by Admin at 9/25/2017