It's time for some Friday Fun here on Mad About Meghan! As we continue with our Royal Wedding series, we're going to have several posts focused on the wedding gown. We'll use the term 'several' lightly, a topic of this magnitude may require more content than anticipated. :) 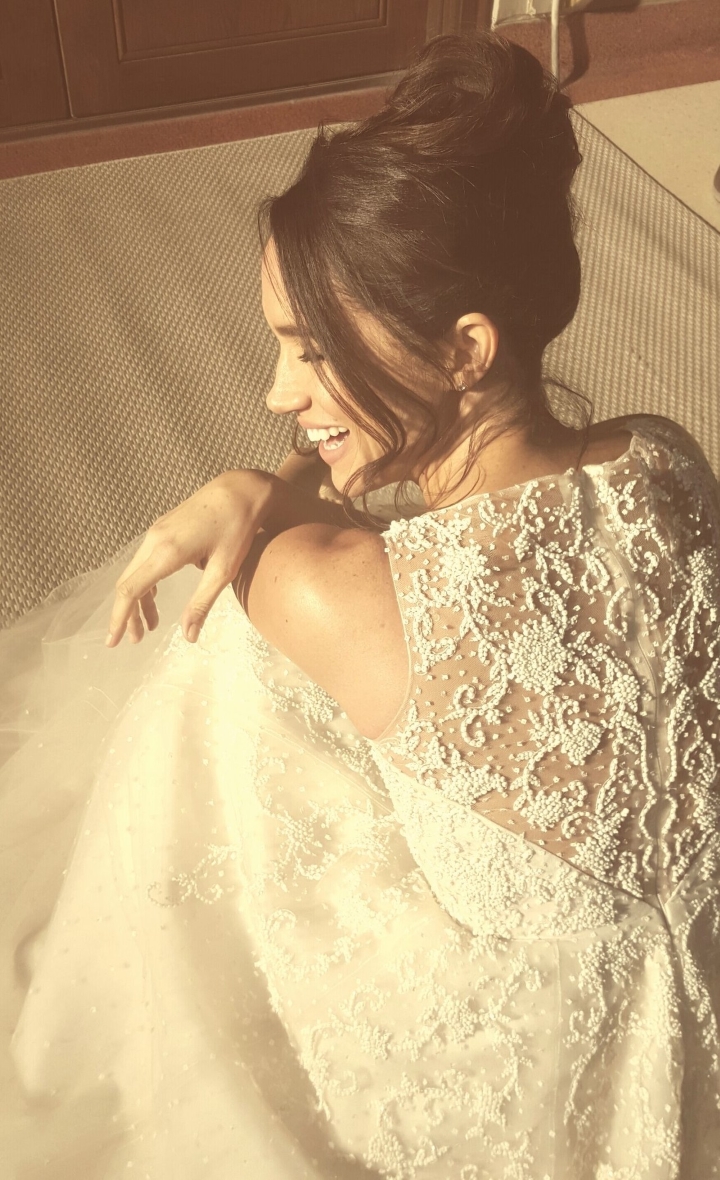 Omid Scobie confirmed Meghan's close friend and stylist Jessica Mulroney flew into London earlier this month and with her help Meghan has chosen a designer. Fittings are already underway at Nottingham Cottage and whoever secured the commission of the year will now be in the early stages of creating the custom made gown which will go down in history. The identity of the designer is unknown and will quite possibly remain that way until the big day. With so much to discuss in the coming weeks, we'll be looking at Royal Brides over the decades, discussing how protocol will play a hand in the choice, possible designer choices and much more! Today, we're focusing on the bride and sharing a little insight into the iconic bridal look she described as "Everything Goals", and we're looking at her favourite bridal designers... 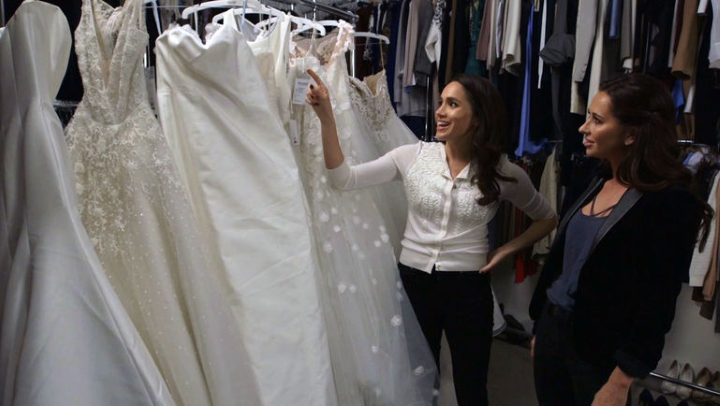 Thanks to Meghan's Suits character Rachel Zane, we have an indication of the style and overall feel of gown Meghan will want created for her. We also have an idea of styles not going to make the cut, including the Ann Barge gown she wore on Suits. The Versailles Plunge Embroidered Tulle Gown is fashioned from Italian fabric and features a beaded back. In many ways it fits the ''fairy tale bill'. Speaking to Glamour she said: "It's not my personal style, because I'm a lot more relaxed than Rachel but I love that I got to play dress up in this gown. For TV we did have to bring the neckline up a touch per the producers request, but the original design has a low ballerina inspired neckline and I happen to love that." 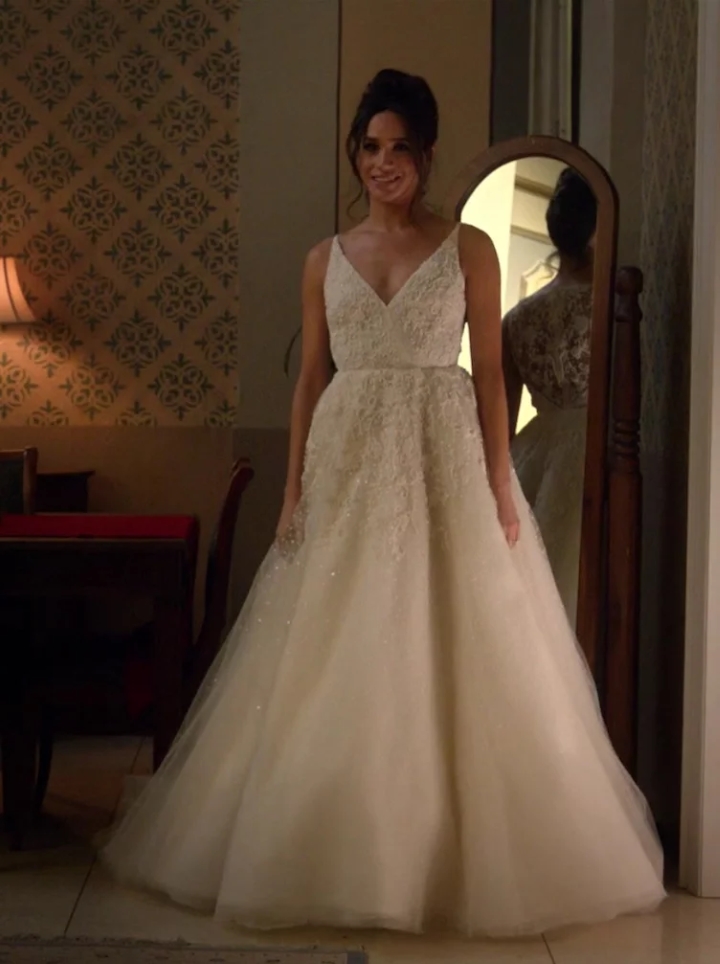 When asked about her ideal wedding dress, Meghan responded "classic and simple are the name of the game":

'I have the luxury of wearing beautiful pieces of clothing every day for work, so my personal style—wedding or not—is very pared down and relaxed. Classic and simple is the name of the game, perhaps with a modern twist. I personally prefer wedding dresses that are whimsical or subtly romantic.'


I was very interested to see Meghan's answer when she was asked to name her favourite celebrity wedding dress. She responded: "Carolyn Bessette-Kennedy. Everything goals." 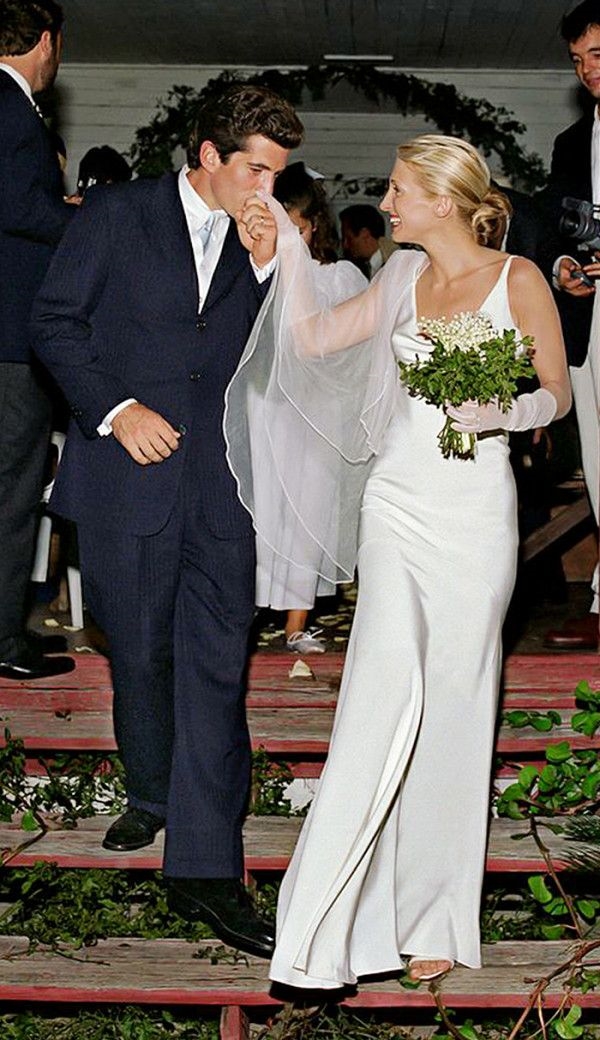 Carolyn Bessette was born in New York in 1966 and enjoyed a successful career at Calvin Klein. During her time there, she went from being a saleswoman in Boston's Chestnut Hill Mall to becoming the director of publicity for the company's flagship store in Manhattan. While working for Klein in Boston, Bessette was noticed by Susan Sokol, a travelling sales coordinator for the company. Sokol, impressed with Bessette's grace and style, later recommended her for a position dealing with Klein's high-profile clients, such as actress Annette Bening and newscaster Diane Sawyer. In 1992, she met and fell in love with John F. Kennedy Jr. They quickly became one of the most talked about and photographed couples in the world with Carolyn gaining instant recognition for her classic, cool, chic style. In September 1996, the couple married. The ceremony took place by candlelight on the remote Georgia Island, Cumberland, in a tiny wooden chapel, the First African Baptist Church. Carolyn worked with the then little-known designer Narciso Rodriquez to create a pearl white silk crepe gown with white gloves and a veil. Over twenty years later it remains breathtakingly beautiful. It is the definition of 'less is more'. 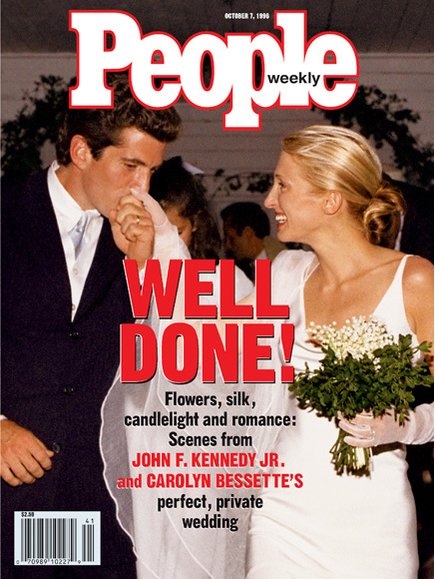 Almost three years after their wedding, John F. Kennedy Jr, Carolyn Bessette-Kennedy and Carolyn's sister Lauren tragically lost their lives when the plane Kennedy was piloting crashed into the Atlantic Ocean off of Martha's Vineyard. Carolyn remains a style icon today and is referenced in popular culture. Rosamund Pike was encouraged by Gone Girl director David Fincher to base her character, Amy Dunne, on Bessette-Kennedy. Fincher said of Bessette-Kennedy: "She crafted herself, she re-invented herself, and invented that persona. That's where I began." In 2015, Wes Gordon, known for disliking discussion about the influences of his collections, admitted Bessette-Kennedy's impact on the clothing for women in that year's collection. Gordon was long interested in Bessette-Kennedy's style prior to production. 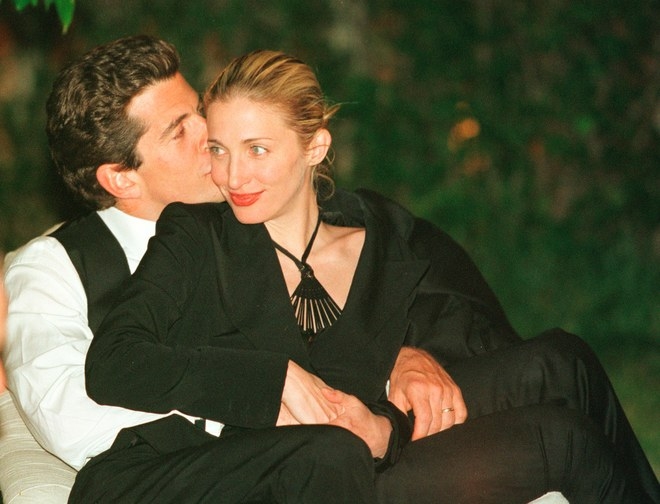 Media outlets have been reporting for months Carolyn Bessette-Kennedy is a major fashion influence for Meghan. Her choice of black and camel for her first public engagement in Nottingham is straight out of Carolyn's playbook. 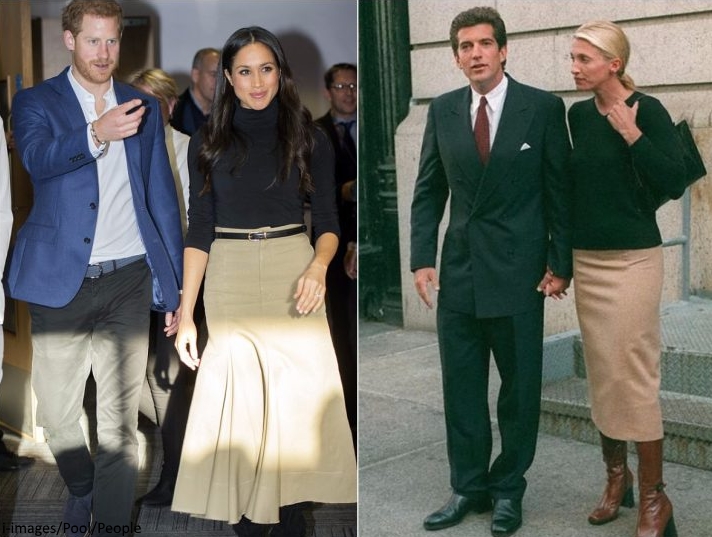 During the Glamour interview, Meghan listed her favourite bridal designers:

Delphine Manivet and Christos Costarellos are faves of mine for their uniqueness and beauty. And I will always be a fan of Elie Saab. J. Mendel is spectacular as well, especially for more structural designs.

A very interesting selection of names. Delphine Manivet is a well-known French bridal designer known for her whimsical contemporary designs. 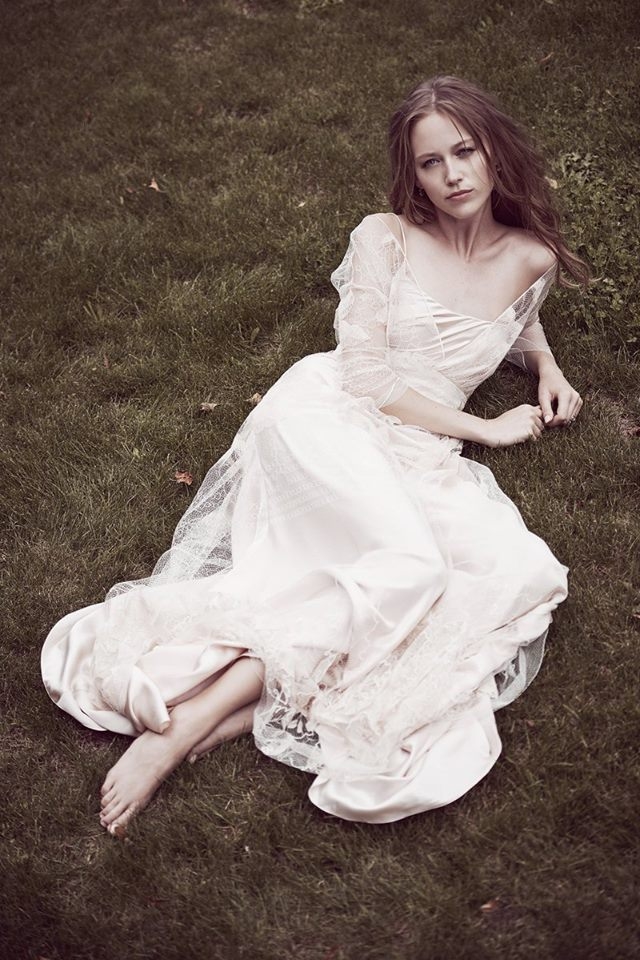 The Knot reports: "If you're style icon is a mix of Carolyn Bessette-Kennedy and Catherine Deneuve, get excited."

'Delphine Manivet trained at the prestigious Institut Supérieur de la Mode in Paris. She joined the design studio at the house of Rochas and also worked as a stylist for several other houses. This all changed the day she designed her own wedding dress—from that moment she received countless requests from her friends to create their dresses as well. Delphine Manivet started her brand 10 years ago and maintains the belief that "the dress should be a girl's only makeup." Mais oui! She's also designed wedding dresses for Riley Keough and Lily Allen, as well as red carpet looks for Kristen Wiig, Lady Gaga and Sarah Jessica Parker. '


The designs are very pared back; not a 'meringue' dress in sight. Absolutely stunning silhouettes but perhaps a tad too simple for a royal wedding? 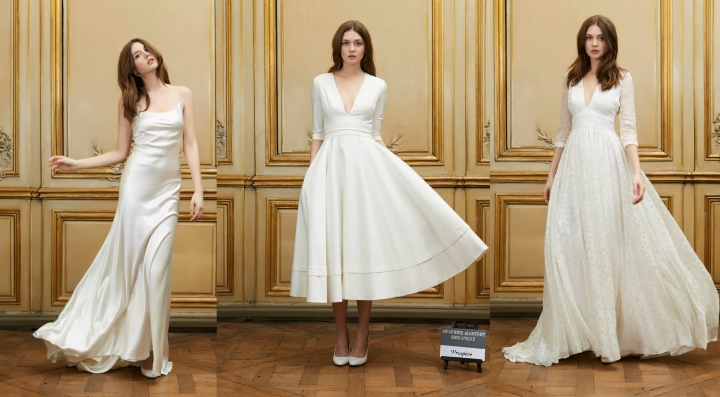 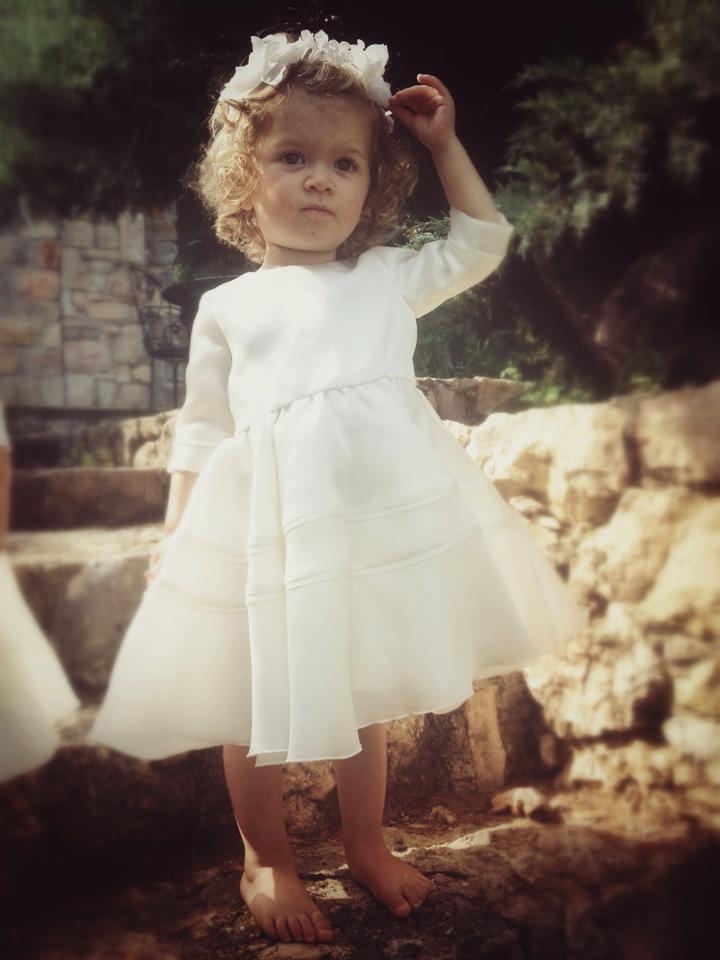 Costarellos Christos was born in Dusseldorf, Germany. He was introduced to the fashion world at an early age, as his parents were both working in this industry.  He studied fashion design at Dimitrelis School of Fashion in Greece and then theatre costume design at London College of Fashion in England. The fashion house of Christos Costarellos was launched in the Greek market in 1998 with his first RTW line which was dedicated to the craftsmanship of moulage and couture techniques. 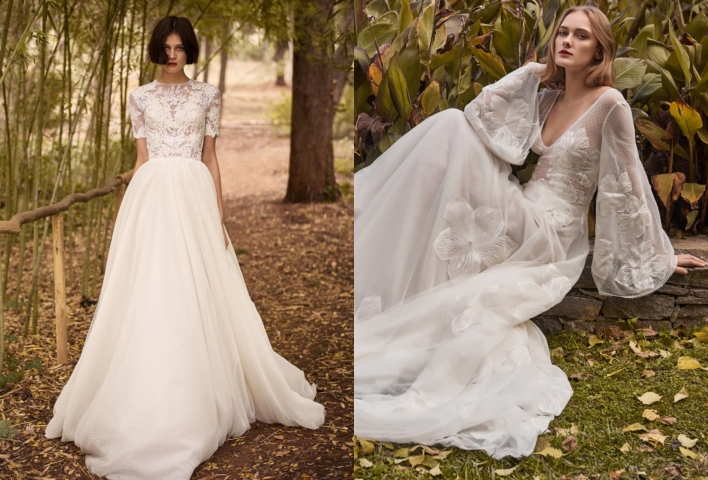 The Costarellos Bridal Spring 2018 collection is inspired by the magnificence of the Greek spring landscape, the Greek tradition and history are portrayed through intricate lace patterns, floral lace appliques and column silhouettes. The dresses are made with high-end craftsmanship from the finest French materials, like soft Chantilly and cordonnet lace, French broderie, and applique flower lace details. 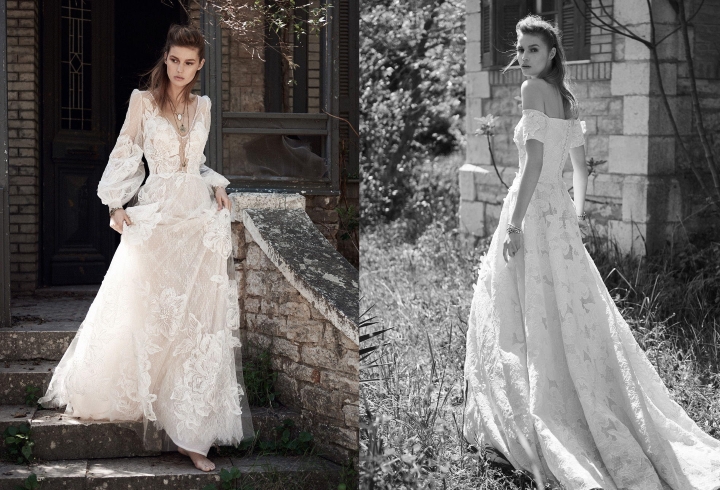 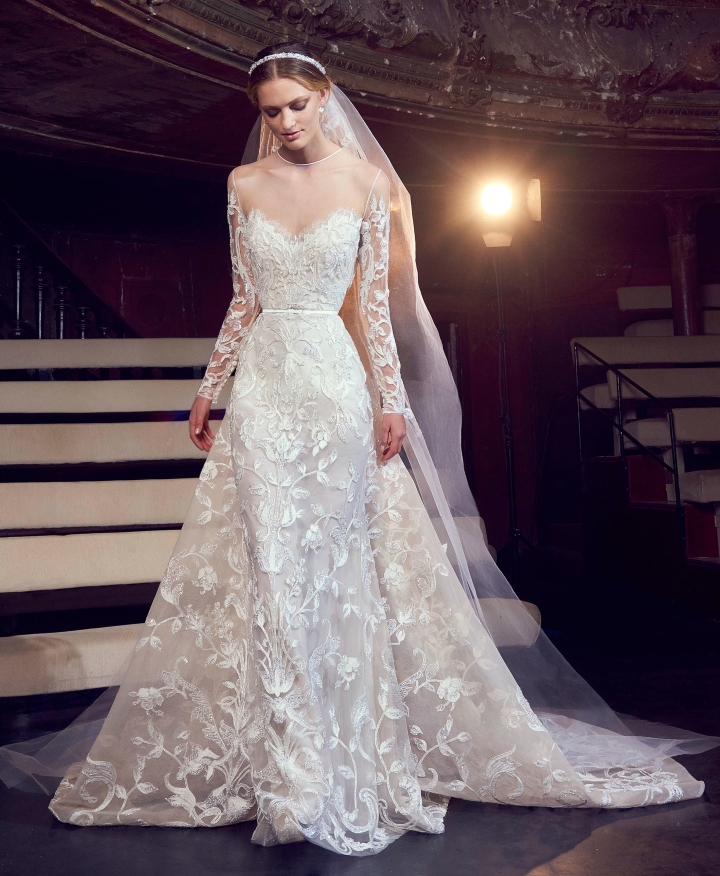 The collection is a sea of organza, tulle, shimmering v-neck columns, metallic threads and feminine touches. The designer can also be replied upon to provide a dress fit for a princess... 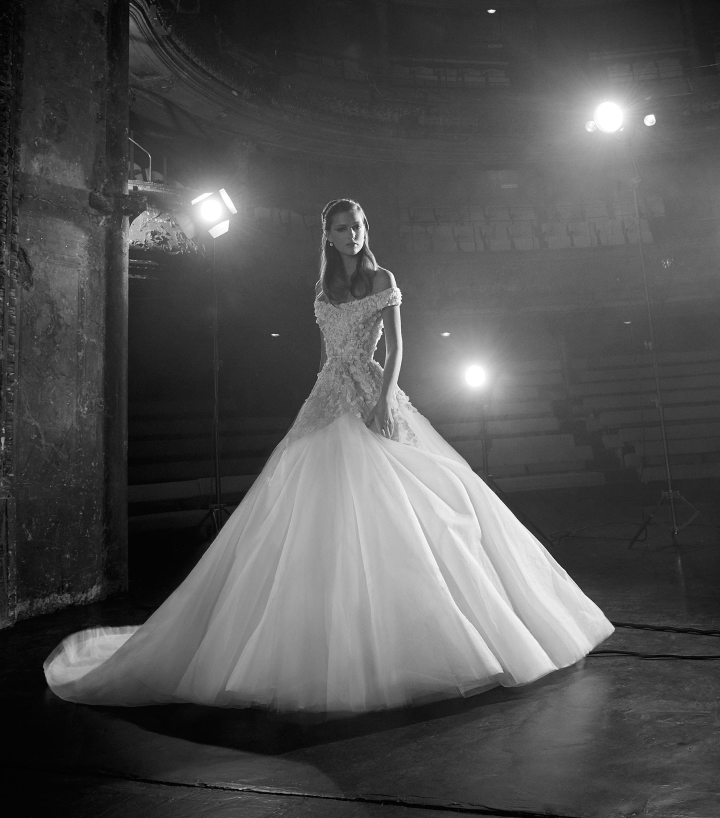 Take a look at the details... 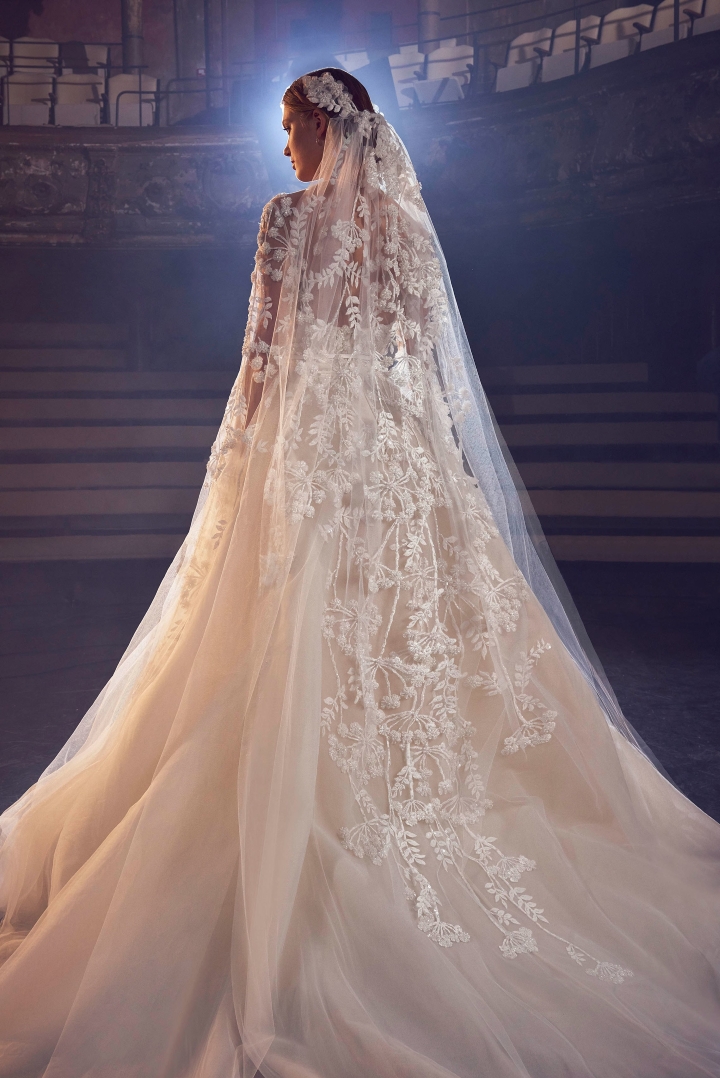 Now, we must move on from Elie Saab's divine designs... Okay just one more... 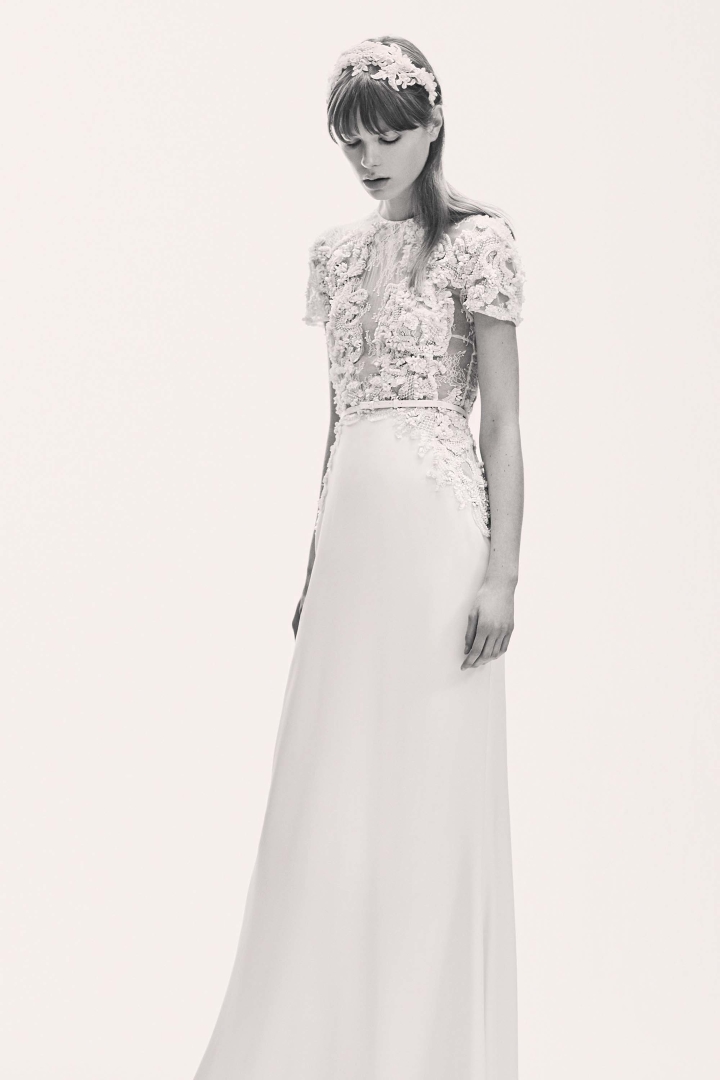 And take a look at the sculptural lines and refined silhouettes from J Mendel.

Based on everything Meghan said, Mendel's structured, sleek, perfectly-tailored gowns designed with a "21st century bride" in mind are the most in keeping with the styles she would choose. Obviously, protocol and the nature and gravity of a royal wedding are going to play their part in the overall finished choice. Could Meghan walk up the aisle in a structured dress and forego the traditional princess bride look? 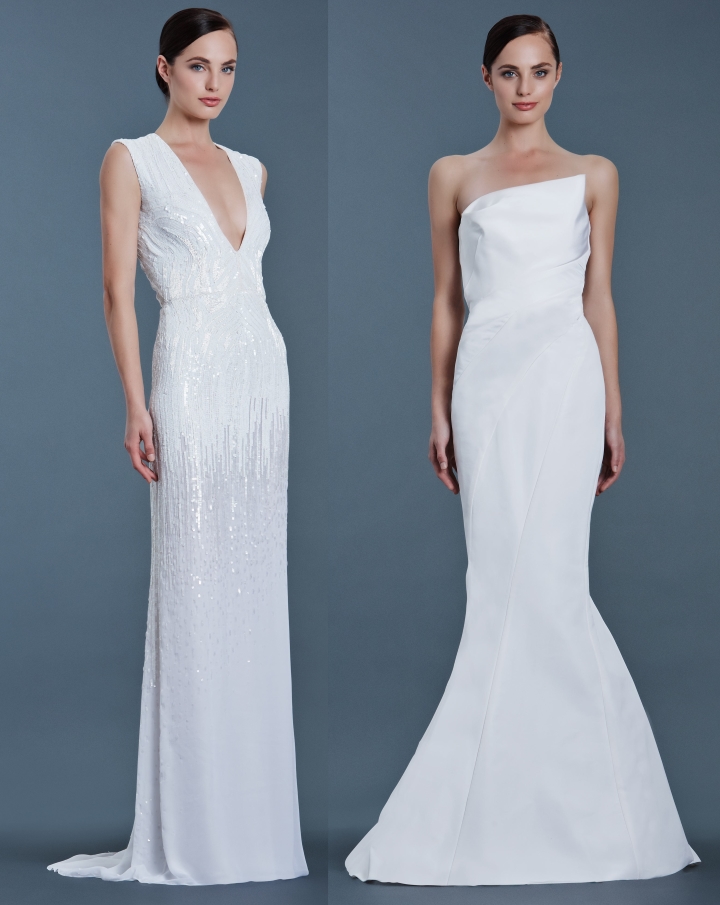 Whatever Meghan's final choice will be, there's no chance Harry will be getting a peek before the big day. When asked about the groom seeing the dress, she replied: "I'm very superstitious but I wouldn't say that it's bad luck; I would just say I prefer sticking with traditions. ;)"
Posted by Admin at 1/26/2018