The reception is Meghan's second Commonwealth Heads of Government Meeting event. Yesterday she and Harry attended a reception with deletegates from the Youth Forum. I suspected it very likely we would see Meghan attend an engagement in support of women during this historic week. Women's issues have long been an area of interest for the future Duchess. I understand she has been privately visiting organisations around the UK focused on the area and supporting women will form an important part of her official work after the wedding. 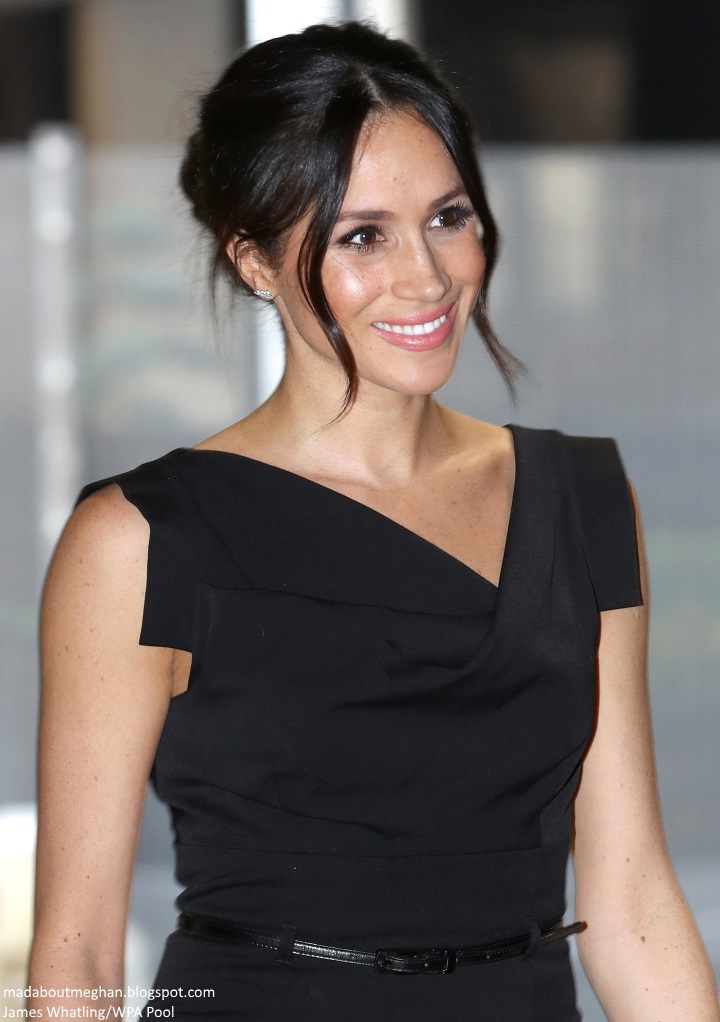 The couple were greeted by host Boris Johnson and his wife Marina Wheeler. 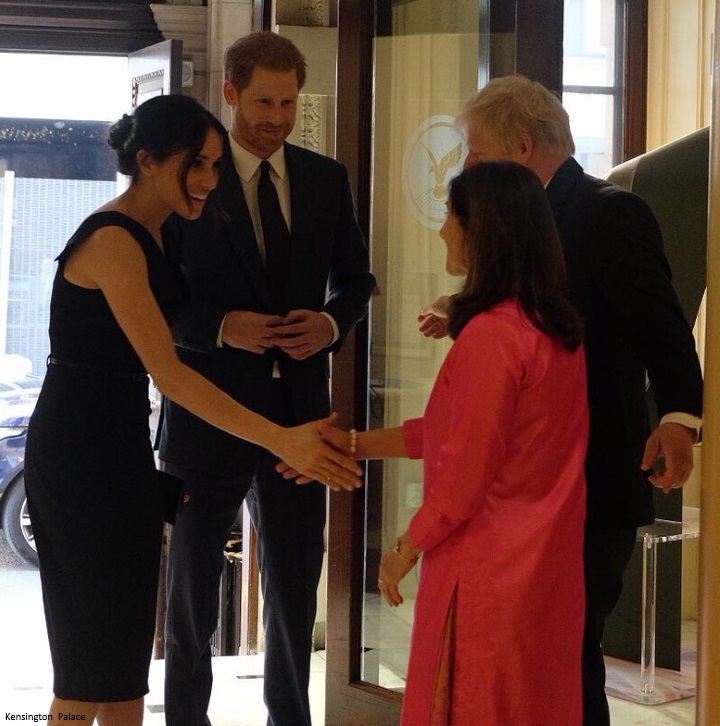 It is exactly one month until the Royal Wedding :) 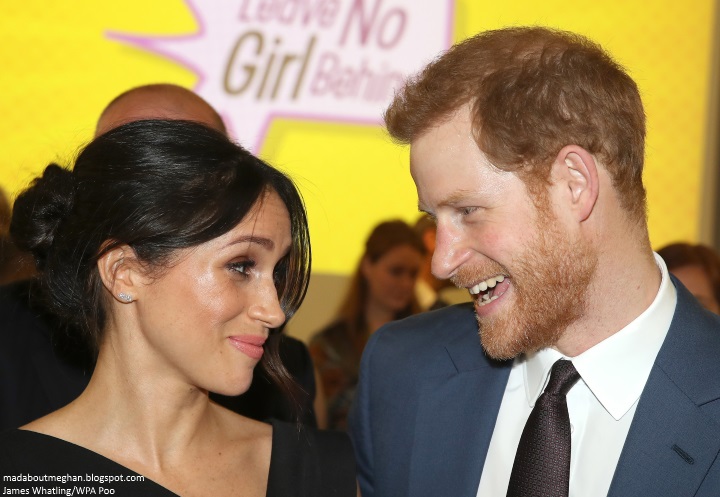 A video from Richard Palmer.

During the Royal Foundation Forum, Meghan said "I think what's really interesting when I hear people speak about girls empowerment is finding and knowing their worth. You'll often hear people say 'Well you're helping women find their voices' and I fundamentally disagree with that because women don't need to find a voice. They have a voice. They need to feel empowered to use it and people need to be encouraged to listen. I think right now in the climate we're seeing with so many campaigns; MeToo and Times Up, there is no better time than to really continue to shine a light on women feeling empowered and women really helping to support them in that. Men included. It makes such a tremendous difference." 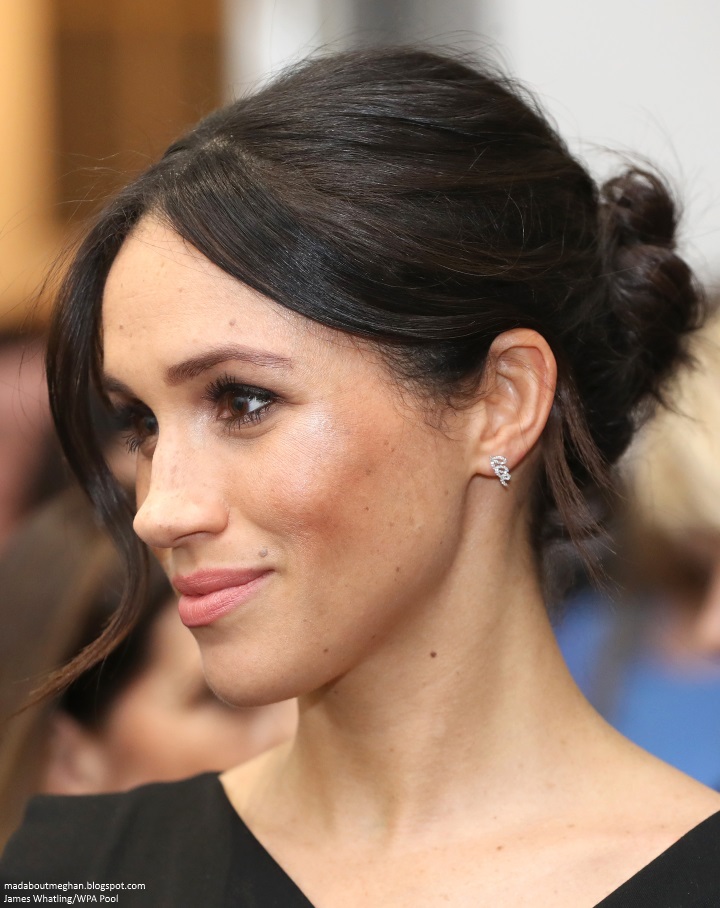 The 2018 Women's Forum reflected on some of the global challenges still faced by women, as part of a wider commitment to "leave no one behind" in the Commonwealth journey to achieving gender equality by 2030. The Forum addressed the theme of "An empowered future for women and girls". 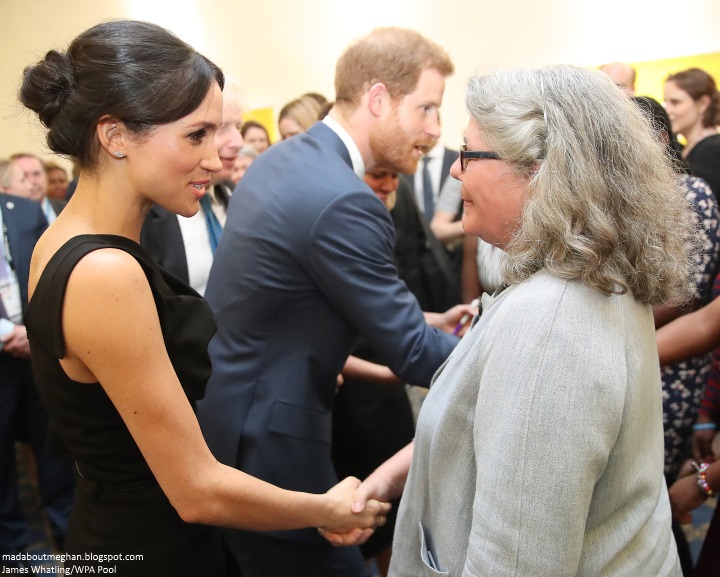 Throughout the week, sessions have focused on the following: Women in leadership, Women, peace and security, Women's economic empowerment, Gender parity in education, Ending violence against women and girls and Eliminating harmful practises. 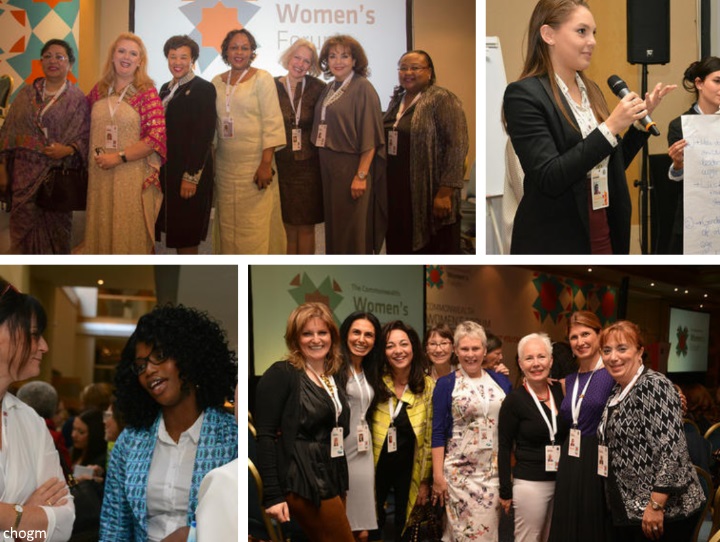 Harry and Meghan were in terrific form as they chatted with guests. 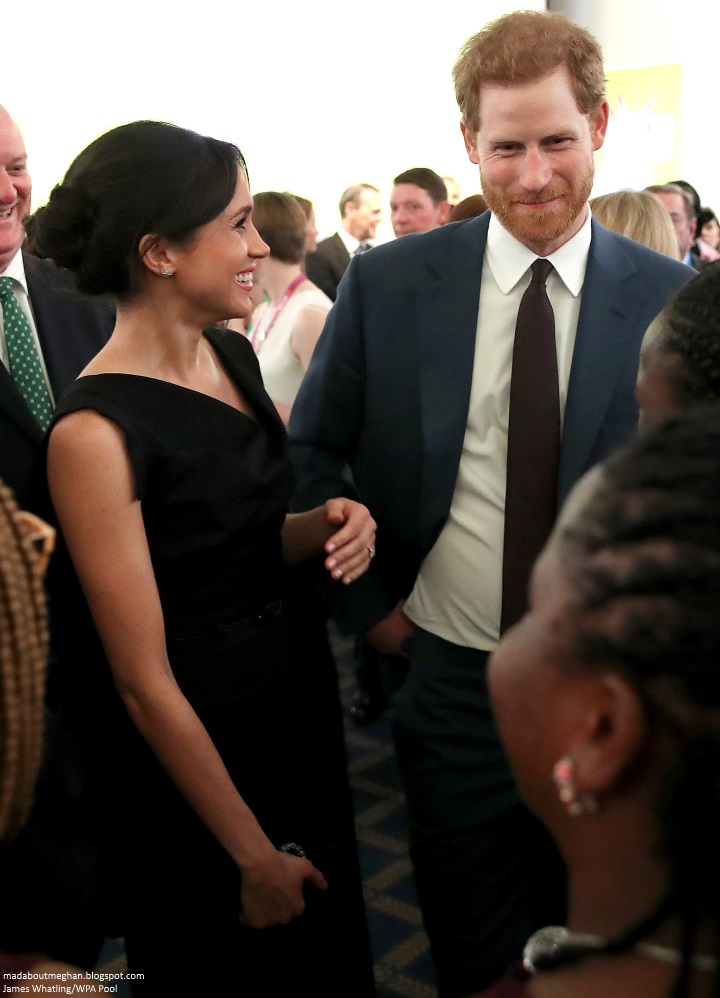 Foreign Secretary Boris Johnson, launched his Platform for Girls Education, a group of 12 influential figures from across the Commonwealth who will drive forward the political momentum on girls’ education. 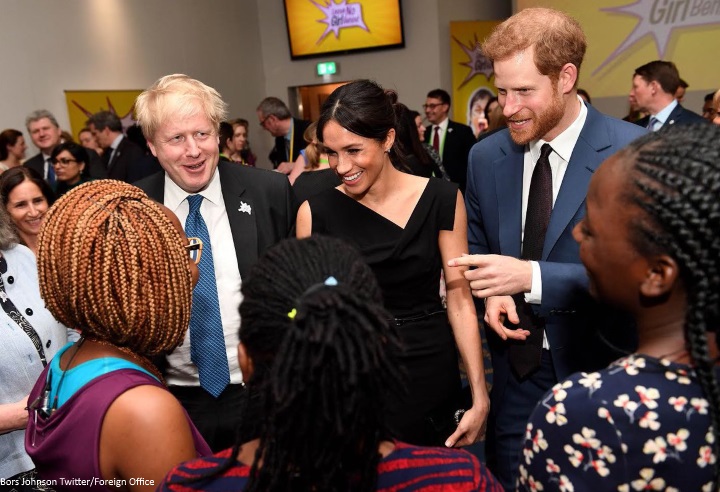 Harry, Meghan and Boris with the Australian Minister for Foreign Affairs Julie Bishop. 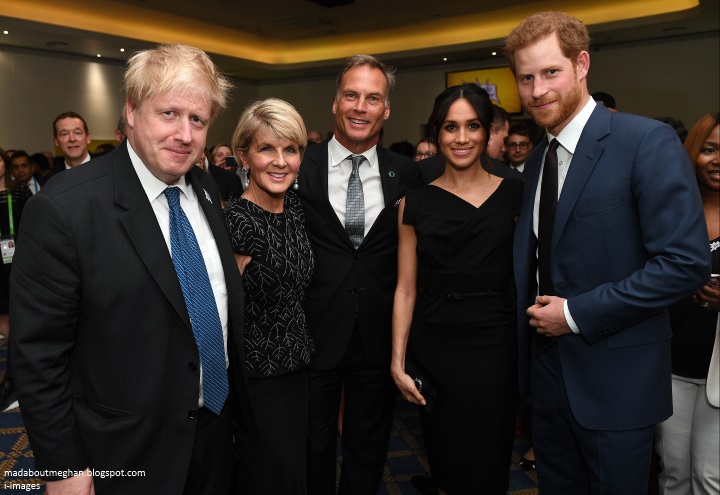 A video from Kensington Palace.

Prince Harry, Ms. Markle and the Foreign Secretary meet guests from organisations who are supporting the aim to provide quality education to girls across the Commonwealth. #CHOGM2018 pic.twitter.com/4hvUnzdEaL
— Kensington Palace (@KensingtonRoyal) April 19, 2018

Before the summit began, Mr Johnson said he would use CHOGM to push for all countries to ensure that girls received at least 12 years of good quality education. "Improving education for girls could be the single most effective intervention in some of the world's poorest and most troubled countries. The figures are unbelievable. In some parts of sub-Saharan Africa you've got 60%, 70%, 80% illiteracy among women,"

We can empower girls. They can change the world.

Charities at the reception included the Malala Fund, Plan International, the Varkey Foundation and Code Camp. 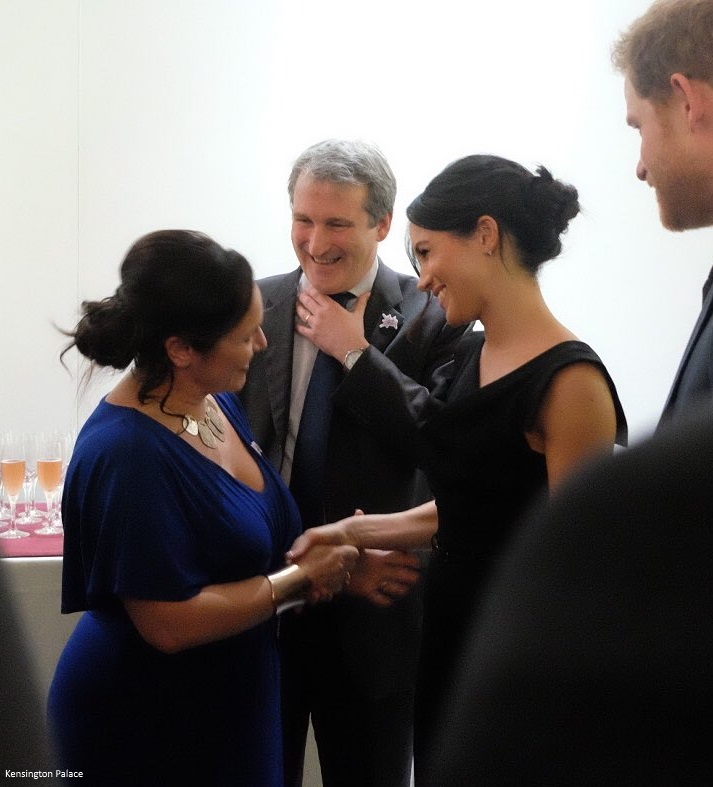 Yesterday the government confirmed plans to ensure one million girls across the Commonwealth get a quality education to play a transformational role in their communities and societies:

'Almost one million vulnerable and marginalised girls in developing countries across the Commonwealth will receive the life-changing education they need to become the thinkers and leaders of the future, the Prime Minister announced.

130 million girls around the world are missing out on school, and in Sub-Saharan Africa fewer than 1 in 20 poor, rural girls are on track to complete secondary school.

The Department for International Development (DFID) Girls Education Challenge will make sure 920,000 girls continue their education through primary, secondary school and training, so they can fulfil their potential to play a transformational role in their communities, economies and political institutions.

Today’s announcement will also give a further 53,000 adolescent girls in developing countries across the Commonwealth, who have never attended or dropped out of school due to poverty, motherhood, disability or conflict, a second chance to learn through catch-up classes and vital skills training.

DFID is also launching a new research partnership with the Malala Fund and the UN Girls’ Education Initiative (UNGEI) to help governments better harness their own resources to break down barriers to education for the most marginalised girls.'

'Speaking with a group of young women who are championing the rights of girls to free education, Harry said: “What you are doing is absolutely amazing. Kiki James, an activist from Nigeria who is a champion with the Malala Fund, told reporters, “He said we are moving with the tide, moving in the right direction.”

Peace, a 15-year-old schoolgirl from Nigeria who spoke at the summit earlier this week during the Educate to Empower session, added, “I told Meghan she was pretty, which she is. She said she watched me give my speech. She said she was really impressed, and that that is what she wants girls to do.”

Hope, an 18-year-old from Kenya who campaigns on equal education rights for girls, said she told Meghan and Harry “that if they empower girls we won’t let them down.” She added: “Meghan Markle was talking about how it has a rippling effect — how if you empower girls they empower the next generation in the community.”


Royal reporter Rebecca English wrote: "It is clear that both Harry and Miss Markle, who made clear her intention to 'hit the ground running' when it came to her official duties, plan to take a lead in Commonwealth matters." I saw several people on social media calling Meghan and Harry 'The Commonwealth Couple'. It has a very nice ring to it and seems entirely apt given their shared interest and plans for the future. 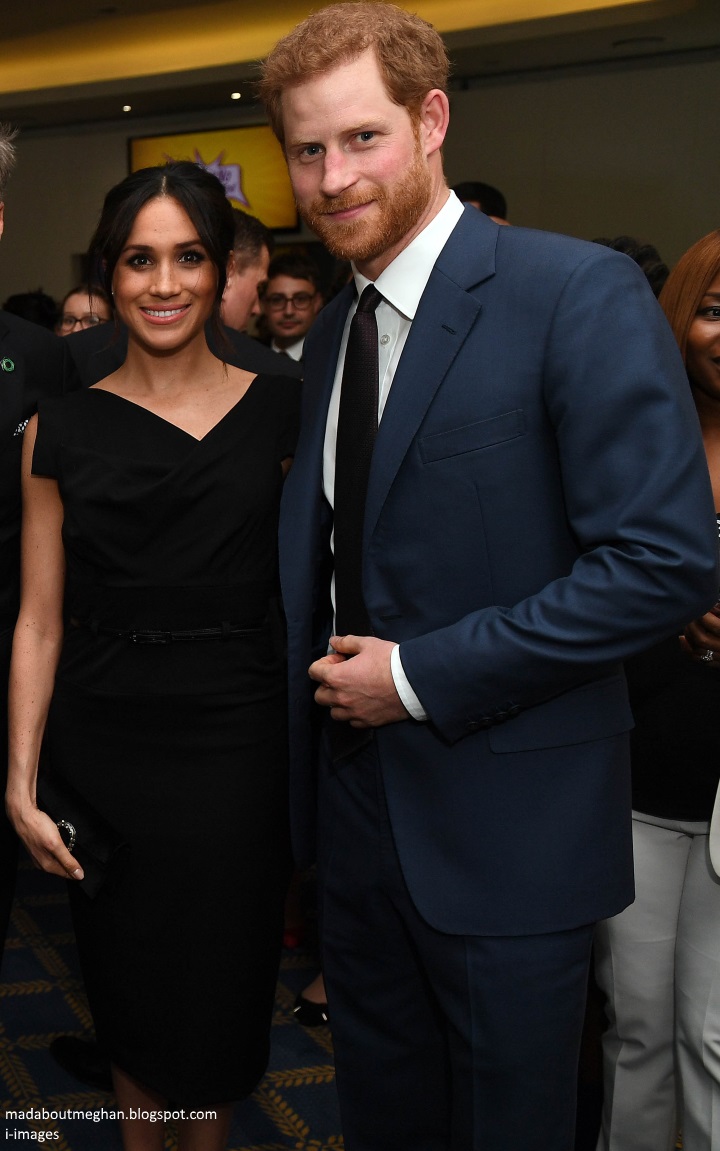 After the reception, Boris Johnson tweeted: "Girls’ education is the Swiss Army knife that solves a multitude of the world’s problems. Fantastic that HRH Prince Harry and Ms Meghan Markle joined me tonight to launch 12yrs of quality education for world's poorest girls in our Commonwealth." 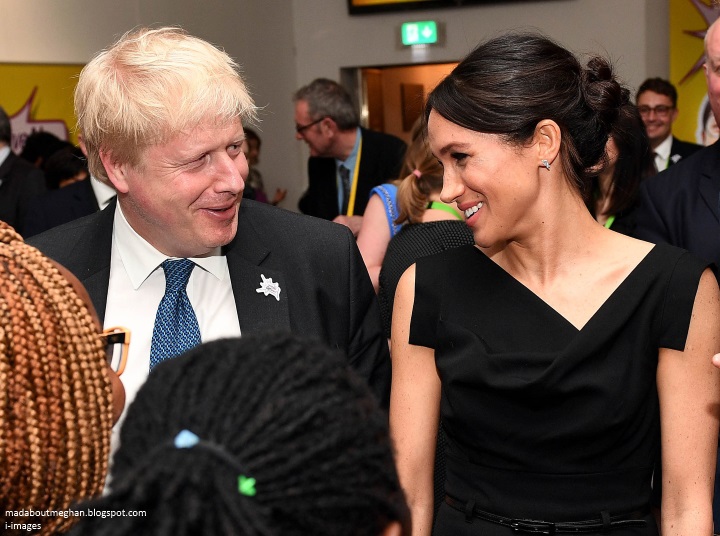 This morning, William and Harry joined Prince Charles, the Queen and a number of other royals for the CHOGM official opening in the Buckingham Palace ballroom. During a significant speech, Her Majesty expressed her "sincere wish" that her son will succeed her as Head of the Commonwealth: “It remains a great pleasure and honour to serve you as Head of the Commonwealth and to observe, with pride and satisfaction, that this is a flourishing network. It is my sincere wish that the Commonwealth will continue to offer stability and continuity for future generations, and will decide that one day The Prince of Wales should carry on the important work started by my father in 1949.”

The Queen has expressed her "sincere wish" that her son, the Prince of Wales, will one day succeed her as Head of Commonwealth, in the clearest signal yet about the future of the family of nationshttps://t.co/1alWcq8w4t pic.twitter.com/9AIRQCzkNd
— The Telegraph (@Telegraph) April 19, 2018

Meghan looked sensational in an elegant LBD tonight. This is one of her best looks since the engagement announcement for me; understated, chic and perfect for the occasion. Meghan's dress is the Black Halo Jackie O Belted Dress (with thanks to the amazing UFO No More team). 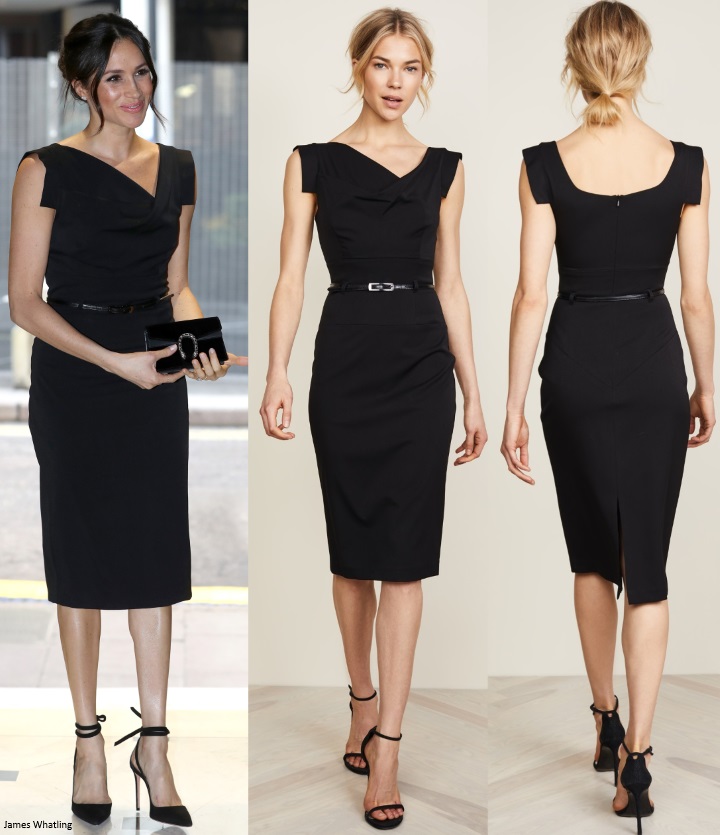 The $375 style is available at Black Halo, Saks Fifth Avenue, ShopBop, Amazon and Spring. For those in the US, you can avail of a $75 discount at Bloomingdales with code SAVEMORE. 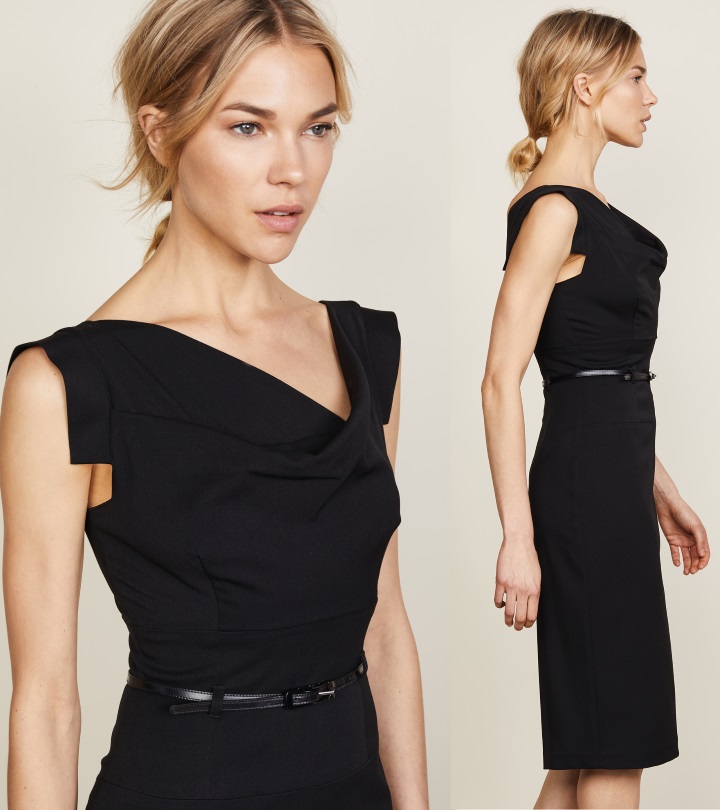 More from the product description:


The dress in red and blue. 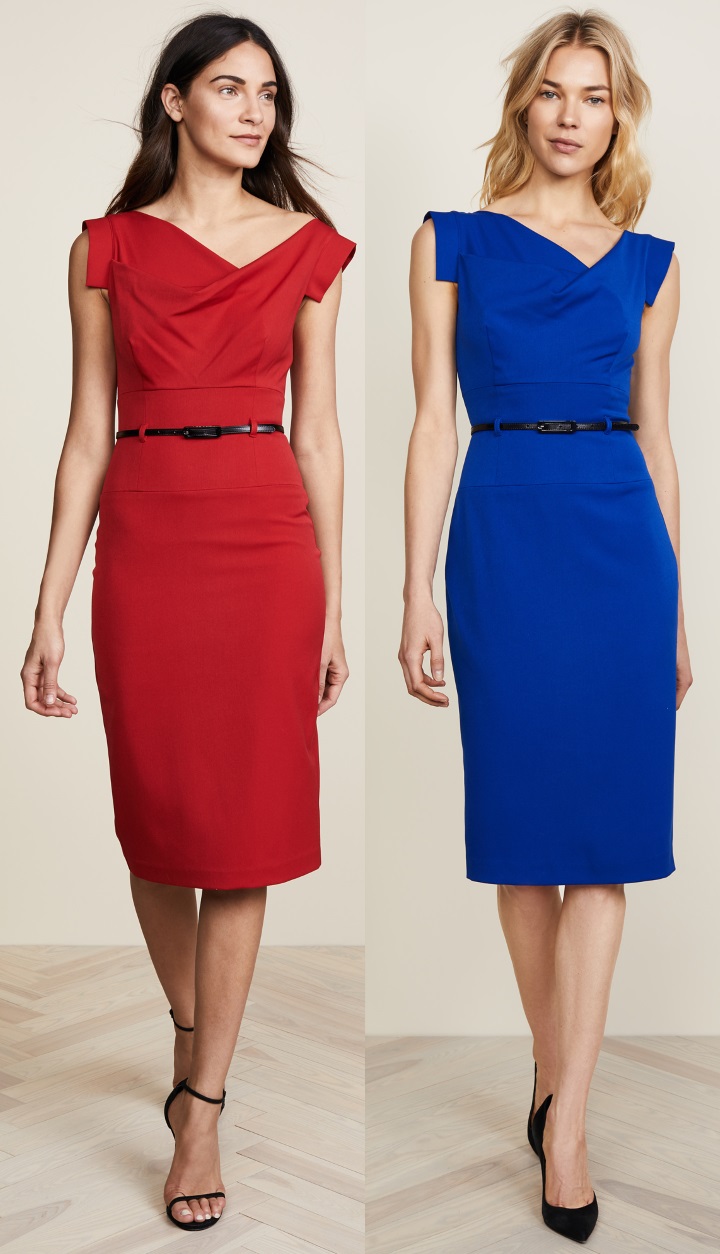 The Jackie O is very much a staple at the Los Angeles based brand. The celebrity favourite has been worn by Blake Lively, Tyra Banks and Katherine Heigl. Founder and creative director Laurel Berman discussed its popularity:

'The Jackie O Dress made her debut in our Fall 2006 collection. The dress was an instant hit! “Jackie” could be worn to work, cocktails and dinner afterwards! From everyday working women to Hollywood celebrities, everyone loved the flattering fit. My design philosophy has always been to make women feel 2” taller and 5lbs thinner when slipping into a Black Halo dress.

Like the woman she was named after, the dress became a modern classic. As the Black Halo brand had become synonymous with style and fit, the Jackie O Dress is the embodiment of the brand.'


Below, the dress in Polka-Dot Print and a look at the 3/4 Sleeve version. 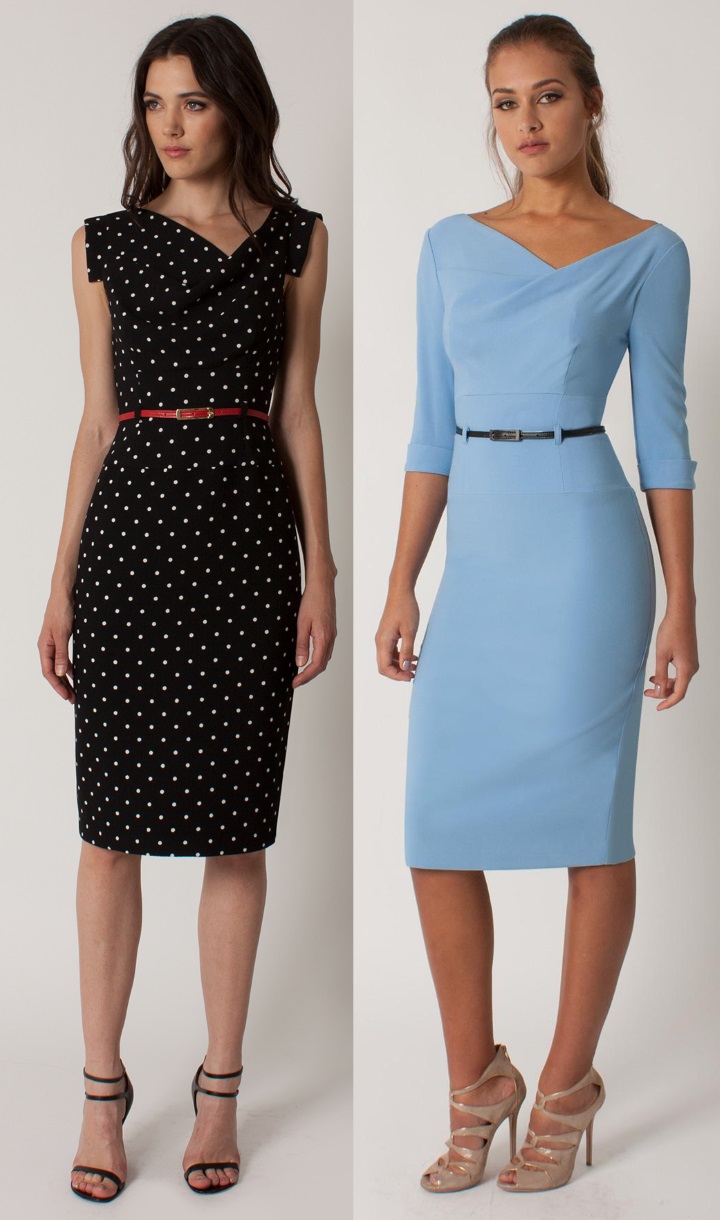 Meghan's gorgeous shoes are the Aquazzura Milano 105 Suede pumps (with thanks to Perth Fashion). They retail for $750 at My Theresa. 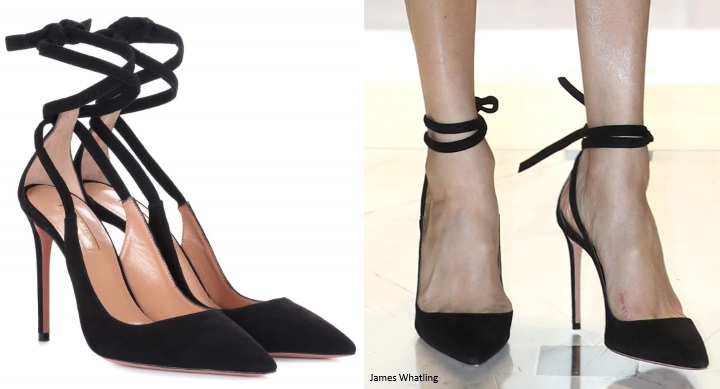 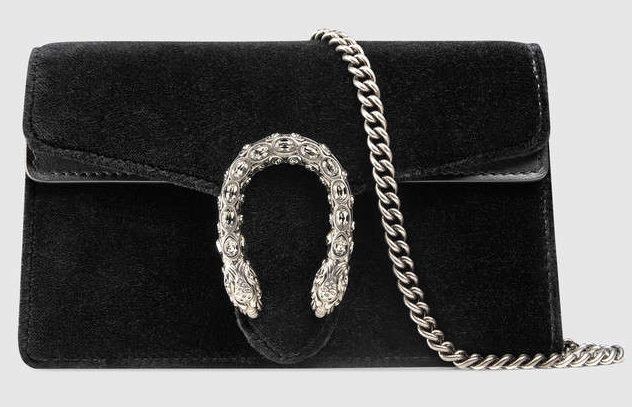 Also today, Harry and Meghan made the Time 100: Most Influential People of 2018 List. Reporter Simon Perry shared a peek inside. 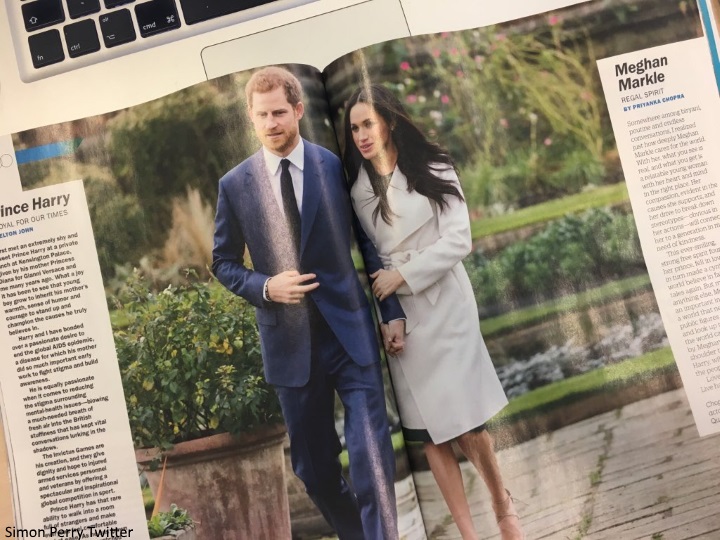 'Somewhere among biryani, poutine and endless conversations, I realized just how deeply Meghan Markle cares for the world. With her, what you see is real, and what you get is a relatable young woman with her heart and mind in the right place. Her compassion, evident in the causes she supports, and her drive to break down stereotypes—obvious in her actions—will connect her to a generation in much need of kindness.

This ever-smiling, strong free spirit found her prince, fell in love and in turn made a cynical world believe in fairy tales again. But more than anything else, Meghan is an important influencer in a world that needs strong public figures to respect and look up to. People the world can be inspired by. Meghan, standing shoulder to shoulder with Harry, will be a princess for the people.

Love always, my friend. Live happily ever after.'

'I first met an extremely shy and sweet Prince Harry at a private lunch at Kensington Palace, given by his mother Princess Diana for Gianni Versace and me many years ago. What a joy it has been to see that young boy grow to inherit his mother’s warmth, sense of humor and courage to stand up and champion the causes he truly believes in.

Harry and I have bonded over a passionate desire to end the global AIDS epidemic, a disease for which his mother did so much important early work to fight stigma and build awareness.

He is equally passionate when it comes to reducing the stigma surrounding mental-health issues—blowing a much-needed breath of fresh air into the British stuffiness that has kept vital conversations lurking in the shadows.

The Invictus Games are his creation, and they give dignity and hope to injured armed services personnel and veterans by offering a spectacular and inspirational global competition in sport.

Prince Harry has that rare ability to walk into a room full of strangers and make everyone feel comfortable and at ease. As he has grown in maturity, I have watched him take on these causes with the remarkable skill to see and communicate how it truly feels for the people he is trying to help.'

On Saturday, Harry and Meghan will attend a reception hosted by The Hon Malcolm Turnbull, Prime Minister of Australia, and Ms. Lucy Turnbull, celebrating the forthcoming Invictus Games Sydney 2018. It is also very likely Meghan will join Harry for the Queen's Birthday Party concert at the Royal Albert Hall. The event will include a special speech from Prince Harry. The concert begins at 8 pm and will be televised on BBC1.
Posted by Admin at 4/19/2018