Ahead of tonight's closing ceremony, the Duke and Duchess of Sussex spent the afternoon at the wheelchair basketball finals at the Quay Centre. 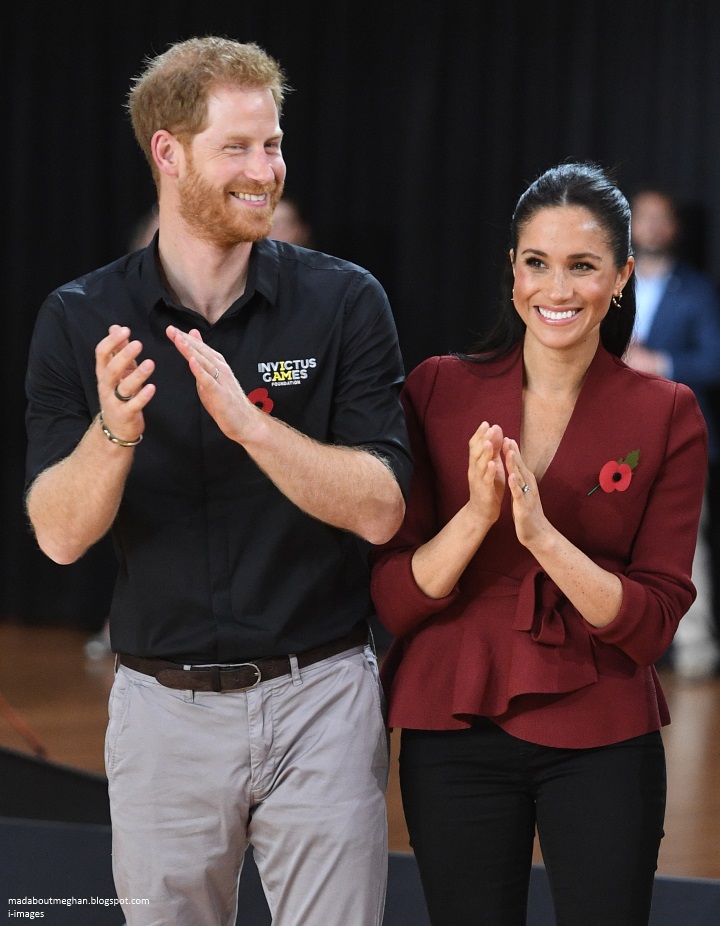 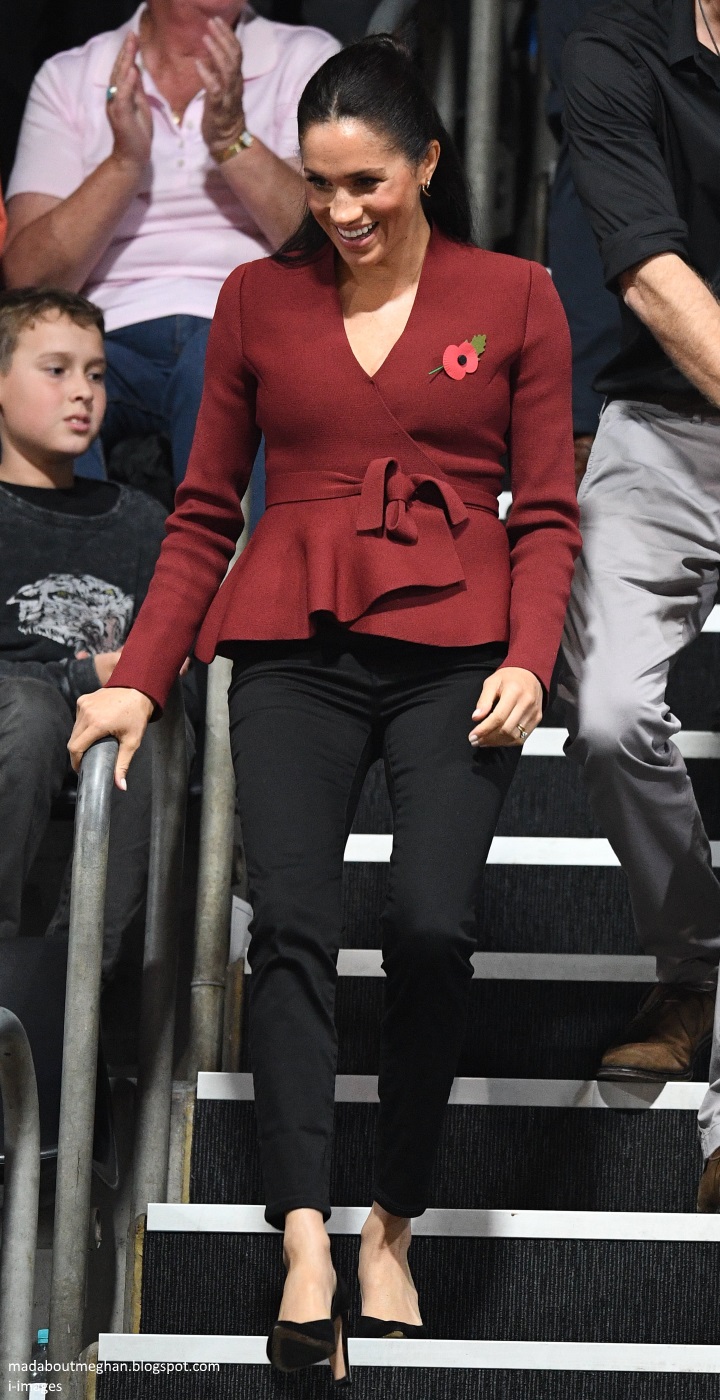 People reports: "England won third in bronze medal match against New Zealand while the Netherlands and the U.S. competed in the gold medal game. The parents-to-be, who were greeted by attendees with a roaring applause, were seated with Prime Minister Scott Morrison and Defence Minister Christopher Pyne." 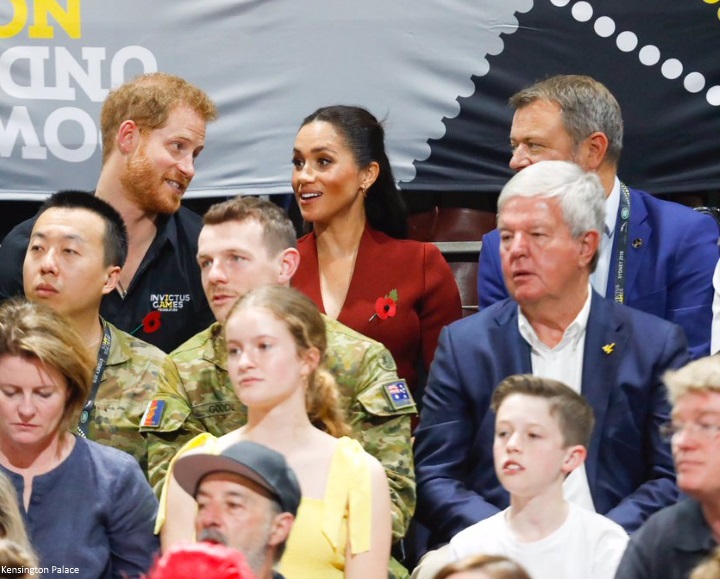 The Sydney Morning Herald reports Harry and Meghan sat with the crowd rather than the VIP area:

'Instead of joining the Prime Minister, Defence Minister Christopher Pyne and the Beckhams in the VIP area, the young royal couple instead chose to sit on the other side of the court, along with military men and women in uniform, to watch the wheelchair basketball finals. Surrounded by servicemen and women in army camouflage fatigues, the crowd roared in support of the servicemen, many of them amputees injured in war, as they fought it out on the court.'


The game marked the final sporting event of Invictus Sydney. 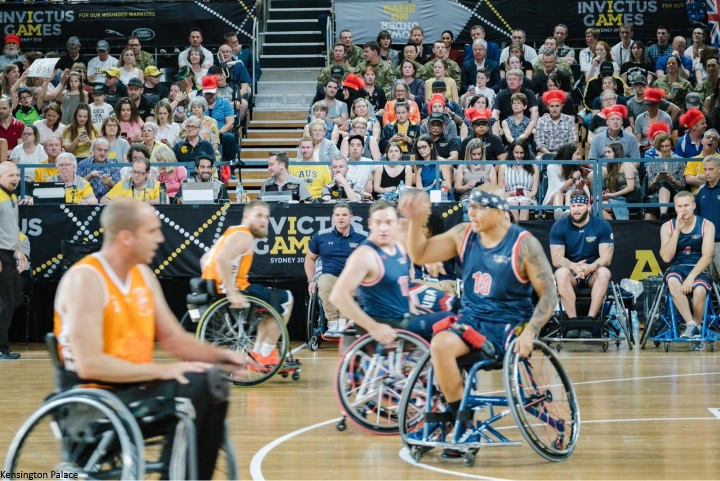 As the Invictus Games draw to a close in Sydney, Prime Minister Scott Morrison has announced a suite of initiatives to recognise Australian veterans including a discount card and lapel pin. More from 9 News:

'The government will also develop an Australian Veterans' Covenant, similar to the UK model, which would be enacted in legislation as a promise of respect and support. Mr Morrison said Australia has a "great culture" of high regard for veterans.

"These measures we have announced today are all about continuing to honour their sacrifice, not just when it is made on the field, but when the sacrifice means they are still hurting when they are coming back and supporting their families." He said the response so far from businesses to the card, which will come into effect early next year, has been "fantastic".'


Invictus Ambassador David Beckham cheered on competitors at the event. Speaking about his role at the Games, he said: “Invictus Games, it’s such a special thing that’s been created for so many special people and to be ambassador for this one in Sydney is something I’m very proud of."


Harry and Meghan presented medals after the match. 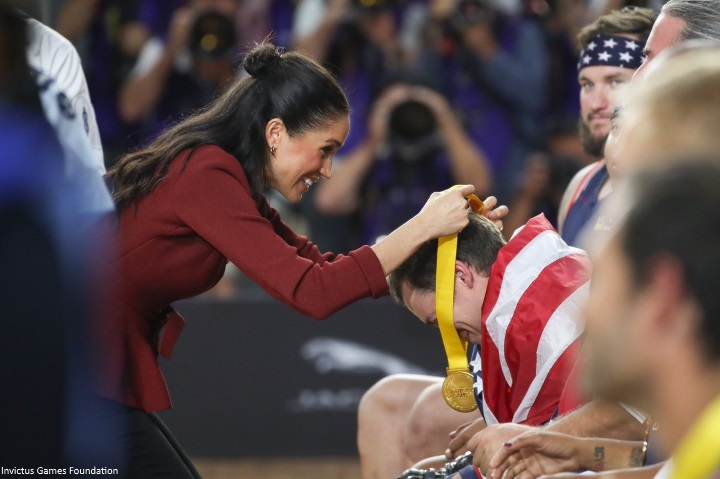 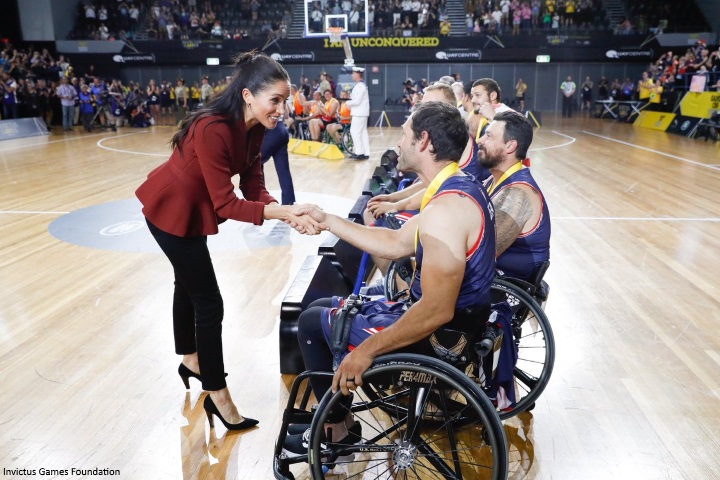 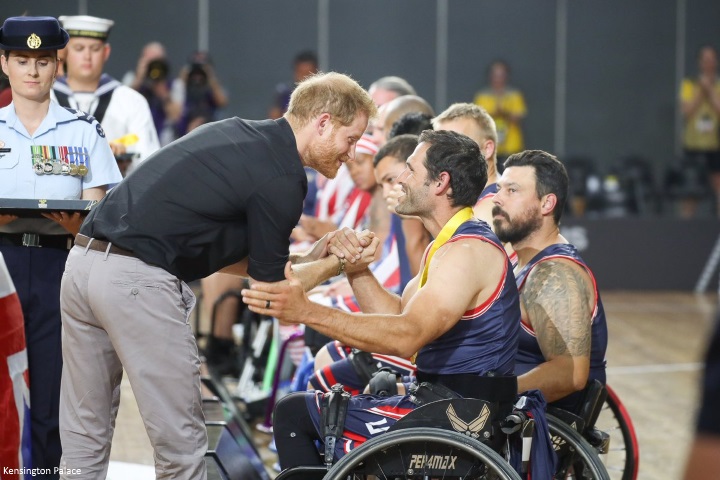 A kiss from a member of the Netherlands team. 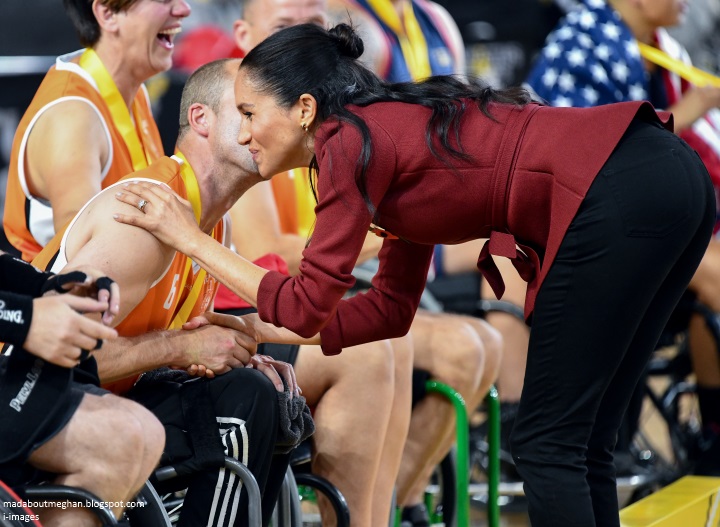 The Sydney Morning Herald writes: "A tear-jerking moment occurred after the awards ceremony, when Isabella Vera, daughter of American special forces sergeant and Invictus gold medallist George Vera from Land O’Lakes, Florida, ran onto the court and into the lap of her father. The crowd roared as she gave her father a hug and burst into tears."

A video from Kensington Palace.


🏀Congratulations to everyone that competed in the @InvictusSydney Wheelchair Basketball! #IG2018


The Invictus Games Foundation shared a photo of Harry meeting UK Wheelchair Basketball competitor Paul Guest outside the changing rooms. I have no doubt the Prince is incredibly excited to celebrate the achievements of all participants throughout the games tonight at the closing ceremony. 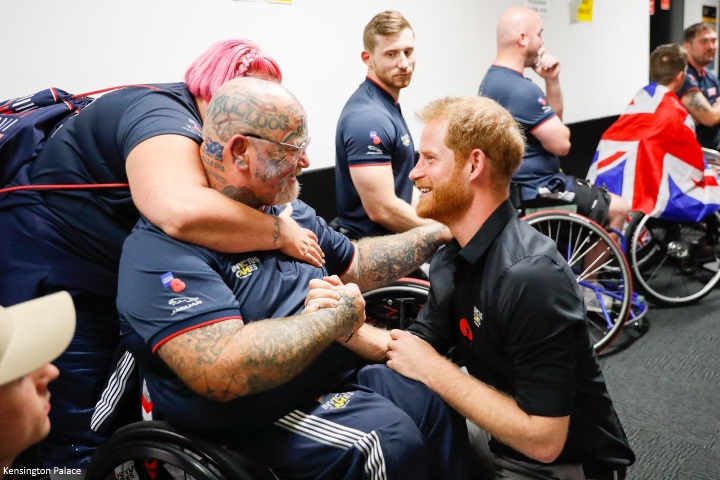 The Duchess wore the Crepe Knit Wrap Jacket by Australian brand Scanlan Theodore (with thanks to Heaven). The label is a favourite of Princess Mary of Denmark's. the $550 jacket features a wrap front, waist tie and ruffled hem. 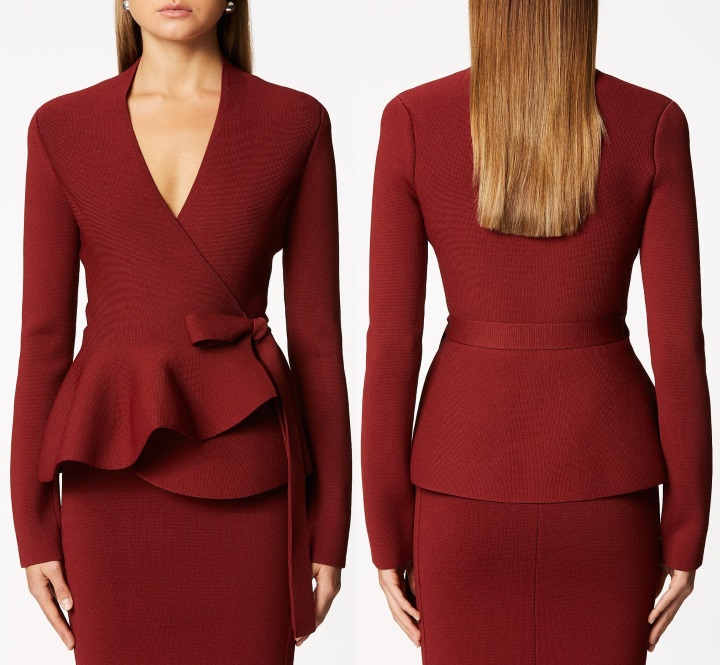 I love the garnet shade of the jacket. 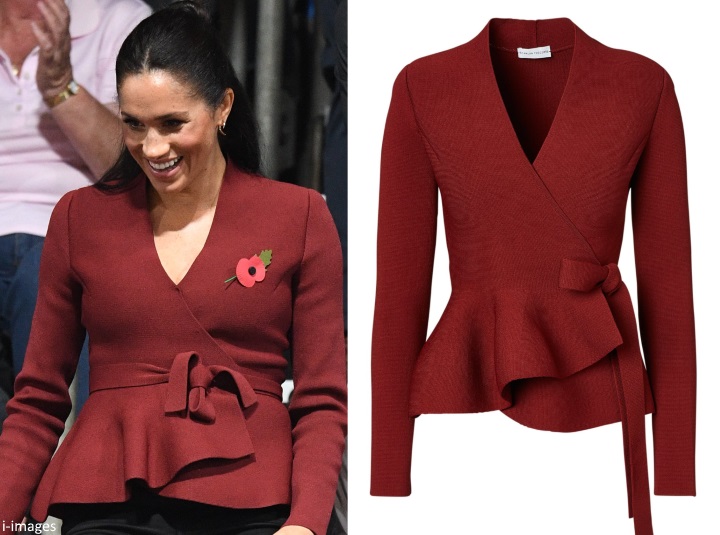 More on the background of Scanlan Theodore:

'Scanlan Theodore is a women’s fashion and accessories brand offering a range of ready-to-wear, handbags, and footwear.  Scanlan Theodore was founded in Melbourne, Australia in 1987.

For over 25 years women have embraced Scanlan Theodore’s modern elegance and independent spirit as their very own. Synonymous with intelligent well-crafted designs, Scanlan Theodore’s devotion to simple, clean, modern aestheticism has not changed since its inception in 1987. The labels dedication to independent beauty is infused in each Scanlan Theodore creation, defining a new genre of femininity. The Scanlan Theodore woman is confident, intelligent and complex – for it’s all the layered facets of life that make a design, an image and indeed a woman, a timeless beauty of memorable quality.'


Both Harry and Meghan wore their poppies ahead of Remembrance Day next month. 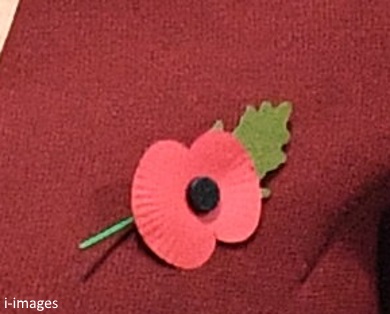 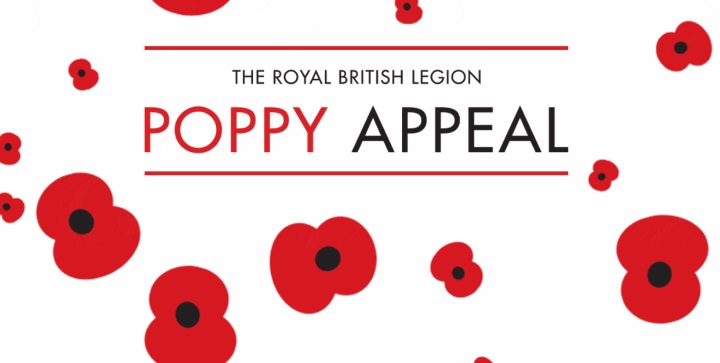 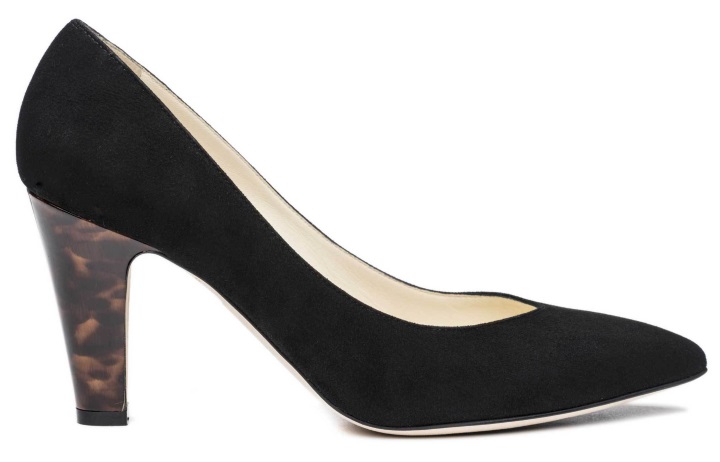 And accessorised with her Shaun Leane Talon earrings. 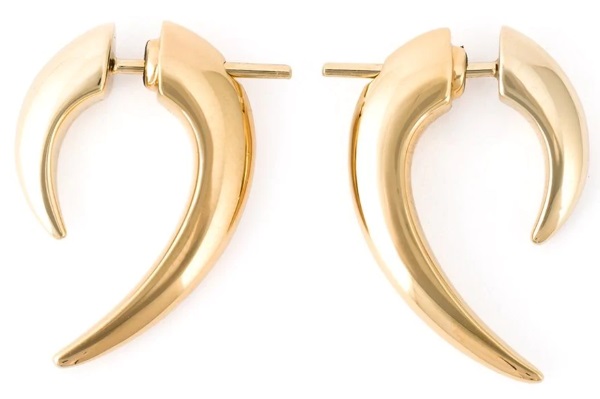 We'll see the Duke and Duchess at the Invictus Games Closing Ceremony tonight. Kensington Palace shared a photo taken by Meghan of Harry rehearsing his speech. 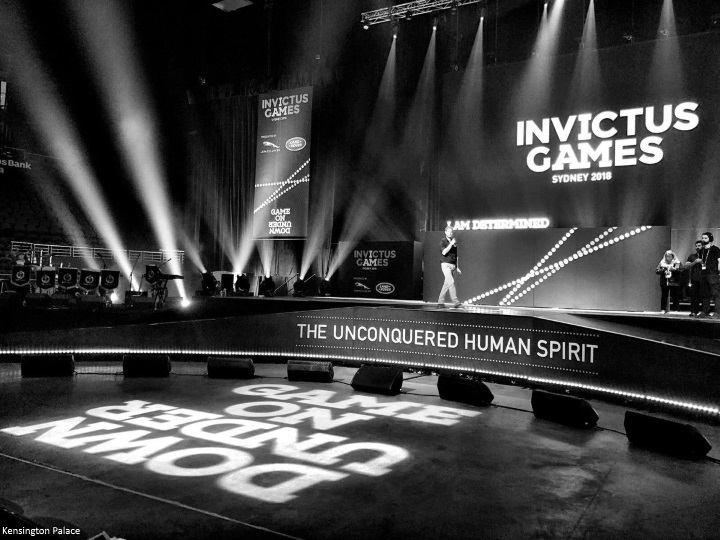