It was a night of celebrating courage and admirable achievement for the Duke and Duchess of Sussex at the Endeavour Fund awards tonight. 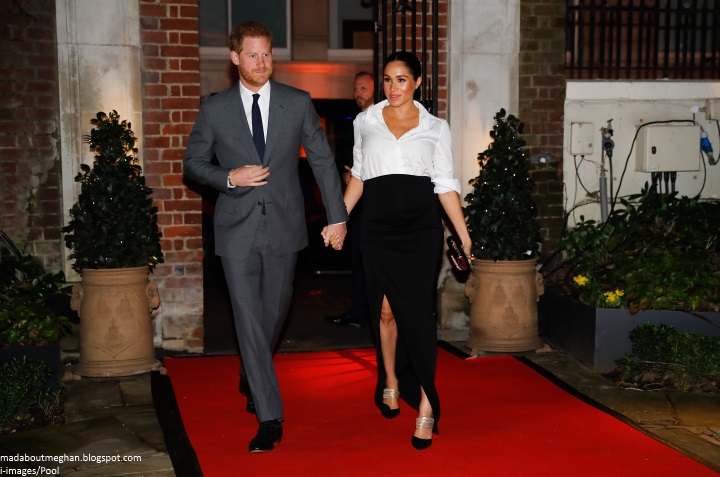 The couple walked the red carpet amid a sea of camera flashes. 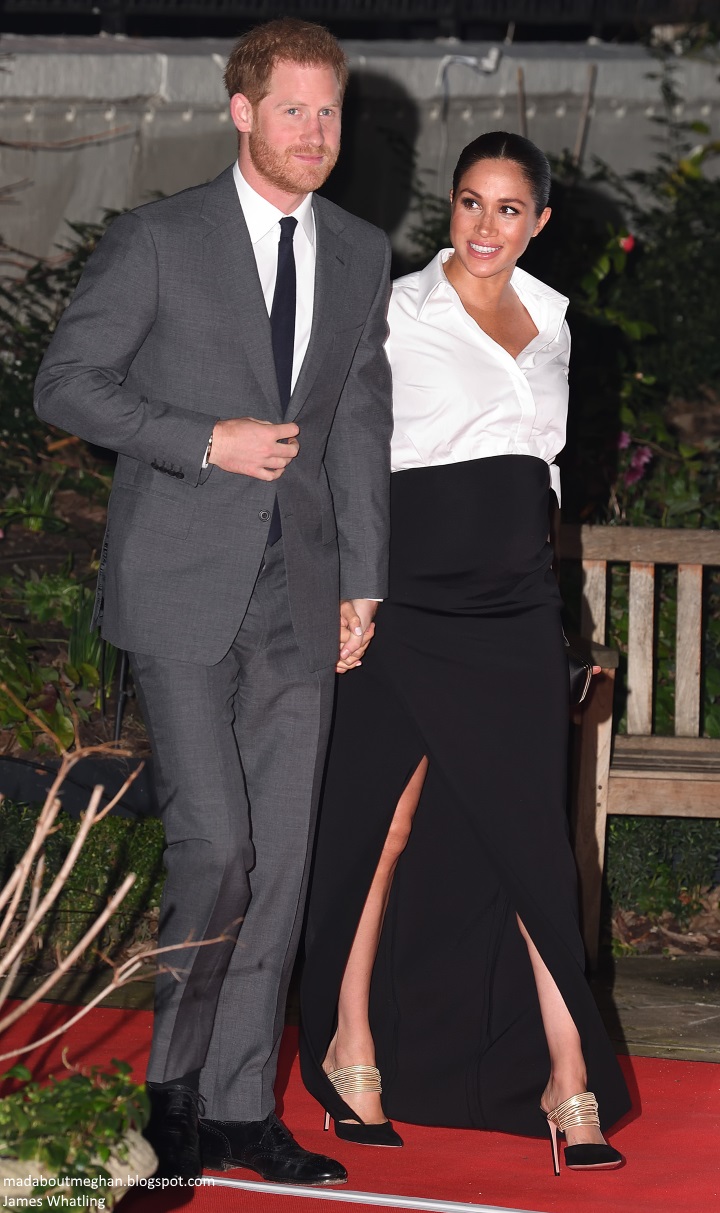 The scene at Draper's Hall. 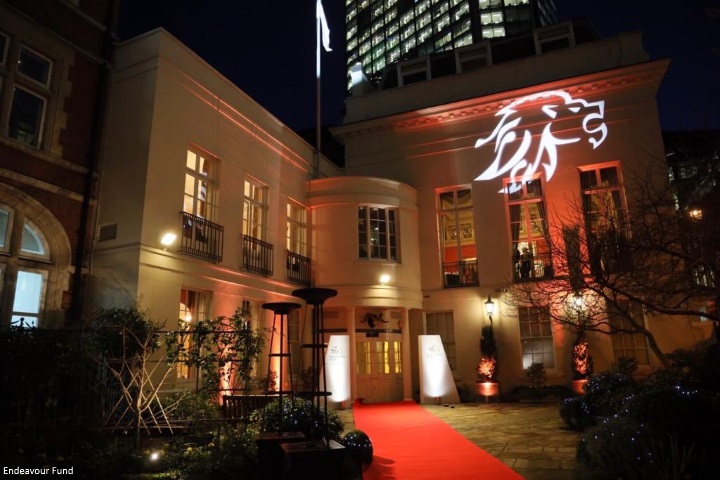 In 2012, the Royal Foundation created the Endeavour Fund. The Fund offers seed funding for sporting and adventure challenges and helps emerging initiatives with advice, hands-on support and mentoring. The fund plays an important role in ensuring that more servicemen and women have the opportunity to rediscover their self-belief and fighting spirit through physical challenges. It aims to help those that are hard to reach and to support activities that contribute to the participants’ recoveries - either through mentorship, qualifications or work opportunities. As Patron of the Fund, Harry has launched a series of programmes and events in their support. In November 2013, Prince Harry joined one of three teams of wounded servicemen and women to trek to the geographic South Pole for the Walking with the Wounded South Pole Allied Challenge. 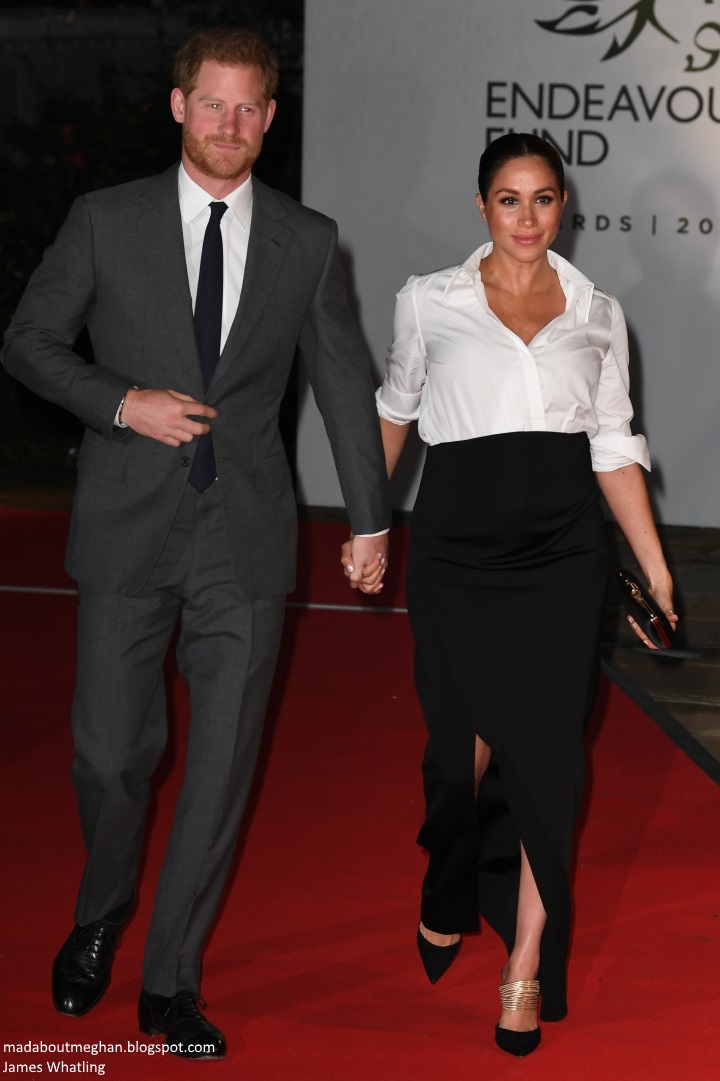 The Endeavour Fund Awards have become an annual calendar event for Harry, and now his wife too.  The awards celebrate the achievements of wounded, injured and sick servicemen and women who have taken part in remarkable sporting and adventure challenges over the last year. Meghan joined Harry at the awards last year and once again she's been involved in the process all the way. In January, she and Harry attended the judging for the awards privately. 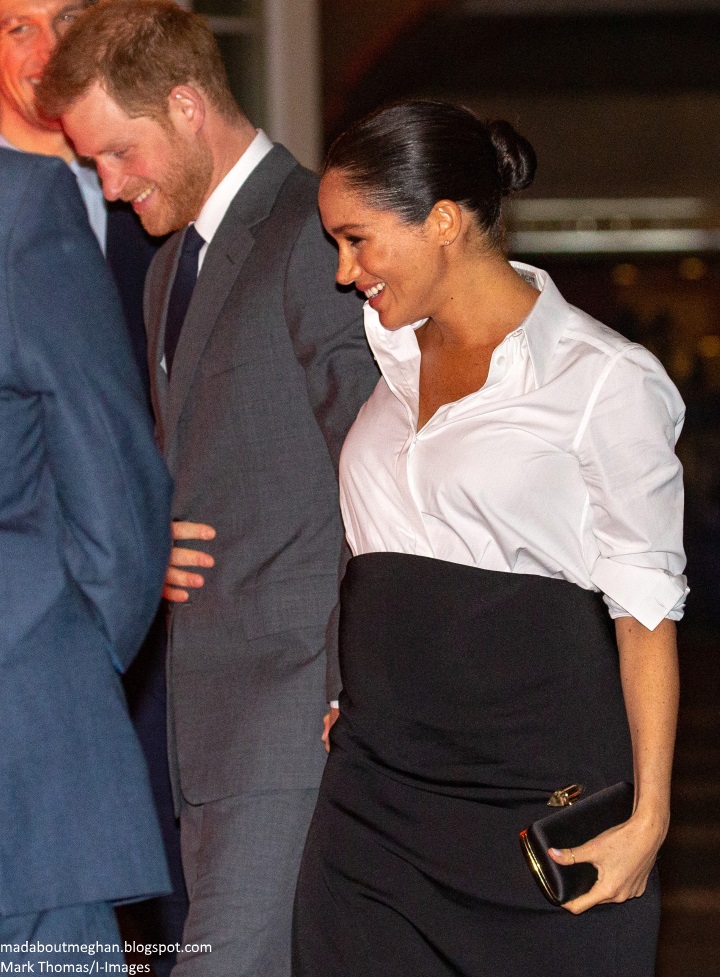 Harry and Meghan first joined a pre-ceremony reception where they met the inspiring nominees, as well as endeavour participants and key supporters of the Endeavour Fund. 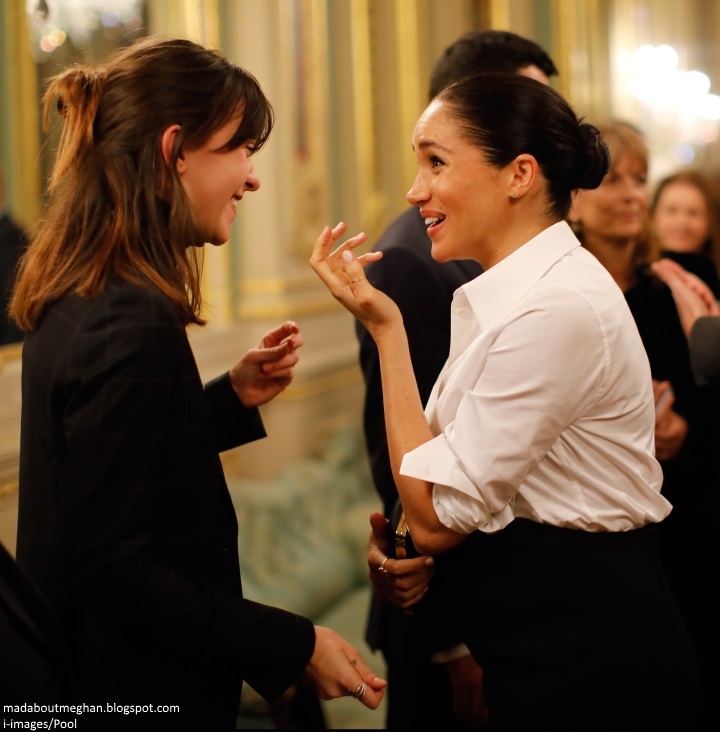 Whilst chatting to guests reporters heard Harry say: "There's one heavy baby in there." Meanwhile Meghan told invitees Harry's going to be "a great dad". 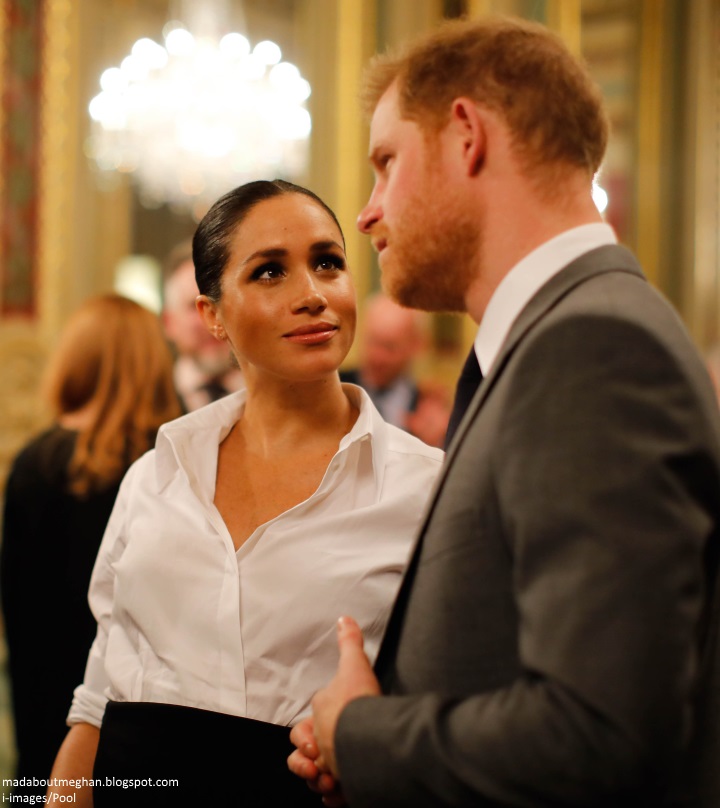 A guest asked Meghan if she knows the baby's gender. She said they didn't: "It's one of those things, no matter what it is, it's still going to be a surprise." 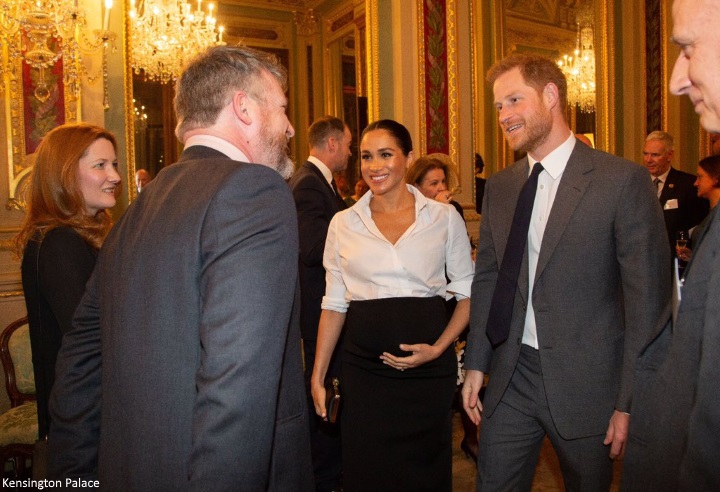 The video below features footage from the arrival and reception.


Then it was time for the awards. 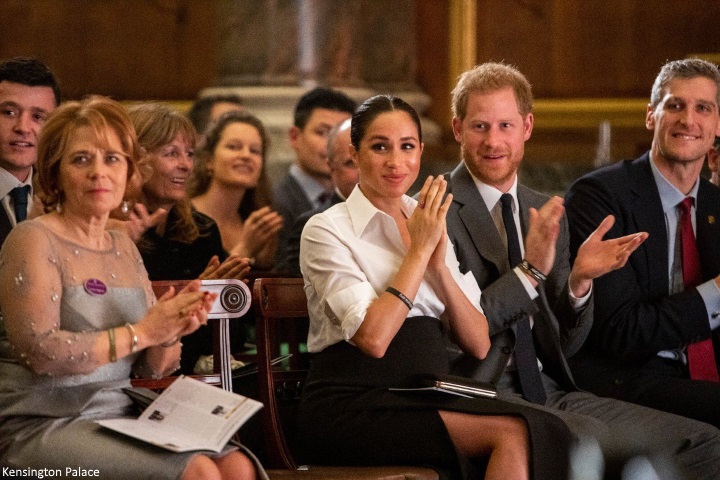 They were hosted by Ross Kemp. More from the Mail Online:

'Host for the evening was Ross Kemp, the actor and documentary maker. He said he spoke to the couple about their new Labrador puppy. Describing Meghan as 'stunning,' he added: 'We talked about how they've got a puppy and we got a puppy before we had our first boy. It's a preparation for nappy changing and pooping basically.

Kemp looked emotional as Harry praised him for his documentaries he made about soldiers fighting in Afghanistan in 2008-9. 'He said it changed public opinion in terms of the sympathy towards the soldiers in the ground,' the actor said.

He was saying it helped bring awareness. It was actually nice to be banked by someone like him who's been there himself and seen and done it. If you look at A-listers in the world there probably aren't many bigger than those two. They are down to earth, very warm, very decent human beings who care. They could potentially be a massive catalyst for great change not just in the UK but around the world.'


Meghan took to the stage to present the Celebrating Excellence Award. 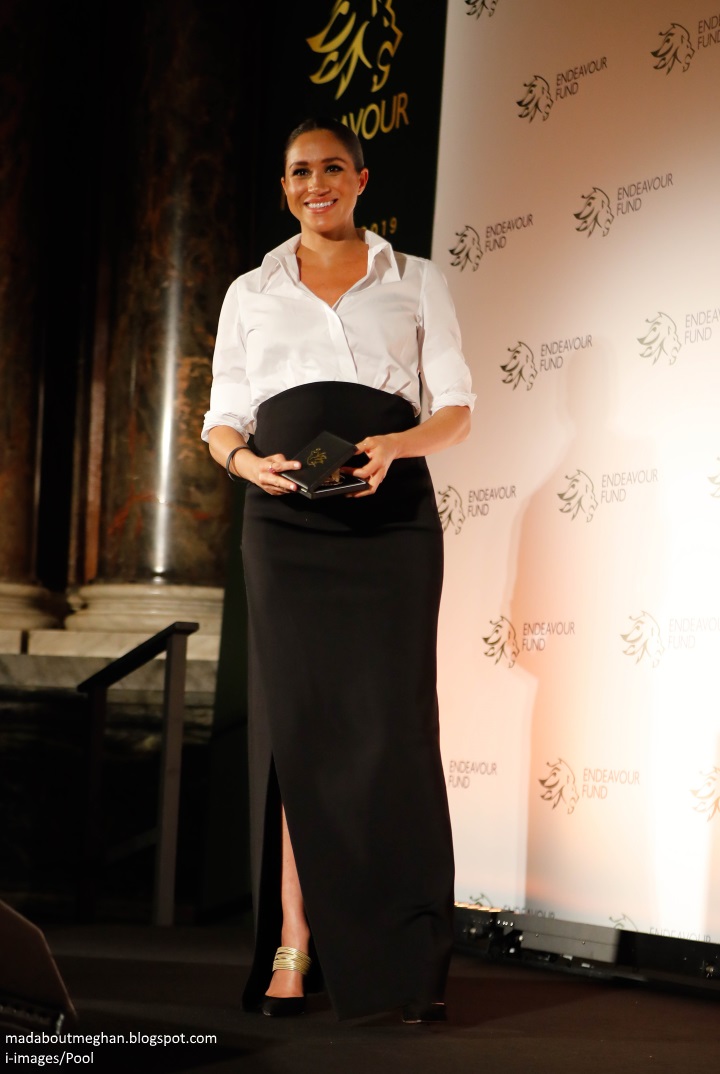 Addressing the audience she said: "I'm so, so grateful to be back. Last year was my first time coming and it was such a meaningful night. Before the reception Harry and I were talking to all the nominees and in speaking to one of them he said, you know after I mentioned to him, 'Gosh the impact you guys make is huge. It's so much bigger than you.' No it's not about us, it's the ripple effect. And, in true modesty of all the nominees; yes it is about the ripple effect. What I admired in him - and I feel is true about all the nominees - is you don't have that ripple effect unless each of you is brave enough to make that first wave. It's so important to remember that because what you're doing is inspiring so many people - so thank you from all of us for being that inspiration." 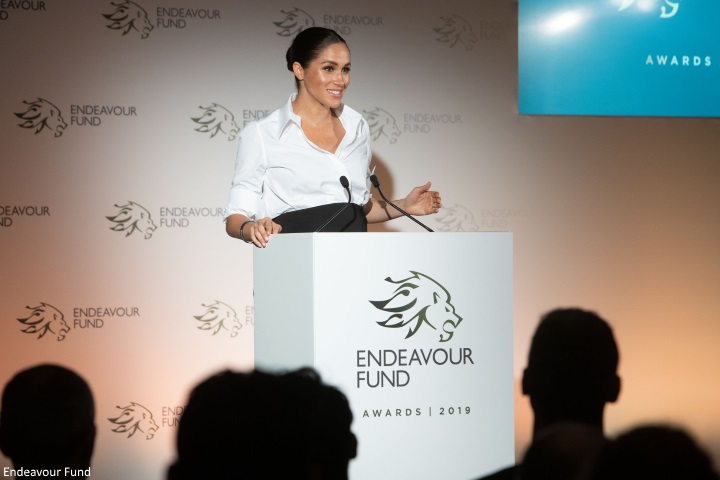 
The award is given to an individual who has endeavoured to achieve excellence in their chosen sport or adventure challenge. This year's chosen winner was Nathan Forster.

I was very interested to read a tweet from Lizzie Robinson revealing Nathan already has a special royal connection. Harry gave up his seat in a Spitfire during the Battle of Britain 75th anniversary flypast when Nathan had a technical issue with his aircraft. Lizzie said Harry was "adamant" Nathan should take his place. 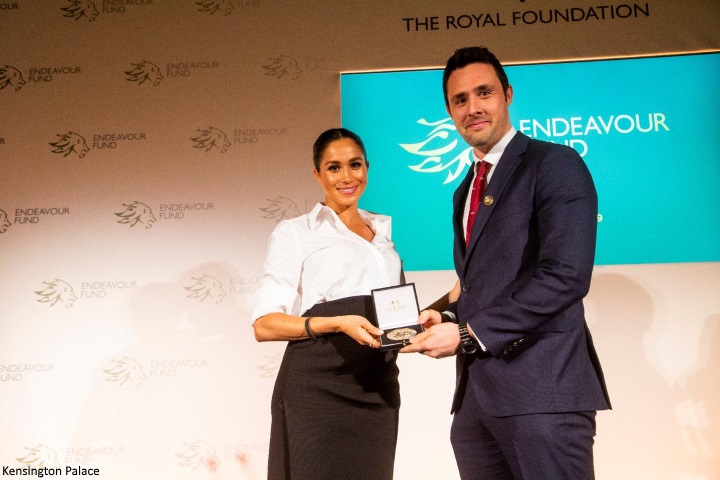 Nathan was badly injured in Afghanistan in an IED blast that ended his military career. In just five years, he's gone from having no flying experience to a commercial airline pilot with the help of organisation Flying for Freedom.


Nathan Forster was badly injured in Afghanistan in an IED blast that ended his military career.

With @Fly2Pole, Nathan has gone from having no flying experience to becoming a commercial pilot. #EndeavourFundAwards pic.twitter.com/rC9OLvORlw
— Kensington Palace (@KensingtonRoyal) February 7, 2019


Prince Harry presented the Henry Worsley Award to Shaun Pascoe. It is awarded to the individual who has best inspired others through the demonstration of determination in the face of adversity, whilst endeavouring to support others with their recovery through sport or adventure challenge. 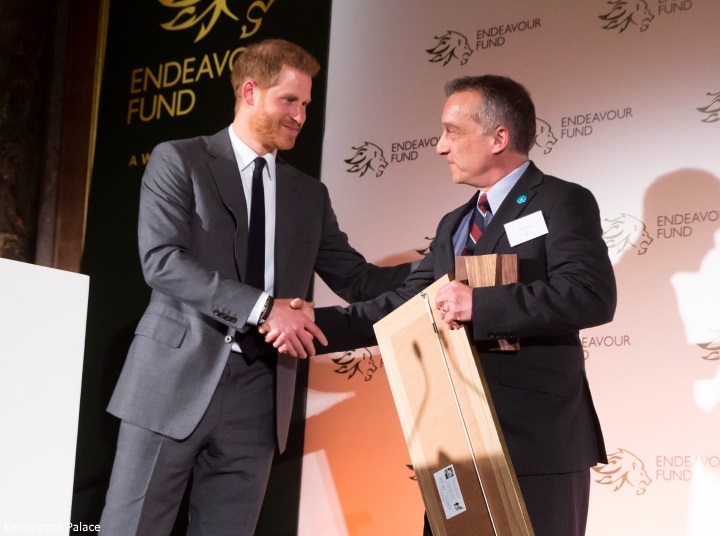 Shaun Pascoe was diagnosed with Post Traumatic Stress after numerous tours around the world with the Royal Air Force. He set up the sailing charity Turn to Starboard, providing more than 1,200 sailing opportunities to service personnel and veterans.

Shaun Pascoe was diagnosed with Post Traumatic Stress after numerous tours around the world with the @RoyalAirForce.

The Henry Worsley Award is named after the late Henry Worsley, who tragically lost his life in January 2016 whilst attempting to cross the Antarctic landmass, solo and unsupported. Henry, a career soldier and an experienced polar adventurer, undertook this incredible expedition in order to raise money for the Endeavour Fund. 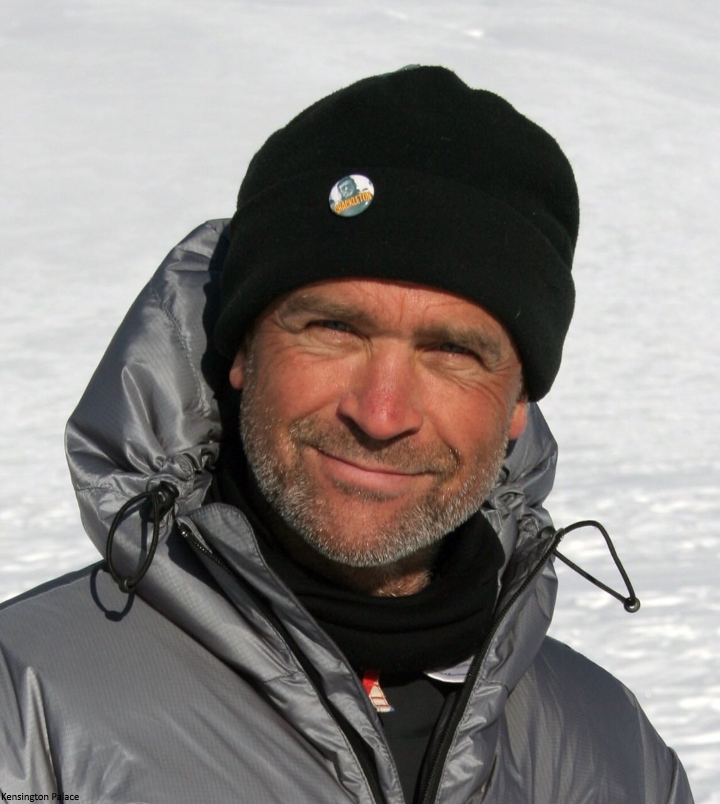 The award for Recognising Achievement went to the inspirational Kelly Ganfield for her success during the Invictus Games. 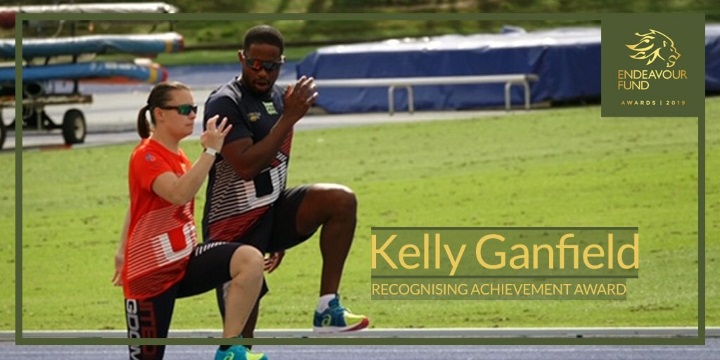 'Your Royal Highness, you're absolutely amazing in acknowledging many of us soldiers,' Ms Ganfield said. 'And the Duchess of Sussex— you've got all this to come.

Earlier, Ms Ganfield met the couple at the reception when Harry had teased her and her running guide Mikael Huggins as he had watched her race in the Invictus Games. 'He said that Mikael slightly slowed me down and we giggled about that,' she said.

'He met me in Bath for the trials with Meghan. She is a total asset to the British public and nation.' She is going to be a mother soon and — yet again from the trials — she saw my daughter Bethany who was two at the time. She is now three. Bethany gravitated to her and [Meghan] kind of gravitated to Bethany. She has cerebral palsy. Meghan was amazing with her. And [Harry] was beaming — but he's always like that.'


Harry and Meghan with all the nominees and presenter Ross Kemp. 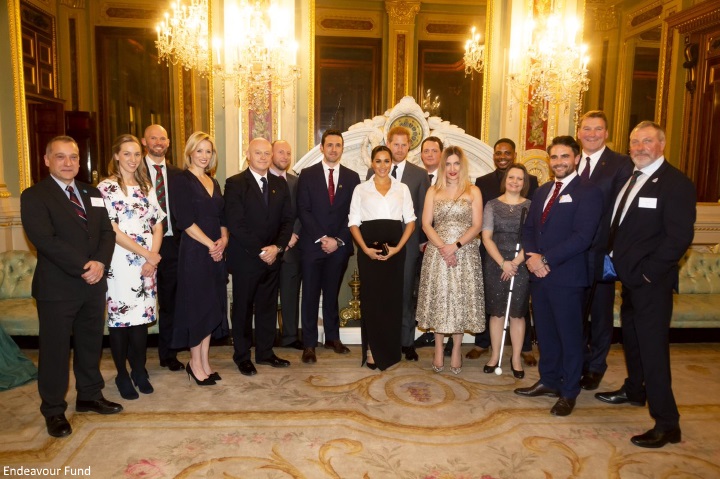 You can watch the awards ceremony in its entirety below. Harry delivered a terrific speech which you can hear one hour into the event: "All of you and your families have proven you have the ability to summon more strength and resilience than anyone else we know."


The Duchess selected a bespoke Givenchy look featuring a crisp white shirt and a long black skirt with a split. The choice has proven a divisive one. I very much like the timeless simplicity of the combination and the continuing fashion relationship between Meghan and the immensely talented Clare Waight Keller. I do, however, agree with those who suggested another element would have been the perfect finishing touch. Perhaps hair worn down with a pair of statement earrings?

The classic white shirt and long evening skirt has been a style staple for decades. From Meghan's style icon Carolyn Bessette-Kennedy to Carolina Herrera (we see one of her designs beside a photo of Herrera below) and Queen Letizia, it's a tried and trusted look which can take one to any variety of events. 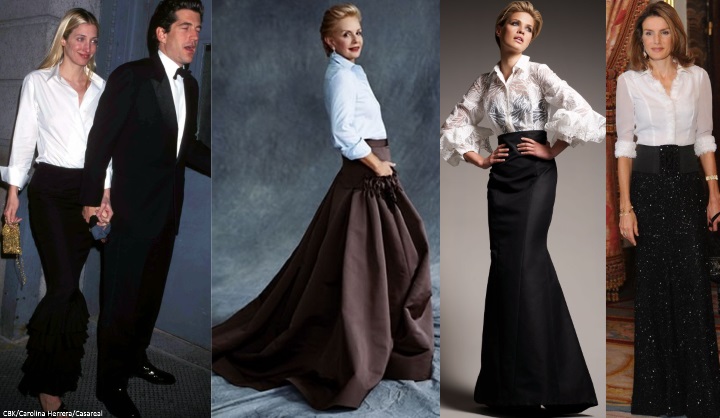 Meghan's eye-catching pumps are the Aquazzura Rendez Vous 105 mules. Described as: "Made in Italy and topped with a thick band of gold leather to keep your feet secure as well as balance the 105mm heel. This pair is designed with a sleek pointed toe for a leg-lengthening effect."

The £530 shoes are available at Net-A-Porter and Rue La La. 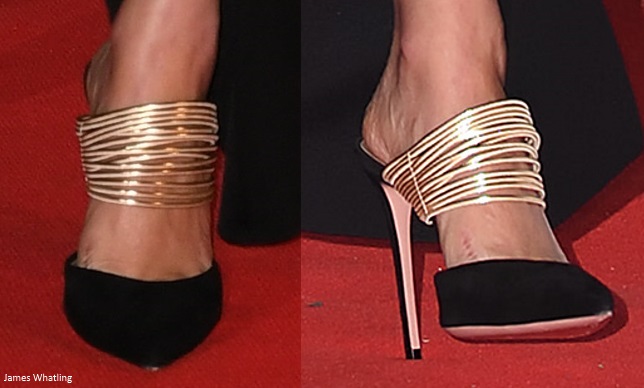 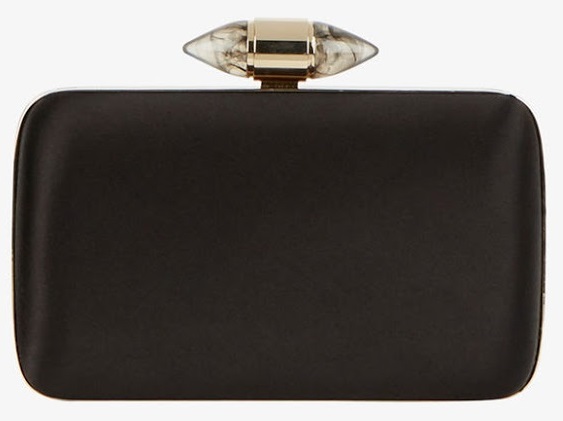 Laura identified Meghan's ring as the Ecksand Ruby Cocktail ring. It's a gorgeous shade of pink. Handcrafted in Canada with sustainable materials, the cabochon cut ruby retails for $2,135 CDN. 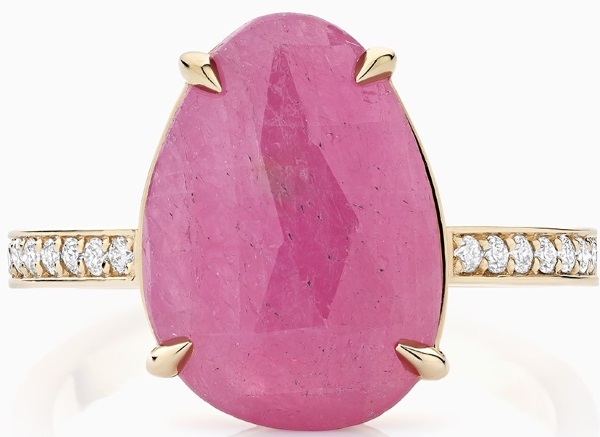 And completing the look, her Vanessa Tugendhast Precious earrings with clover paved diamonds. 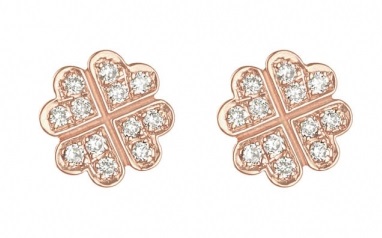 During the ceremony, it appears both Harry and Meghan wore Endeavour Fund bands. 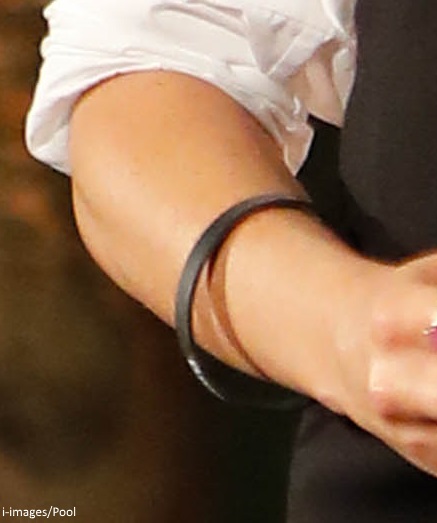 I couldn't close without a sartorial nod of approval for the very dapper Prince Harry. As noted by several readers, his suit choice was on the money tonight!

We'll see the Duke and Duchess on Tuesday evening for a gala performance of The Wider Earth at the Natural History Museum in support of the Queen’s Commonwealth Trust. The Wider Earth is a critically acclaimed theatrical production about the young Charles Darwin’s expedition on HMS Beagle.
Posted by Admin at 2/07/2019