The Duchess in Red Valentino For Casablanca Arrival

The Duke and Duchess of Sussex began a three-day visit to Morocco this evening when they arrived at Casablanca airport for an official welcome. 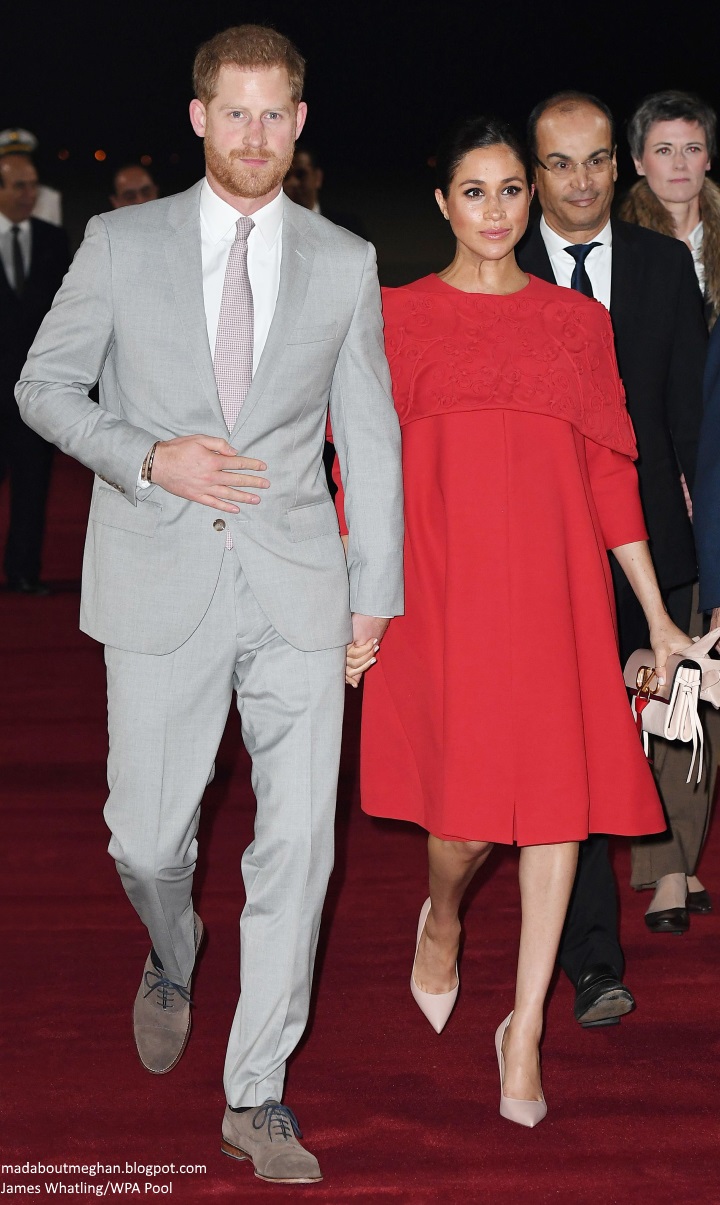 It marks one of several trips abroad the Duchess has made since officially becoming a member of the Royal family nine months ago. Harry and Meghan visited Ireland, Australia, Fiji, Tonga and New Zealand on behalf of her Majesty in 2018, and their visit to Morocco marks their first joint trip of 2019.

The Duchess who is expecting her first child in April is said to be feeling very well and eager to work as close to her due date as possible. Meghan has just returned from a visit to New York where several of her closest friends hosted a baby shower. The Palace told the media "medical provisions have been made" for Meghan in the event she requires care. 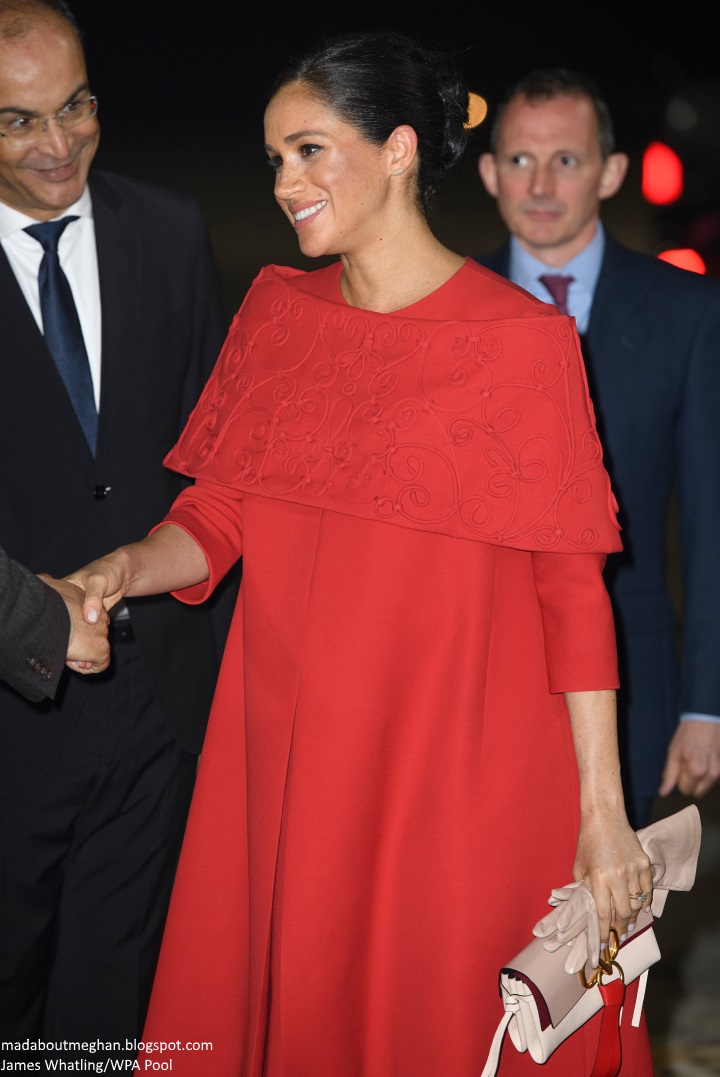 The visit to the North African country comes at the request of the government. Given the tumultuous unfolding of Brexit, we've seen members of the Royal family deployed abroad to lend a touch of "soft diplomacy" to strengthen ties. The Evening Standard reports Prime Minister Theresa May spoke about the "incredible" trading potential during a trade mission to Africa last year: "A more prosperous, growing and trading Africa is in all of our interests and its incredible potential will only be realised through a concerted partnership between governments, global institutions and business. As we prepare to leave the European Union, now is the time for the UK to deepen and strengthen its global partnerships." 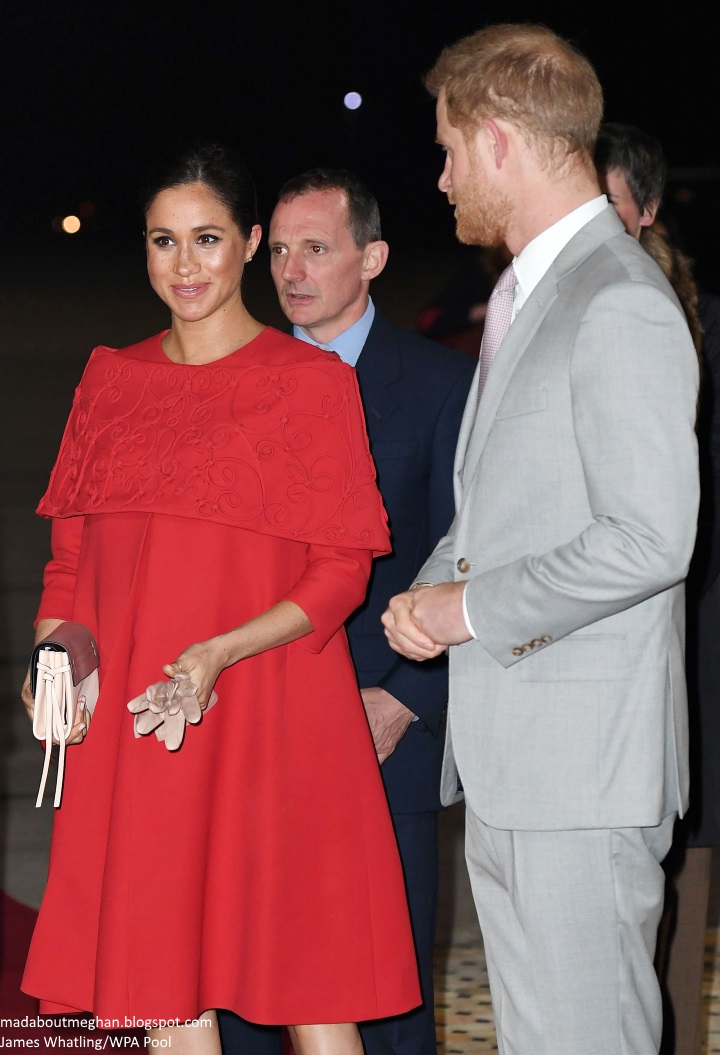 The Duke and Duchess arrived over an hour late, after 9 pm, due to a delayed Royal Air Maroc commercial flight. A team of nine accompanied them, including two assistant private secretaries, three members of the communications team, a digital officer, palace assistant, programme coordinator and a hairdresser. 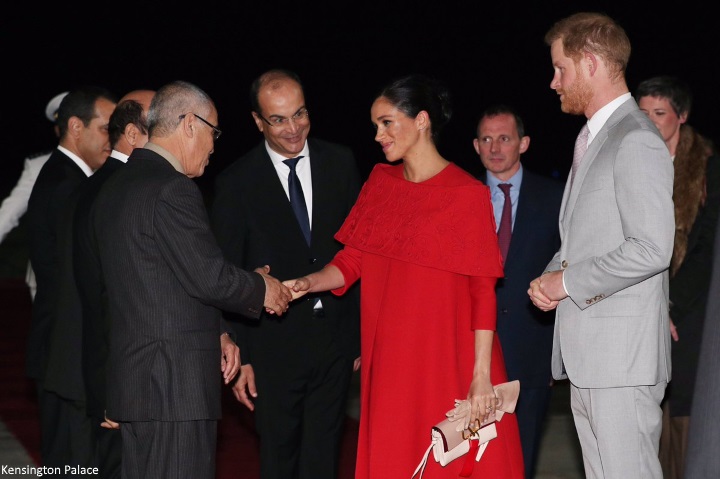 The Duke and Duchess were greeted by British Ambassador to Morocco Thomas Reilly and his wife at the airport. Mr Reilly told reporter Victoria Murphy: "When we began planning for this visit I had a very clear view in my mind of the story we wanted this visit to tell. In a fortunate stroke of serendipity we found the story fits almost identically with interests which are close to Their Royal Highnesses hearts. The Duke and Duchess will be shown the transformational impact of community-based programmes and Morocco’s changing attitudes towards women. There is much more to do in this arena. But it is clear that attitudes are changing fast - as demonstrated by the influential role that women are increasingly playing in modern Morocco’s sporting, social, political, commercial and cultural scenes." Below, the Ambassador standing behind Meghan. 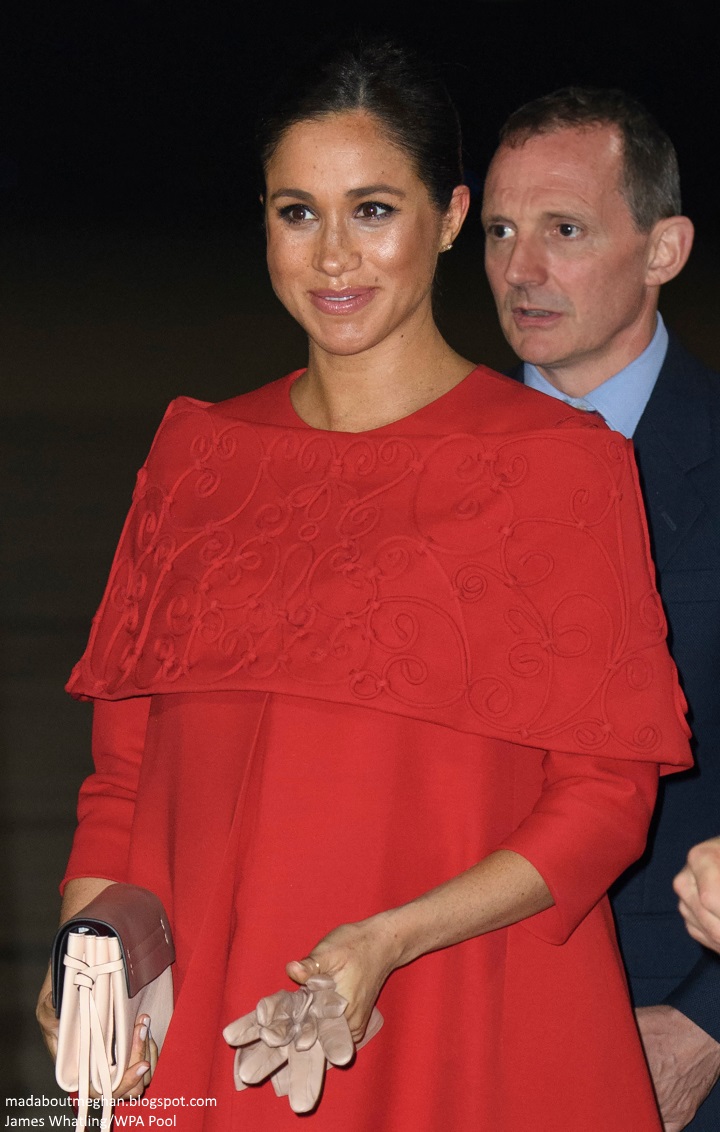 The Ambassador has done an absolutely outstanding job promoting the visit, attending rehearsals and assisting in the organisation of the itinerary in recent weeks.

Mr Reilly was very impressed with Harry and Meghan :) 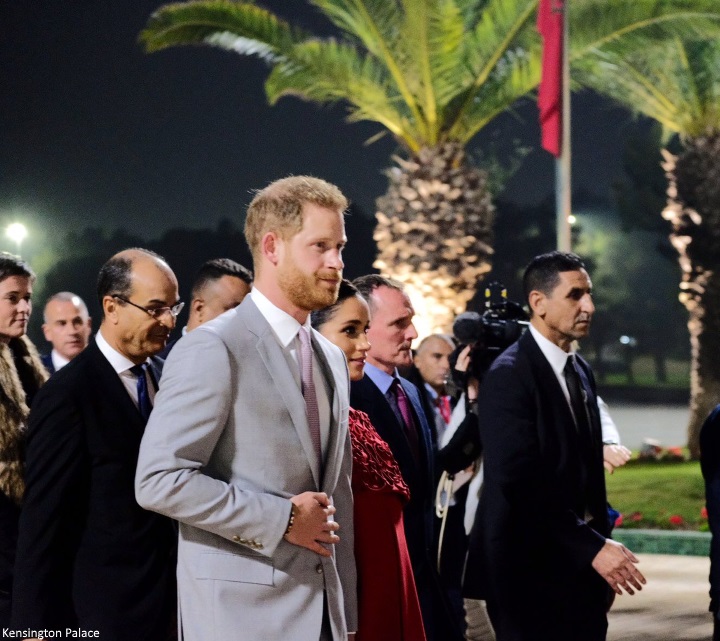 
Casablanca is a modern city by the sea and often the starting point for visitors looking for the cosmopolitan and economic heartbeat of the country. According to Wiki Travel: "The modern city of Casablanca was founded by Berber fishermen in the 10th Century BC and was subsequently used by the Phoenicians, Romans, and the Merenids as a strategic port called Anfa. The Portuguese destroyed it and rebuilt it under the name Casa Branca, only to abandon it after an earthquake in 1755. The Moroccan sultan rebuilt the city as Daru l-Badya and it was given its current name of Casablanca by Spanish traders who established trading bases there. The French occupied the city in 1907, establishing it as a protectorate in 1912 and starting construction of the ville nouvelle, however it gained independence with the rest of the country in 1956." 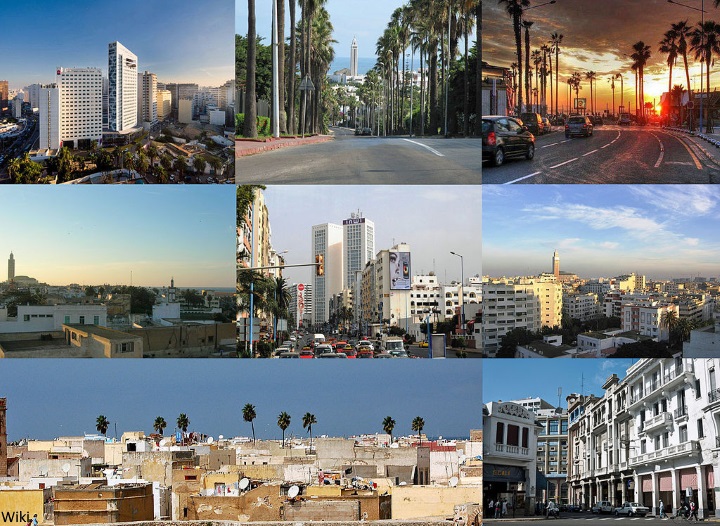 Of course for so many of us, Casablanca will always be synonymous with the 1942 classic romantic movie starring Humphrey Bogart and Ingrid Bergman as former lovers reunited in the city during World War II. Fans of the movie (if you haven't seen it, I highly recommend it as a must-see Hollywood great) may be interested to hear Rick's Café, which was designed to recreate and emulate the café from the movie, opened in the city in 2004. It's one of the go-to places in the city. 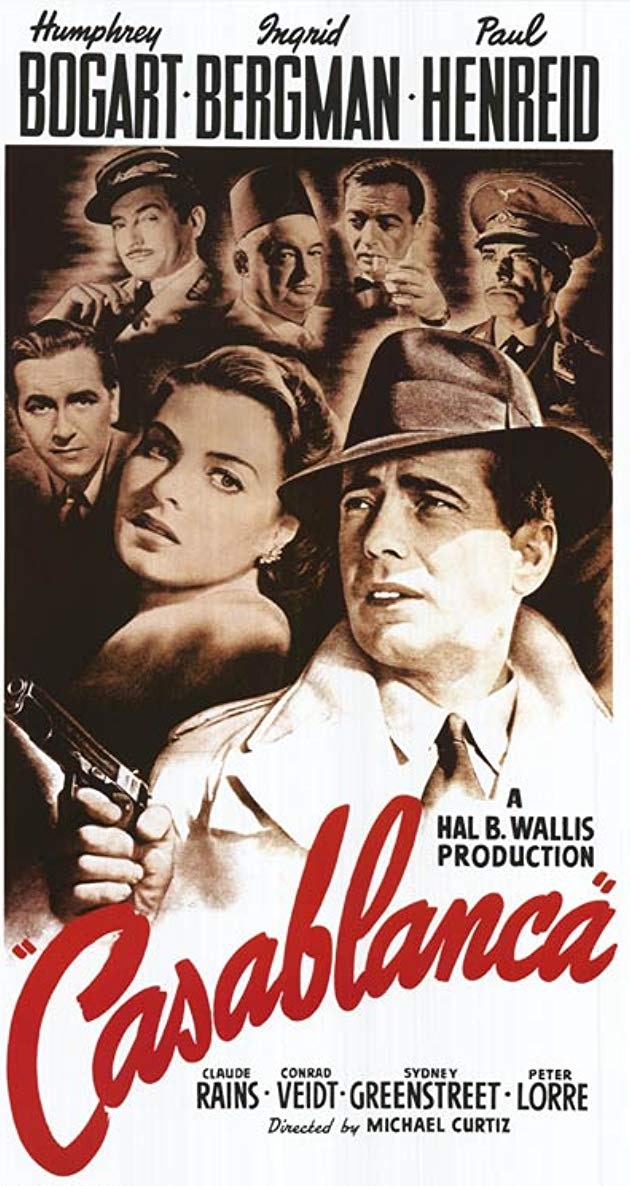 A very sweet shot of Harry and Meghan leaving the airport. 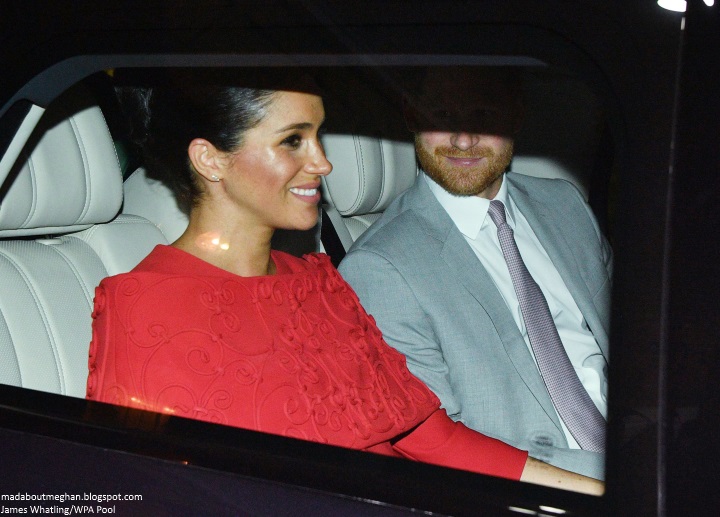 Unusually, Kensington Palace didn't share a public press release regarding the itinerary. Thankfully, the reporters were on hand to share relevant information. Several of you were in touch to ask if we would see the Moroccan monarchy involved in the trip. The media were informed earlier today that yes we will. 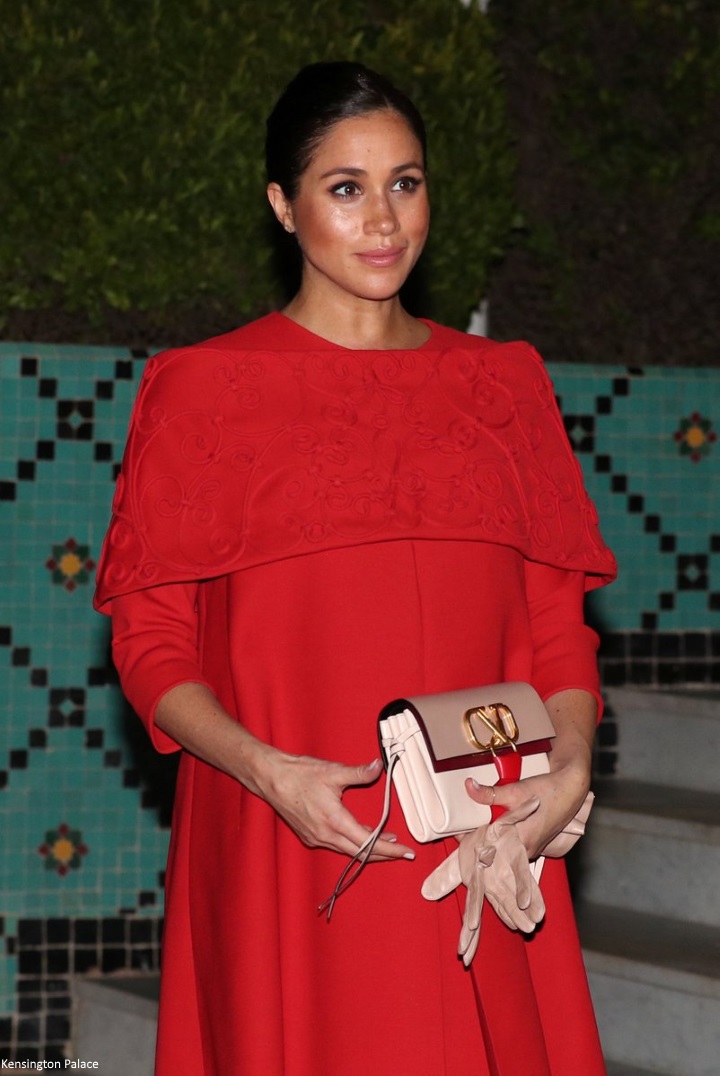 During their stay, Harry and Meghan will be staying at the royal residence in Rabat where they were greeted by fifteen-year-old Crown Prince Moulay Hassan. Despite the fact the heir is only a teenager, he's been training and preparing for his future for some time. He's greeted a number of officials, been involved in important visits and represented the family at funerals abroad. 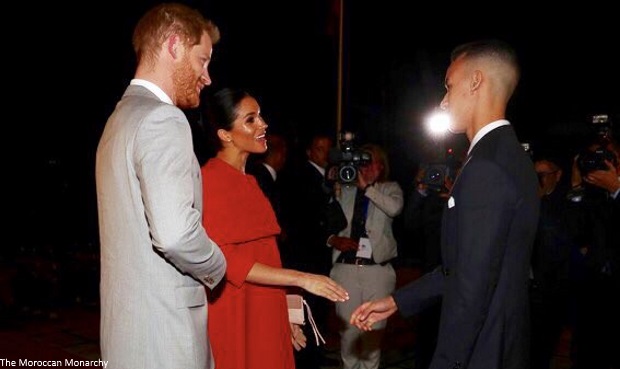 The couple were offered milk and dates - a traditional Moroccan welcome. 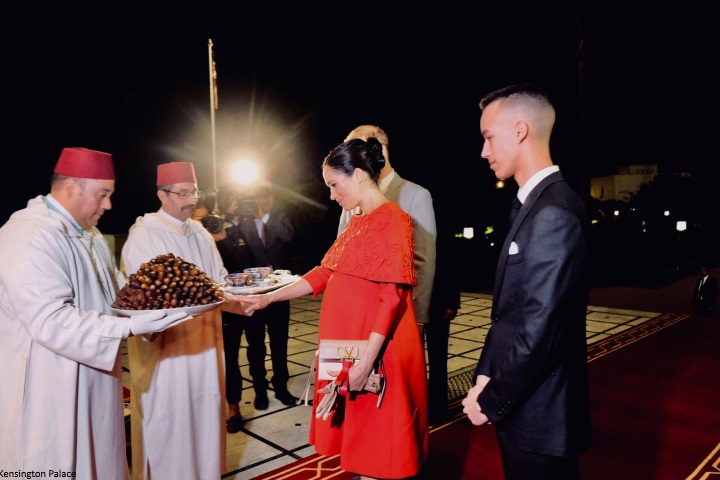 On Monday afternoon, the Duke and Duchess will have an audience with King Mohammad VI of Morocco. The spotlight on Morocco, with a recent State visit by Spain's King Felipe and Queen Leitizia, and Harry and Meghan's visit, has led to international media requesting information on the King's wife Princess Lalla Salma. There have been numerous reports claiming the couple divorced last year, however requests for official confirmation have been met with silence. The Princess has not been seen officially since late 2017. International media believe the King has custody of their children but she sees them often. Emily Andrews tweeted it's understood she's on the Greek Island of Kea with her daughter Princess Lalla Khadija. Below, the King and Princess with Crown Prince Moulay Hassan in 2014. 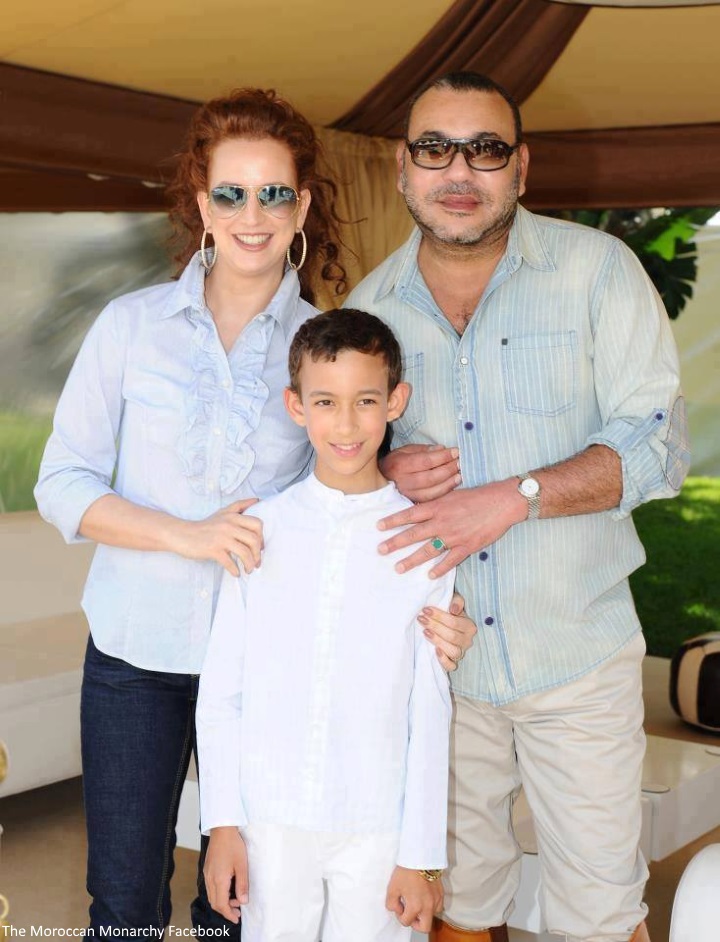 The Duchess looked regal in a bespoke red Valentino dress with an embroidered capelet. The cut and silhouette of the piece makes it an ideal choice for maternity wear. It's one of Meghan's best maternity looks to date. The shade of red looked lovely on her and provided a very nice sartorial nod to her host country. Not only is red the primary colour of the Moroccan flag, it represents hardiness, bravery, strength and valour. 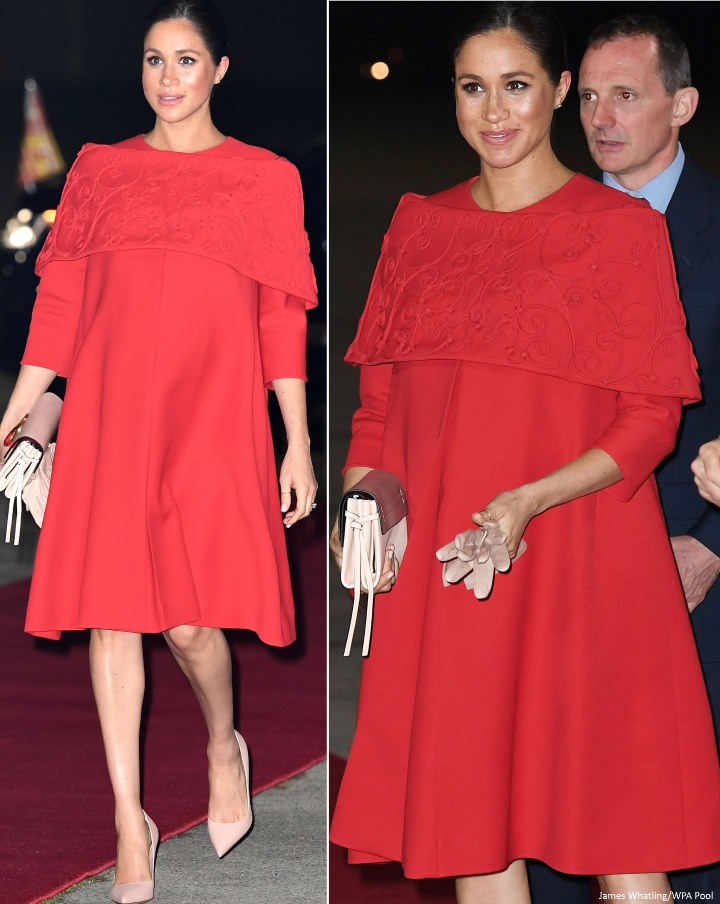 The UFO No More team noted Meghan's dress is based on pieces from the 2013 Spring Collection. 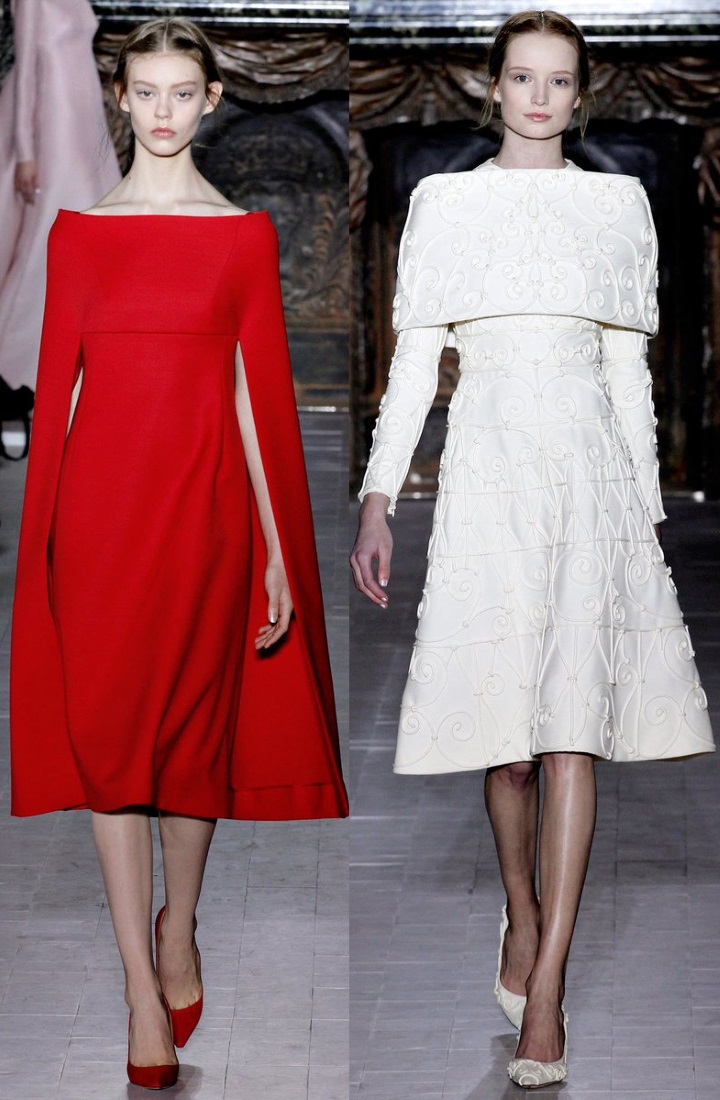 A closer look at the cape detail. 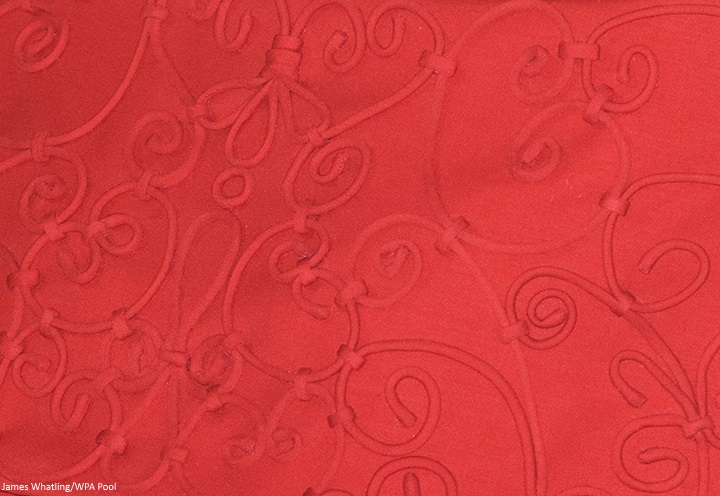 Meghan carried Valentino's Small Vring Smooth Crossbody Bag (with thanks to Meghan's Mirror). The bag features a metal logo, adorned with a ring and tie. The bag retails for $2,145 on the Valentino Website. It's available in medium at Bergdorf Goodman. 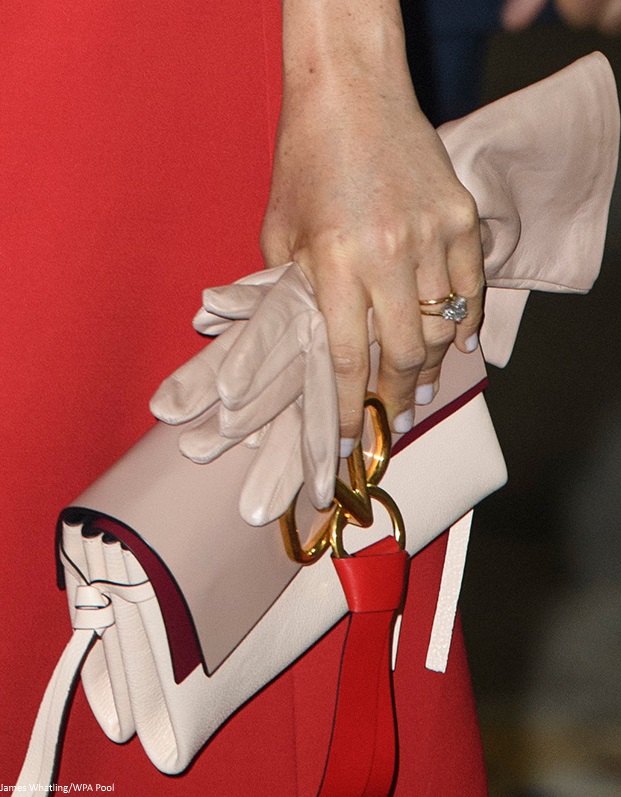 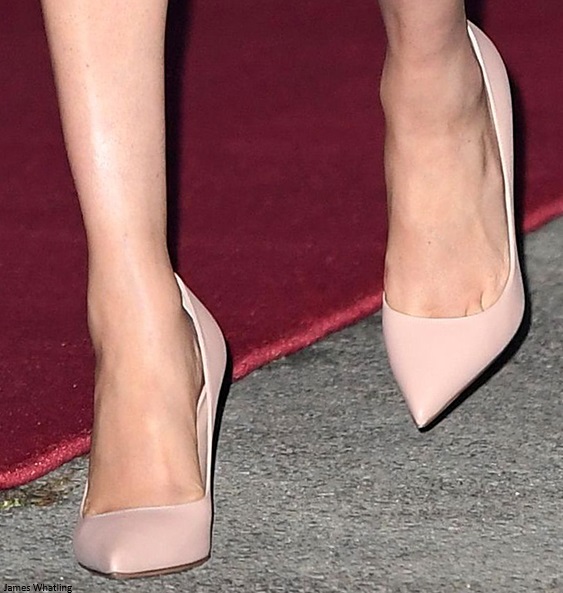 And accessorised with her Natalie Marie Diamond Sun Studs.

Tomorrow's Sunday Telegraph leads with a nod to Casablanca; Here's looking at you, Duchess. 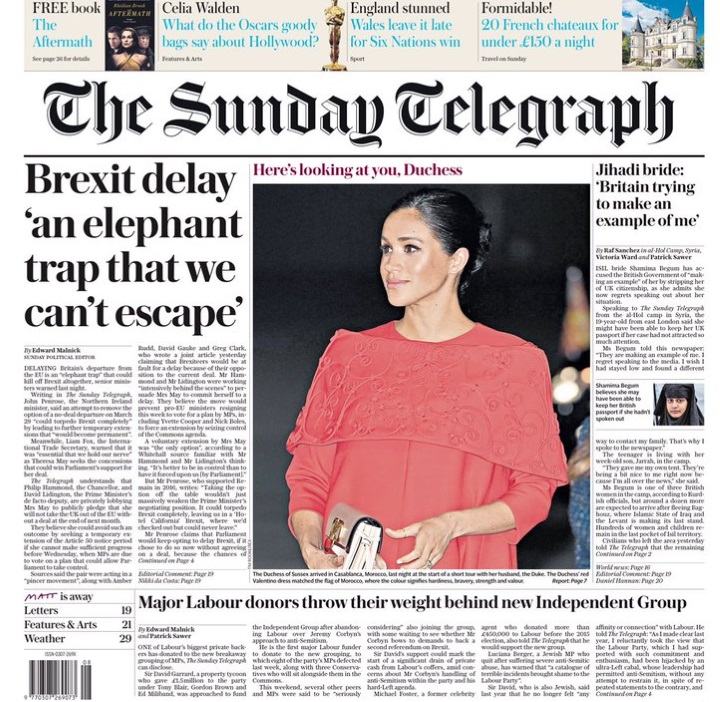 A look at the itinerary for tomorrow: