LIVE Blog: It's A Boy! "This Little Thing Is Absolutely To Die For"

00:30: And that's it for tonight. It's been a fantastic day. Again, congratulations to Harry and Meghan. I'm sure the new parents are enjoying every moment and hopefully getting some sleep. I know we're all incredibly excited to meet Baby Sussex on Wednesday and of course find out his name. Thank you so much for following and tuning in, it's certainly been a tremendously special day and one of my favourite blogging at MAM. These two have come a long way :) 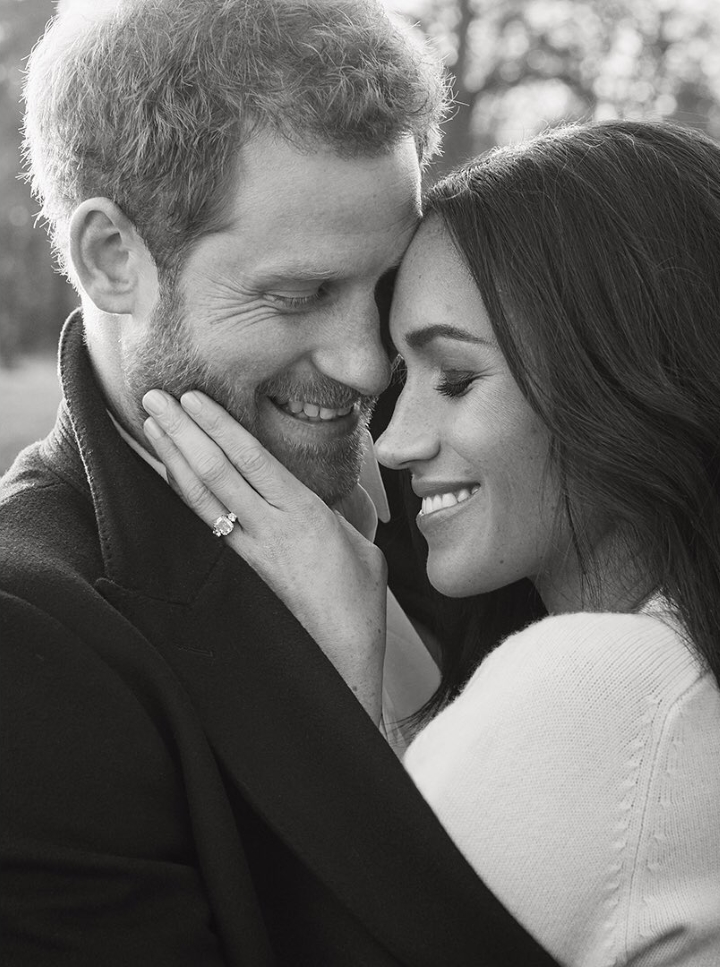 00:10: I'm wrapping up for the night with a couple of updates. Several royal correspondents now report Baby Sussex was born at London's Portland Hospital. The private maternity hospital combines a multidisciplinary team of staff, specialising in maternity, pediatrics, gynecology and obstetrics. Princess Beatrice and Princess Eugenie were born there. Rebecca English has the full story here. 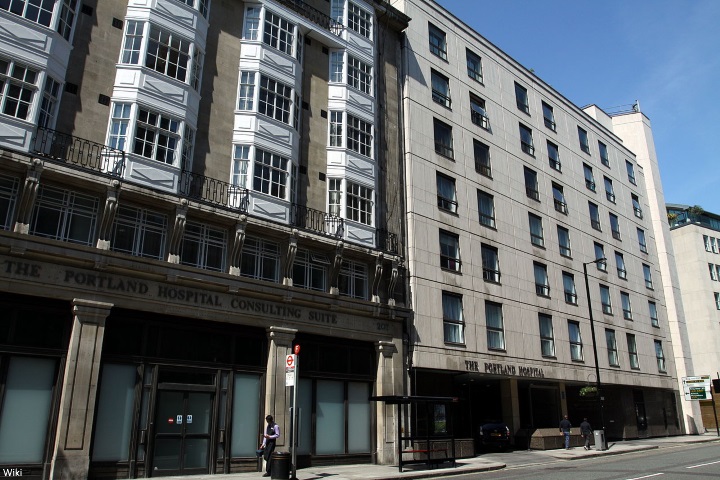 The London Eye lit up in honour of the new arrival. 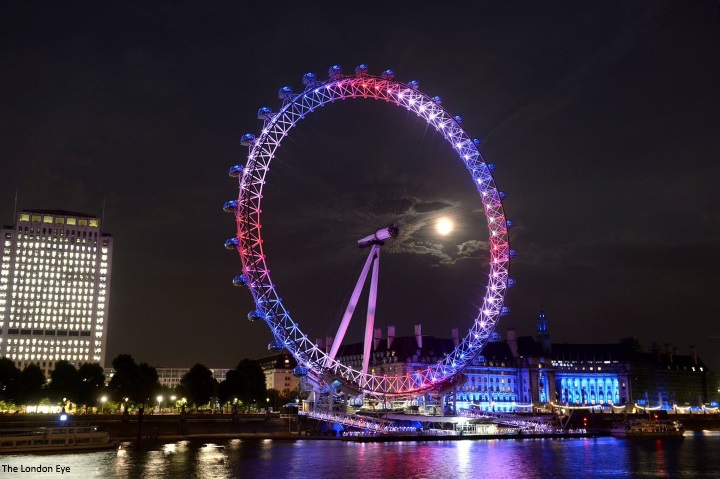 The news is most certainly dominating the front pages. 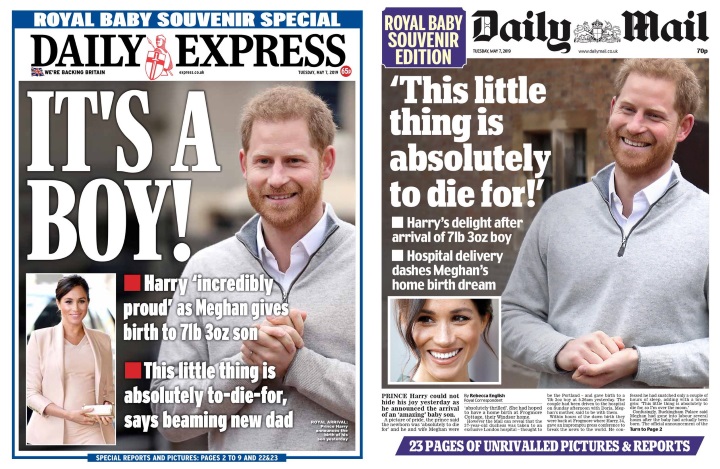 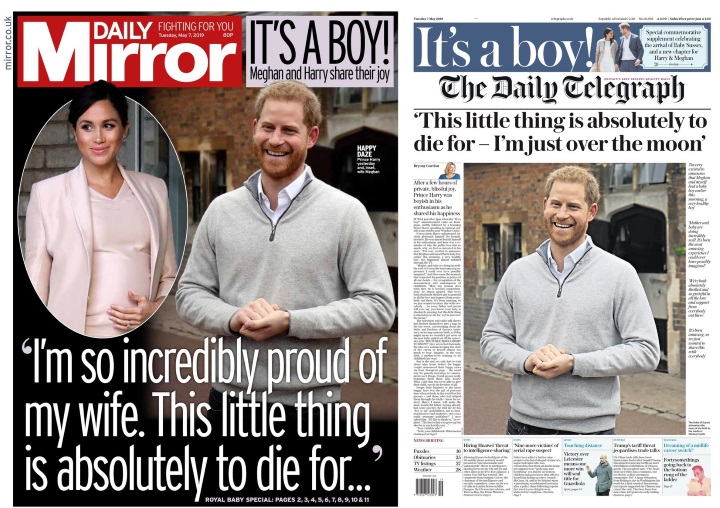 'Although the Queen’s surgeon gynaecologists Alan Farthing and Guy Thorpe-Beeston were understood to have been on standby, it is thought Meghan opted for a female-led team. A spokesman later told me another reason for the secrecy was because “the medical team sought privacy too” - which would suggest neither Farthing nor Thorpe-Beeston assisted with the delivery.

Far from breaking with tradition, in fact Meghan revived a longstanding royal practice in following in the footsteps of the Queen, who had all her four children at home - including Prince Edward, who was born at Buckingham Palace in 1964 when HM was 37 - the same age as the duchess.

But in the absence of a Lindo Wing steps moment - it was Harry, 34, who decided he wanted to deliver the news personally to the press and public.'


19:55 - Chris Ship confirms Harry will travel to The Hague on Thursday for the official launch of Invictus 2020. The Prince will only be away for the day, Meghan and Baby Sussex will remain at Forgmore Cottage with Doria.

19:30 - Reaction from Windsor and further afield.


18:55 - A spokesman for the couple told the Telegraph, Harry is "absolutely in awe of his wife. They are both delighted". I simply love this photo of Harry; it captures the myriad overwhelming feelings a new parent experiences. Several years ago he spoke of his desire to have a family and finding the right one. He's now a husband and father - a wonderful one at that I have no doubt. 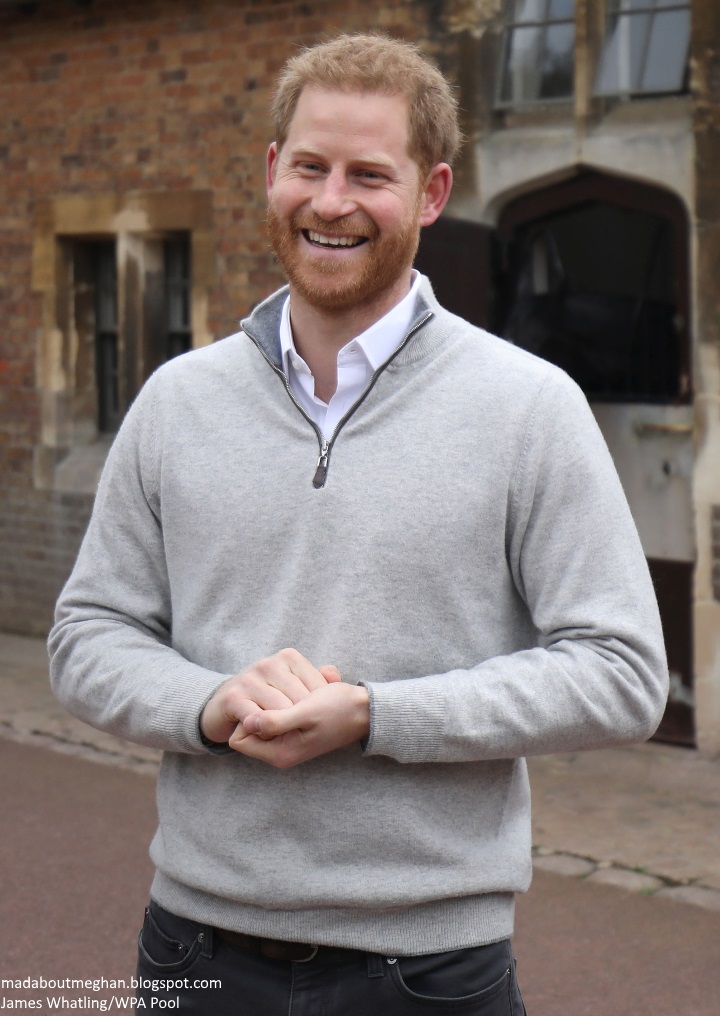 After his public announcement, he was congratulated by the press who shook Harry’s hand in turn and the duke seemed beside himself with glee – ready to tell everyone his good news again.

Away from the cameras his relaxed, easy going demeanour revealed the duke was still on a high after witnessing the miracle of childbirth, but confessed “I’ve had about two hours’ sleep”.

The duke even apologised about the short notice for the press conference and joked with a cameraman who said sorry for not wearing a tie, telling him “you’re a cameraman, you can get away with it”.


18:50 - From Harry and Meghan's Instagram account: "Their Royal Highnesses thank you for your support and kindness during this exceptionally joyful time in their lives as they welcome their baby boy." 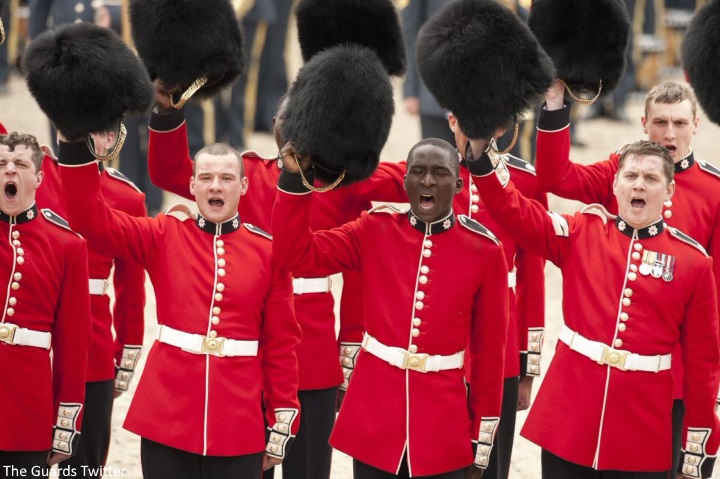 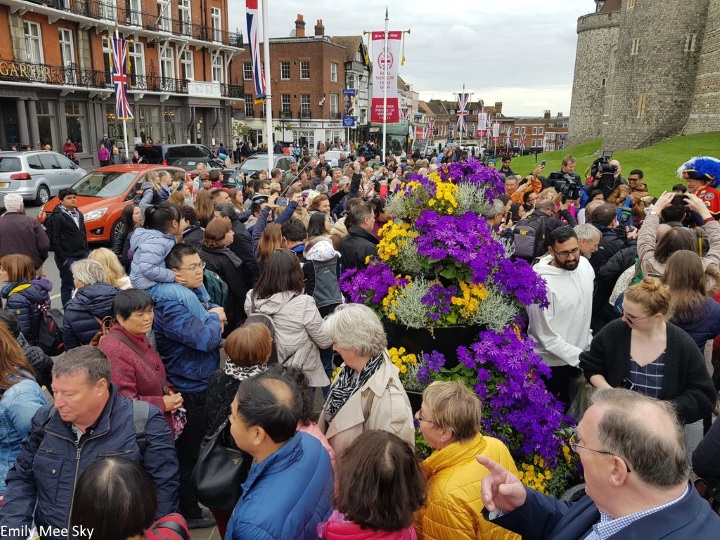 17:00 - The Town Crier announced the birth outside the castle gates.


The town crier announced the birth of the royal baby outside the castle gates to an excited crowd. pic.twitter.com/slQ45hMnfY
— Emily Mee (@EmilyMeeSky) May 6, 2019


16:50 - The framed birth notice has been displayed on a ceremonial easel in the grounds of Buckingham Palace. It reads: "The Queen and the Royal Family are delighted at the news that Her Royal Highness The Duchess of Sussex was safely delivered of a son at 0526 am today. Her Royal Highness and her child are both doing well". 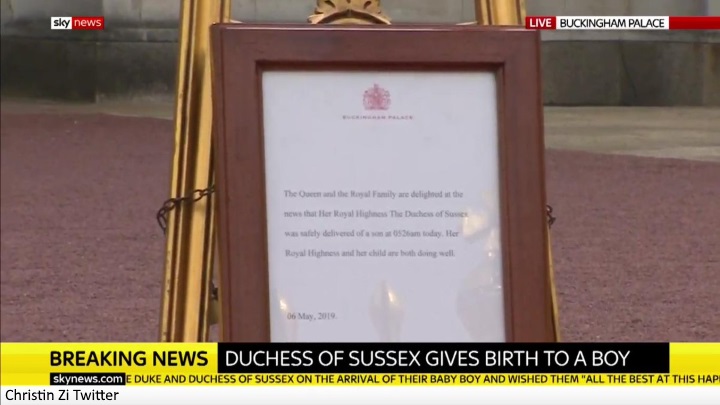 16:45 - It is thought the Duchess gave birth at Frogmore Cottage, given the wording of the press release it does seem to be a correct assumption. We know Meghan's mother Doria was by her side, she's been with her daughter for the past couple of weeks. The two share an incredibly close bond and Harry adores his mother-in-law. Buckingham Palace said: "The Duchess’s mother, Doria Ragland, who is overjoyed by the arrival of her first grandchild, is with Their Royal Highnesses at Frogmore Cottage." 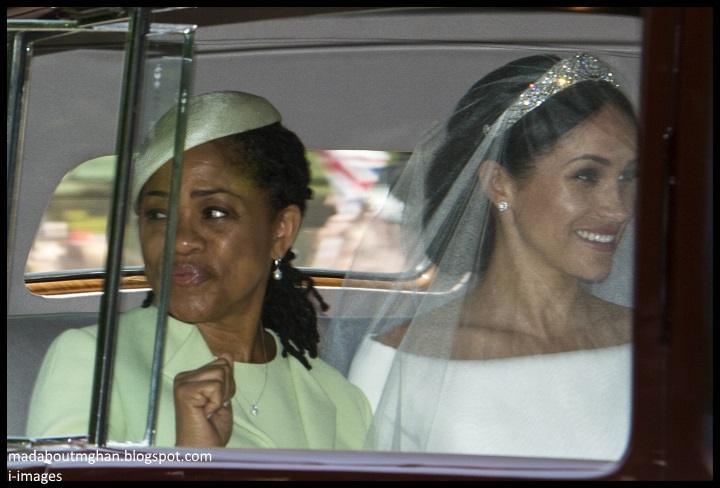 16:40 - Baby Sussex shares a birthday with George Clooney. The actor and his wife Amal are good friends of Harry and Meghan. Tony Blair, Bob Seger and Gabourey Sidibe were also born on 6 May.

It's going to be fascinating to see the chosen names. I expect we'll see a combination of traditional family names married with a touch of modernity. Chris Ship revealed the bookies favourites are Alexander and James. Of course, the Queen's middle name is Alexandra. Share your guesses in the comments. 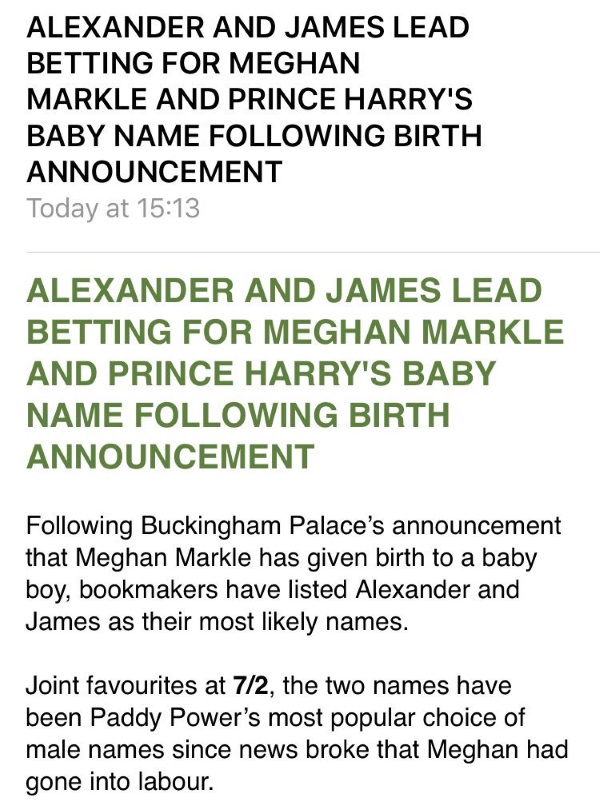 16:25 - We'll see the framed easel, as per tradition, on the forecourt of Buckingham Palace shortly.

15:45 - Watch Sky News live below. There's an abundance of coverage and interviews with royal reporters at present.

15:30 - Regarding the photocall, Harry said: "We will be seeing you guys in two days' time as planned, as a family, to share it with you guys so everyone can see the baby". We can expect to officially meet Baby Sussex on Wednesday, the photocall will take place in the grounds of Windsor. 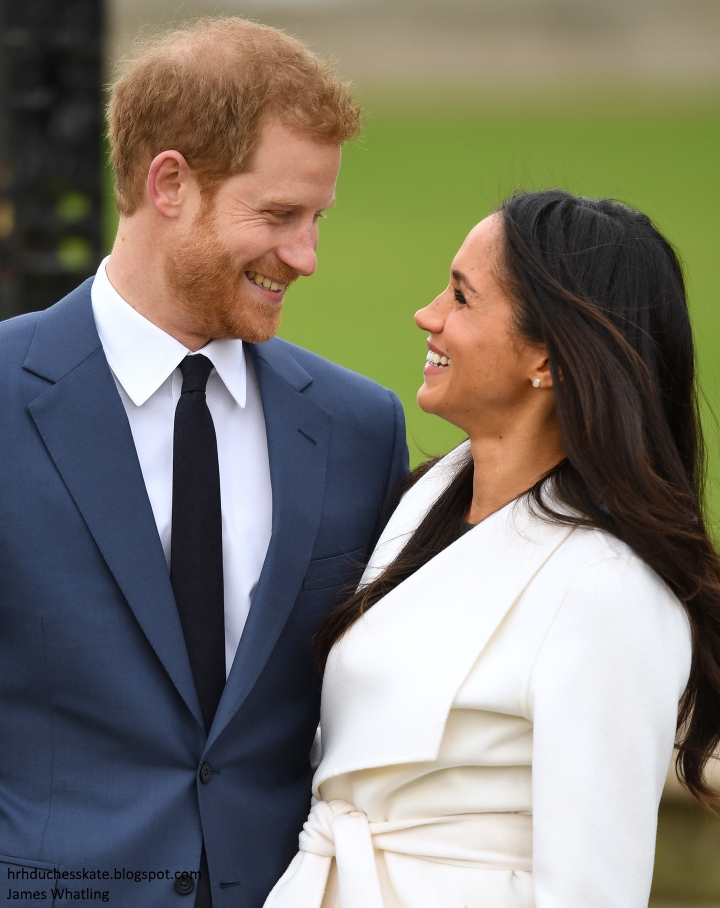 15:05 - It feels like a very appropriate time to congratulate Harry and Meghan on the birth of their son. These two are the proud parents of a healthy baby boy; royal news doesn't get any better than this :) 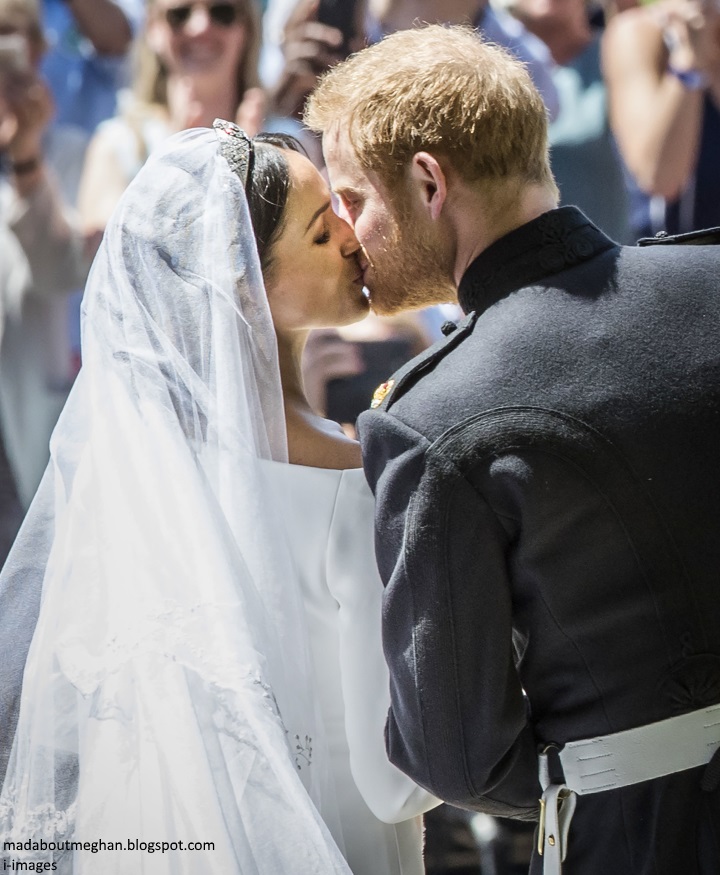 15:00 - I'm also embedding a Facebook video of Harry's very special announcement. "I'm very excited to announce that Meghan and myself had a baby boy this morning, a very healthy baby boy. I'm so incredibly proud of my wife. It's brilliant, I'm absolutely thrilled. We're really grateful for all the love and support shown to us. It's been overdue so we have had a little bit of time to think about names so that's the next bit. I haven't been at many births. This is my first birth. It was amazing and absolutely incredible. I'm incredibly proud of my wife. Every father and parent will say your baby is absolutely amazing but this little thing is absolutely to die for. I'm over the moon."


14:50 - The full statement from Buckingham Palace:

'Her Royal Highness The Duchess of Sussex was safely delivered of a son at 0526hrs this morning. The baby weighs 7lbs 3oz. The Duke of Sussex was present for the birth.

The Queen, The Duke of Edinburgh, The Prince of Wales, The Duchess of Cornwall, The Duke and Duchess of Cambridge, Lady Jane Fellowes, Lady Sarah McCorquodale and Earl Spencer have been informed and are delighted with the news.

The Duchess’s mother, Doria Ragland, who is overjoyed by the arrival of her first grandchild, is with Their Royal Highnesses at Frogmore Cottage.
Her Royal Highness and the baby are both doing well.'


14:45 - From Sussex Royal. "We are pleased to announce that Their Royal Highnesses The Duke and Duchess of Sussex welcomed their firstborn child in the early morning on May 6th, 2019. Their Royal Highnesses’ son weighs 7lbs. 3oz. The Duchess and baby are both healthy and well, and the couple thank members of the public for their shared excitement and support during this very special time in their lives. More details will be shared in the forthcoming days." 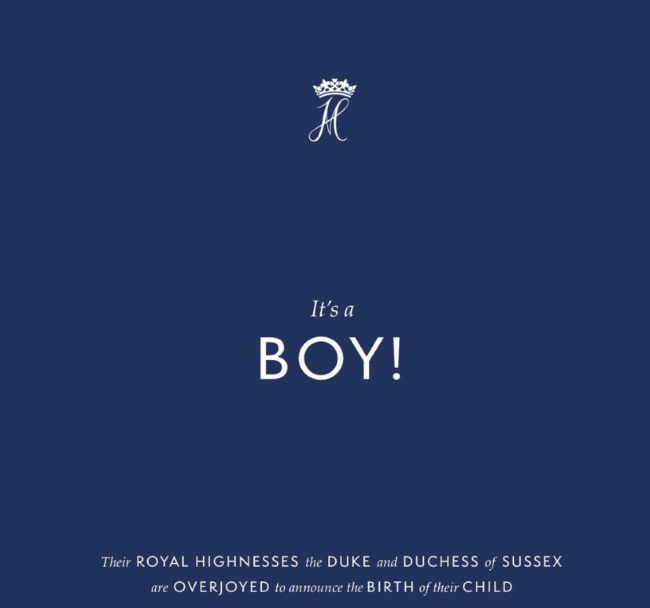 14:42 - In a heartfelt statement, delighted dad Harry said mother and baby are doing well. He said he's so "incredibly proud of his wife". Harry and Meghan's son was born early this morning. "We're both absolutely thrilled and so grateful for all the love and support from everyone out there".

'Members of the international press have been assembled in Windsor for several weeks awaiting news that the baby is on its way, with American television networks updating their viewers daily.

They will now be joined by excited members of the public and the British media, in the last few hours before the seventh-in-line to the throne is welcomed into the world.

The baby is understood to be around a week overdue, with the Duchess, who is 37, said to be “comfortable and content” as she waited in her new home at Frogmore Cottage with her husband and mother Doria Ragland by her side.'


14:15 - Several reporters and the Buckingham Palace press release suggest we'll hear an announcement very soon. It's possible Baby Sussex is already here? It's incredibly exciting news and I know we're all thrilled for the couple. What do you think? Boy or girl?

14:10 - It's the exciting news we've all been waiting for! The Duchess of Sussex is in labour. We'll be with you throughout the day with the latest updates and all you need to know. 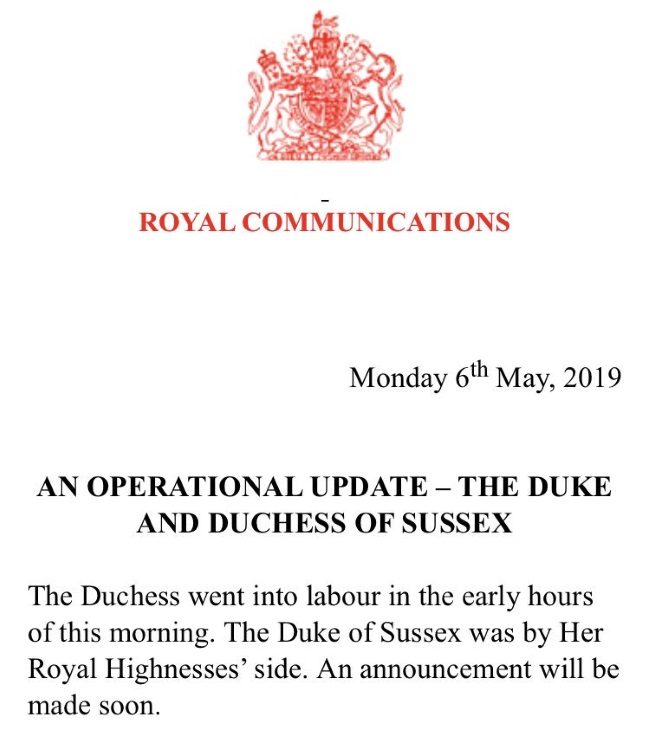