A Moving Night as the Sussexes Attend the WellChild Awards

It was an emotional night for the Duke and Duchess of Sussex at the WellChild Awards at the Royal Lancaster Hotel. 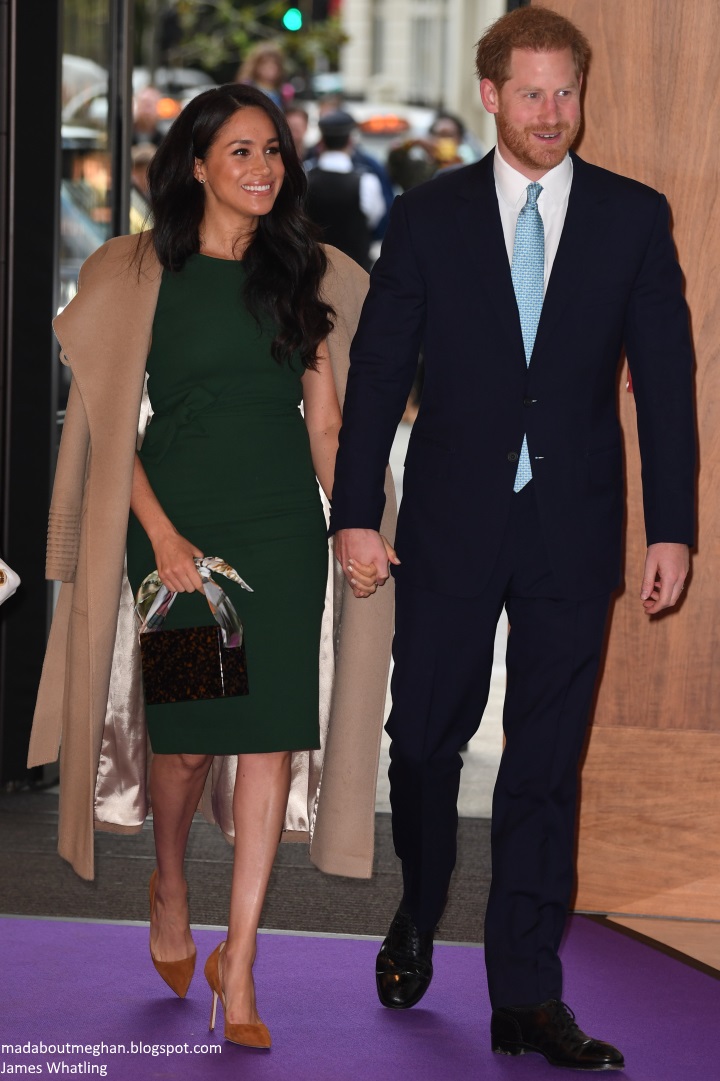 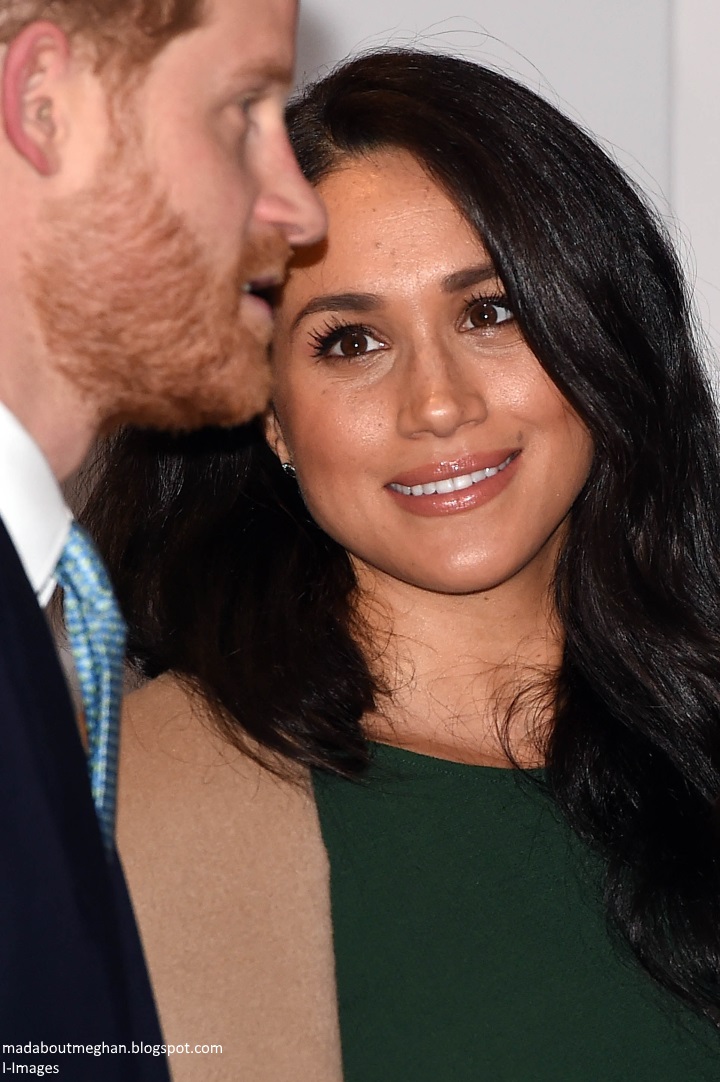 The WellChild Awards celebrate the inspiring qualities of some of the country’s seriously ill young people and the dedication of those who go the extra mile to keep children healthy and happy, including the outstanding health, social care and education professionals. The Awards play a huge part in highlighting what these families need, and the support that is desperately needed to meet the ever-increasing demand. 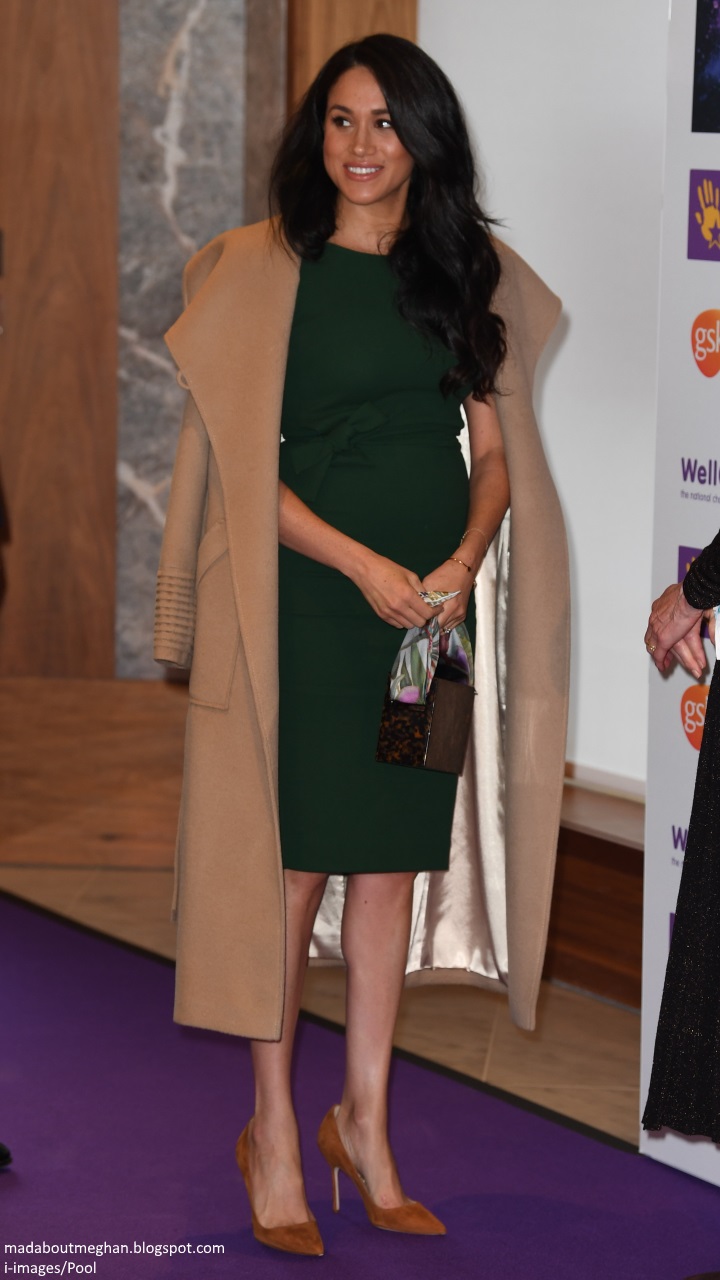 Harry and Meghan joined guests for a pre-ceremony reception where they met the young winners of each award category and their families, and the nominated healthcare professionals.

Talk quickly turned to Archie, with Meghan revealing she took her son to his very first playgroup in Windsor earlier today. Emily Nash reported: 'Harry and Meghan were chatting to Milly Sutherland, 11, and her mother Angela. Angela said: "She took him to one of these baby classes today and she said they had loads of fun together. She said it was really good fun." There was plenty of laughter as the couple joined the mum and daughter, and Milly pulled a strand of her red hair, telling the Duke: "Snap". Harry giggled and asked: "Can I borrow some?" When asked if Archie has red hair, Meghan and Harry said he definitely has "you can see it in his eyebrows". '

'Milly received WellChild’s Most Caring Child Award for having cared for and protected her sister Sophie, who had Aicardi Syndrome and tragically passed away in 2018.

“It’s quite emotional because we lost my daughter last year,” Angela said of meeting the couple. “Milly has spent most of her life massively missing out and it’s all about her now.”

Milly also told Harry she was appearing in a pantomime production of Aladdin and told him, “You could be the genie. I’ll paint you blue.” Harry replied, “So I’ll be blue with ginger hair – that’ll look nice!'

Harry and Meghan both wore wristbands designed by Jack and Freya, who have been supported by the charity. 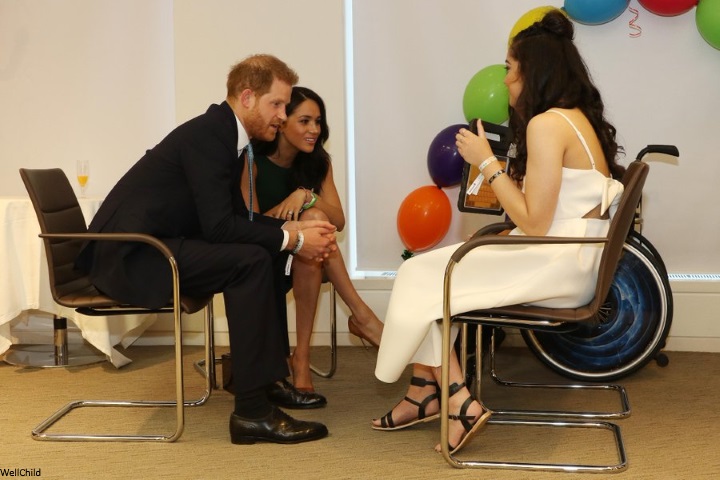 A closer look at the wristbands. 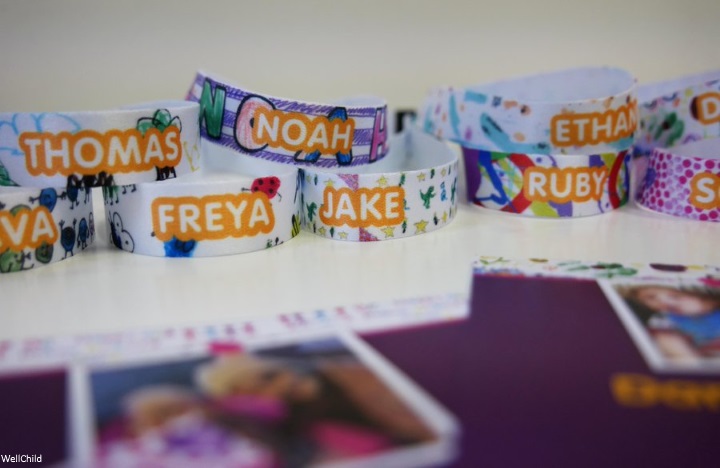 Harry and Meghan with Lyla Rose, winner of one of the Most Inspirational Child awards. WellChild shared the following on this amazing little girl. "Six year-old Lyla-Rose from Durham has undergone multiple surgeries for a life threatening brain tumour. Her ongoing condition leaves her with extreme fatigue at times and limits the activities she can partake in. Despite long stays in hospital which have interrupted normal life, she has shown much care and consideration for others. She always has a smile on her face and a kind word to say. As well as fundraising for local charities, Lyla-Rose, along with her sister Lilley, has created a Facebook page called Lyla and Lilley’s Stars which gives out certificates to celebrate other children coping bravely with illness and treatments. Lyla-Rose inspires everyone to look at the positives in their lives." 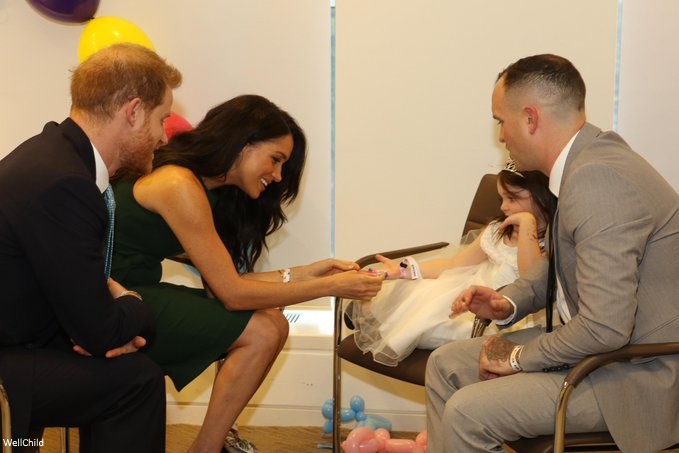 Another very worthy winner, Dexter. WellChild said: "Dexter is a shy six year-old from Devon who was diagnosed with Leukaemia in 2018. He has blossomed over the course of his treatment and hasn’t complained once. In the first week of diagnosis Dexter drew a picture of himself with his sister under a rainbow and gave himself no hair after hearing discussions about side effects. This was then made into a t-shirt design and was sold in its hundreds raising a significant amount of money for charity." 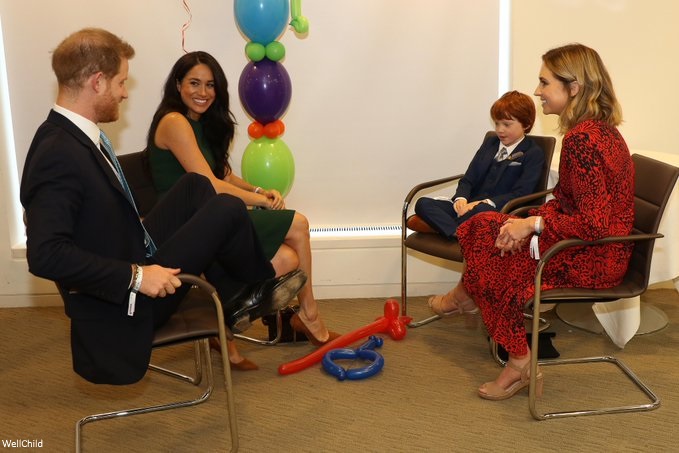 A high five for Oakley Orange. Reading the background on all the children awarded is honestly very humbling. Despite being faced with some of life's worst challenges, they prevail with positivity and a determination to help others. 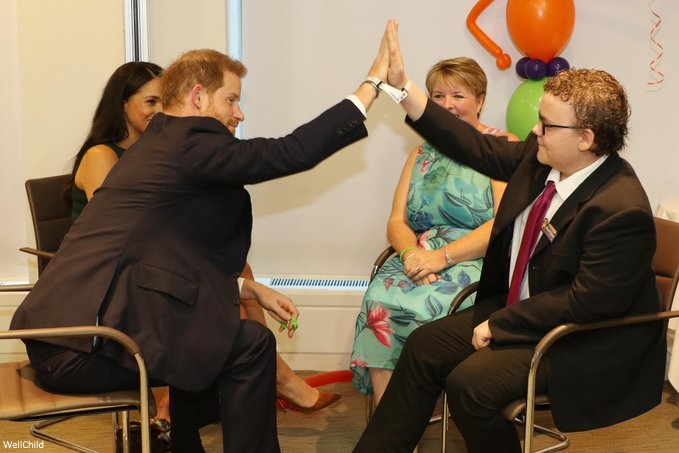 William Jones told the couple about caring for his younger brother James who has complex medical needs and an undiagnosed genetic disease. When James is in hospital Will visits every night. 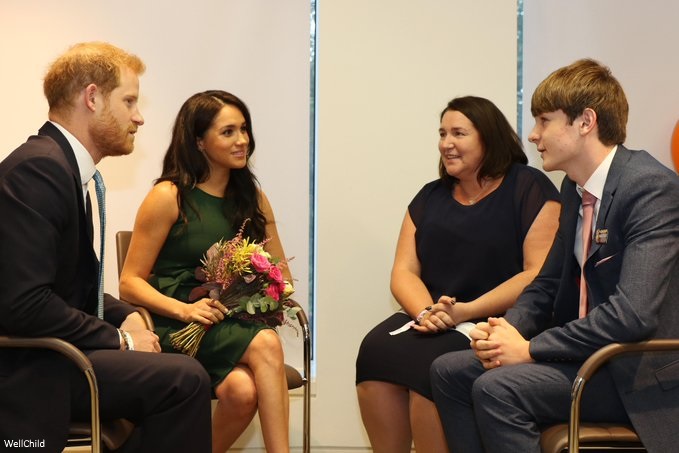 Harry and Meghan with representatives from the organisations. 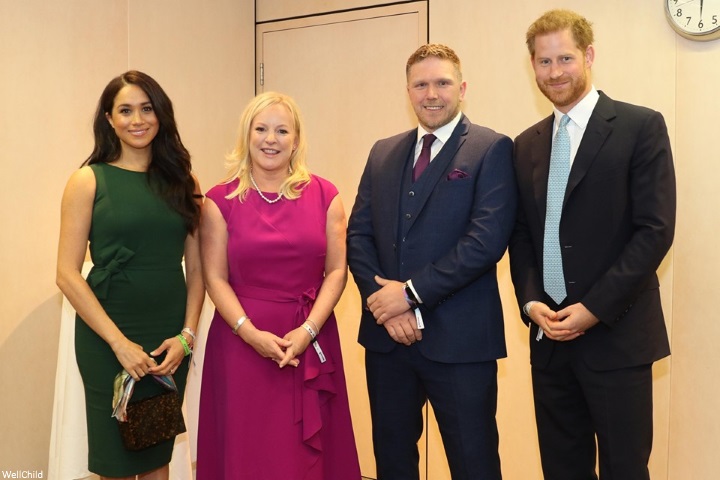 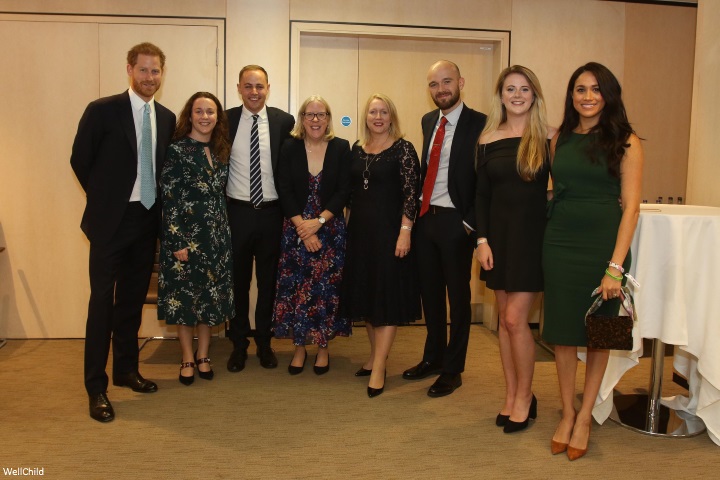 Meghan was excited to see what was inside... 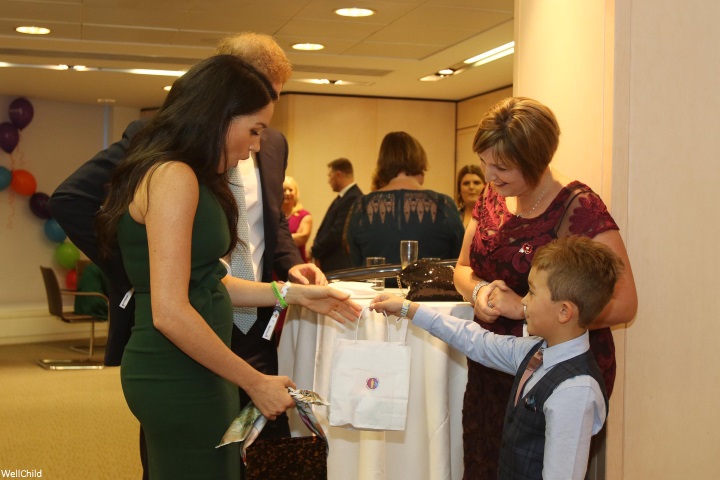 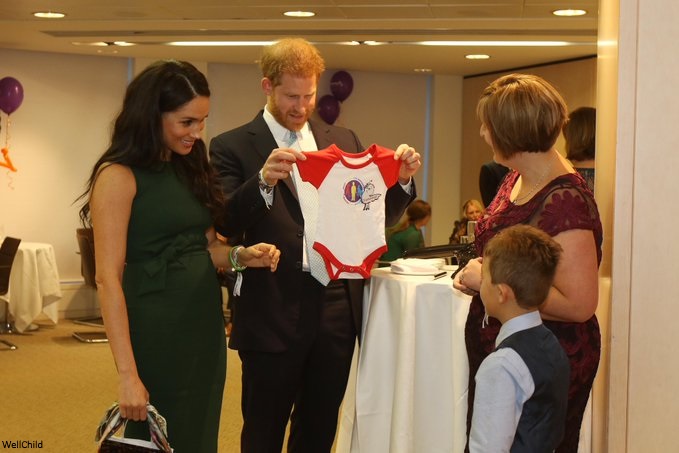 'Mother of award-winner Emmie, Eve spoke about her experience speaking with the royals, sharing that the Sussexes “were really nice and really down to earth.”

She added, “I come from a mixed race family, so for me, Meghan makes a difference to my world because she’s somebody who looks like me who’s married into the royal family...I guess for my child it’s somebody as a role model and inspiration for her that she’s a strong, mixed race woman who is part of the establishment. When I was growing up that didn’t exist.”


A hug for the Duchess from a member of the local school choir who performed. 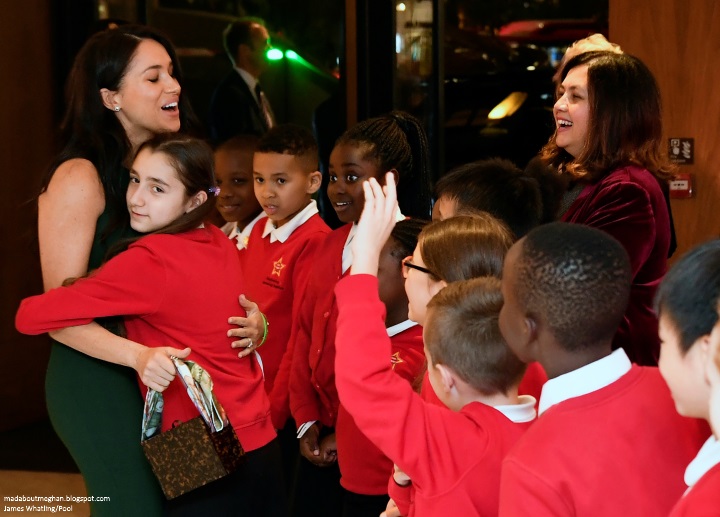 As Harry addressed the audience, he was visibly emotional as he discussed becoming a parent and attending the awards last year knowing Meghan was expecting: "Last year when my wife and I attended we knew we were expecting our first child - no one else did at the time, but we did - and I remember squeezing Meghan’s hand so tight during the awards - both of us thinking what it would be like to be parents one day and more so, what it would be like to do everything we could to protect and help our child should they be born with immediate challenges or become unwell over time. And now, as parents, being here and speaking to all of you pulls at my heart strings in a way I could have never understood until I had a child of my own." As I watched the video I teared up and I imagine there wasn't a dry eye in the house. Harry spoke from his heart; in his words we heard what becoming a parent has meant to him and how deeply he cares for WellChild. It's a testament to his devotion to both his family and the charity that he was so moved tonight.

The Duke and Duchess at the awards last year. 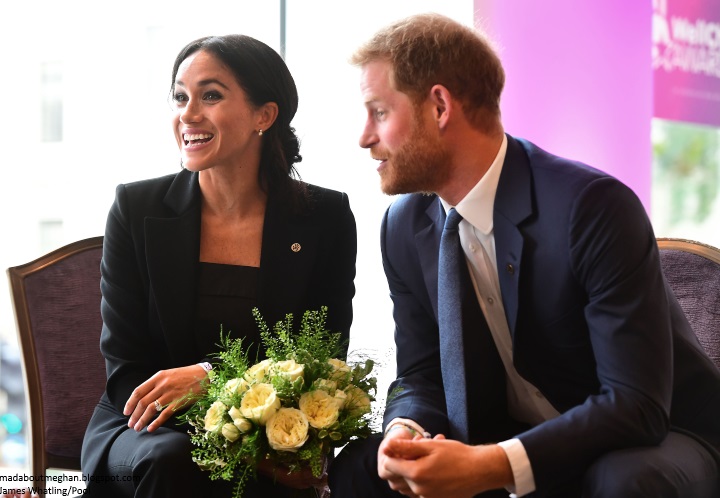 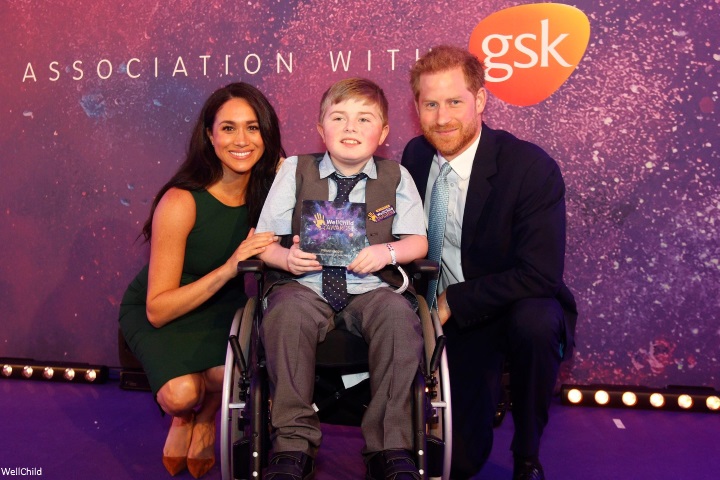 Earlier on, William gave the couple an 'Anyone Can Be A Hero' babygro for Archie. 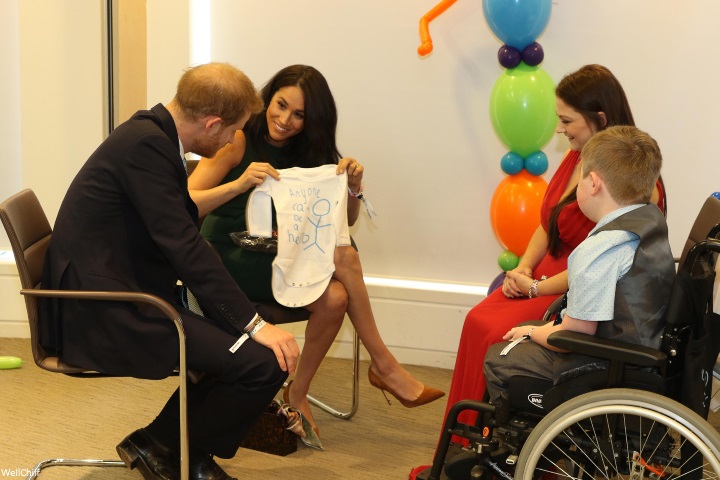 A group photo with the winners. 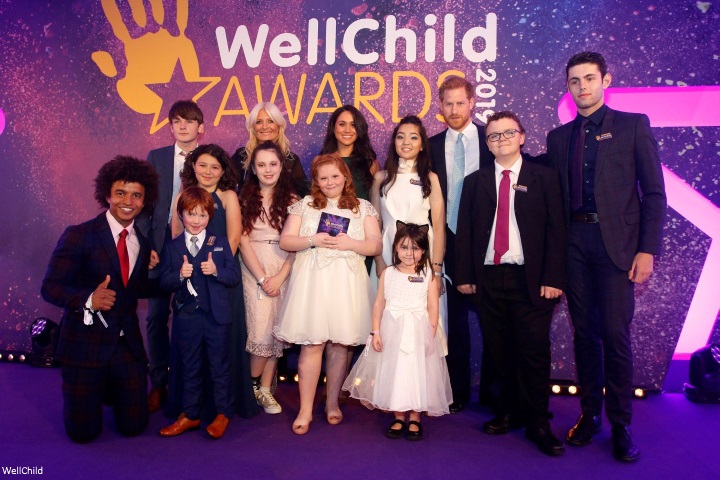 It was a beautiful night, packed with courageous and heartbreaking stories. As each year goes by, it's wonderful to see more well-known faces attending and coming on board to support these outstanding young people.

The Duchess brought back several pieces for the evening. Most notably, it was a lovely surprise to see her P.A.R.O.S.H. engagement dress again. We didn't see the piece in its entirety as Meghan wore a coat for the photocall. It's a beautiful piece and a classic staple style for engagements. 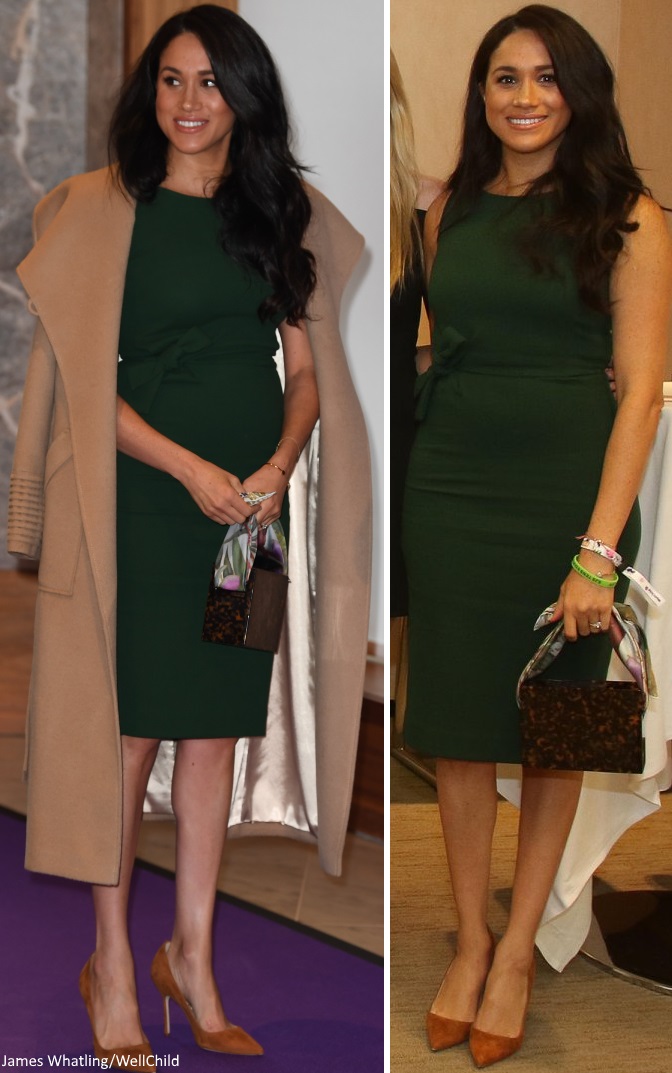 The fitted wool dress features a round neck, a sleeveless design, a fitted silhouette, a bow detail and a straight hem. 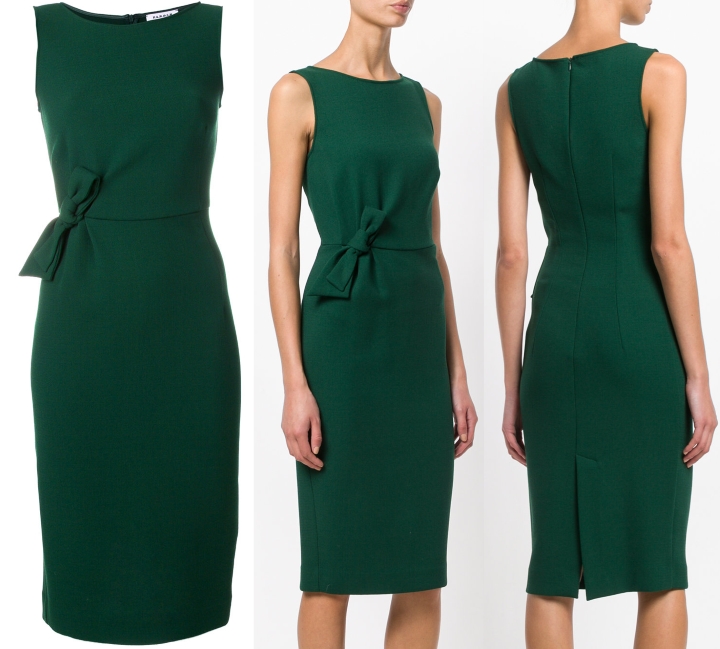 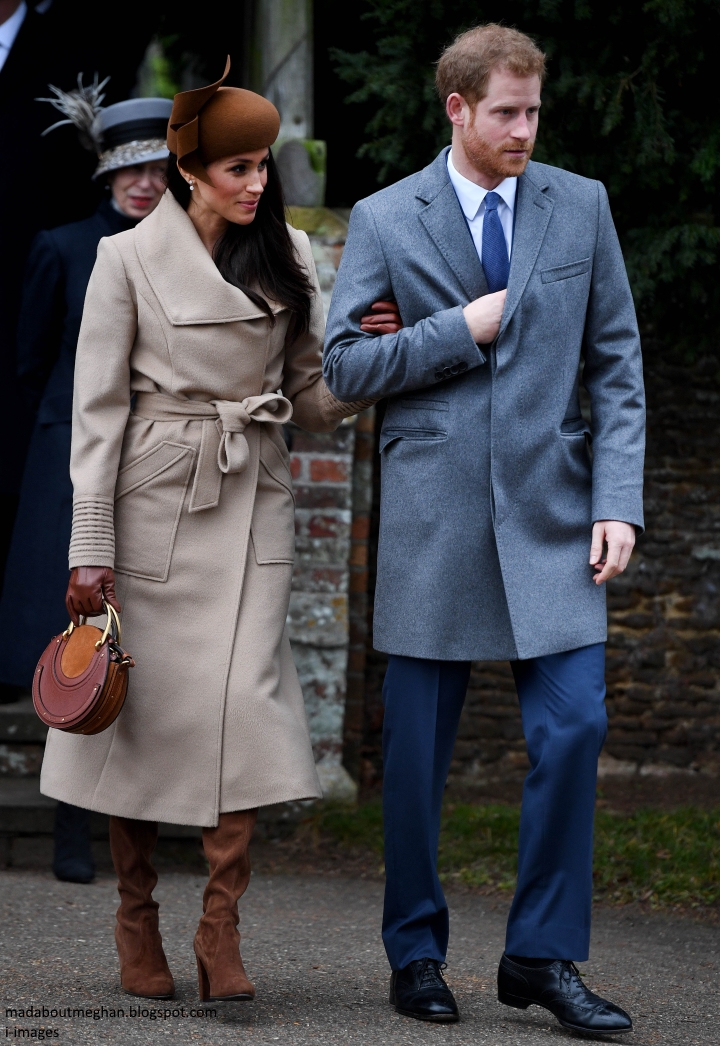 The piece is described: "This long wrap coat has the SENTALER signature wide collar that works in harmony with the longer length. The fit and flare vented hem keeps the femme feel of a sophisticated classic that will be worn season after season." 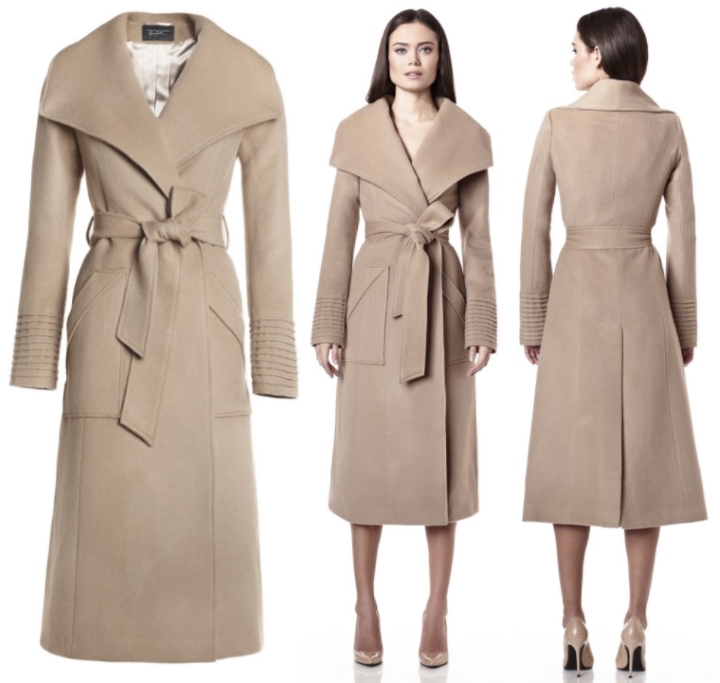 Meghan's gorgeous new bag is the Montunas Tortoiseshell Scarf bag (with thanks to UFO No More). 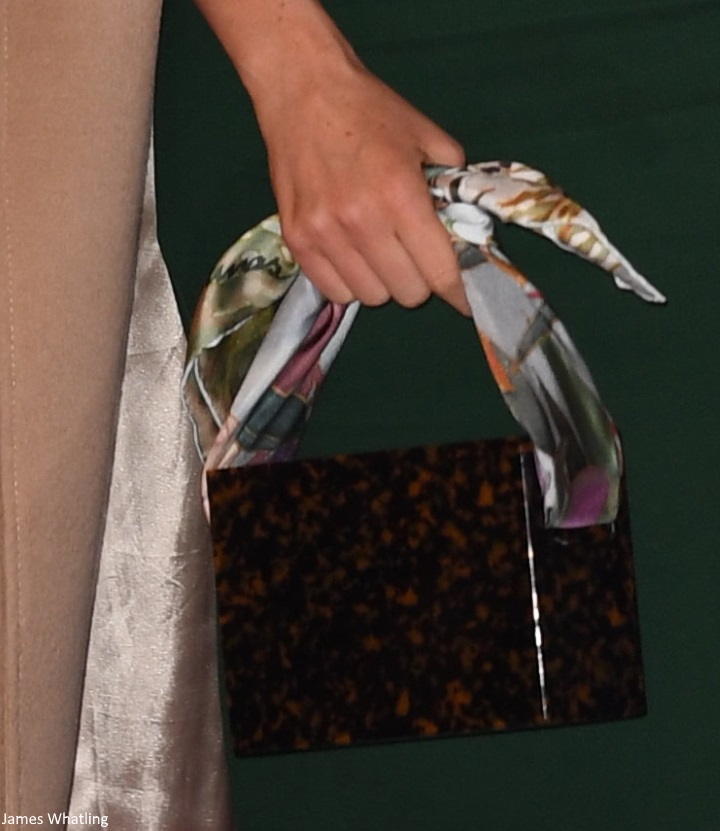 And her Manolo Blahnik BB pumps in cognac. 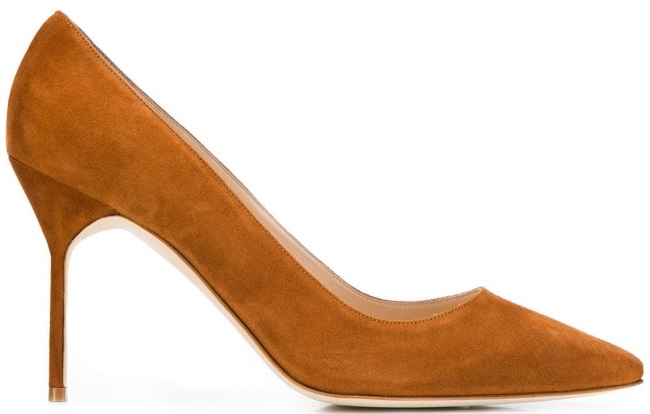