Meghan in Oscar de la Renta for the Wedding of Diana's Niece!

Exactly one month after their own wedding, the Duke and Duchess of Sussex attended the nuptials of Harry's cousin Celia McCorquodale and George Woodhouse at St Andrew and St Mary's Church in Stoke Rochford, Lincolnshire yesterday. The couple were all smiles as they arrived holding hands and mingled with relatives. There's a selection of photos available on the Mail Online. 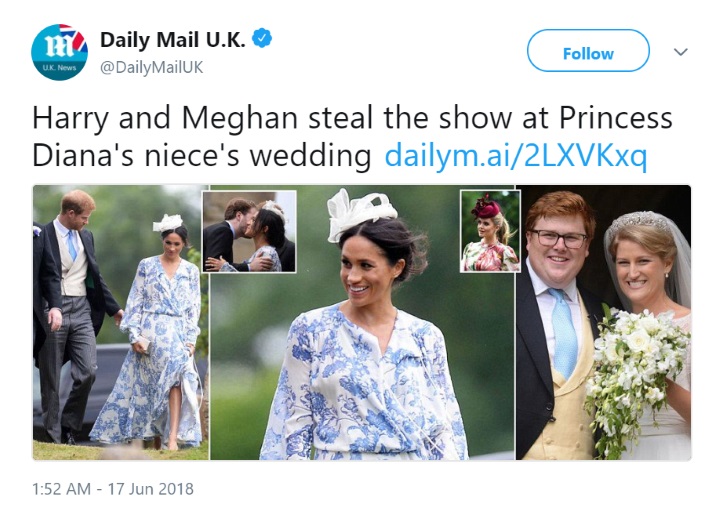 Celia McCorquodale is the younger daughter of the Princess of Wales’ sister Lady Sarah McCorquodale. The Express reports: "The bride attended Meghan and Harry’s glittering wedding at St George’s Chapel in Windsor exactly four weeks ago and returned the favour by inviting her cousin and his new wife to her own celebrations." 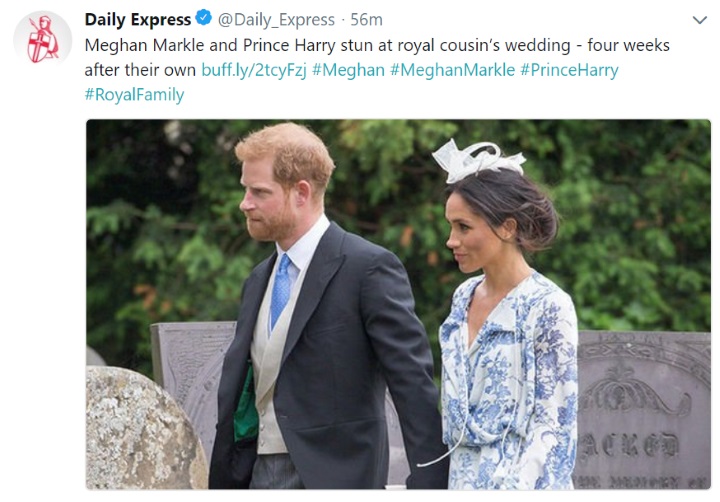 'Bride Celia, daughter of Lady Sarah McCorquodale, Diana's eldest sister, looked radiant in a white princess-style dress with lace detailing. She wore the Spencer tiara, which was worn by Princess Diana when she married Prince Charles in 1981.

The Spencer clan turned out in force for the traditional church service, with D&G model Lady Kitty Spencer and Diana's siblings Earl Spencer and Lady Jane Fellowes among the congregation.

The pair were warmly greeted by the Spencer family, with Prince Harry's cousin, Louis Spencer, 24, who was recently dubbed Britain's most eligible bachelor, giving him a bear hug and kissing Meghan on the cheek.'


St Andrew and St Mary’s Church is a Grade I listed Church of England parish church dedicated to Saint Andrew and Saint Mary, in the parish of Easton and the village of Stoke Rochford, Lincolnshire, England. The church is significant for its association with, and memorials to, the Easton Hall Cholmeley and the Stoke Rochford Hall Turnor families. 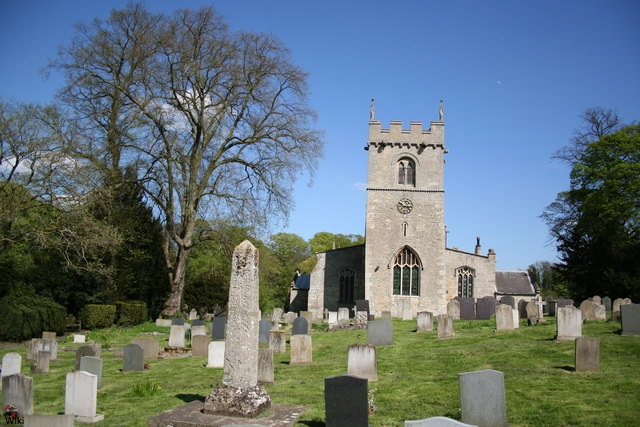 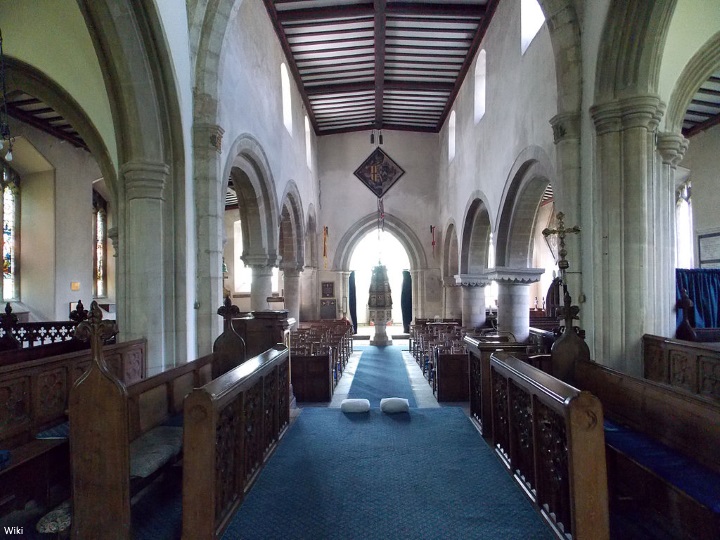 The east arcade between the chancel and south chapel. 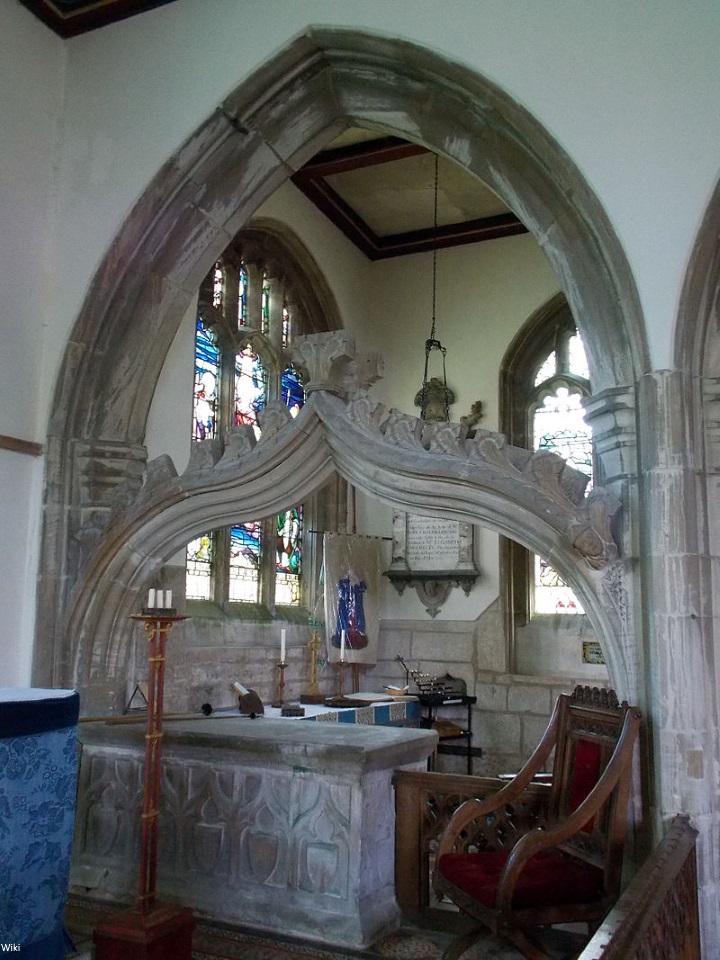 As noted above, the radiant bride wore the Spencer tiara - a family heirloom that was worn by Diana and her sisters on their wedding days. 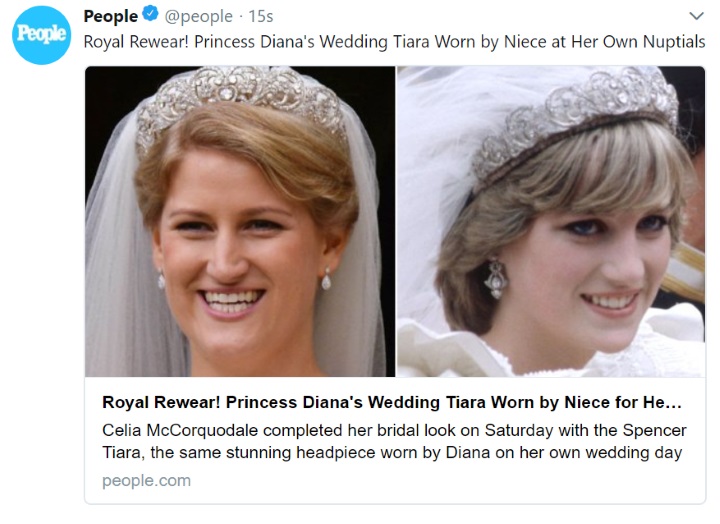 Made by Garrard, it features an elaborate design of stylized flowers and scrolling foliage. 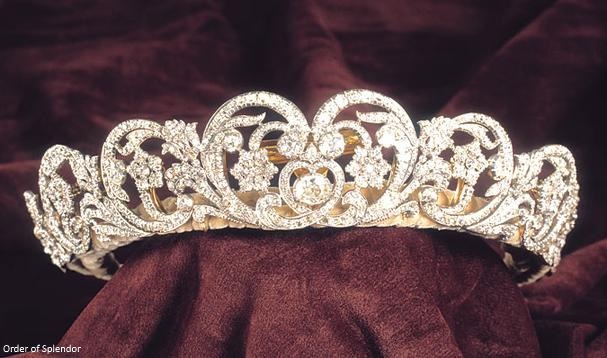 'Though this piece was once said to date from the 18th century, it actually seems to be a combination of pieces of varying ages and from different jewellers that has gone through several changes over time. The center element was a wedding gift from Lady Sarah Spencer to Cynthia, Viscountess Althorp (Diana’s grandmother), in 1919. This piece was remounted by the Goldsmiths and Silversmiths Company at some point, and Garrard was asked to create four matching pieces in 1937 to add on. The oldest bits are at the ends; these are said to have come from a tiara once belonging to Frances, Viscountess Montagu and left to Lady Sarah Spencer in 1875. The full current appearance apparently dates from around 1935.'


Although the Queen had loaned Diana the Cambridge Lover's Knot tiara, she found it headache inducing and heavy to wear. She continued to borrow the Spencer tiara from her father and later her brother. It was nice to see it again at the wedding - it's the first time it's been publicly worn since Diana died. 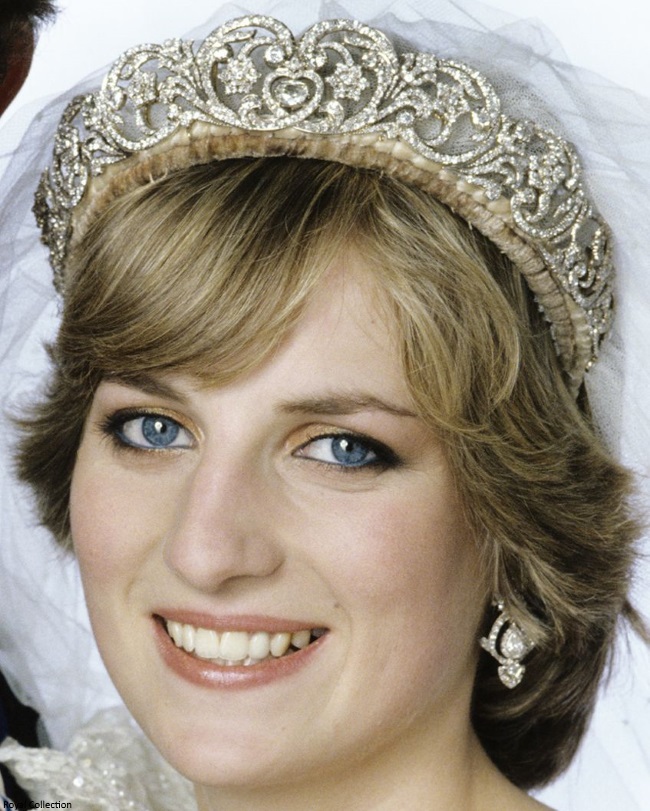 A video of the bride arriving.


The Duchess selected the Oscar de la Renta Long Sleeve Cocktail Dress for the wedding (with thanks to Innominate93). 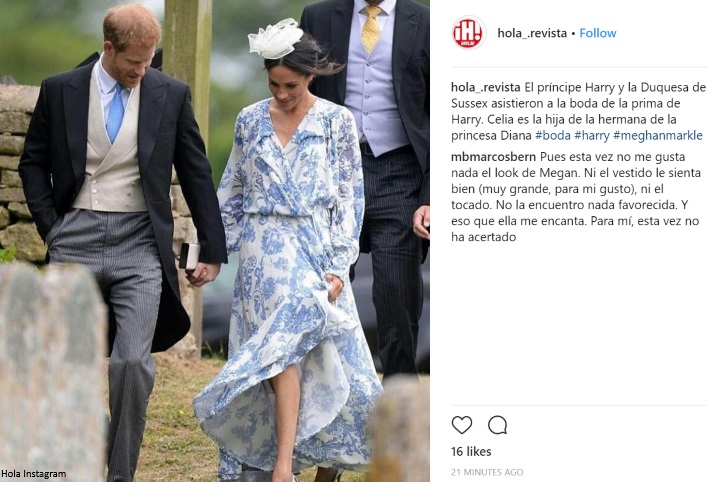 Made in Italy, the dress features a wrap silhouette, a ruffled high/low hemline, and a cinched waistline. It's currently available at Moda Operandi. The blue and white toile print piece has proved a divisive choice thus far. I think the issue is, it appears to be at least a size too big and swamps Meghan's figure. If the waistline were cinched in, it would create a completely different look with the flowing skirt. It is a beautiful print though and I'm very excited to see Meghan in Oscar de la Renta! The dress is from the Resort 2019 Collection. 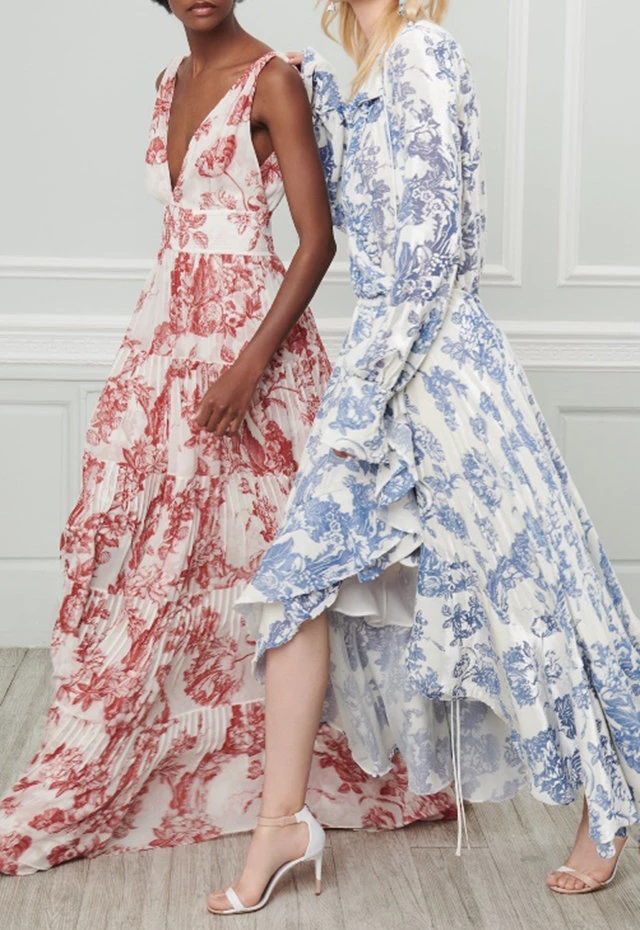 'Meghan is a woman who knows her fashion audiences. Wearing spotless, figure-hugging white Givenchy couture on her first solo engagement with the Queen this week provided a wow-factor that the crowds of Runcorn will likely have never seen.
But today, she’s trying to embed herself in Harry’s crowd, maybe cement relations with her new British girl friends. This was a dress for them. If she’d pulled one of her razor-sharp, bodycon power dresses from her cupboard (the type that we might associate with her Suits character Rachel Zane) she wouldn’t have looked so approachable.

She’s also trying not to outdo another bride. Celia McCorquodale, a niece of the late Diana, Princess of Wales, was marrying George Woodhouse, less than a month after her cousin Harry married Meghan in one of the most high profile weddings ever. This was McCorquodale’s moment - indeed she looked incredible, and wore the Spencer tiara, the same as Diana did for her wedding to Prince Charles in 1981.

Meghan’s choice yesterday was easy on the eye, and not overpowering in any way. Judging by the numerous pictures of her air-kissing with the Spencers, its softness was also entirely successful.'


You might recall, Meghan's mother Doria Ragland wore Oscar de la Renta for the Royal wedding. It turns out Meghan contacted the brand directly. I expect we'll see the Duchess in more pieces from the fashion powerhouse throughout the year. 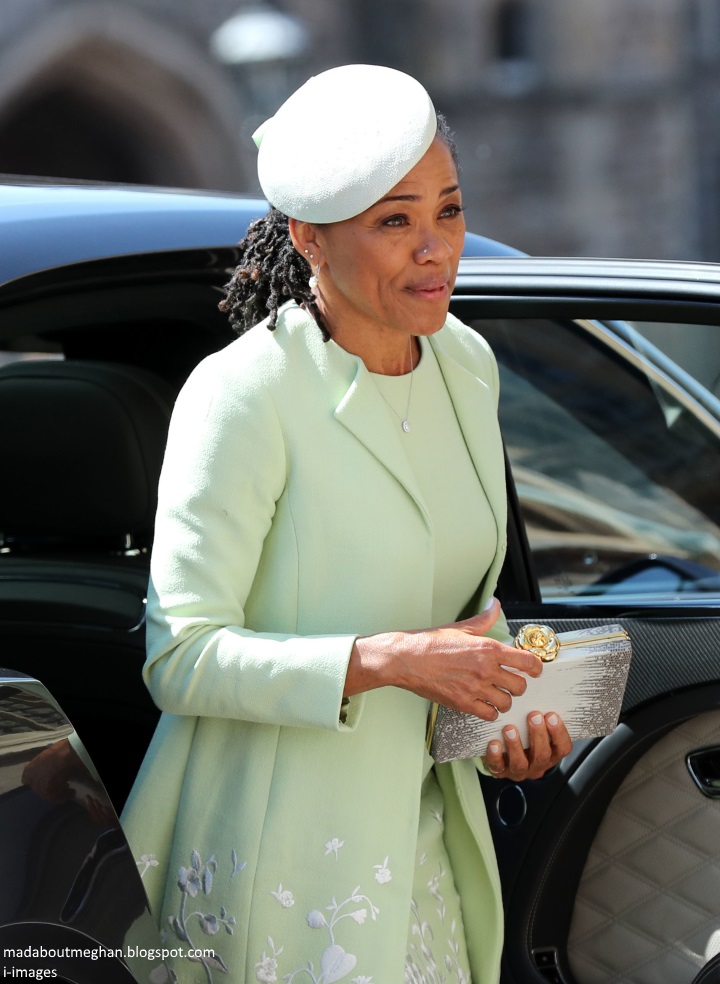 'Back in January, Laura Kim and Fernando Garcia received a call from Meghan Markle about a wedding day look for her mother Doria Ragland. “She knew she wanted a pistachio or melon look for her mom,” Garcia remembered. The house of Oscar de la Renta has surely dressed many mothers-of-the-bride over the decades, Hillary Clinton included, but royal weddings are another thing entirely. It was a huge coup for the duo, and if it hasn’t immediately resulted in a boost in sales, as Meghan’s own choices do, it has at least raised the designers’ profiles. “I got a lot of new followers,” Kim said.'

Speaking of the Royal wedding, it very much appears Meghan wore her gorgeous Aquazurra shoes from the reception. 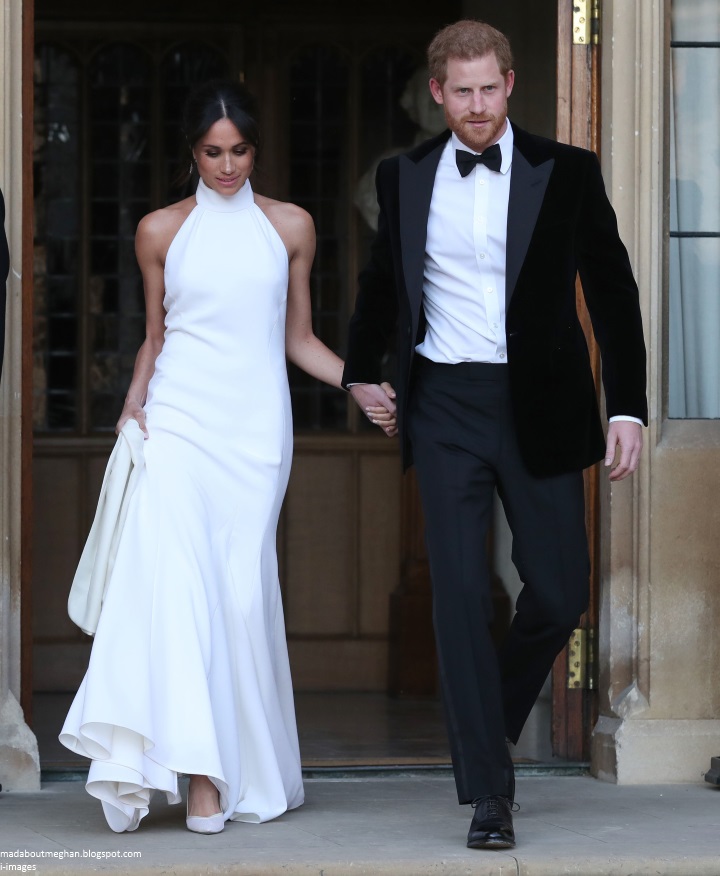 The shoes are made in silky satin, with nude mesh, with soles painted in baby blue. 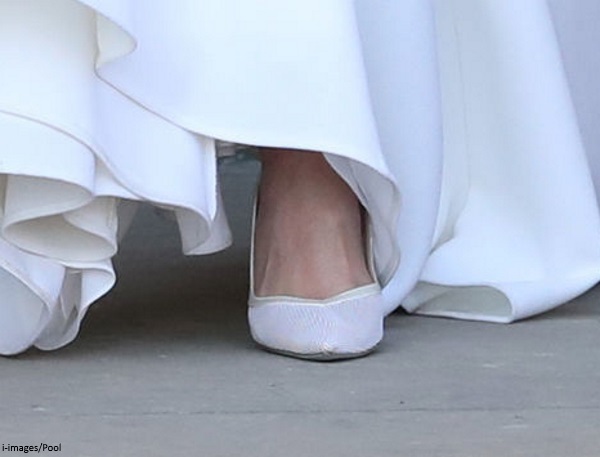 With many thanks to Perth Fashion and What Meghan Wore, it turns out Meghan's fascinator is the £29.50 Pillbox Bow Fascinator by Marks & Spencer. The straw piece is described as a "classic pillbox style fascinator is a timeless design that will never date. This gorgeous headpiece features a swirling bow design sure to lift any special occasion outfit. Whether pairing with a floral dress or accenting a sleek tailored suit, this fascinator will be the perfect finishing touch to your look." 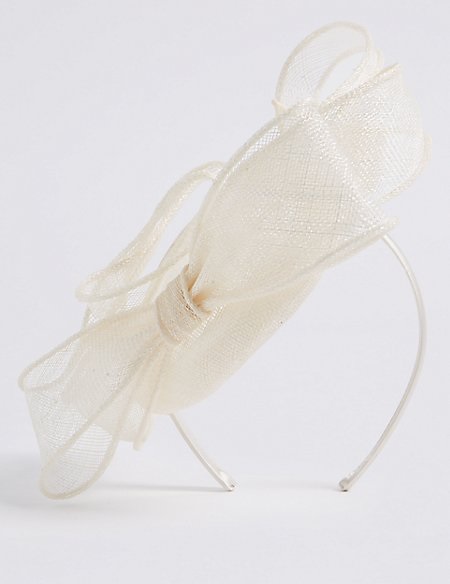 Meghan wore the £45 Marks & Spencer Autograph Wool Blend Round Neck Bell Sleeve Jumper during a visit to Birxton in January. She's obviously a fan of the affordable British retailer. 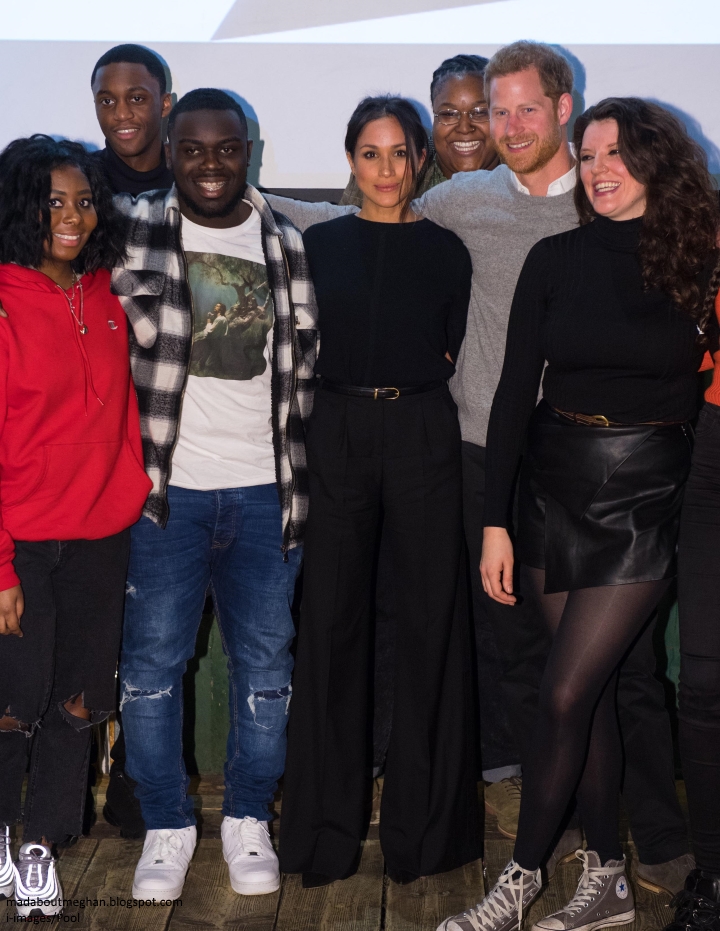 Meghan completed the look with a Carolina Herrera clutch (with thanks to Meghan's Mirror reader Jessica) She wore her hair in an elegant updo. It was a lovely surprise to see Harry and Meghan at the wedding, it's always nice to see the young royals spending time with their Spencer cousins. It was also a great opportunity for Meghan to meet extended members of Diana's family.

Royal Ascot starts on Tuesday, we do expect to see the Duke and Duchess at some point during the week :)
Posted by Admin at 6/17/2018