Welcome back, Harry and Meghan! The Duke and Duchess of Sussex made their first public appearance of 2020 with a visit to Canada House in Trafalgar Square, London, meeting with Janice Charette, High Commissioner in Canada to the UK as well as staff to "thank them for the warm Canadian hospitality and support they received during their recent stay in Canada". The couple arrived directly from a private visit to the Hubb Community Kitchen. Sales of Together enabled the Hubb team to refurbish their kitchen, open 7 days a week and a number of the women involved gained certificates from several training courses enabling them expand their skills and roles. More from a Susssex Royal post shared before Christmas. "Today, the women at the Hubb Community Kitchen continue to have a positive impact in their community, across the UK, and around the world. Whether it’s providing a safe space for women and children to come for a hot meal, supporting local schools, serving free lunches to senior citizens, partnering with the Red Cross to provide lunches for refugees, or feeding the homeless - the Hubb helps and heals through their support and sustenance." 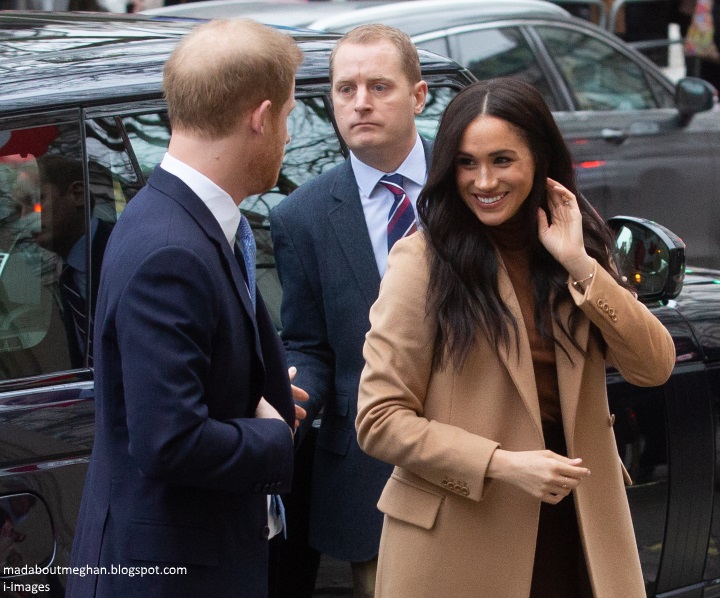 They were warmly greeted by the High Commissioner. 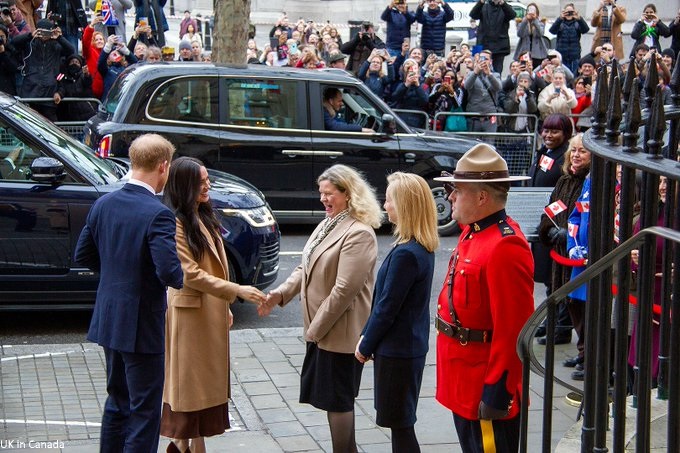 Harry, Meghan and Archie returned to their Windsor home, Frogmore Cottage, just days ago following a six-week break on Vancouver Island. By all accounts, they had a wonderful Christmas surrounded by close friends and Meghan's mother Doria Ragland. During their time there, they enjoyed taking in the stunning scenery during walks with Archie and hikes with friends. On New Year's Day a young couple were out during a hike when a woman approached them and asked if they needed help taking their photos. Asymina Kantorowicz told People: "I’m a Suits fan and I first noticed Abigail Spencer and then I looked up and realized it was Meghan taking the photo. Then I looked back at the group and realized Prince Harry was there too!" CTV News adds: "The Victoria woman says Meghan was 'super friendly' during the encounter and she appreciates that the royal took the time to stop to help them out. 'We didn't want to make a big deal of it. We hope they're enjoying their family trip to the island.'" 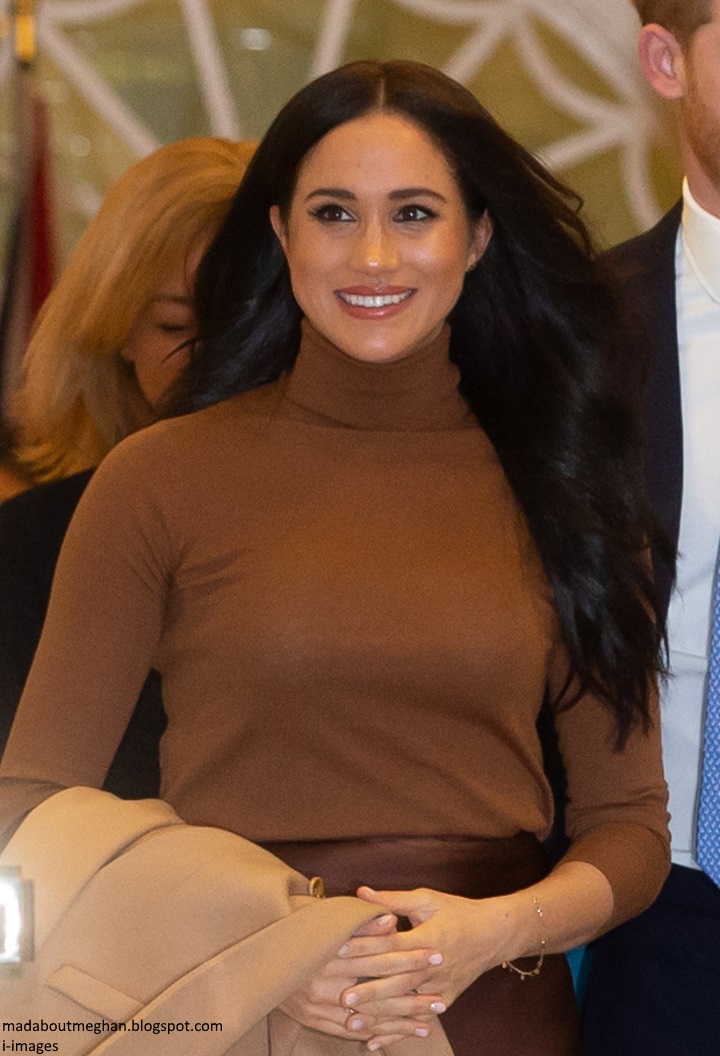 I think they both greatly appreciated the privacy they were afforded in Canada and the chance to recharge after a difficult year. The visit to Canada House is both a courteous choice and perhaps indicative of the year ahead. I have no doubt an official tour of the country is on the cards for this year and Victoria, Canada is a front-runner to host the Invictus Games in 2022. Today was also an opportunity to highlight the links between the country and the UK. Buckingham Palace noted: "The UK is home to a vibrant and diverse community of expat Canadians. Up to 500,000 Canadians currently live in the UK, a figure that reflects the strong, historic and enduring bond between the two countries." Reporter Omid Scobie understands we'll be seeing Meghan focusing quite a bit on her role as vice-president of the Queen's Commonwealth Trust throughout 2020. 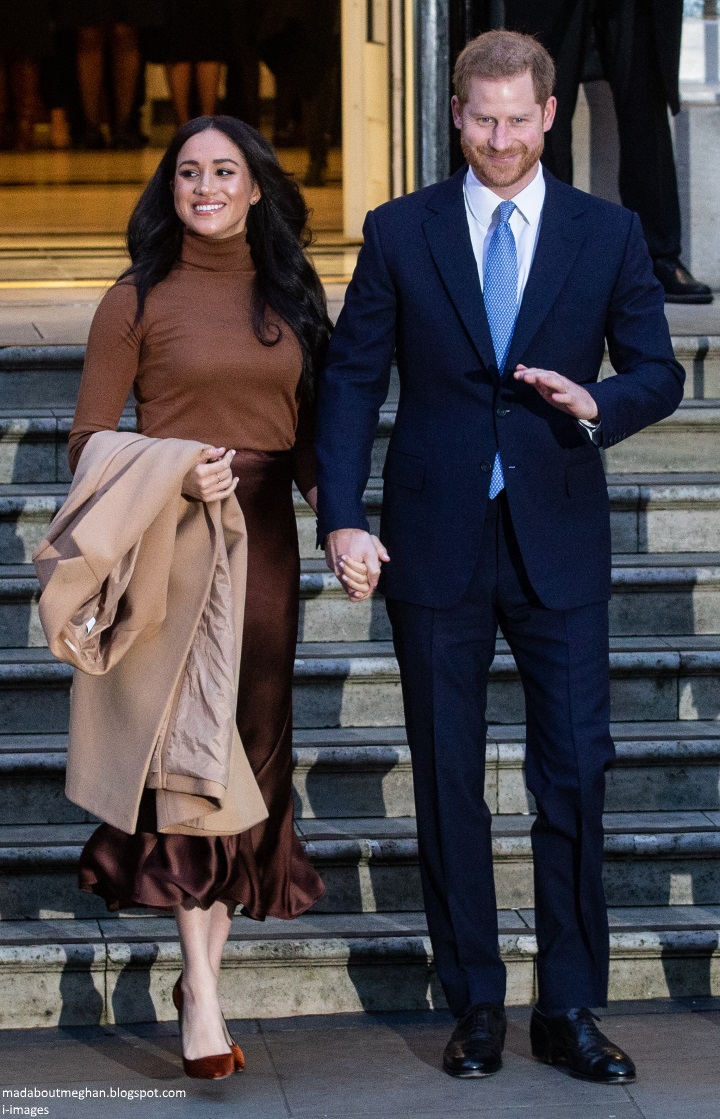 Additionally, the couple are looking forward to launching their own charitable vehicle, Sussex Royal, in late spring and the Invictus Games in Amsterdam in May. 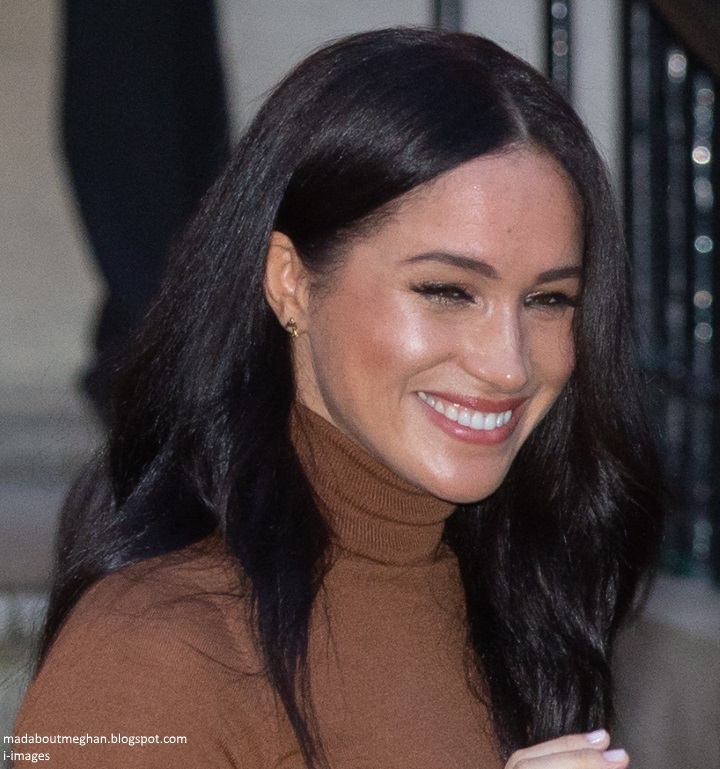 'On the way into Canada House the couple met some of the employees who were standing outside. Harry asked them if they’d all had good holidays. “Meghan said it was beautiful,” Jamie Weare said. “They seemed really relaxed and happy.” Adds her colleague Sumira Osmin, “They are just beautiful and just their aura…they are always so positive and very friendly.” 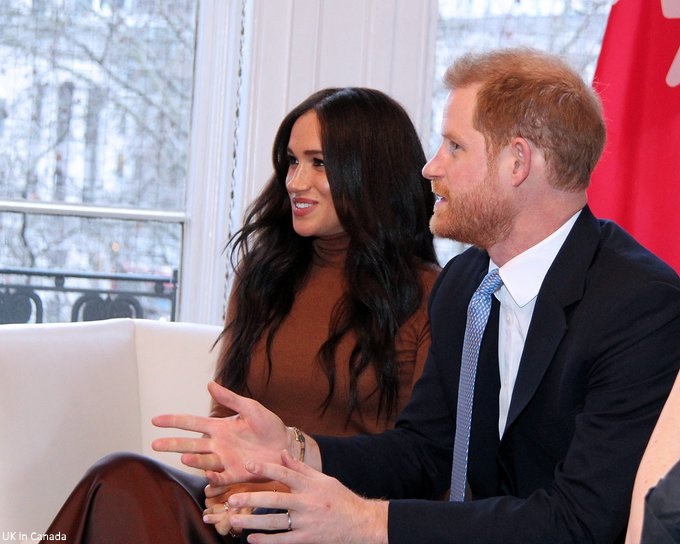 The Canadian dessert requires no baking and is named after a city in British Columbia (the province Harry, Meghan and Archie stayed in). It consists of several layers including chocolate, custard, wafer and coconut. 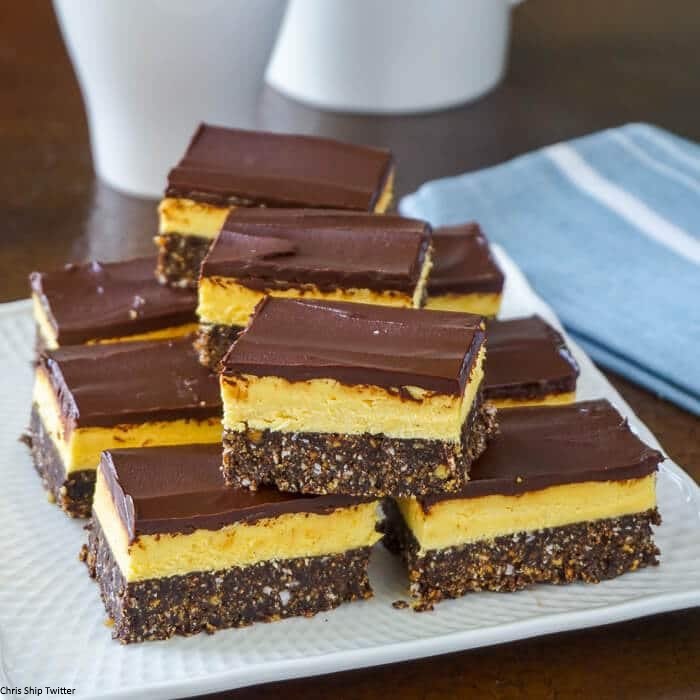 The High Commissioner spoke about the meeting and topics discussed. More from Victoria Murphy:

'The High Commissioner described the royal couple’s visit as a “chance to catch up, hear a bit about their visit to Canada and their holidays in Canada, and their impressions.”

She added that she discussed with them “what they see in terms of their priorities for the next year,” pointing out: “There’s a lot of areas where they have interests which are also priorities for Canada.” Citing topics such as gender equality and gender empowerment, homelessness, mental health and youth engagement, Charette said she thought there “will be some opportunities for us to think about Canada House and the Sussexes doing some interesting work together.”

She also spoke about the couple’s down time over their break. “The fact that they were able to go to Canada to enjoy the holiday season with friends and family and basically to have privacy and be undisturbed and to be able to enjoy peace and tranquility and the beautiful country, I couldn’t be happier,” she said.'


The couple met members of the High Commission team who work in a range of sectors supporting the partnership between Canada and the UK.

From there, they visited the Canada Gallery and viewed a special exhibition by Indigenous Canadian artist, Skawennati.

The multimedia artist is best known for her online works that explore contemporary indigenous cultures. Her Machinima series TimeTraveller™ has episodes on the death of Mohawk saint Kateri Tekakwitha, the Dakota Sioux Uprising of 1862 and other watershed events in Indigenous history. 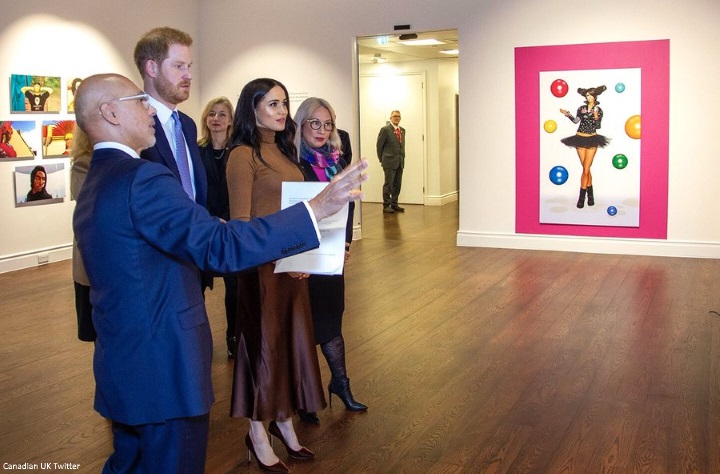 More on the artist:

'Born in Kahnawake Mohawk Territory, Skawennati graduated with a BFA from Concordia University in Montreal, where she is based. She is Co-Director of Aboriginal Territories in Cyberspace (AbTeC), a research network of artists and academics who investigate and create Indigenous virtual environments. Their Skins workshops in Aboriginal Storytelling and Experimental Digital Media are aimed at empowering youth. In 2015 they launched IIF, the Initiative for Indigenous Futures.'


Before leaving, Harry thanked staff for the "warmth and hospitality" they received in Canada. Meghan added: "To see Archie go 'ahhh' when you walk by and just see how stunning it is - so it meant a lot to us." 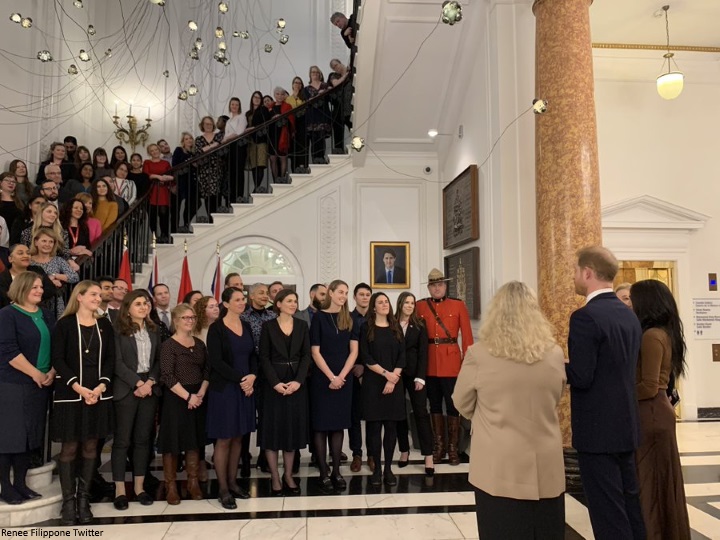 “What a beautiful place you live,” said Harry, thanking staff for the Canadian warmth and hospitality, which he called “unbelievable.” “That was exactly why we chose Canada,” he said. “My wife will now finish in French,” he joked to laughs.
“It was just such an incredible time (we were) grateful to have there, and with our son too,” said Meghan, adding that their eight-month-old son Archie seemed in awe of the beauty of B.C.

Some insiders have speculated that the couple may announce an official royal tour across Canada as there has been a “longstanding invitation” from the government since their wedding,"


You can hear the couple addressing staff in the video below.


And time for a group shot. 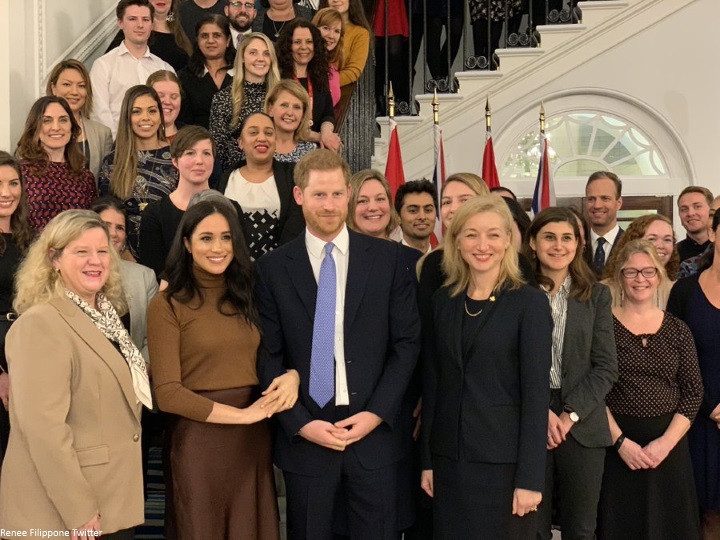 Readers will recall Harry and Meghan last visited Canada House on Commonwealth Day last March where they met and spoke with young Canadians from a wide range of sectors. It was one of Meghan's last engagements before maternity leave, during which she wore a green Erdem ensemble. 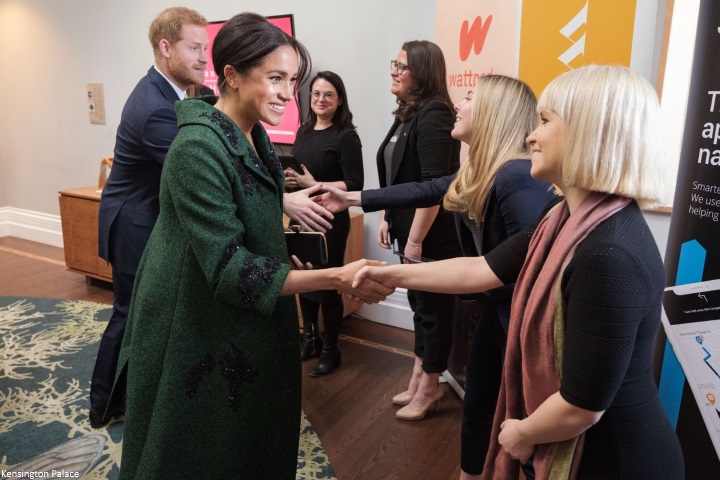 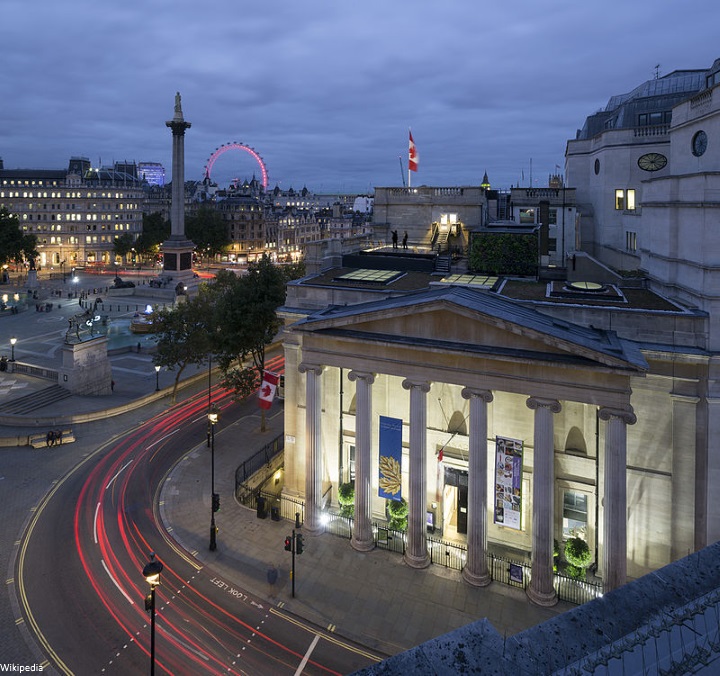 It was officially opened by Harry's great-great-grandfather, King George V, in 1925. The King said: "Canada is a great country: alike in the literal sense of vast extent from 'sea to sea' and great in achievement and in promise: and it is right and necessary that its official representatives here should be housed in a manner worthy of the Dominion and adequate to the discharge of their ever-growing and important duties." 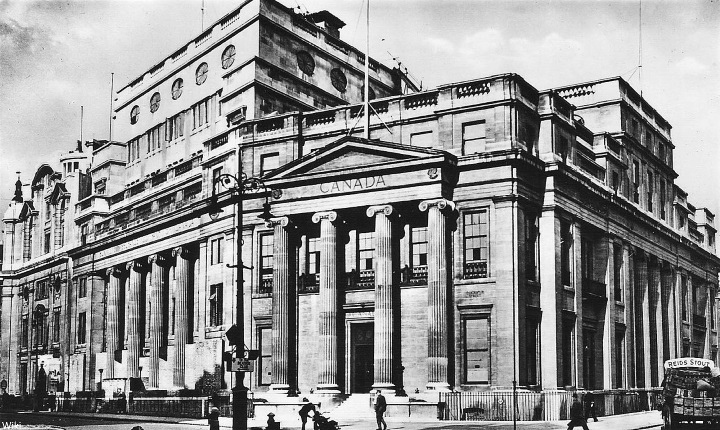 Meghan wrapped up in the Sabel Coat by Reiss (with thanks to Emma for spotting the label as the Duchess left). It is described as: "Crafted from a luxurious wool blend and cut to a slim fit for a contemporary silhouette, the Sabel overcoat in camel is a cold-weather must-have." The coat retailed for £345 before going on sale for £190 and selling out. It remains available in very limited sizing in red and black at Selfridges. 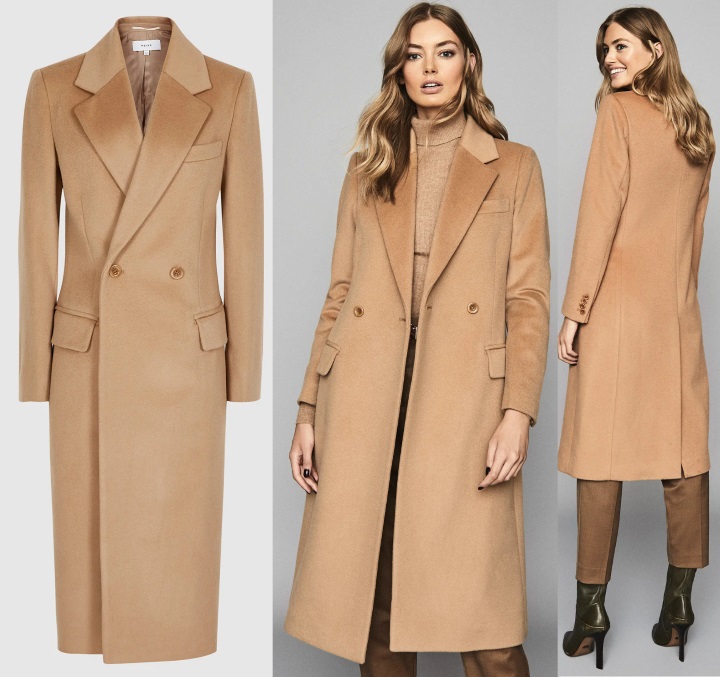 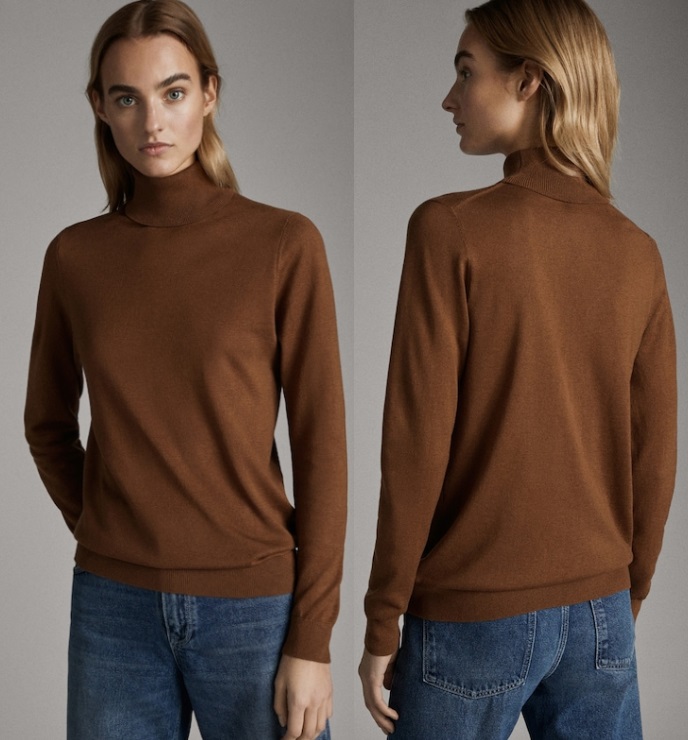 My favourite element of the outfit is the Satin Midi Skirt. The cut of the A line piece is just lovely. It's available for £89. 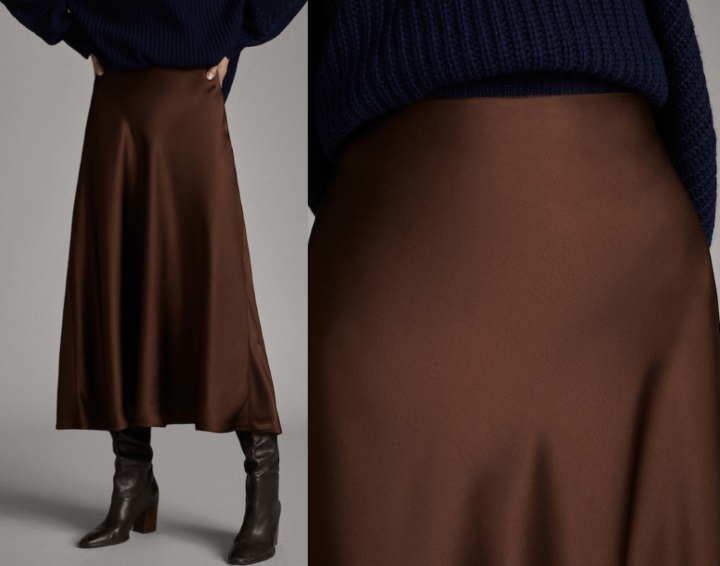 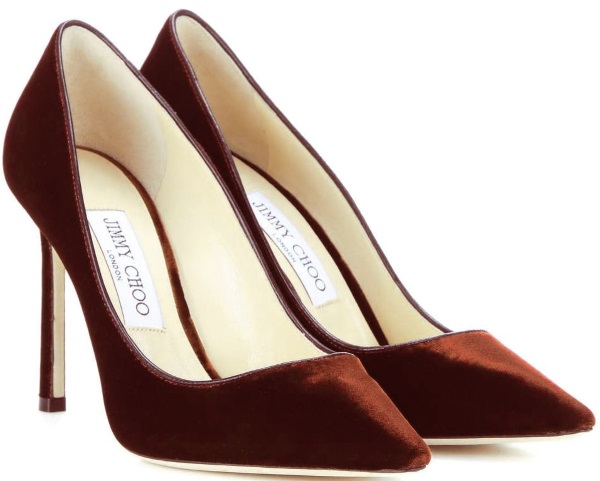 The Duchess accessorised with her Kismet by Milka full circles bracelet. 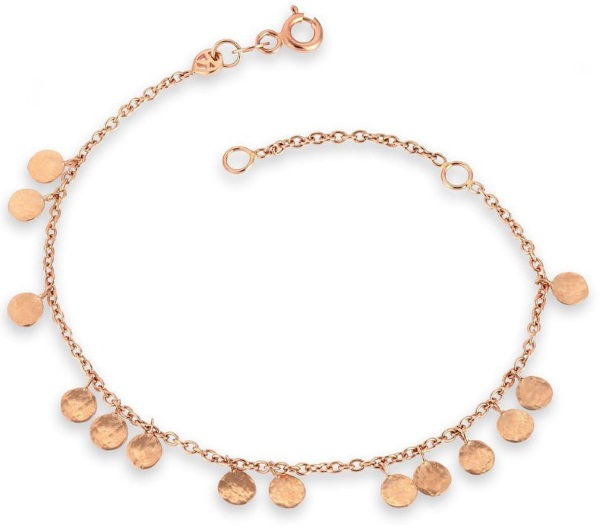 And a pair of Catherine Zoraida Swallow Stud earrings (with thanks to Meghan's Mirror). 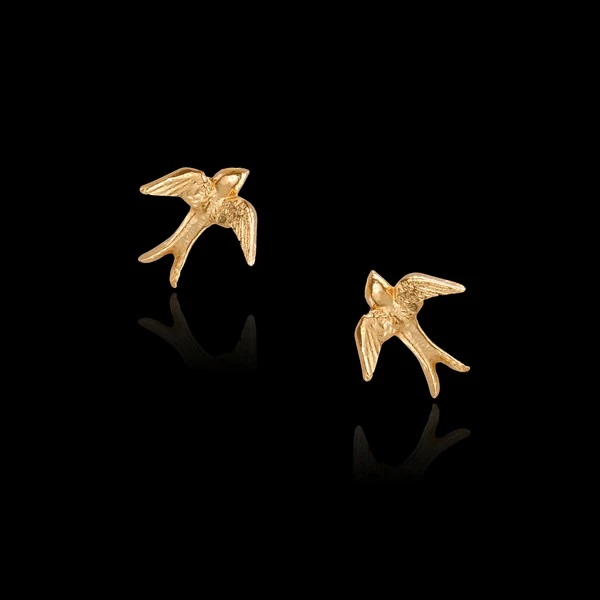 It was splendid to see Harry and Meghan back and looking refreshed and happy.

The Telegraph notes the couple attended meetings at Buckingham Palace this morning and have "several engagements in the diary for next week". When asked how the couple are, an aide from their team said: "Invigorated, excited. The team were all excited to see them this morning."