In a surprise appearance, the Duchess of Sussex joined her husband at Queen Elizabeth Olympic Park this evening for the first game of the Major League Baseball (MLB) London Series at London Stadium which saw the Boston Red Sox take on the New York Yankees.

Although the Duchess is on maternity leave until the autumn, palace aides informed reporters we would see her attend several events over the summer. The event is Meghan's second official appearance since Archie's birth. We first saw her at Trooping the Colour, the Queen's annual birthday parade, earlier this month. The new mother looked absolutely radiant, and she and Harry looked incredibly excited upon arrival. 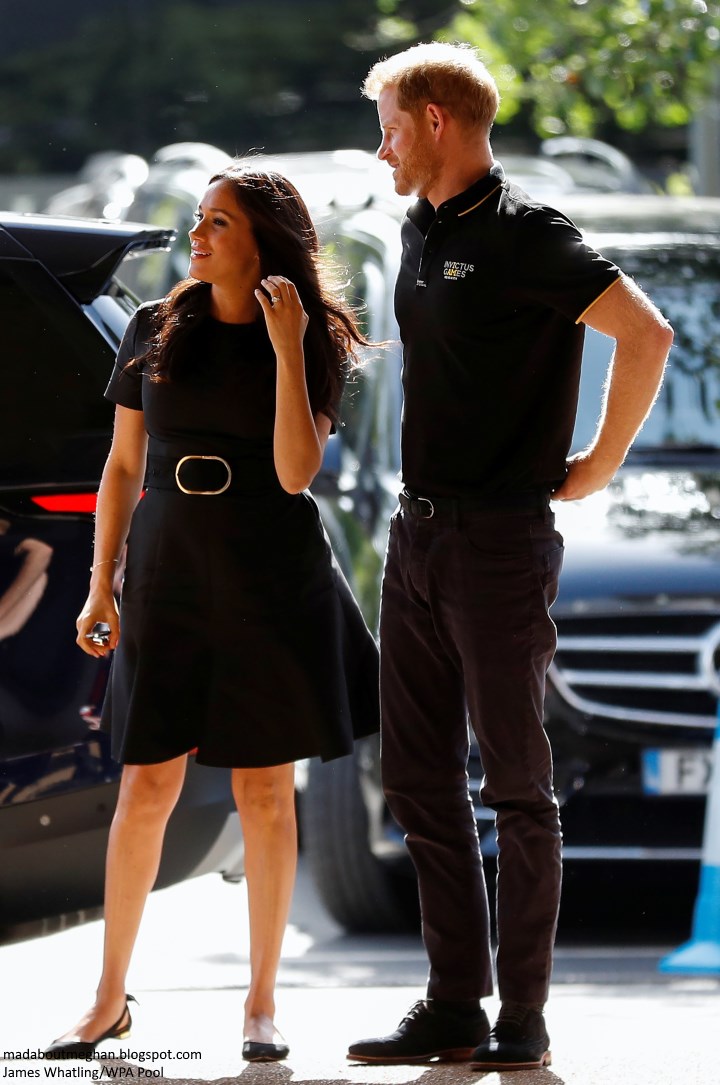 This was an ideal event for Meghan, who has been a longtime fan of the game; we've seen her sporting Los Angeles Dodgers, Chicago White Sox and New York Yankees baseball caps. In more recent years during her time in Toronto, she cheered on the Toronto Blue Jays and was pictured attending games on several occasions. 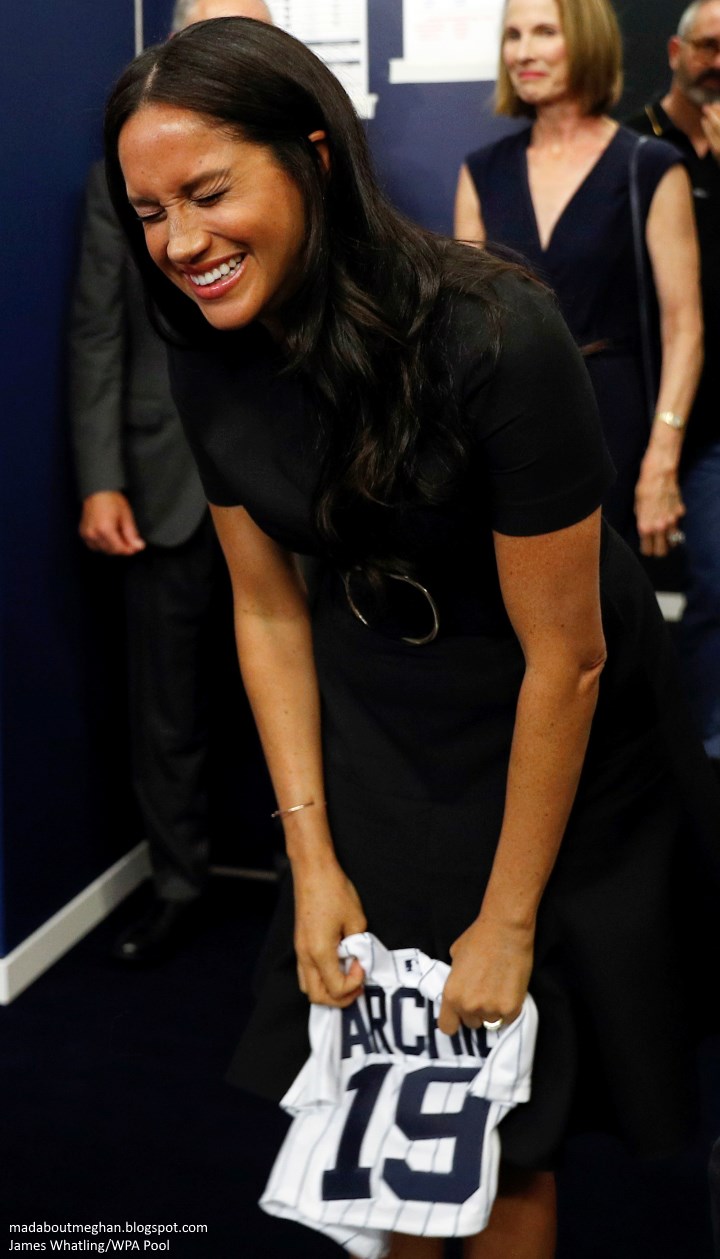 There's another very special reason Meghan's present tonight: this is the first time that Major League Baseball are hosting two regular season games in Europe. Major League Baseball recently announced that the Invictus Games Foundation is an Official Charity Partner of the Mitel & MLB Present London Series 2019. Invictus is at the very heart of Harry's work and fundraising is a very important element for its foundation. During the closing ceremony in Sydney last October, the Duchess said: "It is such an honour to be here tonight celebrating all of you, and supporting my husband in the Invictus Games, which he founded four years ago. In that short span of time, the Games have evolved into an international platform of some of the best athletics and sportsmanship you could ever witness, coupled with a camaraderie and close-knit sense of community which can only be defined as the Invictus Spirit. With that said, and on a very personal note, I just wanted to thank all of you for welcoming me into the Invictus family. I am truly so grateful to be a part of this with each and every one of you." 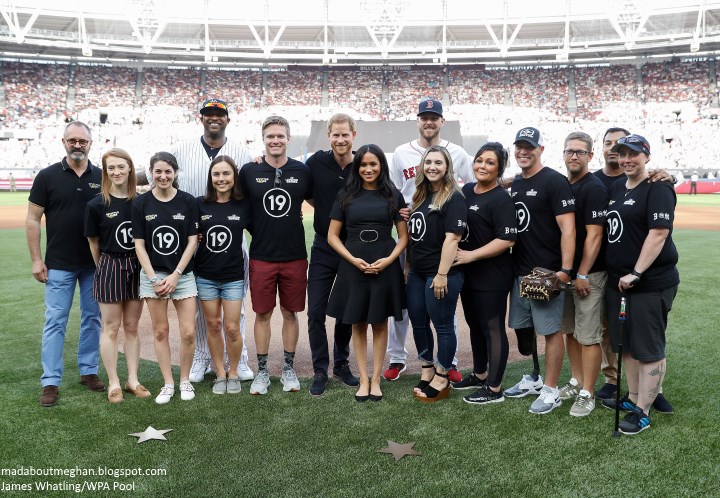 Buckingham Palace added: "The Invictus Games Foundation is the international charity that oversees the development of the Invictus Games, an international adaptive multi-sport event in which wounded, injured or sick armed services personnel and veterans participate. It celebrates the power of sport in recovery and how it can help, physically or psychologically, those suffering from injuries or illness. As part of the partnership, the Invictus Games Foundation have a team participating in London’s Softball60, the social softball series built for the city and targeted to introduce the sport to new audiences and demonstrate that it is an inclusive sport."

Following their arrival it was time to visit the Boston Red Sox and New York Yankees in their clubhouses. 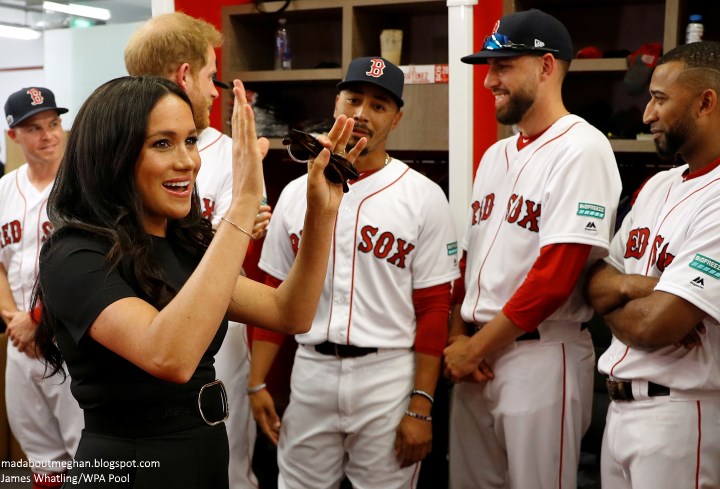 The couple received several gifts for Baby Archie including this darling jersey from the New York Yankees. 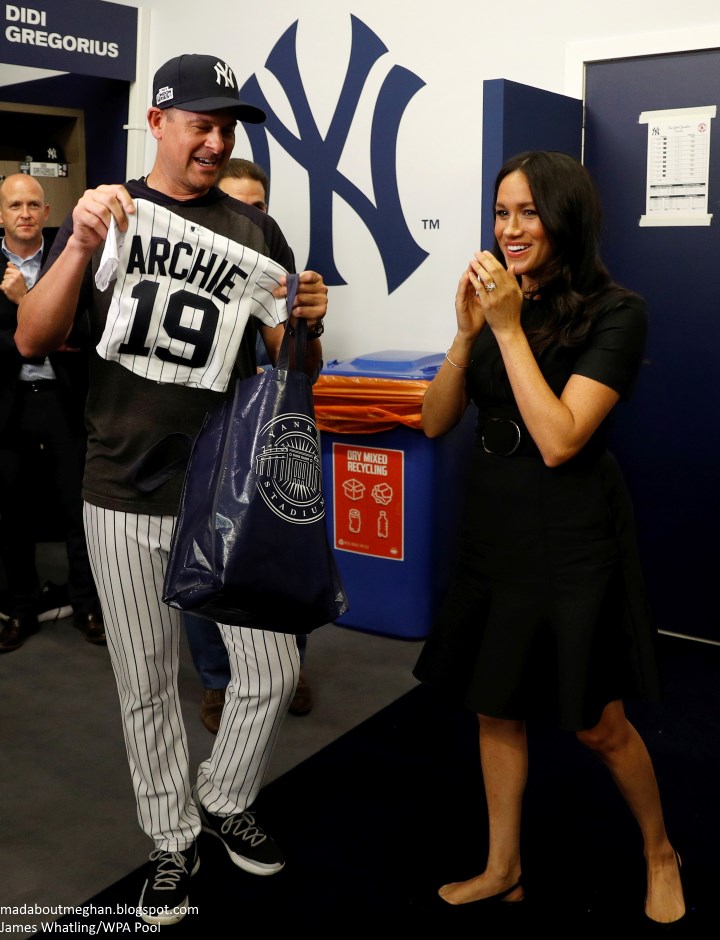 One can safely say Meghan was thrilled with the present :) 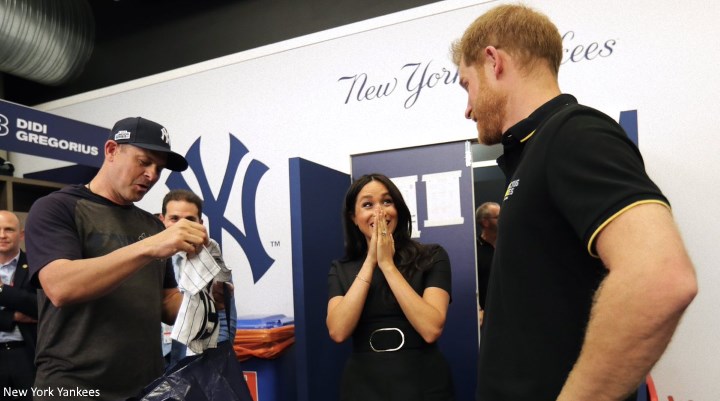 I suspect Archie will be sporting a baseball jersey or two in the near future. 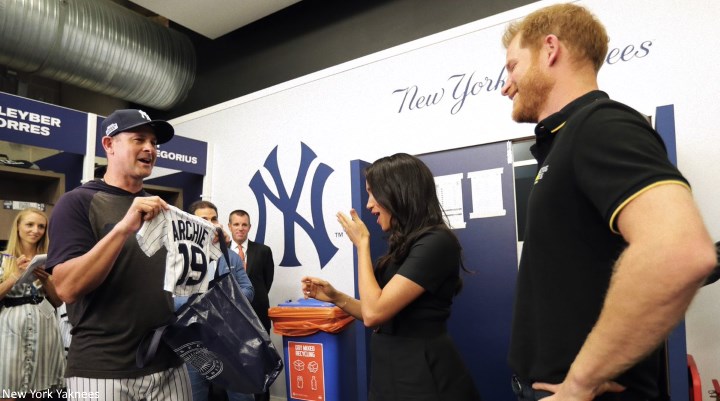 Time for a group shot. 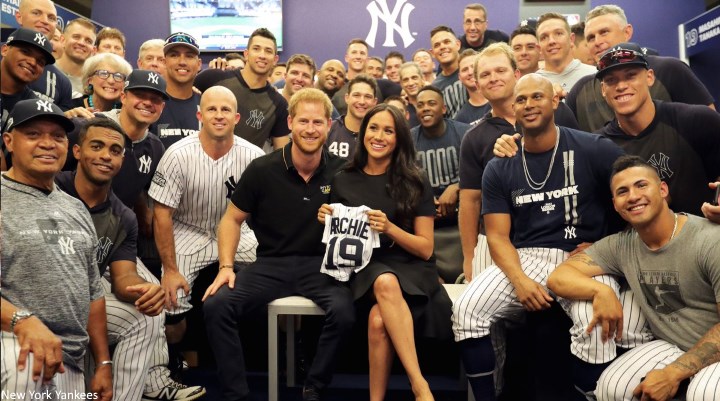 Whilst meeting Red Sox player Mookie Betts, the outfielder told the Duchess he understands they are in fact distant cousins. Speaking about the meeting, Betts said: "Yes, I'm related to Meghan Markle. I did get to meet her; she gave me a hug." In 2018 Mookie became the first player in Major League history to win the Most Valuable Player, Silver Slugger, Gold Glove, batting title, and World Series in the same season. 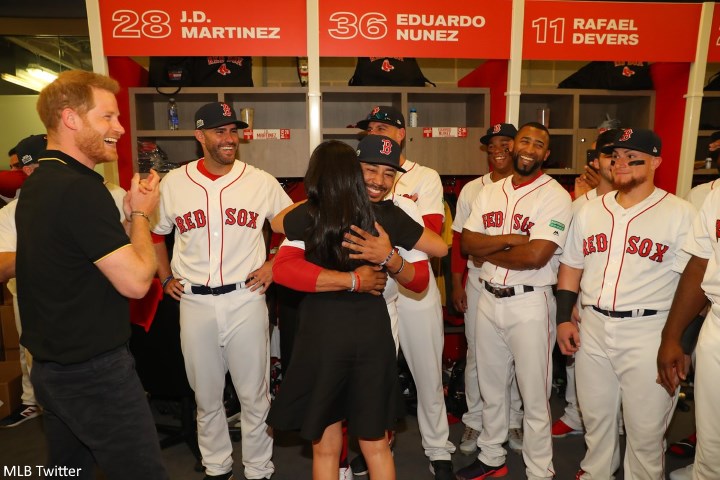 'According to Jim McNiff, an amateur genealogist from Massachusetts, it's entirely possible that the two are related. Betts and Markle apparently had ancestors that lived side-by-side in Alabama in the 1870s who shared the surname of "Betts." Though there's no definitive answer as to whether or not they're properly related, all signs point to that being the case.'

'Meghan hugged Red Sox's Mookie Betts after he told the Duchess that they are distant relatives. According to The Boston Globe, their ancestors are from the same part of Alabama.

Mookie gave up trying to explain and said, laughing, "We're family somehow!" Players around them cheered and Harry asked, "does anyone else here want to claim to be family?"


Harry joked "if you're in need of a bowler" much to the amusement of the team. 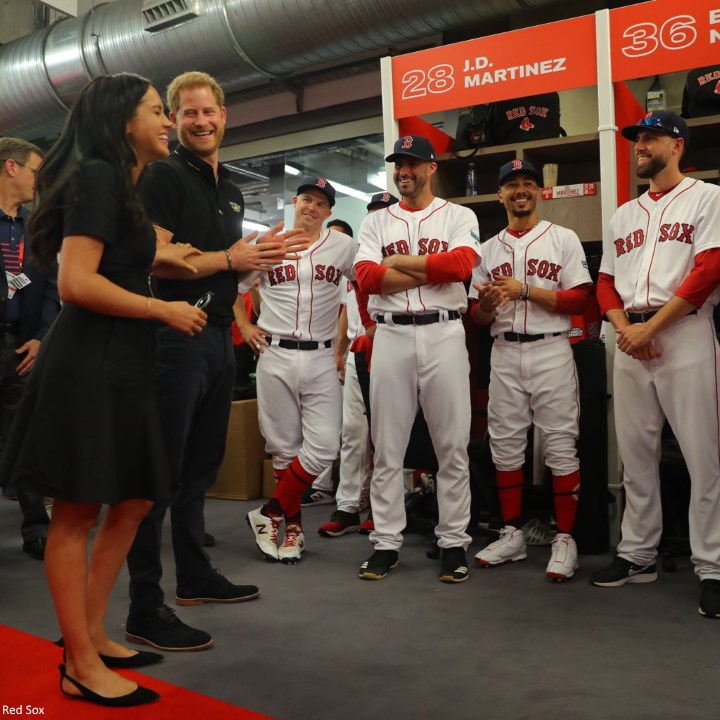 From there, the couple joined a reception with UK and US former Invictus Games competitors and their families and friends. Guests included many participants the couple met before. They chatted about preparations and the road ahead to Invictus 2020 which will take place in the Netherlands. 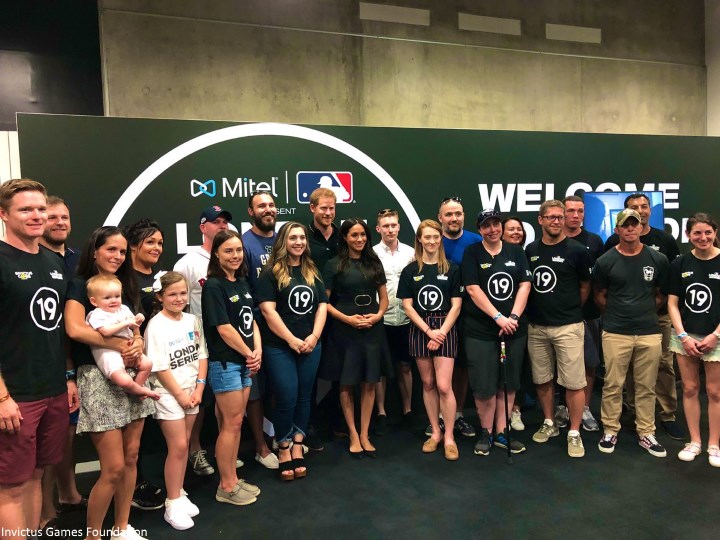 Harry and Meghan accompanied several Invictus Games competitors onto the pitch as they made the first pitch. 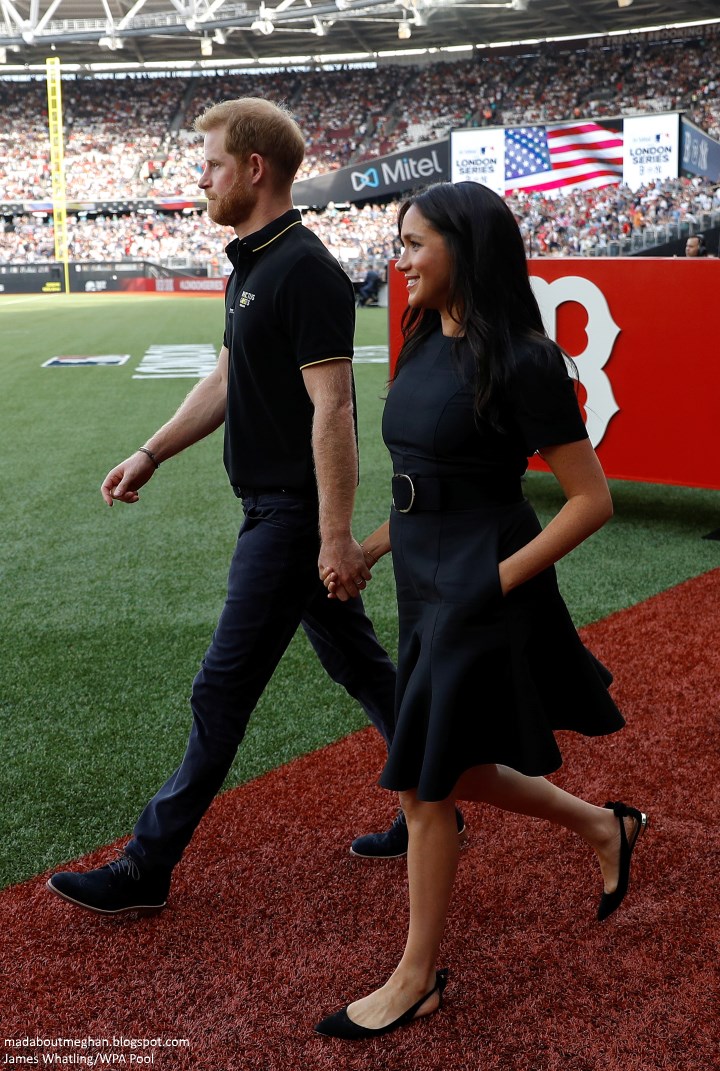 During the Invictus reception Harry revealed he and Meghan had a "sleepless night". Meghan later joked she was relieved not to be asked to throw the first pitch after the late night. 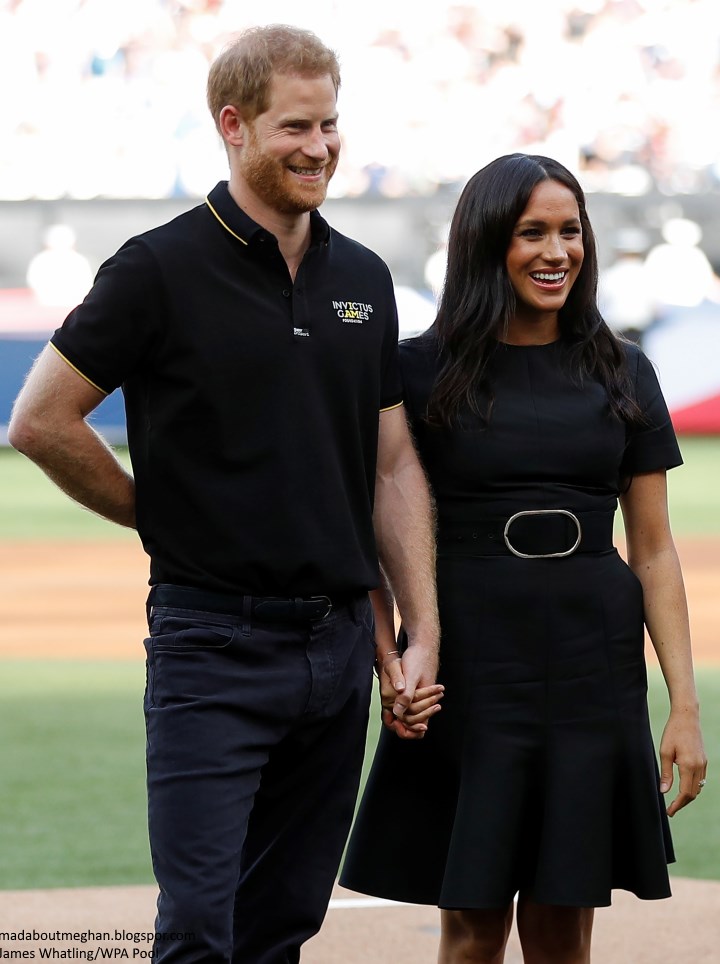 'After meeting both teams, the couple moved across to a reception of Invictus athletes where the couple met adorable nine-month old Raphaella, who was making a lot of noise. Her mother, Bianca Rainbow-Jones, later revealed that Harry had confessed they had had "a sleepless night." Bianca was there to support her husband, Nathan Jones, who is in the Air Force.'


I think we have a very strong contender for photo of the day. 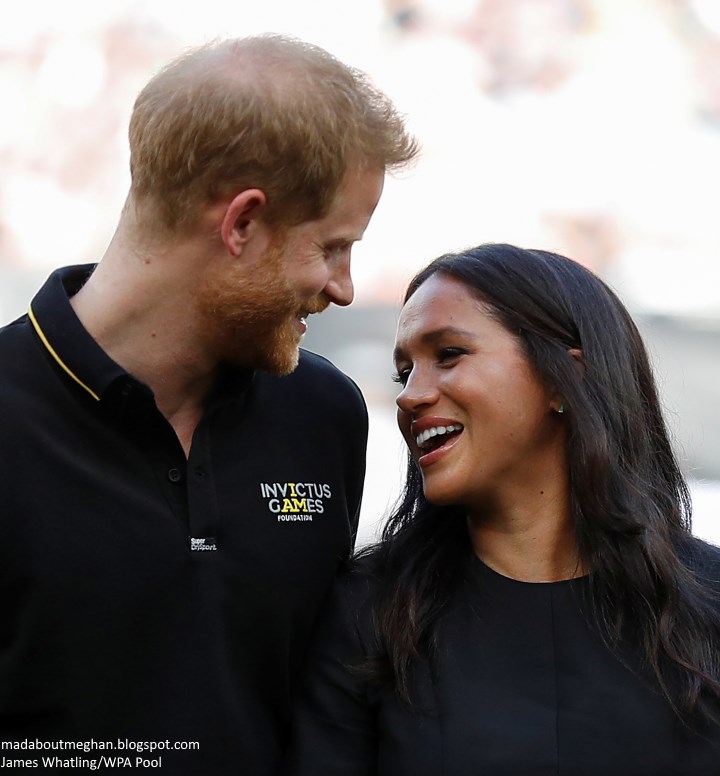 A video from BT Sport. 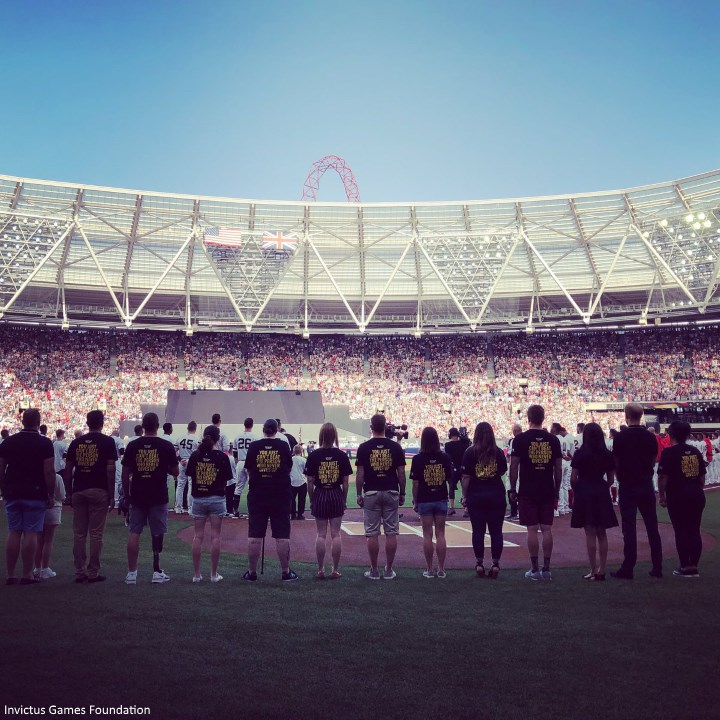 Before the game, Maya, the daughter of one of the Invictus competitors placed the game ball upon the pitchers mound in front of 60,000 spectators. 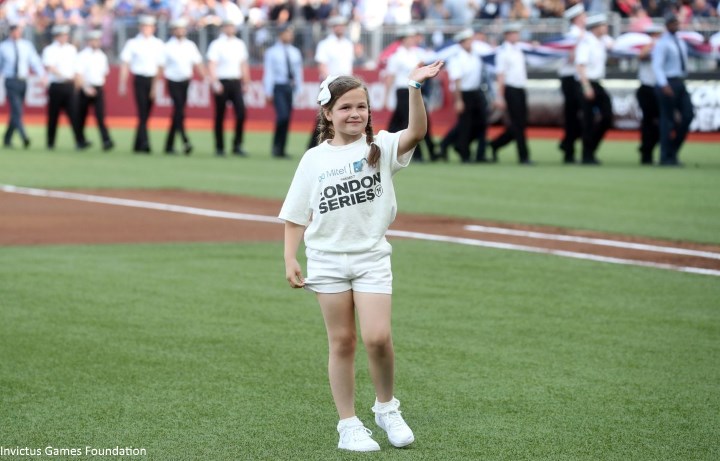 The Kingdom Choir, who performed so beautifully at Harry and Meghan's wedding, sang the national anthems of both nations. 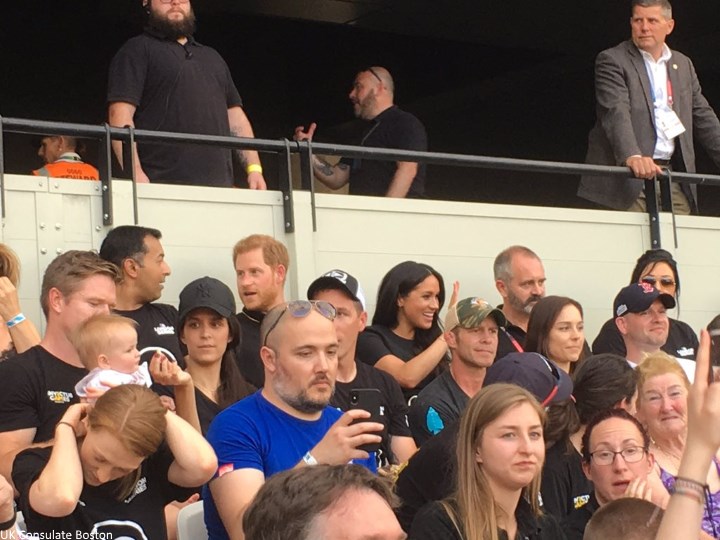 More from Sussex Royal Instagram: "On this Armed Forces Day, tonight’s event was also a chance for Their Royal Highnesses to shine a light on the men and women here in the UK and around the world who have sacrificed so much for their country." 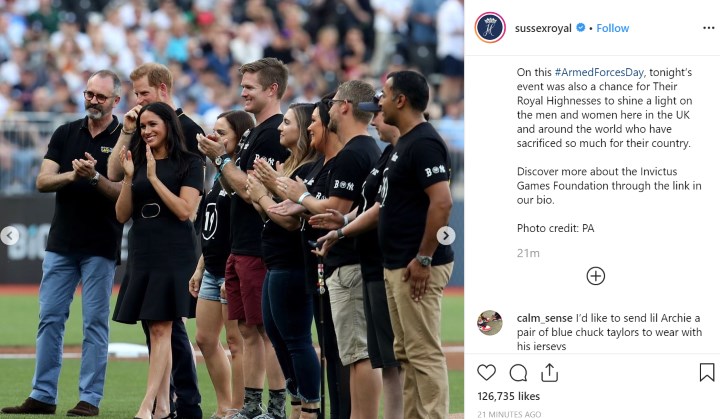 Sussex Royal made its Instagram Stories debut with a behind-the-scenes video.


It was a great night for Yankee's fans as the New York team won the first game of the series. 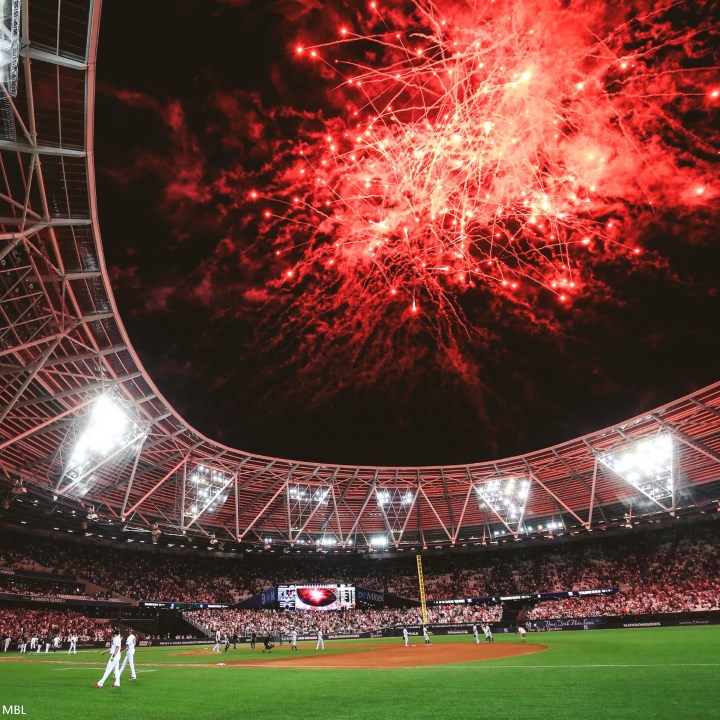 It's a real treat to see these two together again. They are both clearly relishing every moment of parenthood and despite the sleepless nights, they've never looked happier. 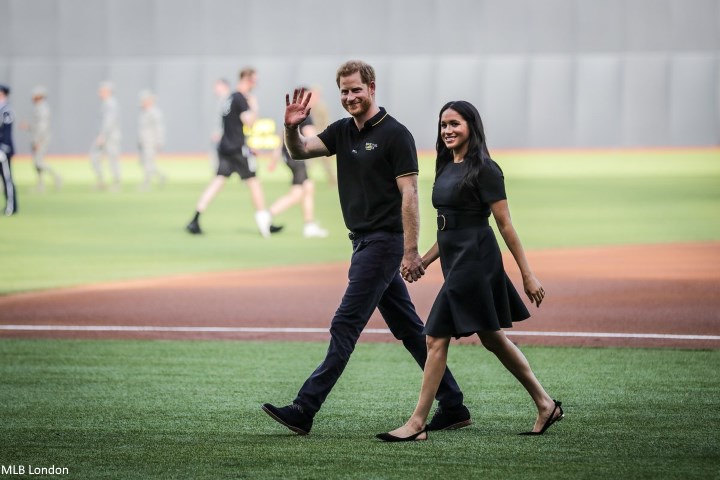 A 4 minute video from the event including Meghan's meeting with Mookie Beets.


Meghan looked effortlessly chic in the Stella McCartney Belted Keyhole Dress (with thanks to Innominate). The relaxed style of the dress paired with the flats and Meghan's long hair made for a gorgeous look. Meghan and Harry were impeccably coordinated, with the Prince wearing his black Invictus shirt.

The dress is described as "featuring a round neck, short sleeves, belt loops, a rear zip fastening, a belted waist, a flared skirt". Meghan's piece was customised to remove the keyhole detail. Stella McCartney is one of Meghan's go-to designers ever since the queen of sustainable fashion created her timeless halterneck wedding reception gown. 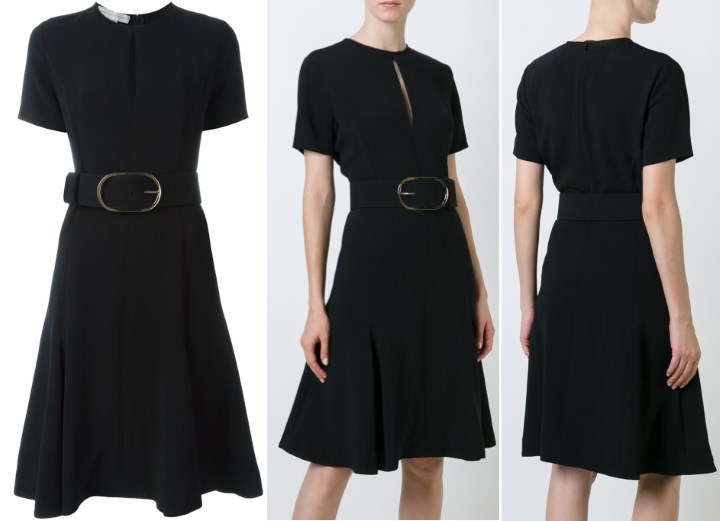 Meghan teamed the dress with the Aquazzura Deneuve Pointy Bow flats. They are currently available at Nordstrom. The Duchess owns several pairs of the 'Deneuve' high-heel style; they are very much a signature we see her choose time and time again. 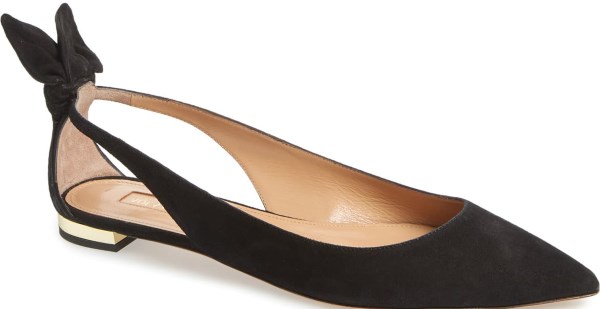 The Duchess accessorised with a new pair of turquoise and gold earrings. Anne suggests they are a style by Jennifer Meyer. The $395 earrings are described as: "Jennifer Meyer's pieces are the perfect way to celebrate life events or mark important milestones. Handcrafted from polished 18-karat gold, these dainty earrings have a sleek rectangular shape that's inlaid with brilliant turquoise stones." They are available at Net-A-Porter. 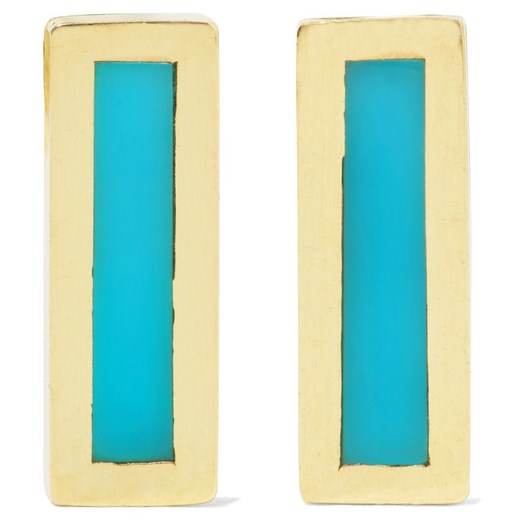 Meanwhile, there's been quite a bit of talk about alterations to Meghan's engagement ring of late. It turns out it was all part of a very special anniversary surprise from Harry. Much like the engagement ring, Harry was hands-on every step of the way with Meghan's eternity ring. 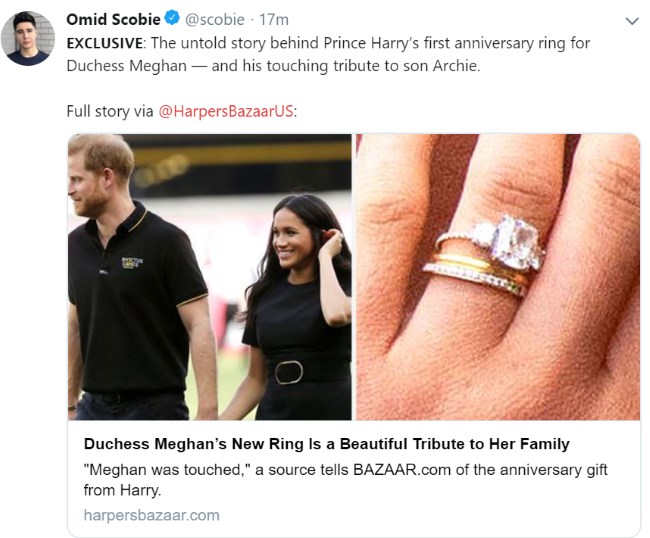 'While creating the bespoke conflict-free diamond eternity band, Harry paid tribute by having Schwartz add birthstones for Meghan, Archie, and himself on the underside of the delicate piece.

“Meghan was touched,” a source says of the May 19 anniversary surprise, which features a flawless green emerald for Archie, a blue sapphire for Harry, and an olive-green peridot stone for the duchess. “A lot of thought went into it," the source reveals.

Each birthstone is said to have its own meaning and significance, with sapphires believed to protect those close to you from harm, peridots said to instill power in the wearer, and emeralds considered a symbol of rebirth and love.

While working closely with the famous Los Angeles-based jeweller, the prince also took the opportunity to have Meghan’s engagement ring—which features two stones that once belonged to Princess Diana—resized and reset with a new delicate diamond band.'