UPDATED: The Duchess to Partner with Leading British Retailers in Support of Smart Works & Harry in Vogue

The September issue of British Vogue is the gift that keeps on giving. We've been treated to an array of beautifully written pieces, behind-the-scenes video and images, and introduced to inspiring women and businesses striving to make their corner of the world a better place. This evening, perhaps the greatest of those gifts was revealed. In our post last night, we chatted about Meghan reaching out to Edward Enninful to discuss the outstanding work her patronage Smart Works is doing. A conversation which stemmed from a desire to maximise her impact as patron led to the Duchess guest-editing British Vogue. Smart Works was on Meghan's mind every step of the way though, and in a piece about the organisation 'The Smart Set', the Duchess revealed she has partnered with several leading British retailers to launch a capsule collection of workwear to benefit the charity.


The Duchess writes she was drawn to Smart Works because it "reframes the idea of charity as community" which she described as "incredibly important" to her. "It's the enthusiasm of the volunteers, the earnestness of the staff" and "the blushing, bashful and beautiful smiles that crosses a client's face when she sees herself in the mirror" that Meghan found so profoundly compelling. Throughout her many visits to the charity, Meghan noticed the mismatched sizes and colours. To help with this, she formulated a plan. "I asked Marks & Spencer, John Lewis & Partners, Jigsaw and my friend Misha Nonoo to design a capsule collection for a workwear wardrobe." During the inception of the project, the companies involved agreed to adopt the "one-for-one model" whereby each time a piece is purchased, one is donated to charity. Meghan added: "Not only does this allow us to be part of each other's story, it reminds us we are in it together." 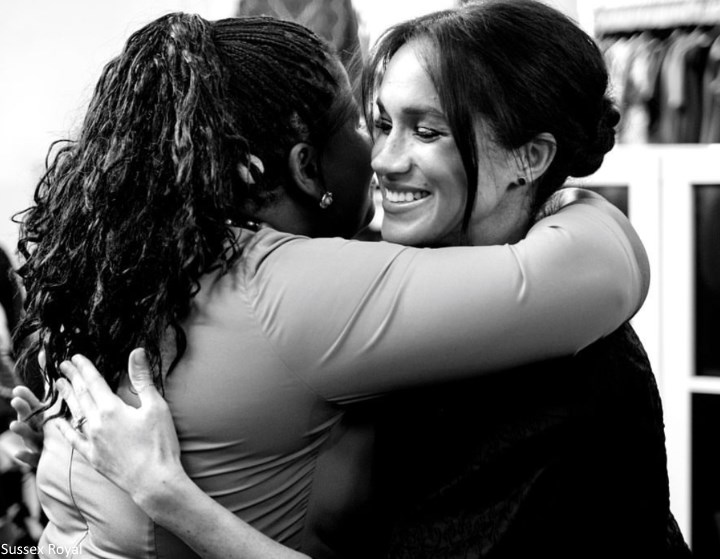 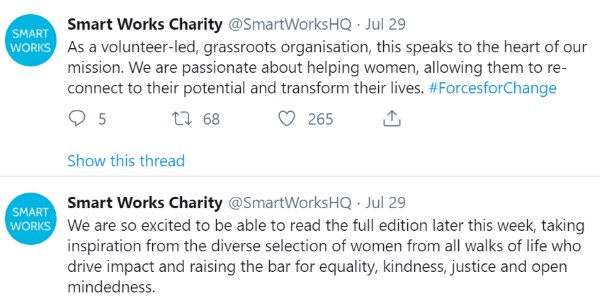 "The capsule collection is an idea that the Duchess came to us with," Kate Stephens, CEO of Smart Works told The Telegraph. "We are hugely grateful to our Patron for driving this collection and for all the difference it will make to thousands of women’s lives across the UK." 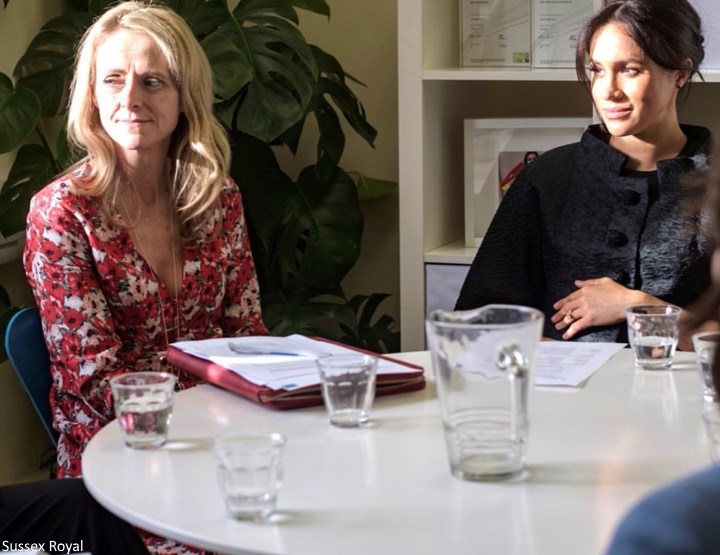 Meghan also touched on a misunderstanding Smart Works is simply about makeovers, writing if one is searching for a cultural reference "it's the story of Wonder Woman, ready to take on the world in her metaphorical and literal cape". The collection will be released later this year. This is going to be hugely impactful for Smart Works, yielding tangible support to enable them to broaden their services across the UK. With the collection due in a matter of months, I suspect the lion's share of preparation and planning took place during Meghan's maternity leave. 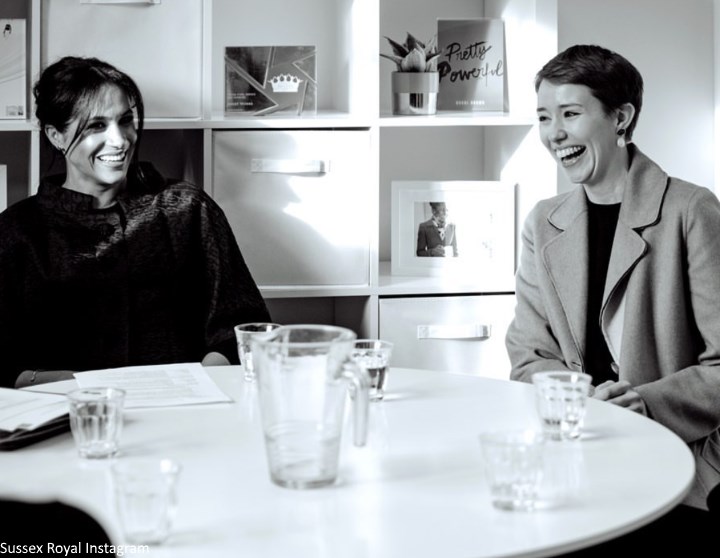 I've said before, in many ways Meghan's actionable approach to her role mirrors that of her father-in-law. It is widely reported Charles has served as a mentor to the Duchess and the two have bonded over their passions for causes closest to their hearts. Almost three decades ago, Charles set up Duchy Originals to sell organic food products. Since then it has become a leading brand in partnership with Waitrose. All profits have gone to charitable causes. Like Charles, Meghan approaches her role with a desire to be as effective as possible. 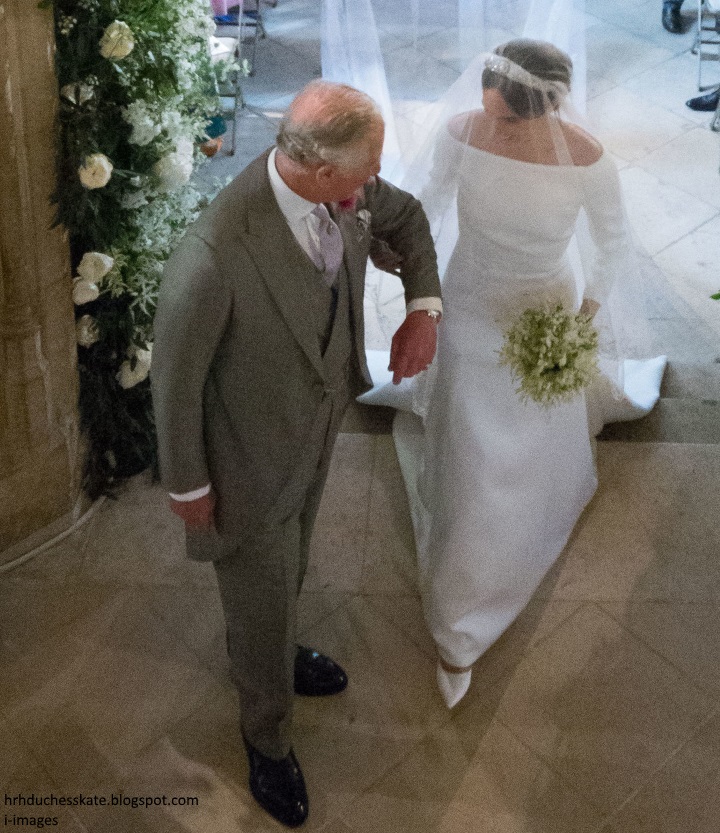 'I was a hairdresser and I was going through a really rough time and I knew I needed a change. I had been in the same salon for 14 years. I should have left years ago but you're a creature of habit - you have to break free. I'd gone to the Job Centre and got an interview for a course to become a carer and they told me about Smart Works.The last time I went for a job interview was 14 years ago so it was a little bit nerve-wracking. I thought, what the hell do I wear? You want to look professional but you don't want to look like your mum.

At Smart Works they make you feel so welcome. They gave me a coffee and biscuits and were talking to me like they've known me for years. I'm not used to being treated this nice. There's something really special about women helping women. I'm usually quite self-conscious but it was like shopping with my sister. I was walking around in my pants. The dress I've got is Marks & Spencer and the bag is Osprey. I love it. As a normal person, living in a house share, getting the wages I get, I would never have been able to afford something like this. My other dresses are from charity shops.

We worked on my interview skills. She told me not to speak so fast, or be nervous making eye contact, and she said "don't twiddle with your hands". Everything she was saying I was writing down. When I went home that night I read through it. I did the interview and aptitude tests and [started] the four-week intensive course.
Now I'm a healthcare assistant at nursing homes and residential homes all over Birmingham. I'm a lot happier now. I've got my life back. I work 40 hours a week but it's flexible. I sent [Smart Works volunteer] Cheryl a picture of me in my work uniform, like: "Look at me. I'm in my work top". Smart Works made me feel wonderful. I would never have picked the dress out for myself but for someone to say "this suits you", it's lovely. It made me feel like I am worth being helped out.'


More from Sussex Royal: "Launching this autumn, The Duchess will be supporting a collective to help equip the women of Smart Works with the key workwear essentials they need as they enter into the workplace. This initiative is supported by four generous brands who share the vision to empower the women of Smart Works to look and feel 100 as they bravely venture in to what can often be a daunting environment for those who have been out of the job market." 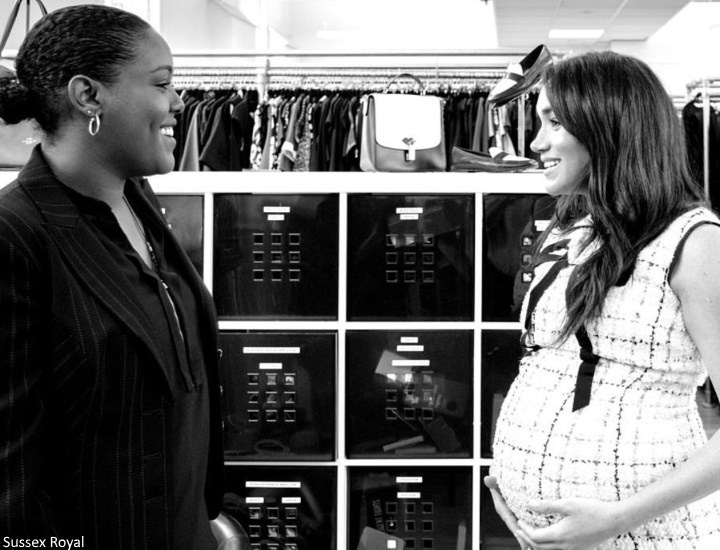 Harper's Bazaar notes the charity has grown markedly since the Duchess became patron. This project is going to be the catalyst to take their efforts to the next step. Smart Works recently announced they will be launching in Leeds to bring their award-winning service to the women of West Yorkshire in the coming months. With news of this collaboration, I suspect they'll have all the resources they need to make this a resounding success. With Meghan on board, I have a strong suspicion Leeds will be one of many new locations :) 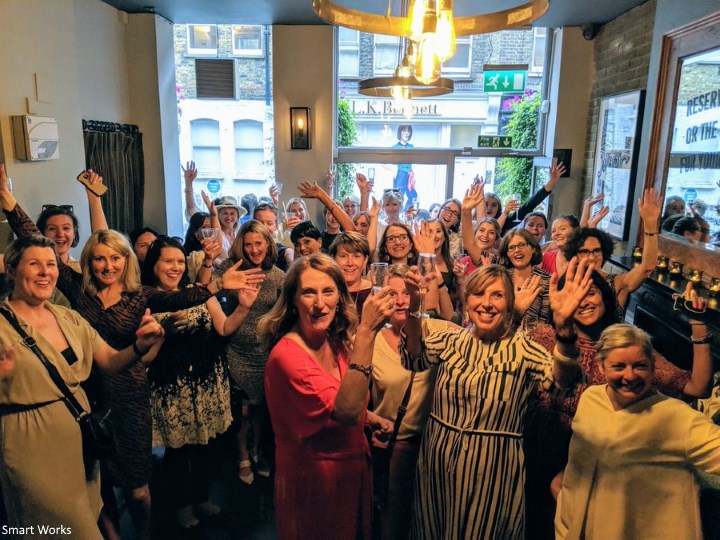 In the images from Meghan's visits to Smart Works, she's wearing her Gucci Tweed dress. 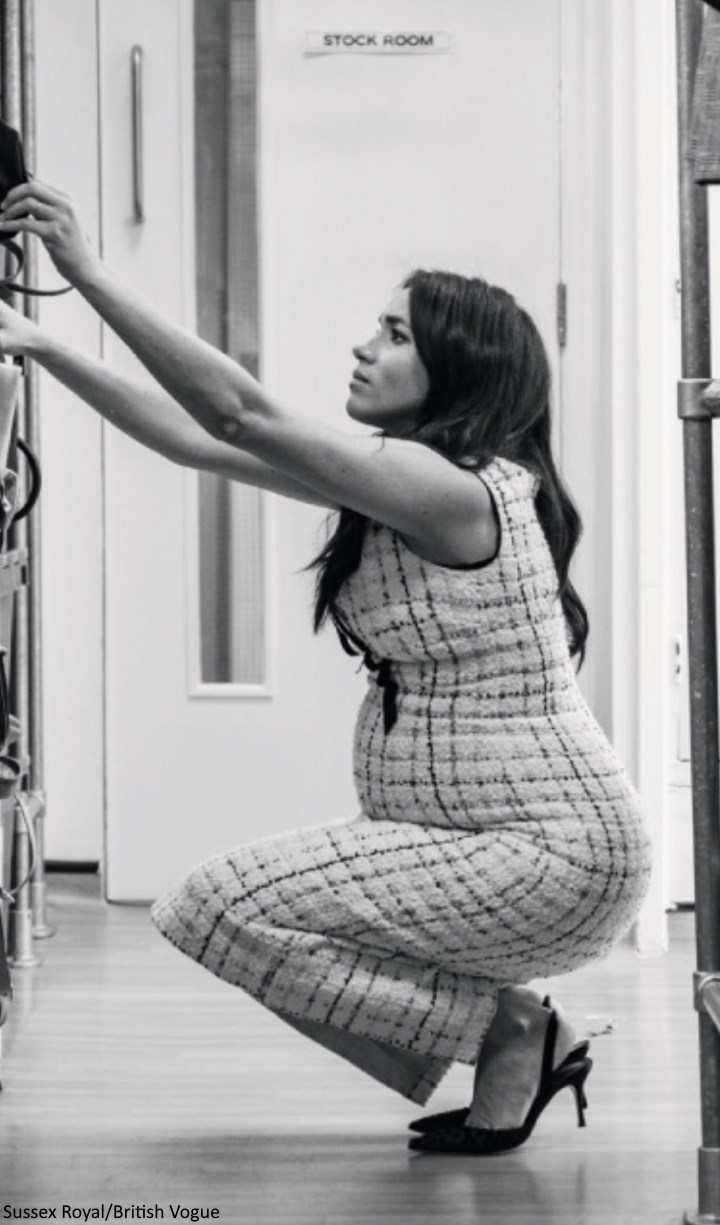 And the William Vintage coat she wore in New York. Meghan teamed it with black jeans and her Aquazzura Deneuve Bow pumps. 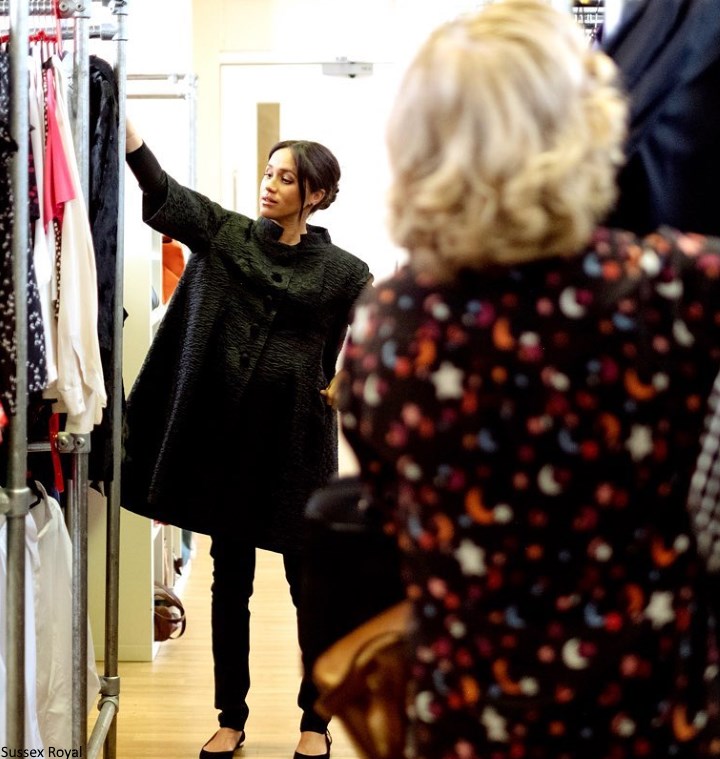 Prince Harry's interview with Dr Jane Goodall was also revealed today. During an overcast day in Windsor, the pair, who have very much hit off since with plans for a charitable collaboration in the works, discussed a number of topics. During the conversation Harry discussed plans to have no more than one more baby, saying: "Two maximum." The piece includes remarkably candid words from Harry. "I think, weirdly, because of the people that I’ve met and the places that I’ve been fortunate enough to go to, I’ve always had a connection and a love for nature. I view it differently now, without question. But I’ve always wanted to try and ensure that, even before having a child and hoping to have children…" 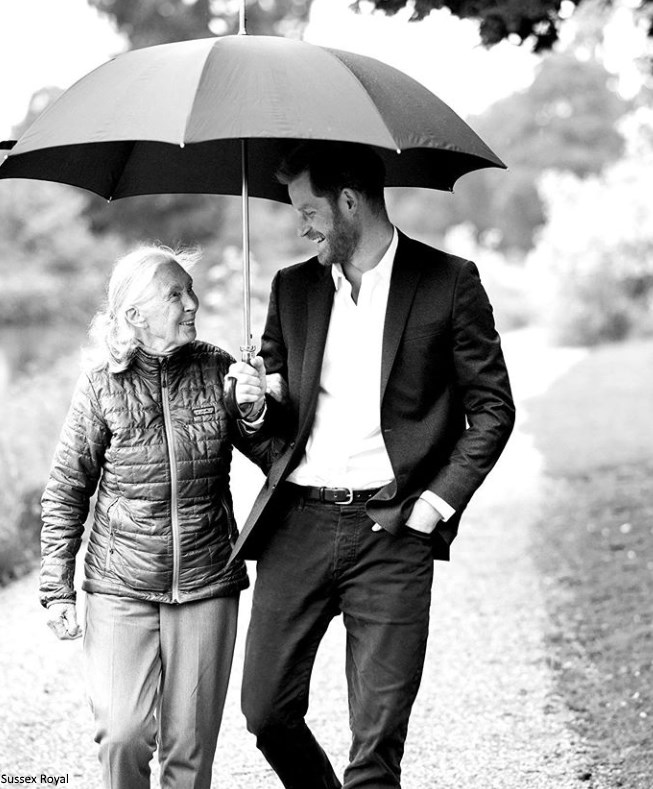 "It’s the same as an unconscious bias – something which so many people don’t understand, why they feel the way that they do. Despite the fact that if you go up to someone and say, “What you’ve just said, or the way that you’ve behaved, is racist” – they’ll turn around and say, “I’m not a racist.” “I’m not saying that you’re a racist, I’m just saying that your unconscious bias is proving that, because of the way that you’ve been brought up, the environment you’ve been brought up in, suggests that you have this point of view – unconscious point of view – where naturally you will look at someone in a different way.” And that is the point at which people start to have to understand."


More from Sussex Royal: "Earlier this summer HRH the Duke of Sussex met with world renowned ethologist Dr. Jane Goodall for an intimate conversation on environment, activism, and the world as they see it. This special sit-down was requested by The Duchess of Sussex, who has long admired Dr. Goodall and wanted to feature her in the September issue of British Vogue, which HRH has guest edited. HRH and Dr. Goodall spoke candidly about many topics including the effects of unconscious bias, and the need for people to acknowledge that your upbringing and environment can cause you to be prejudiced without realising it. The Duke described that “[when] you start to peel away all the layers, all the taught behaviour, the learned behaviour, the experienced behaviour, you start to peel all that away - and at the end of the day, we’re all humans." Click here to read the full piece. 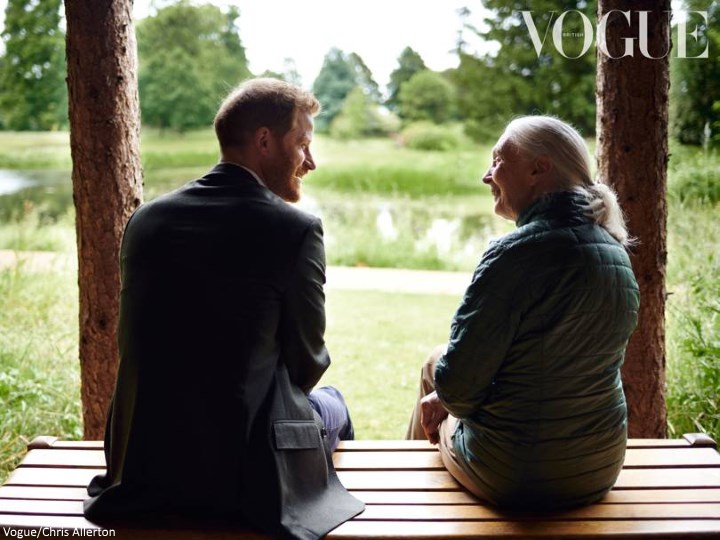 The digital issue of British Vogue can be downloaded via their app now. I've only had a chance to read a handful of articles so far, but I can tell you it's packed with substance, each page curated with care. Familiar names and faces from Outland Denim to Clare Waight-Keller pop up in paragraphs. There's an array of wonderful features, articles, stunning photography and of course plenty of fashion. The print edition will be available on Friday.
Posted by Admin at 7/30/2019