Prince Harry's travels took him to Malawi today where he visited Nalikule College, Lilongwe to meet students supported by CAMFED and alumnae involved in CAMA, a network of women who received support from the charity in their youth and want to help the next generation. Their work is familiar for Sussex followers. When Meghan began meeting charitable representatives in the UK, it was top of her list. Since then she's met with the team on a number of occasions, both privately and during engagements. With Harry and Meghan's roles with the Queen's Commonwealth Trust, which has been working with CAMA since 2017, it's very much a perfect fit. As Harry greeted staff and students he joked: "I know there’s somebody else you’d far rather hear from than me, hopefully if technology doesn’t fail us you may see somebody on the screen." Meghan was excited to join in the conversation via Skype from Johannesburg.

The Telegraph reports Meghan told the group: "I'm so happy to be with you. We’re just so proud as president, and vice-president of the Queen’s Commonwealth Trust, that we can support you in everything that you do because we cannot begin to express how valuable and vital that work is, we’re just incredibly proud to be part of it. I wish I could be with you, we’re in South Africa right now Archie’s taking a nap. I’m with you in spirit." (Look at Harry's face in the image below, he looked thrilled to see his wife).

The group called Meghan "Duchess Wathu, Duchess Wamayankho" - which means "Our Duchess, Duchess with the solutions". Meghan said: "Angie when you and I first met I was so struck by CAMA and everything you do".


Hello Malawi 🇲🇼, it’s South Africa 🇿🇦 calling! Another incredible day on #RoyalVisitAfrica as The Duke arrived in Malawi, with The Duchess joining him via Skype to speak to women and girls who went to school with the support of CAMA and @camfed. Afterwards, The Duke was able to meet President Peter Mutharika and thank him for the wonderful welcome in his country. Today, The Duchess of Sussex linked up with Nalikule College, Lilongwe, to join The Duke and an amazing group of women who attended school through the help @camfed and its 20-year-old alumni network CAMA. These CAMA women are part of a major network across Africa, which has 140,000 members and 17,500 in Malawi alone. These positive female role models, leaders and entrepreneurs, are working to lift their communities out of poverty. Money distributed by CAMA goes directly to each of their alumni, who then use their own resources to support another three children to attend school. Along with support from the @Queens_Commonwealth_Trust, CAMA and @camfed are changing the lives of many young girls though education and empowerment. As President and Vice President of the QCT, The Duke and Duchess both believe in the power of education to empower young girls, and change society as a whole. #RoyalVisitMalawi #RoyalVisitSouthAfrica Video©️SussexRoyal
A post shared by The Duke and Duchess of Sussex (@sussexroyal) on Sep 29, 2019 at 12:41pm PDT


On International Women's Day, Meghan joined a panel with executive director Angeline Murimirwa to discuss the importance of education. The Duchess said: "That is one huge thing, a lack of access to education in my mind is the single largest hindrance to this equality that we are all seeking out."


CAMFED is an international non-profit organization tackling poverty and inequality by supporting girls to go to school and succeed, and empowering young women to step up as leaders of change. Since 1993, CAMFED’s innovative education programmes in Zimbabwe, Zambia, Ghana, Tanzania and Malawi have directly helped more than 2.6 million students to attend primary and secondary school, and more than 5 million children have benefited from an improved learning environment. 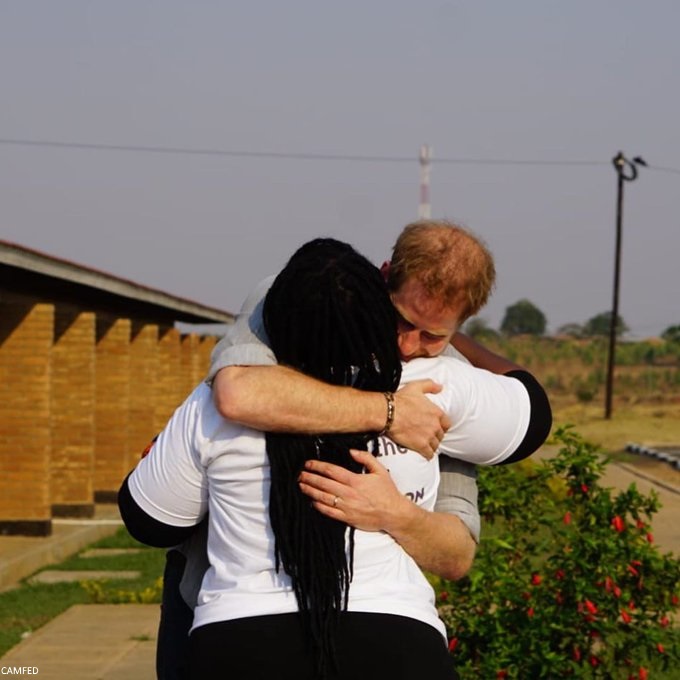 “Since you yourself were a young girl you have advocated for women as equal beings with the power to make lasting change, and I know this is something you will instil in Archie. I always think of a saying in my local language, Shona “Chinonzi rasa ndechirimumaoko kwete muropa.” It means “You can only be told to throw away what is in your hands, not what is in your blood.” The fact that you care, that you advocate, that you shine a light on this and always have done, means so much.”

In Malawi, primary school is free to attend, however fees are introduced at secondary level. CAMFED's work is vital in the country. 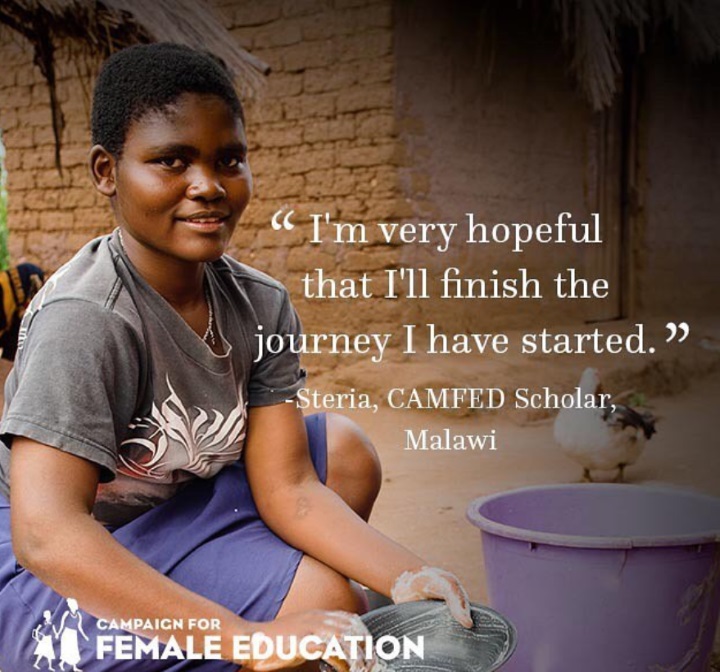 Many will remember the amazing #GlobalSussexBabyShower, a grassroots led campaign by supporters of Harry and Meghan's which set out to raise as much as possible ahead of Archie's birth. CAMFED was one of the initial choices, their work resonated deeply with many. Over £21,000 was raised. What does that mean for the organisation? It puts 118 girls through a full year of high school. 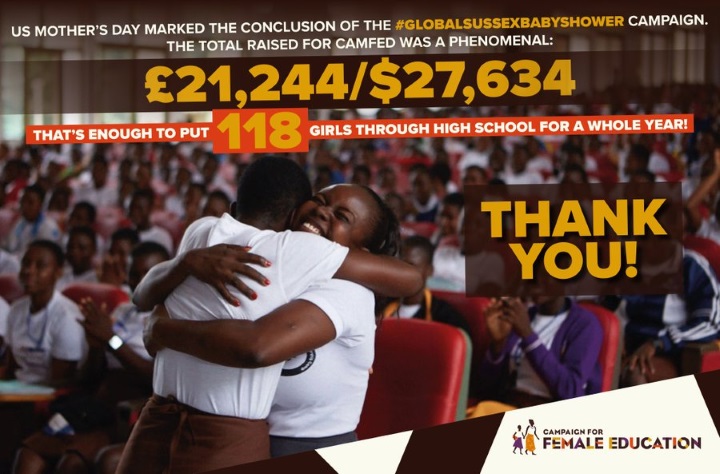 Holly Tett reports over the last few years the UK's Department for International Development has supported 35,000 girls in Malawi to finish secondary school. Before the tour, we talked about the importance of highlighting UK-Africa partnerships in action, supporting CAMFED is a very fine example.

“Every girl here is here because of partners like the UK who believe in the power of girls’ education” said @camfed rep meeting HRH in #Malawi Over the past few years @DFID_UK has supported 35,000 girls in Malawi to complete secondary school. #leavenogirlbehind @queenscomtrust pic.twitter.com/7bpDs1eKPH
— Holly Tett (@HollyTett) September 29, 2019


Prince Harry told the group: "Your singing is extraordinary. If you could just be with me everywhere I go that would be great. It's wonderful to hear how the leadership of CAMA is making a significant difference". 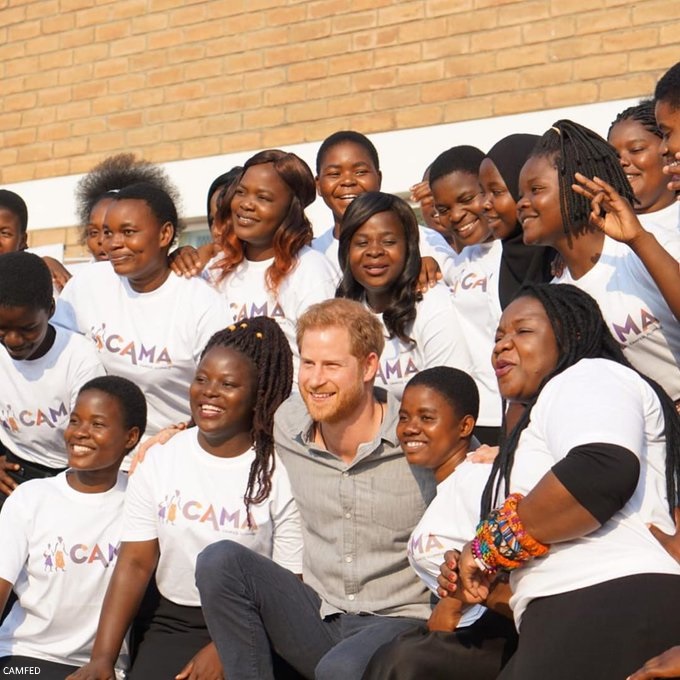 Harry was presented with a book filled with hand-written stories from women supported by CAMFED and CAMA. Former student Rose told him "It's based on our own stories. Please send this with all our love to your wife. Hopefully Archie will enjoy it too" If you would like to support the Campaign For Female Education please click here to find out more about donating and other ways to help. 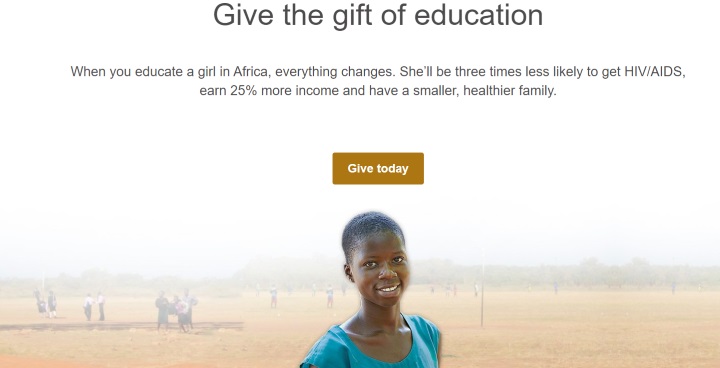 It appears Meghan wore the green Lisa Marie Fernandez Rosetta dress she debuted for the polo in July. 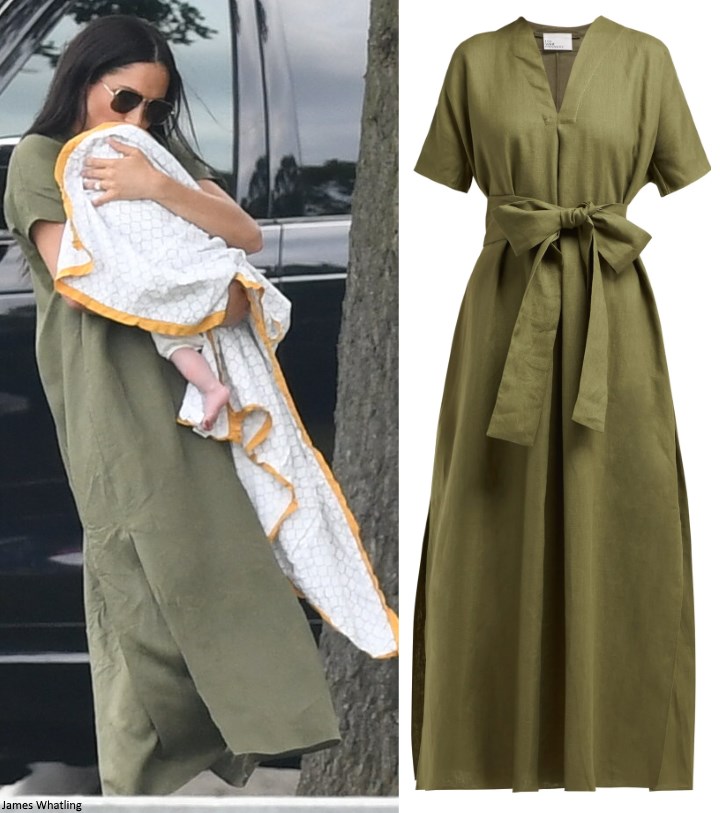 If you're just joining us, click here to read the post on Meghan's breakfast meeting with nine South African leaders in Cape Town. The Duchess enjoyed meaningful conversations with inspiring women from a number of fields. She wore a Misha Nonoo top and J Crew skirt for the engagement. 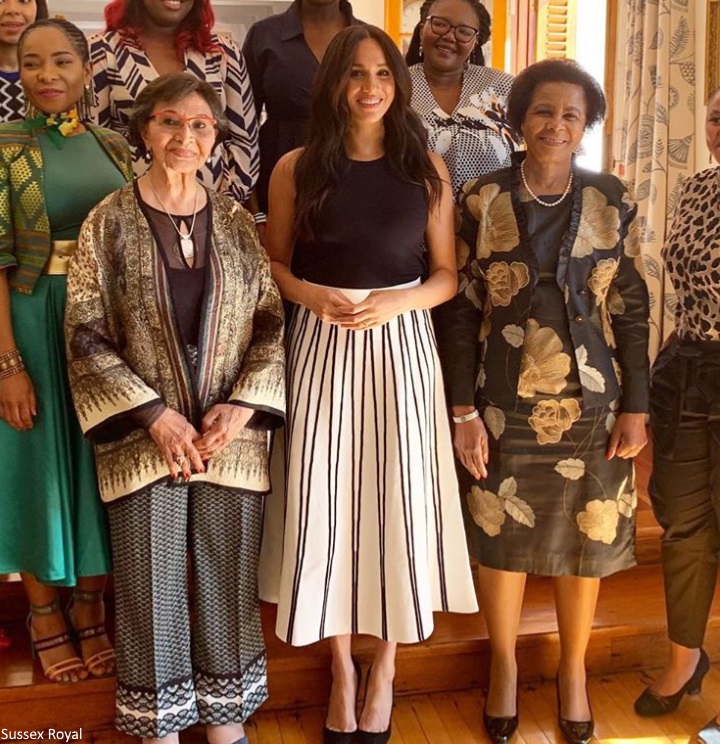 On Tuesday, the Duchess will have two solo engagements in Johannesburg. She will attend a round-table discussion with the Association of Commonwealth Universities. The Duchess will then visit a school to learn about the work of a local charity which receives UK aid funding to raise awareness and tackle sexual violence in schools. It's possible we'll hear more on Meghan's other private engagements before then.
Posted by Admin at 9/29/2019