The Duke and Duchess of Sussex stepped out in London this evening for the annual Mountbatten Festival of Music at the Royal Albert Hall. 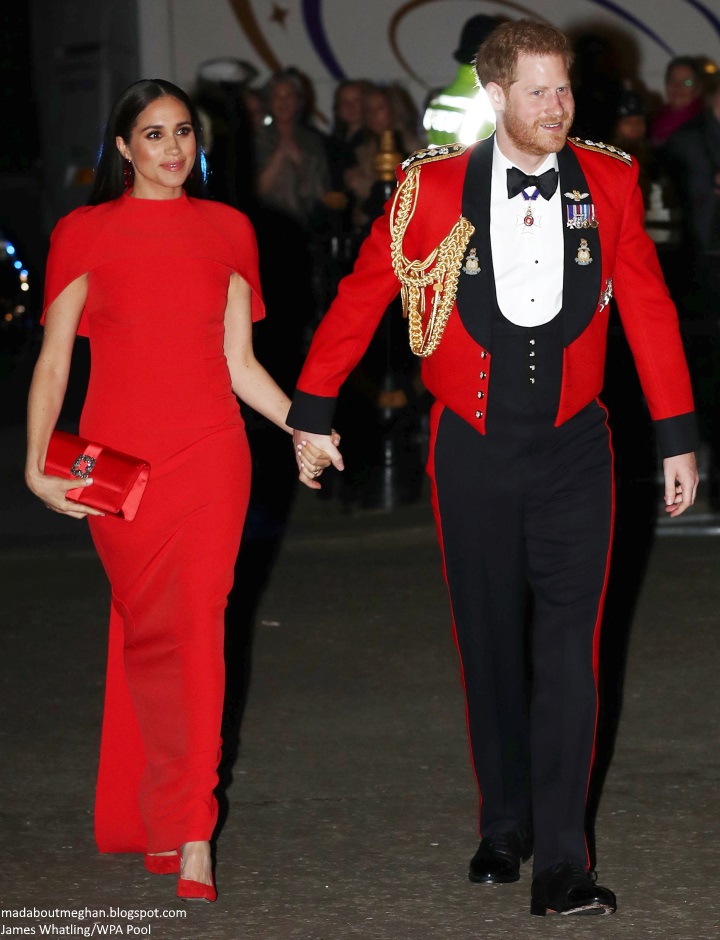 To say these two made a stylish arrival would be quite the understatement. 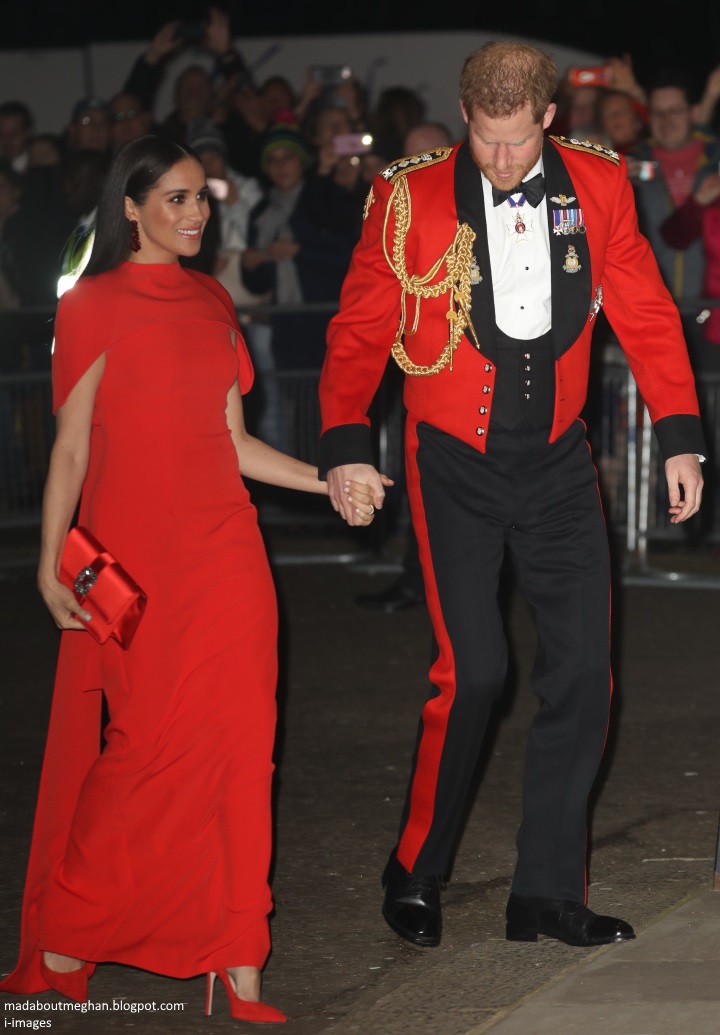 The couple were attending due to Harry's role as Captain General, Royal Marines. Prince Philip passed the role to his grandson in 2017. Philip's association with the Royal Marines dated back to 1953 when he was appointed in succession to the late King George VI. 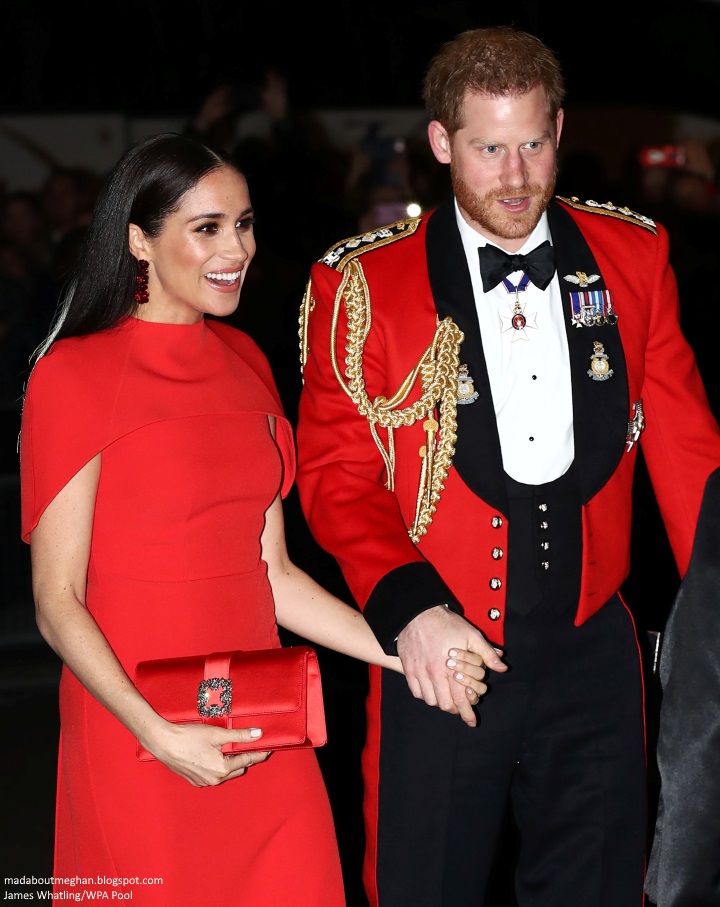 Given Harry's service in the army this appointment meant a great deal to him and following news the Sussexes will step down as senior royals, we've heard a variety of stories about Harry's future with the Royal Marines. Last month the following update was shared on the Sussex Royal website: "The Duke of Sussex will retain the rank of Major, and honorary ranks of Lieutenant Commander, and Squadron Leader. During this 12-month period of review, The Duke’s official military appointments will not be used as they are in the gift of the Sovereign. No new appointments will be made to fill these roles before the 12-month review of the new arrangements is completed." We know how passionate Harry is about his work with the military and veterans, an area of focus which will continue to be at the heart of his work through the Invictus Games and exciting new plans for the Endeavour Fund which we'll hear about in due course. 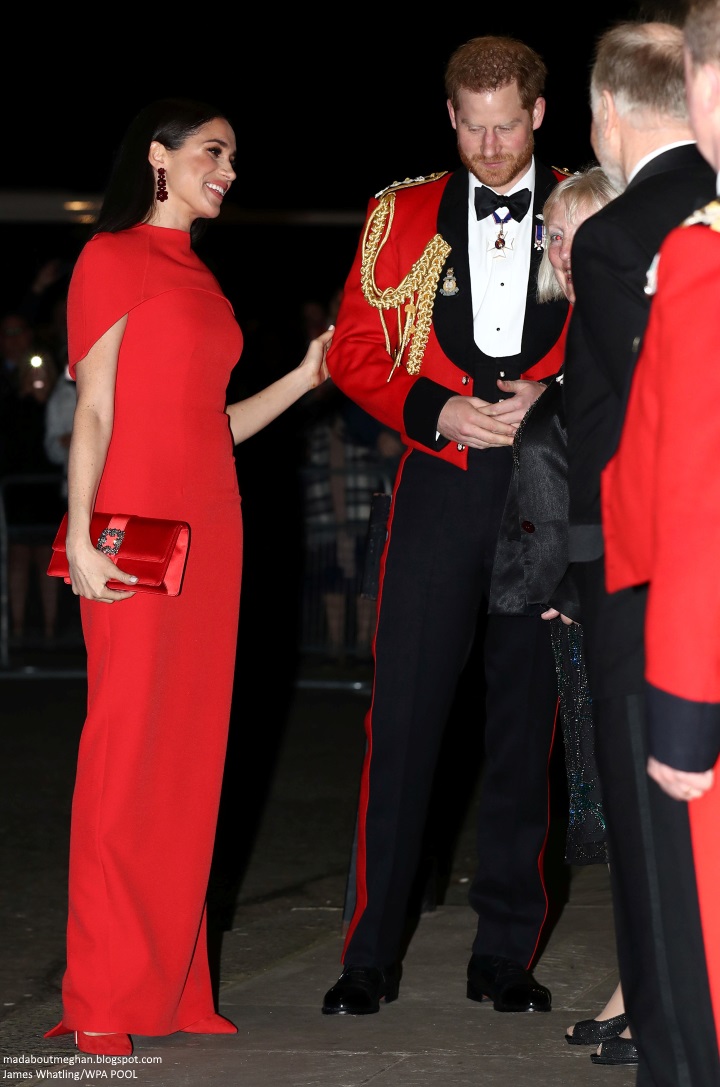 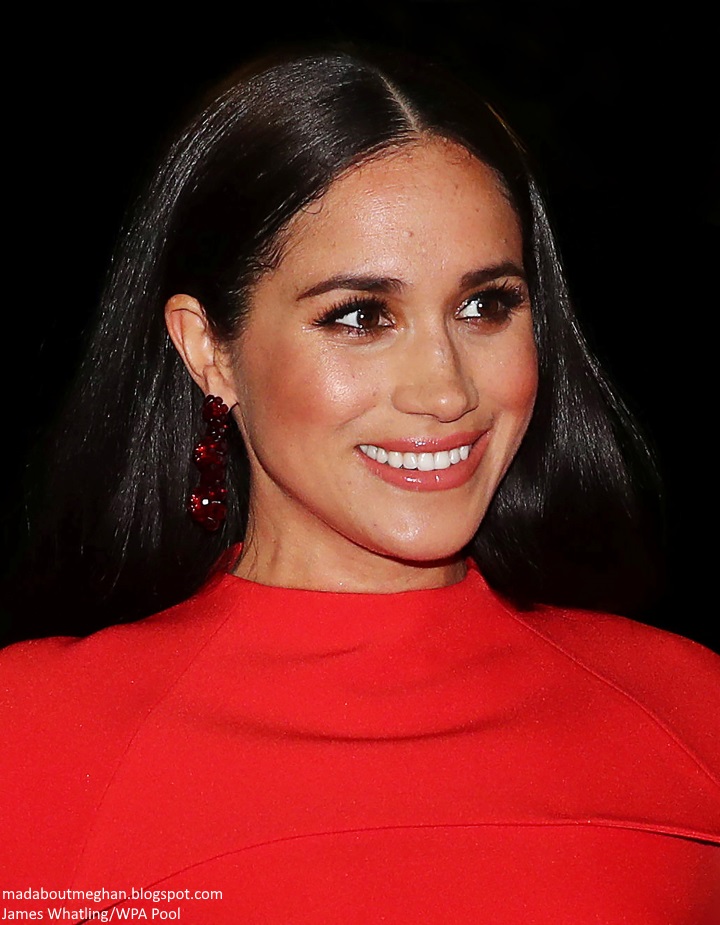 The couple shared this lovely image as they made their way to the Royal Box. 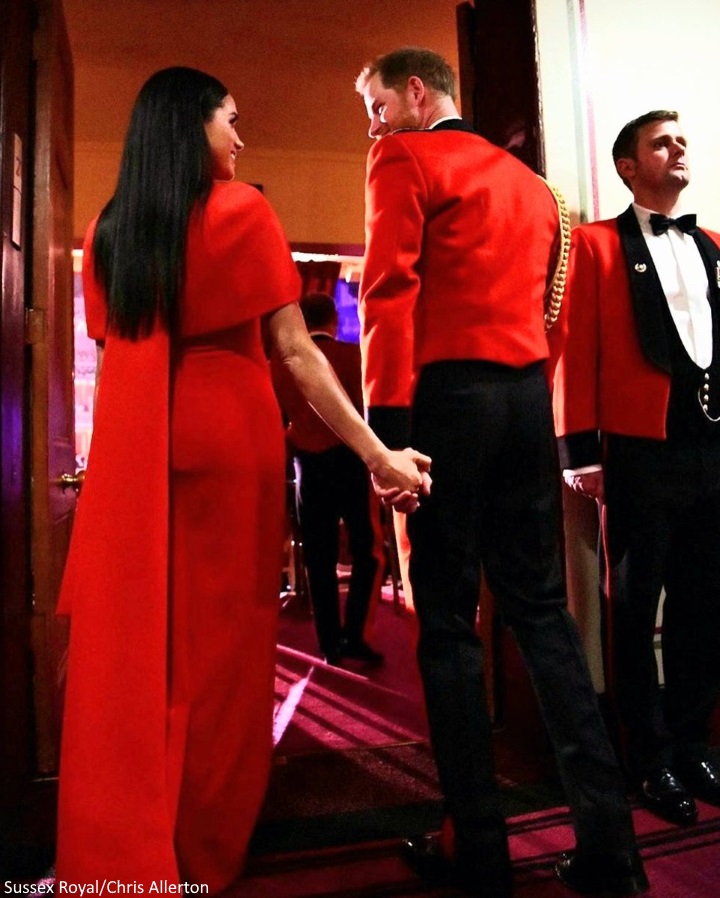 Their favourite photographer Chris Allerton outdid himself tonight by producing the photo above and this delightful image. 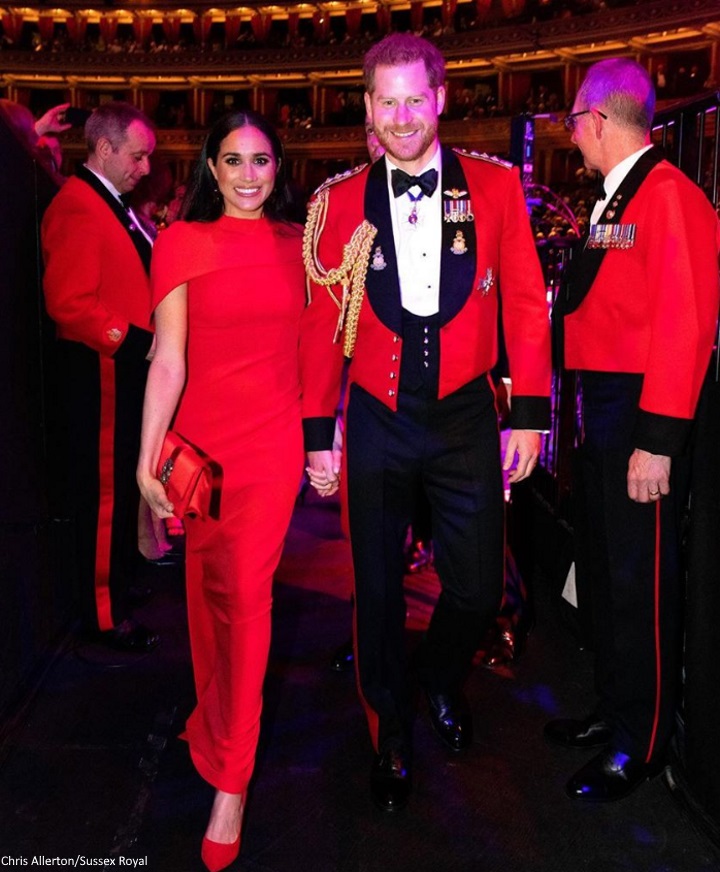 
Duchess Meghan and Captain General of the @RoyalMarines, Prince Harry, arrive at @RoyalAlbertHall for tonight’s Mountbatten Festival of Music. The evening, which features the precision and musicality of the @RMBandService, raises funds for @theRMcharity. pic.twitter.com/pa2MIbPh7d
— Omid Scobie (@scobie) March 7, 2020


As they walked in, they received a standing ovation and applause.

The event is especially poignant as it may be the last time we see Harry in his Royal Marines uniform. They were both visibly touched by the support tonight.

Singing 'God Save the Queen'.

A very nice video which captures the audience reaction.


The festival brings together world-class musicians, composers and conductors of the Massed Bands of Her Majesty’s Royal Marines. 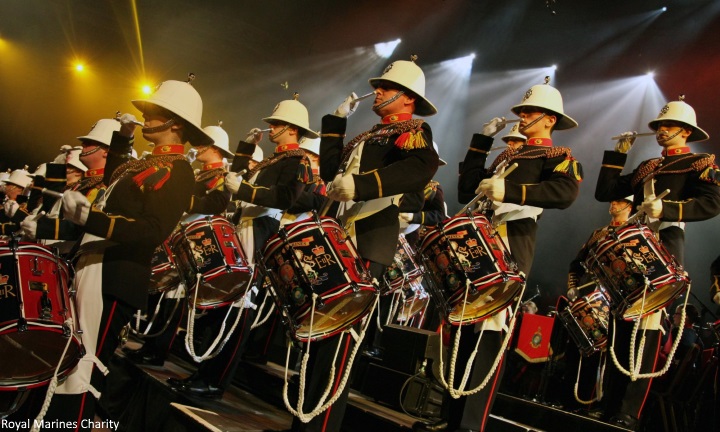 And sees the Royal Marines Bands showcase their incredible musicianship and pageantry. The performance features a wide range of musical styles, including music from the big screen and superb solo items, as well as traditional marches and overtures. 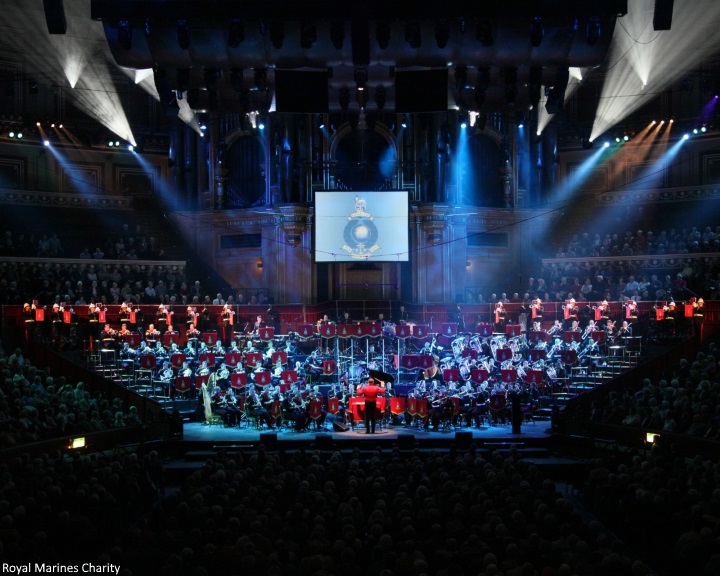 Musicians and are given the “West End” treatment with spectacular lighting effects. Proceeds from the event go to the Royal Marines Charity who strive to support retired Royal Marines, their families and all those who have links to the Corps. They are very much there for those wounded or injured to offer advice and practical help every step of the way. The other charity benefiting from tonight's event is Clic Sargent who work tirelessly to stop cancer destroying young lives. It is the UK's leading cancer charity for children and young people. Their care teams offer specialist care across the United Kingdom. 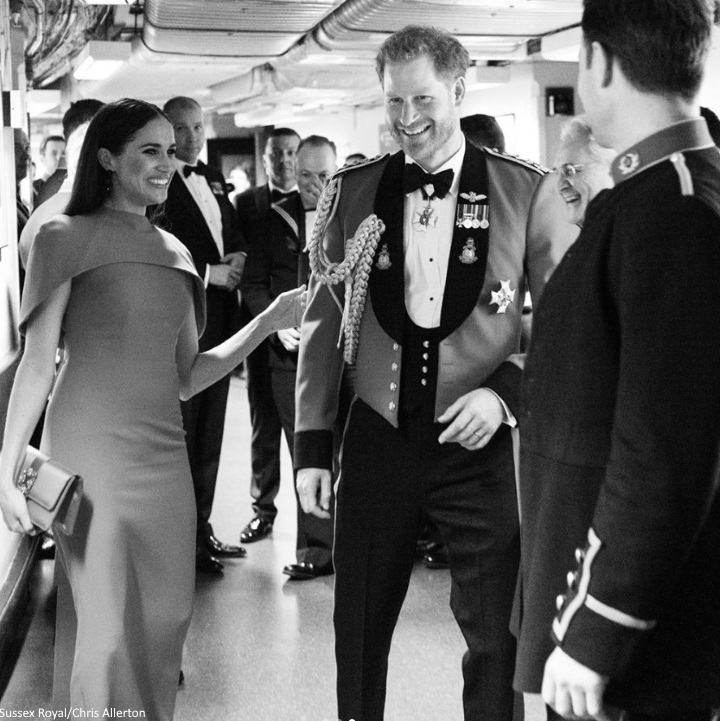 Meghan told performers during the interval she thought the festival of music was "wonderful".

From the fitted Victoria Beckham dress at the Endeavour Fund awards to the chic Topshop and Roland Mouret outfit she wore at the National Theatre, Meghan's been debuting gorgeous looks throughout the week. She saved the very best for tonight though, wowing in a stunning red Safiyaa gown - perfectly matching her prince's Royal Marines uniform. This was an outstanding look for the Duchess, the cape-effect silhouette, the vivid shade of red and statement accessories made this one of Meghan's best looks to date. 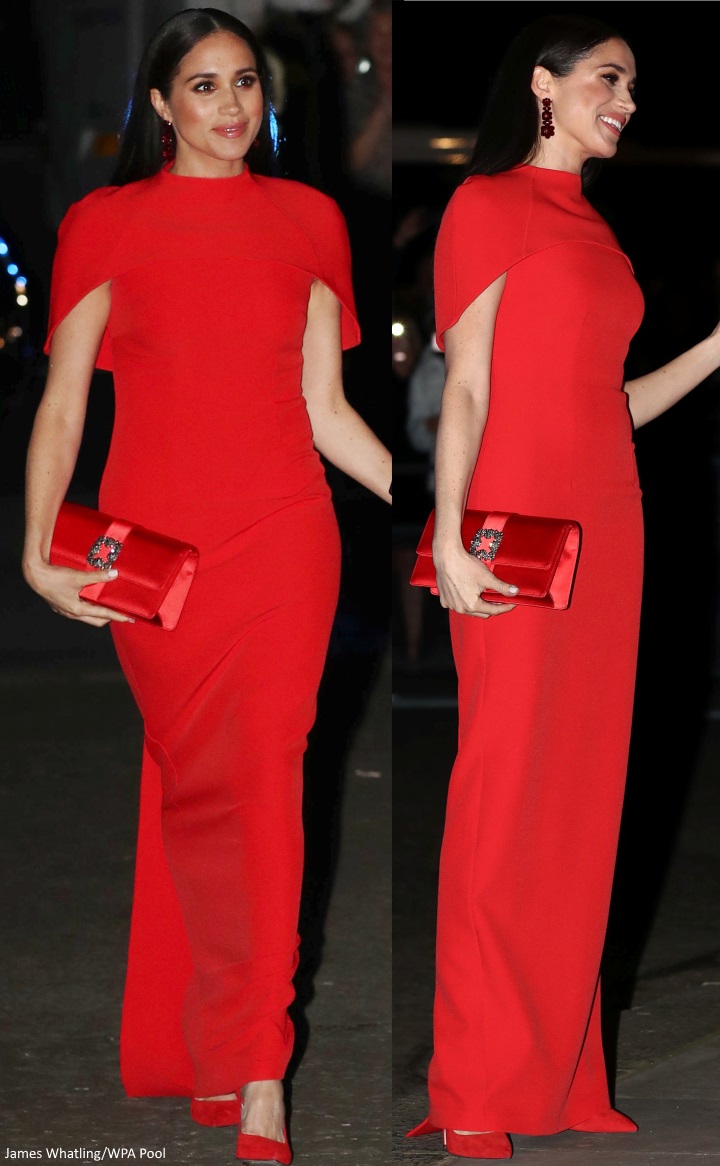 The £1,295 Kalika gown is described as: "Made from striking red crepe, Safiyaa's 'Kalika' gown is perfect for special occasions. The silhouette flows down the back, while a subtle cutout detail tempers the volume and movement of the sleeves." 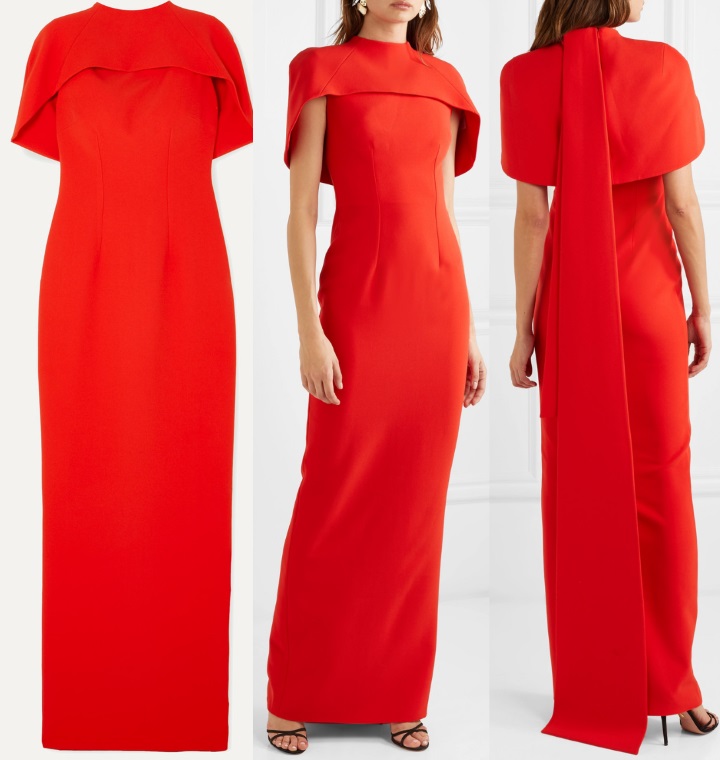 The Duchess wore a similar style gown by the brand for a State dinner in Fiji during the 2018 Oceania tour. 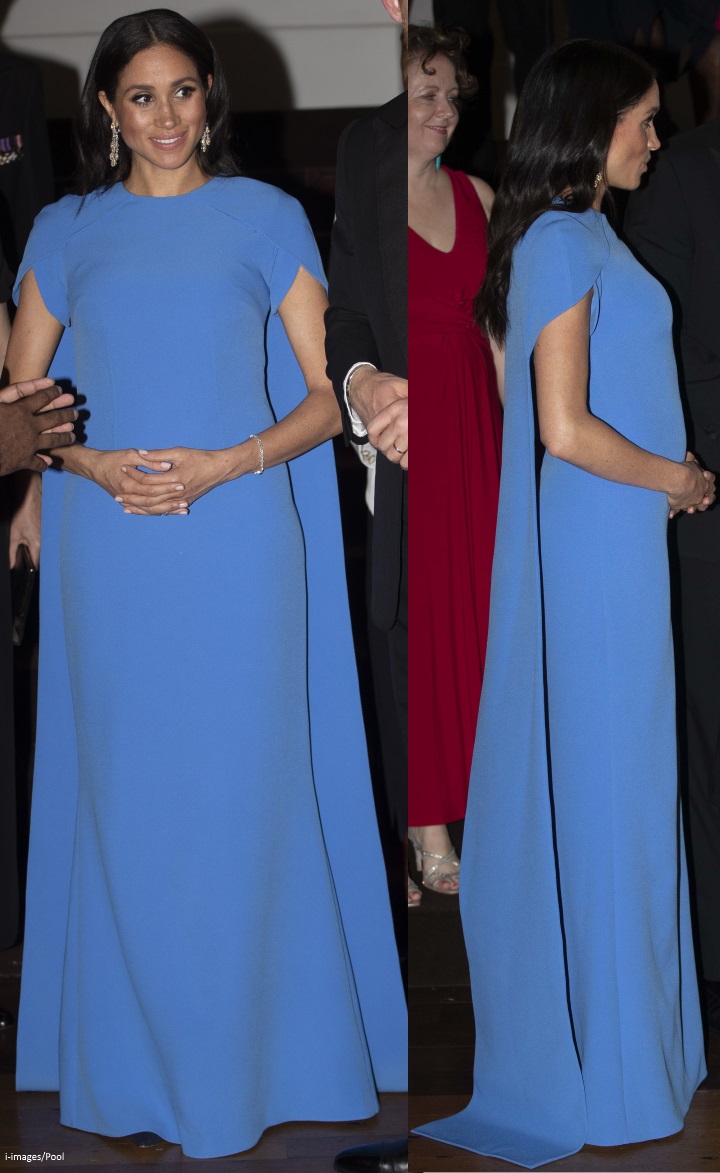 London-based brand Safiyaa was launched by creative director Daniela Karnuts in 2011. With a demanding career in fashion media, she needed a wardrobe that was sophisticated and polished, without being boring or dated. Searching for pieces that were flattering, combinable and travelled well led her to question why a man could go to London’s Savile Row for bespoke suiting yet a woman had to settle on fixed styles and colours. With a selection of twelve dresses and endless ambition, Daniela began her journey to fulfill her needs and those of women with similar desires as well. Named after her daughter, Safiyaa was started from there. The brand is described as "created for women by women". 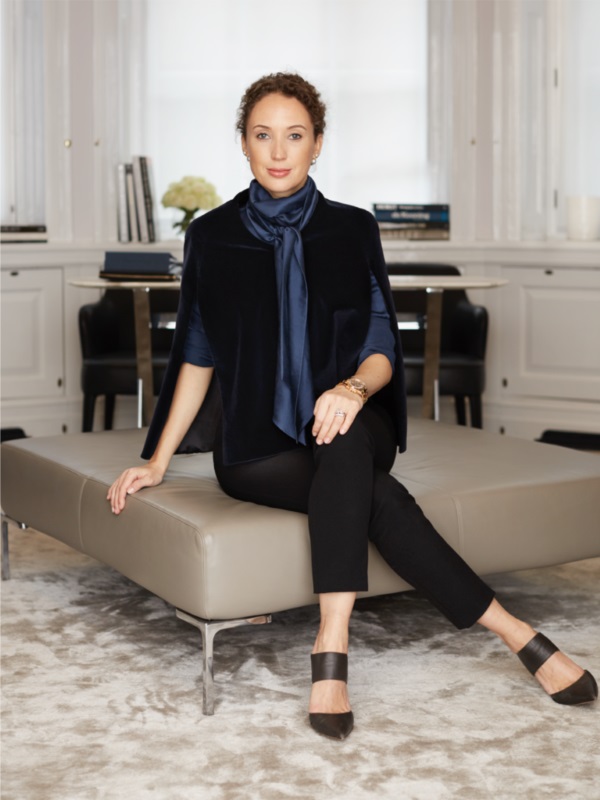 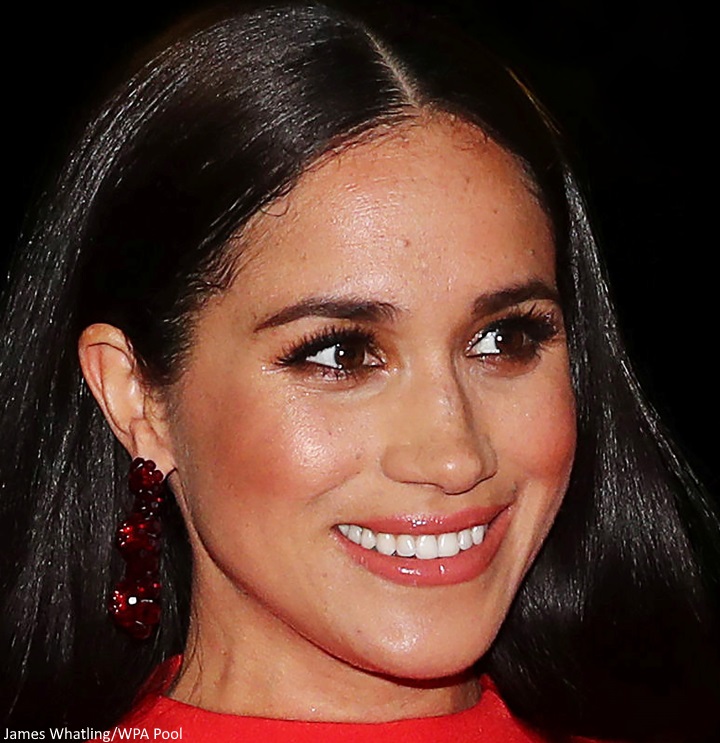 They feature butterfly fastening and a crystal flowers design. From the Autumn/Winter 2019 collection, they’re crafted from bevelled spherical glass beads structured to a tiered formation dropping from a gold-tone metal post to three floral arrangements. They are available in several colours including red, blue, pink, black and white for £250. 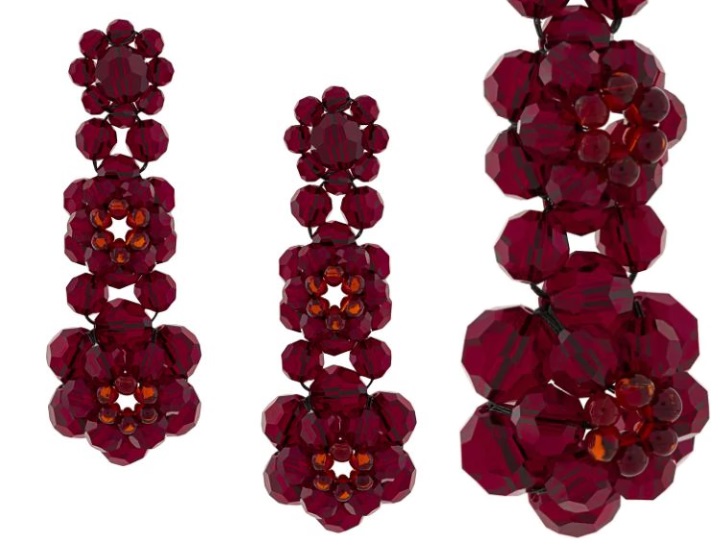 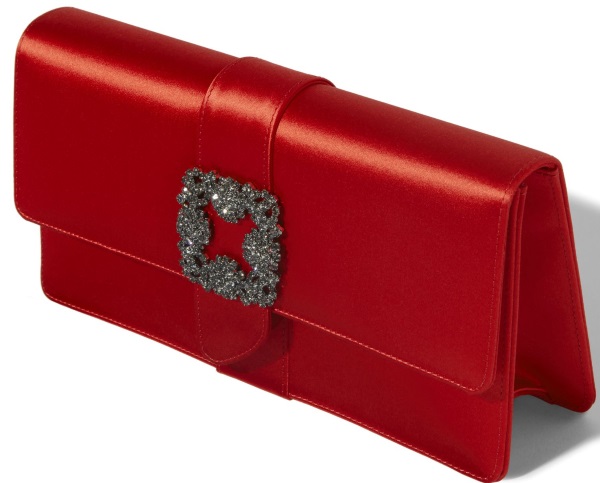 And completed the look with her Stuart Weitzman red suede pumps. 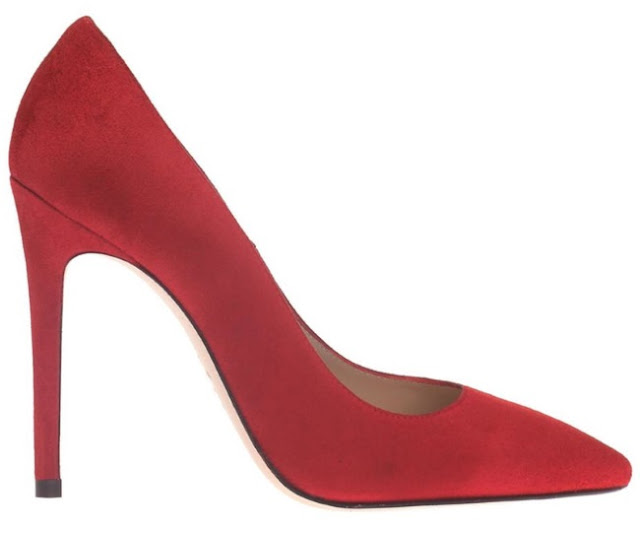 We should hear more about Meghan's visit to the Robert Clack School in Dagenham later tonight.
Posted by Admin at 3/07/2020