Fresh from last night's dazzling State Dinner, the Duke and Duchess of Sussex carried out several engagements in Suva. 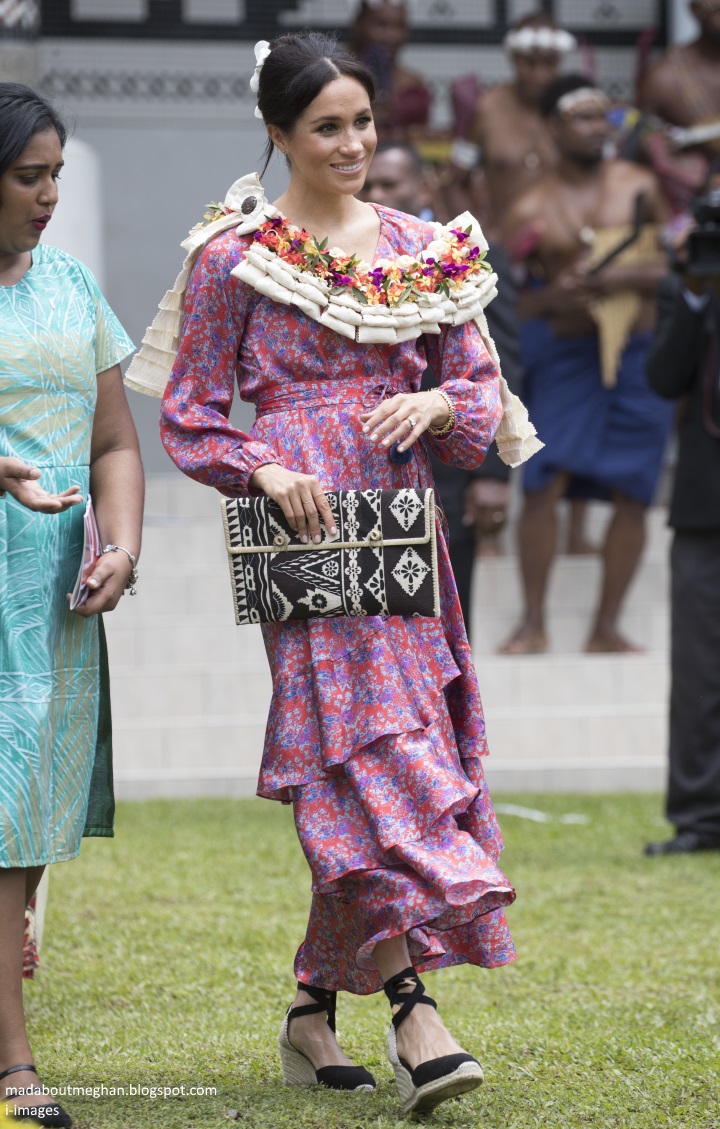 This morning, Prince Harry Harry paid his respects at the National War Memorial, which commemorates both Fijian and British troops. Links between the British Military and Fiji continue to this day, with 1350 active Fijian servicemen and women. Harry met veterans from the Republic of Fiji Military Forces and the Royal British Legion Fiji. 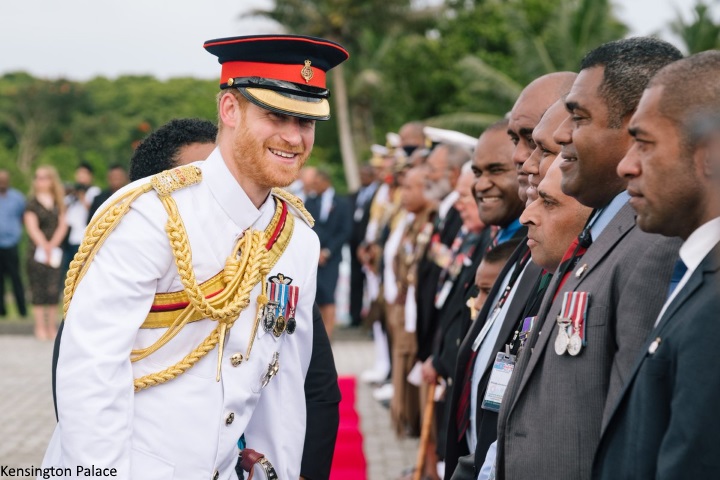 From there, the Duke and Duchess travelled to the University of the South Pacific campus in Suva. 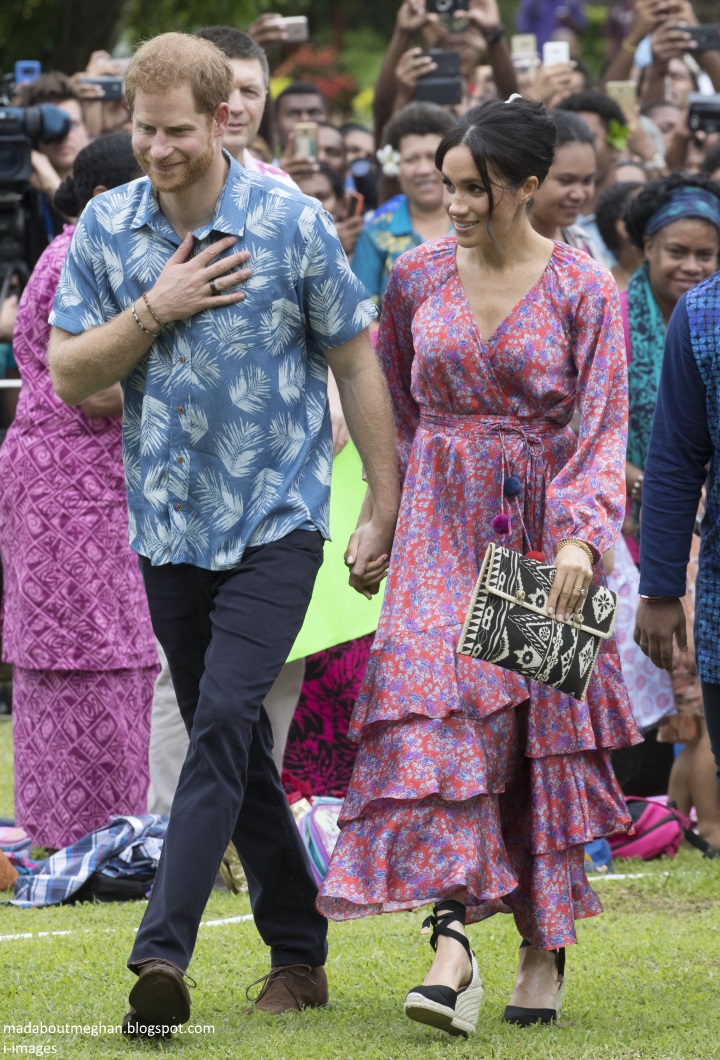 They observed a cultural performance on the effects of climate change, before meeting students studying subjects from agriculture to women’s development. The event was streamed to a number of the university's campuses throughout the Pacific region. 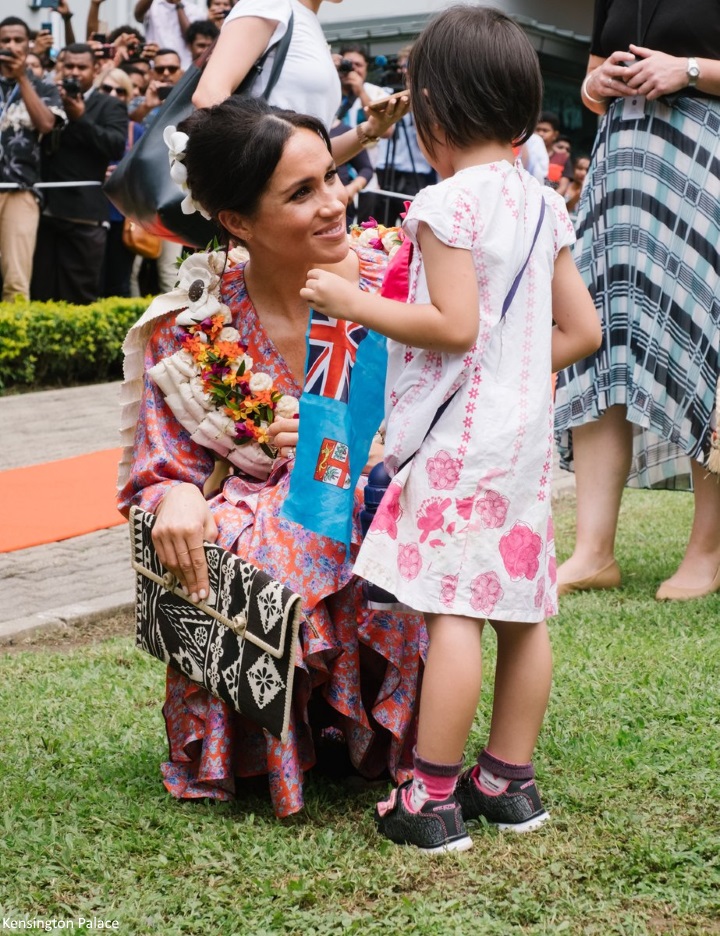 With thanks to Christin for posting this screenshot. 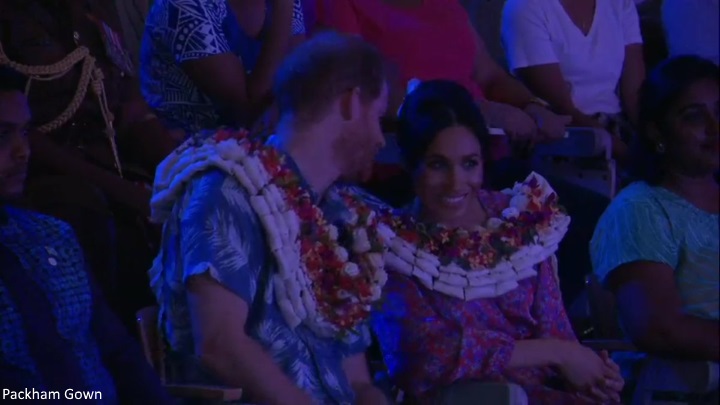 The Duke and Duchess caught up with Elisha Azeemah Bano, one of The Queens Young Leaders, who founded the Act It Network. 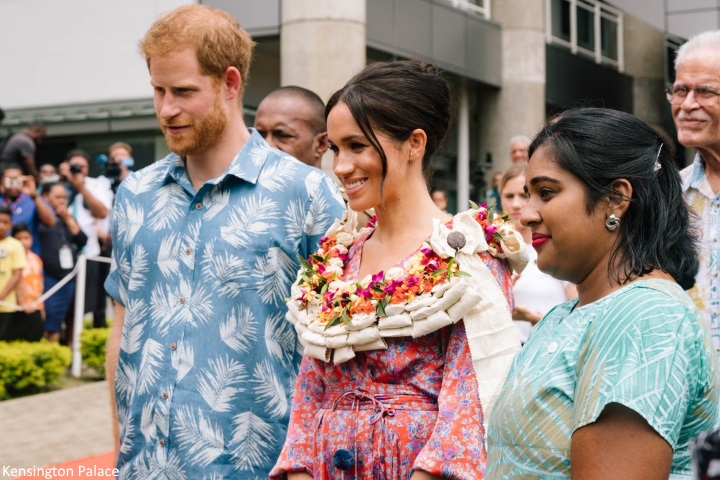 The Duke and Duchess joined the Queen earlier this year for the Queen's Young Leaders Awards. 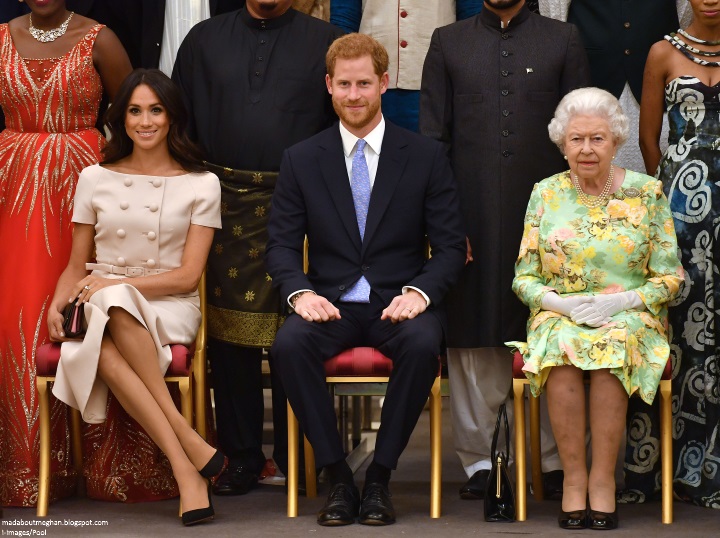 The University welcomed Her Majesty in March 1970, when she visited Laucala Campus to present the Royal Charter. 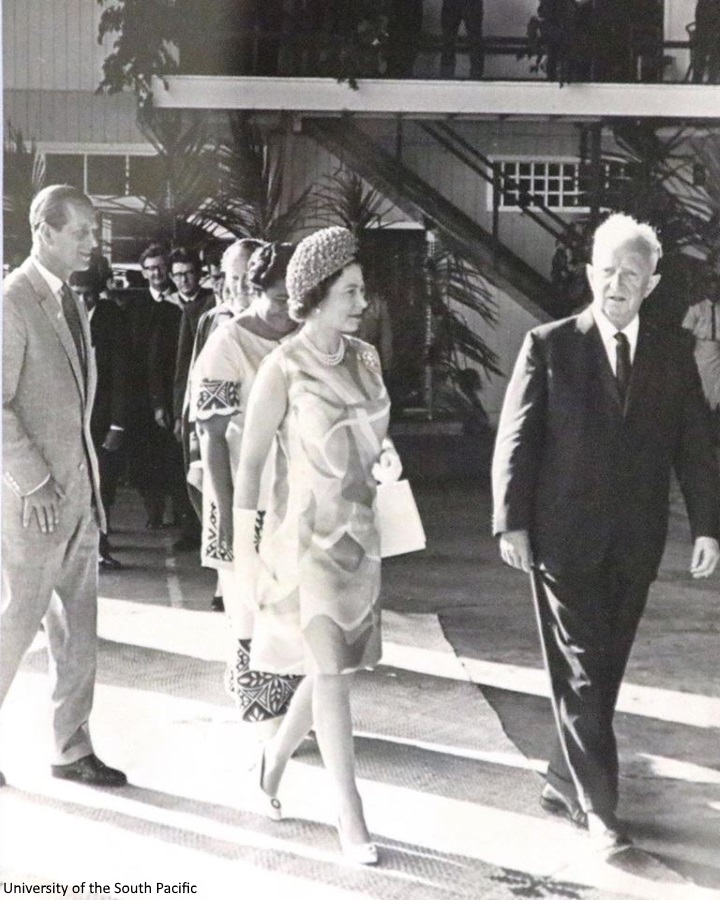 Kensington Palace said the Duchess planned to say a few words. We did not expect a beautifully delivered speech. Meghan took to the stage to announce two new grants awarded to the University, allowing them run workshops to empower female staff and to support students during their education. They will be provided by Her Majesty's patronage, the Association of Commonwealth Countries. In a personal speech Meghan drew on her own experiences acknowledging the joys and challenges of her own journey at Northwestern in Chicago where she graduated in 2003 with a double major in theater and international studies."I am fully aware of the challenges of being able to afford this level of schooling for many people around the world - myself included. It was through scholarships, financial aid programmes and work-study where my earnings from a job on campus went directly towards my tuition - that I was able to attend university,' she said. And, without question, it was worth every effort. Everyone should be afforded the opportunity to receive the education they want, but more importantly the education they have the right to receive. And for women and girls in developing countries, this is vital."

'Bula! It is a great privilege to be with all of you today. As a university graduate, I know the personal feeling of pride and excitement that comes with attending university. From the moment you receive your acceptance letter, to the exams you spend countless late nights studying for, the lifelong friendships you make with your fellow alumni, and the moment you receive your diploma.

The journey of higher education is an incredible, impactful and pivotal one. I am also fully aware of the challenges of being able to afford this level of schooling for many people around the world – myself included. It was through scholarships, financial aid programmes and work-study where my earnings from a job on campus went directly towards my tuition - that I was able to attend university.

And, without question, it was worth every effort. Everyone should be afforded the opportunity to receive the education they want, but more importantly the education they have the right to receive. And for women and girls in developing countries, this is vital. Providing them with access to education is the key to economic and social development. Because when girls are given the right tools to succeed, they can create incredible futures, not only for themselves but also for those around them.
While progress has been made in many areas across the Commonwealth, there is always scope to offer more opportunities to the next generation of young adults, and specifically to young women. The Association of Commonwealth Universities, which has Her Majesty The Queen is Patron of, supports universities to promote equality in their own institutions. I am pleased to announce today that two new grants will be awarded to Fiji National University and the University of the South Pacific, allowing each of them to run workshops which empower their female staff.

This means that female faculty members are able to encourage others to follow in their footsteps and enter higher-education, and that more womenbecome part of the decision-making process in academic institutions. Grants like this ensure that women are provided with the training and skills to operate effectively in their roles, and those with leadership potential are given the opportunity to be heard and recognised at the most senior level.

It is wonderful to join you here today and we look forward to learning more about your academic endeavours, and the work you plan to do as future leaders and as change-makers! My husband Harry and I, wish you all the very best of luck as you continue your studies and work. Your efforts now will help to make a positive future for each of you and your communities at large - congratulations to you all!'


A lighthearted moment from Harry afterwards when the MC forgot to introduce him. "No way I could follow my wife after that".


The couple received gifts before leaving. 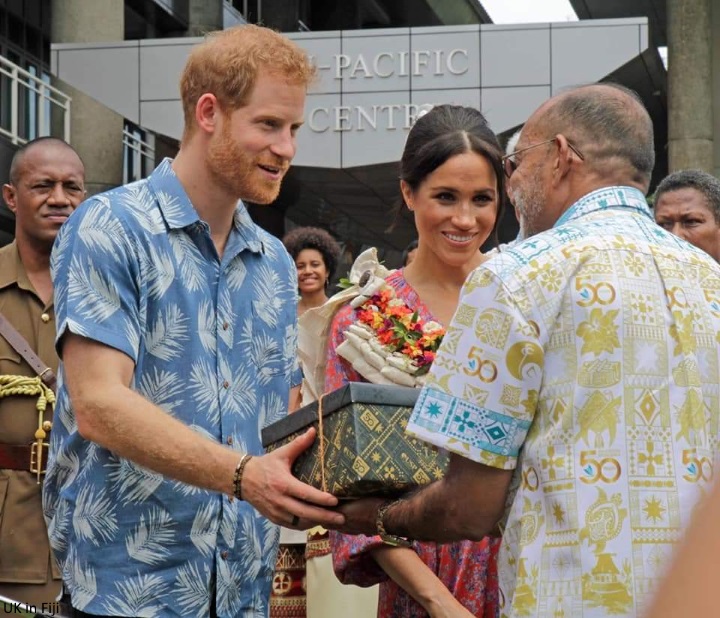 From the university, Harry and Meghan separated to do solo engagements. Meghan attended a morning tea at the British High Commissioner’s Residence to showcase women's organisations which operate throughout Fiji. 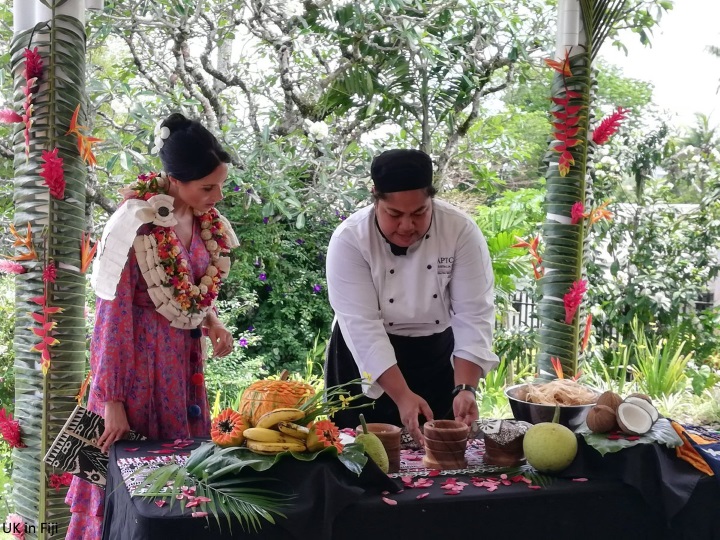 In particular, Meghan heard more about a UN Women's project, 'Markets for Change', which promotes women's empowerment in marketplaces throughout the Pacific. 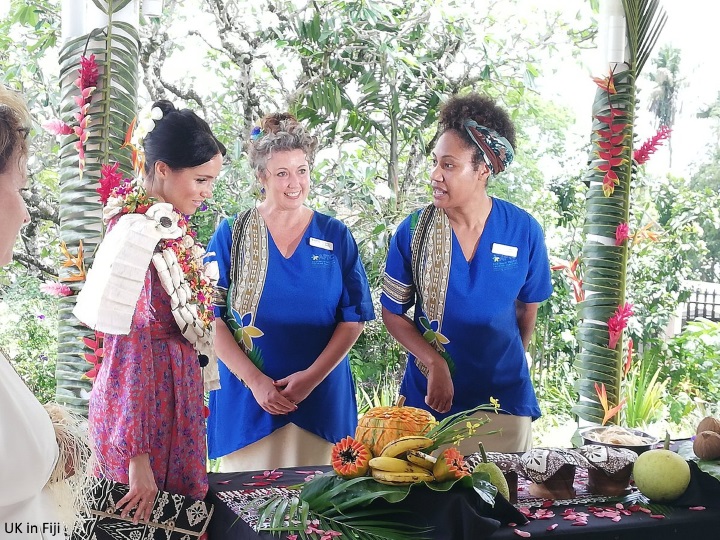 'She was attending a morning tea at the residence of the British High Commissioner where she met a room full of women who have broken out of their traditional roles. They included a female pilot for Fijian Airways and a number of women serving in the police and military.

At a culinary demonstration she watched as cookery trainer Alisi Delai showed her how to make lote, which involved scraping the coconut flesh and using a hot stone to extract the juice. “That brings out the smoky flavour,” Ms Delai told her. Ms Delai said afterwards: “I was showing her how to make lote. This is something we Fijians have for breakfast instead of porridge, or as a dessert. It is made from smoked breadfruit - the breadfruit that we used was picked from the High Commissioner’s garden yesterday afternoon.

“We have some banana and papaya, and then it is finished with infused coconut, which has had the hot stone added to the grated coconut to release the flavour. She wanted to mix all the ingredients together, to participate in making the lote. She also enjoyed me demonstrating how we sit with the coconut scraper. She found it very interesting, how we use our traditional methods of cooking, and how in Fiji we are very alive with our culture in terms of local cuisine. We like to show the local cuisine by using the local produce.”

The duchess also met a woman whose village was destroyed by Cyclone Winston in 2016, and has since earned a living by making baskets and beach bags which are sold through a not-for-profit organisation, Rise From The Reef. Temalesi Vere, 44, who is married with five children, said three people were killed and 98% of the homes were destroyed when the cyclone hit her stretch of the coast in Ra province. “I told her that the handicraft helped our family, and helped us to earn money,” said Ms Vere, who is a local coordinator for the organisation. “She really appreciated what we are doing here.”


Meghan speaking with a lady about working with Rise from the Rife. 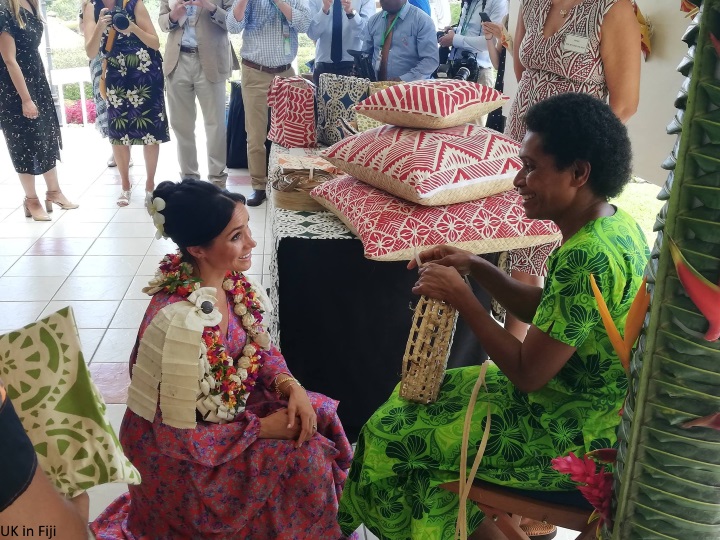 From there, Meghan visited Suva Market to meet some of the female vendors who have become empowered through the project. 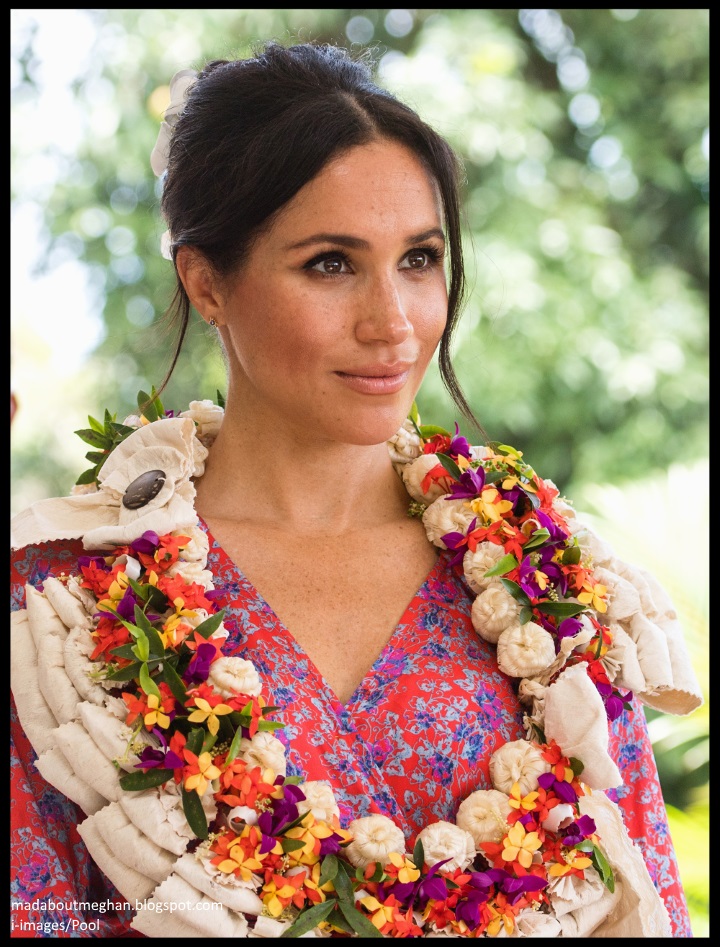 Unfortunately the visit had to be cut short due to crowd management and security issues. A Palace aide told The Telegraph: "Kensington Palace indicated the decision to leave early was down to security concerns. She was scheduled to spend 15 minutes at the market, but had to leave after around eight minutes. A palace aide said: "It was hot, humid and uncomfortably busy and there were far larger crowds than expected. She met everyone she was meant to meet and left. "There would have been a lot of people who would have been keen to meet her but she did meet those who had hoped to. On advice she was taken out due to crowd management issue." The lady in front of Meghan is the head of the Sussex security team. 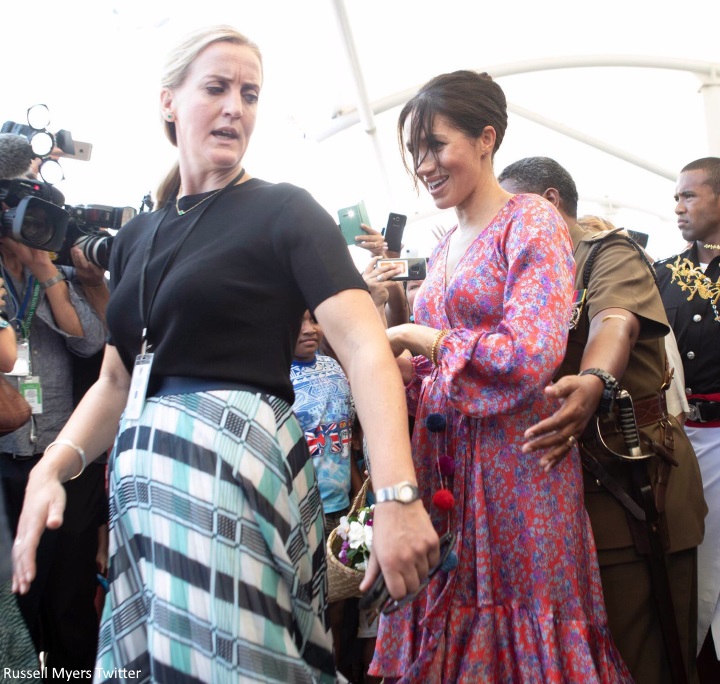 Meanwhile, Harry travelled to Colo-i-Suva Forest. Colo-i-Suva is an indigenous forest site housing many flora and fauna native to Fiji, and species including the Fiji Tree Frog. It is also Fiji's dedication to The Queen's Commonwealth Canopy. 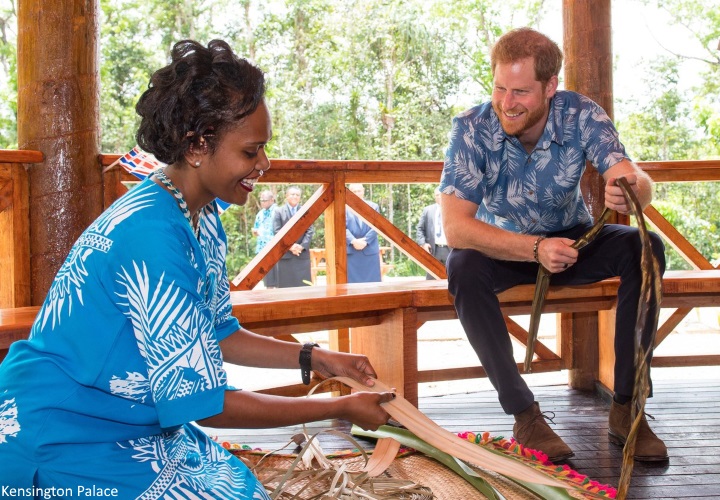 The Duchess chose the colourful Figue Frederica floral-print silk crepe de chine maxi dress. I suspected we would see more colour and this choice was perfect for Fiji and their programme for the day. Created by seasoned designer Stephanie von Watzdorf, Figue captures a relaxed bohemian spirit that’s inspired by her passion for travel. The brand celebrates craftsmanship by working with communities of artisans around the world to make its impeccably detailed pieces. 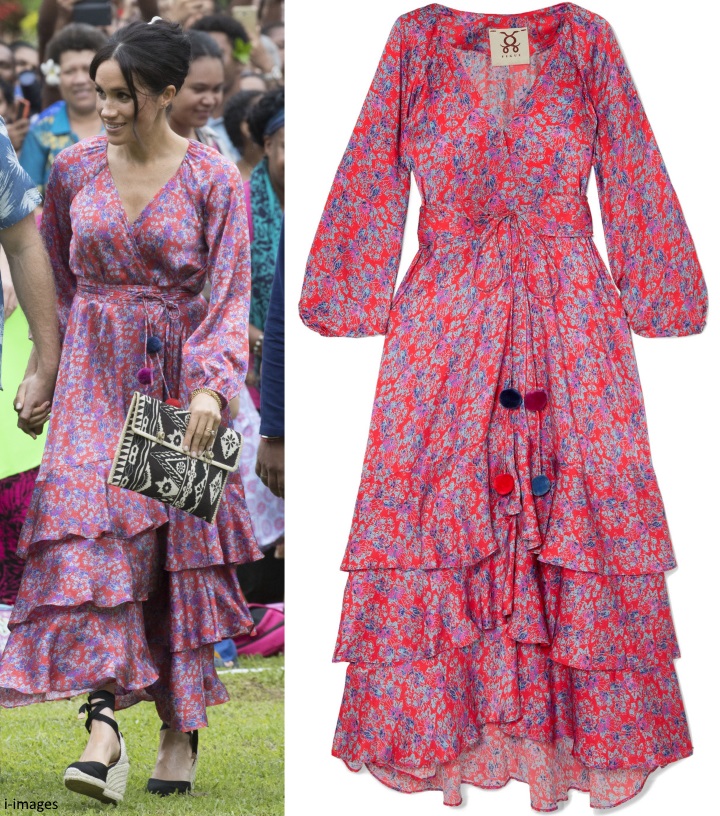 The £1,250 dress is one of the brand's best-selling styles and is part of the Frida Kahlo-inspired collection. Made from floral-print silk crepe de chine, it has pretty blouson sleeves and a playful pompom-embellished obi-belt to temper the fluid cut. The skirt is tiered with soft ruffles. It's available at Net-A-Porter, Moda Operandi, Neiman Marcus and Bergdorf Goodman. 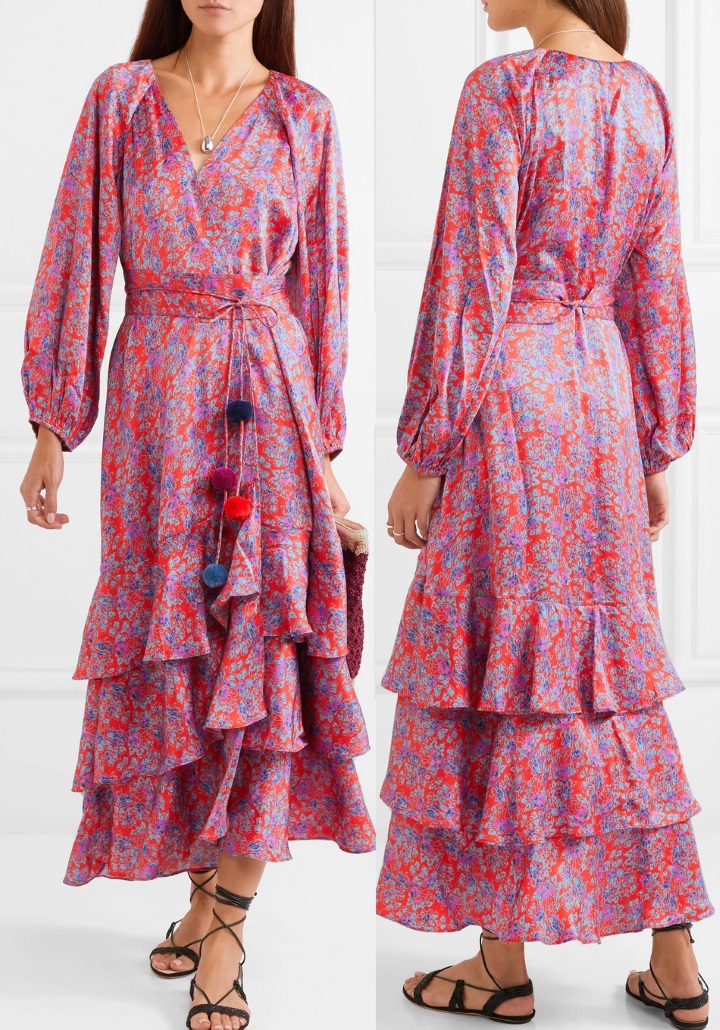 The Duchess wore her £80 Castaner Carina canvas wedge espadrilles. The pair is made from durable black canvas and set on a jute wedge heel with ties at the ankle. They are available at Net-A-Porter. 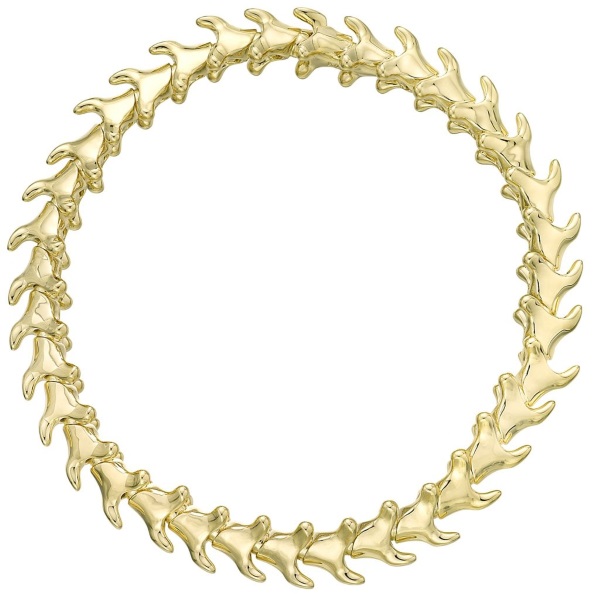 And her Temptation Pearl Stud earrings by New Zealand based designer Karen Walker. They are described as: "A miniature dyed freshwater pearl sits in the centre of flat barb."

Meghan carried a clutch made by a group of women in Fiji. The handwoven piece is actually a document bag. 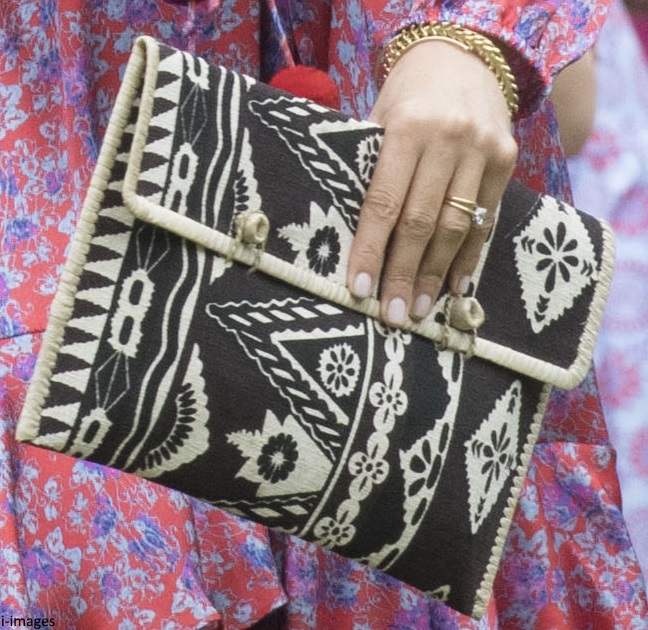 A look at Meghan's floral updo. 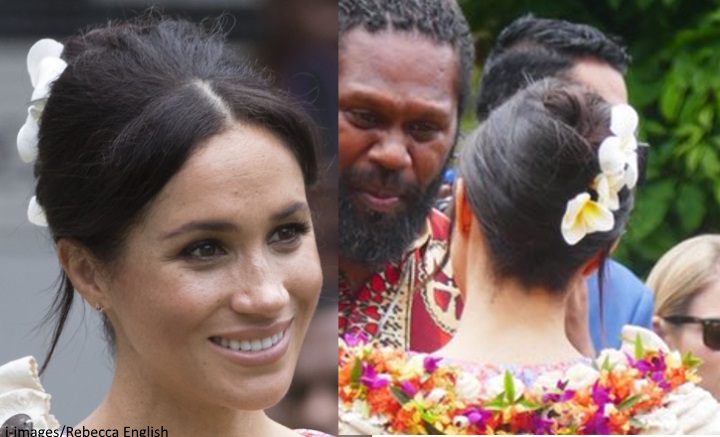