UPDATED: The Duchess in Givenchy for ACU Events As Crowds Chant 'Meghan Meghan'

In her role as patron of the Association of Commonwealth Universities, the Duchess of Sussex visited City, University of London, to meet students and academics from across the ACU’s network of 500 university members. 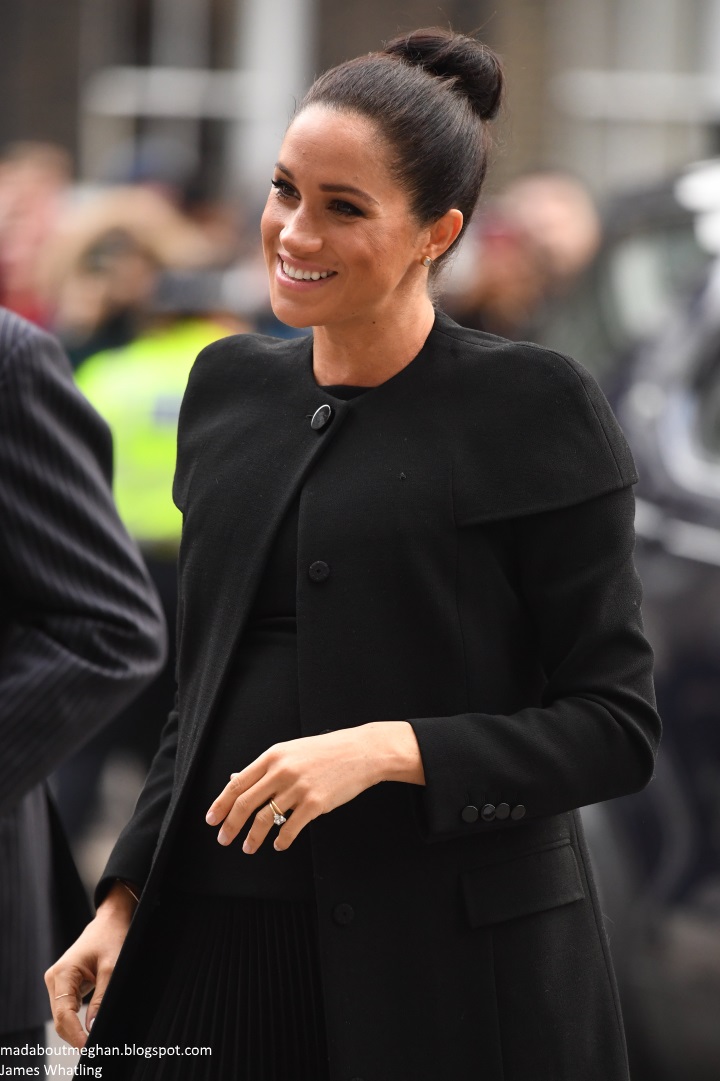 Earlier this month, Her Majesty passed the patronage of the ACU to the Duchess. Given Meghan's interest in working across the Commonwealth and her belief in the importance of education it was an ideal choice. In December, Meghan visited the ACU at King's College London to discuss higher education opportunities for young people all over the world. Discussion focused on the role of universities in addressing human trafficking and modern slavery, gender equality and inclusion, peace and reconciliation, and climate change and resilience. 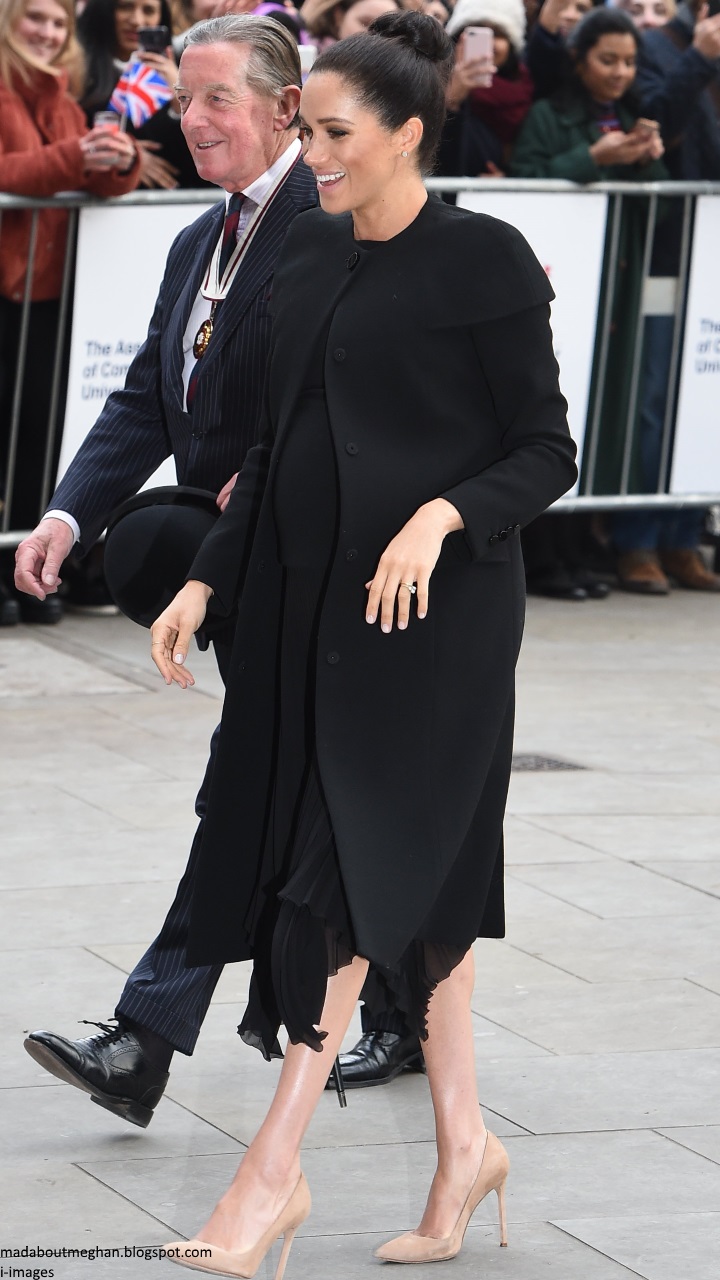 Established in 1913, the Association of Commonwealth Universities is the world’s first international university network, and remains the only accredited organisation representing higher education across the Commonwealth. Founded to lead "common action in matters of common interest", the ACU is governed by its member institutions through an elected council. A UK-registered charity, it received a royal charter in 1963 and, in 1986, Her Majesty the Queen became its patron. The Palace said: "As a university graduate, Her Royal Highness is a strong advocate of accessible education for all. During her recent visit to Fiji, the Duchess announced new Gender Grants for ACU member universities in the Pacific to fund new learning initiatives aimed at empowering female university staff and promoting gender equality." 'We are absolutely delighted that HRH The Duchess of Sussex has chosen to become Patron of the ACU. The Duchess shares our passion for the transformational power of higher education, and Her Royal Highness' support will help champion higher education as a force for good in the Commonwealth and beyond. We would like to thank Her Majesty The Queen for her support, and we look forward to working closely with The Duchess as our Patron.'


Yesterday Prince Harry attended a Commonwealth youth event. Lord Tariq Ahmad, Minister of State for the Commonwealth was in attendance and spoke to reporter Omid Scobie about the work Harry and Meghan are doing. "Both the Duke and Duchess are fantastic role models for today’s youth‚ it’s evident not just in what they say but also the work they do. They're a very dynamic couple." 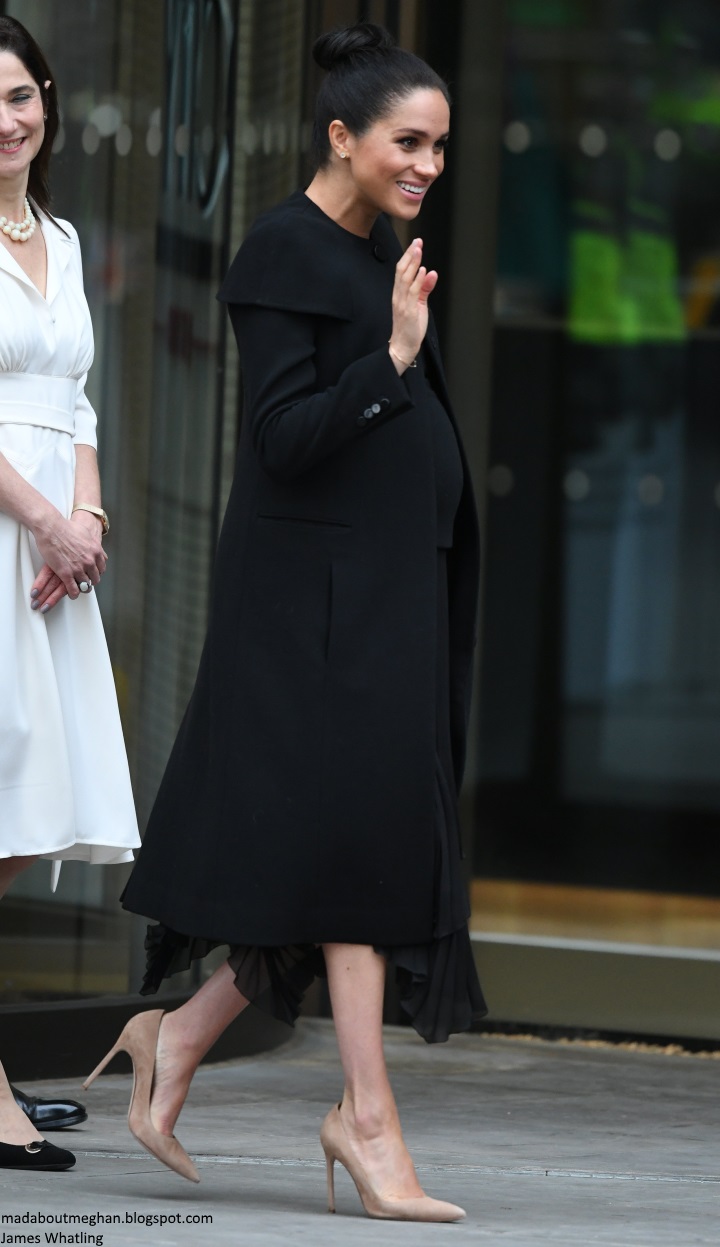 To say the crowds were out in force to see the Duchess today would be something of an understatement...


Cathy and her colleagues couldn't resist a peek from their office building across the street. 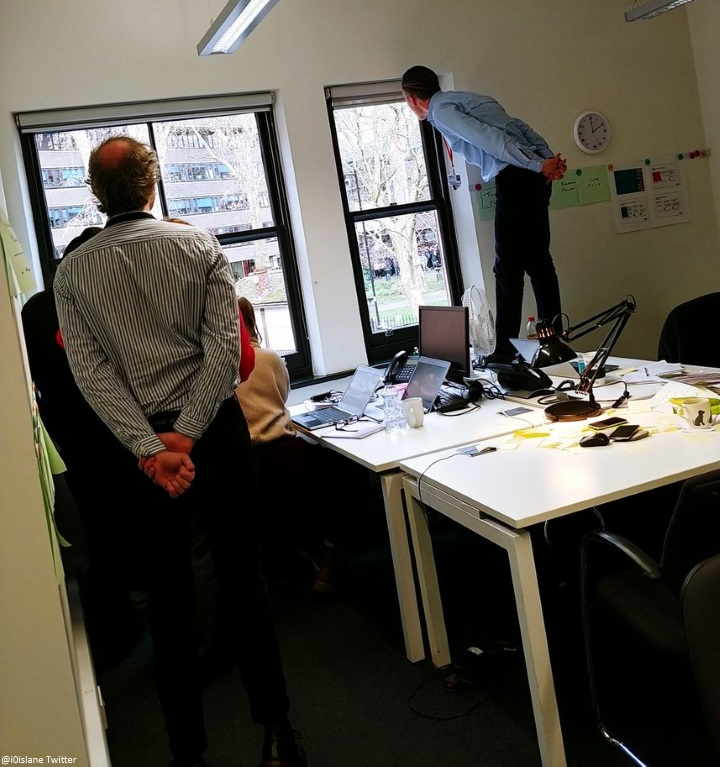 'Madeleine Harper, 25, who studies law at City University told FEMAIL: ‘It was chaos! They've got a huge area for her and closed off all the entrances to the university building - and there were crowds everywhere. My lecture was cancelled cause it was in that building and the library was full with everyone trying to see her!'


Kensington Palace said: "As a university graduate, Her Royal Highness is a strong advocate of accessible education for all." 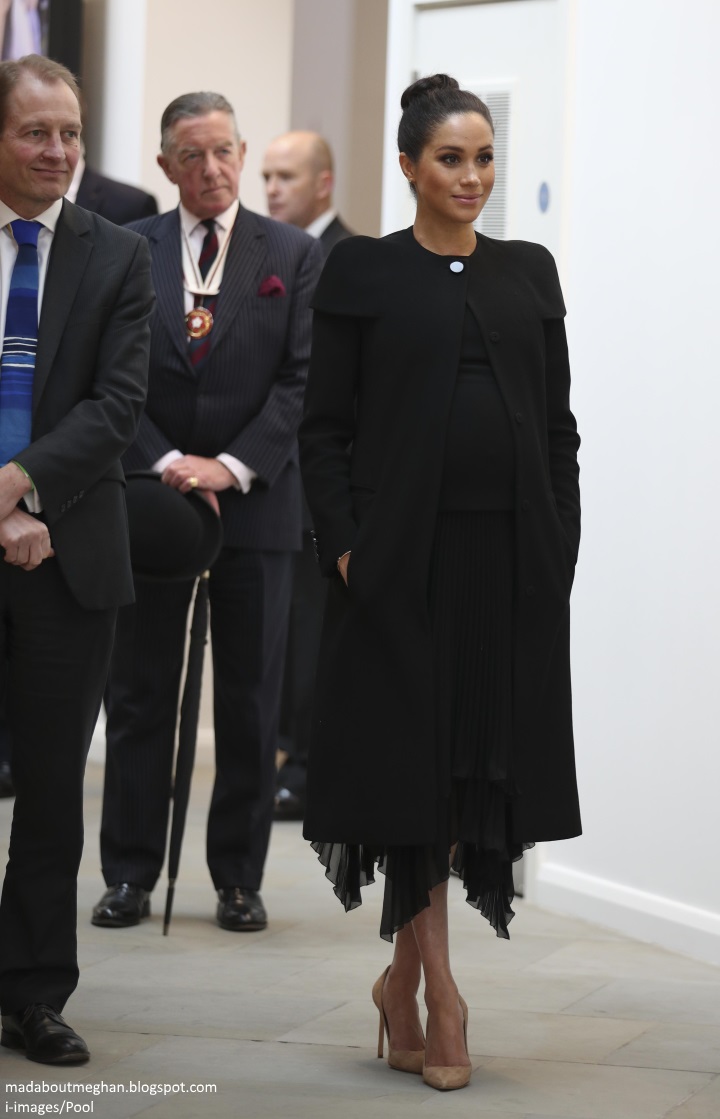 The Duchess was greeted upon arrival. 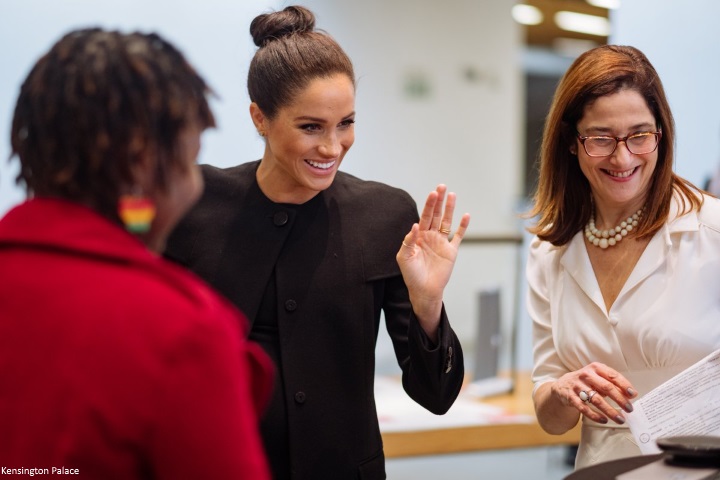 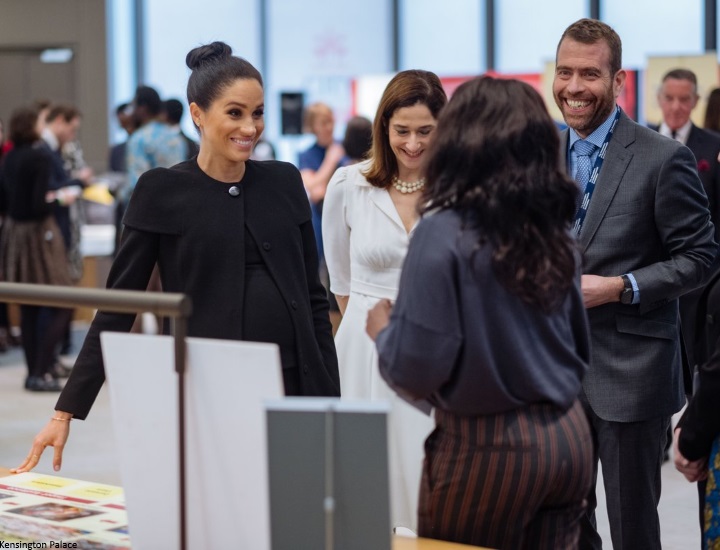 Meghan met with past and current scholars to hear the impact of this prestigious scholarship scheme. 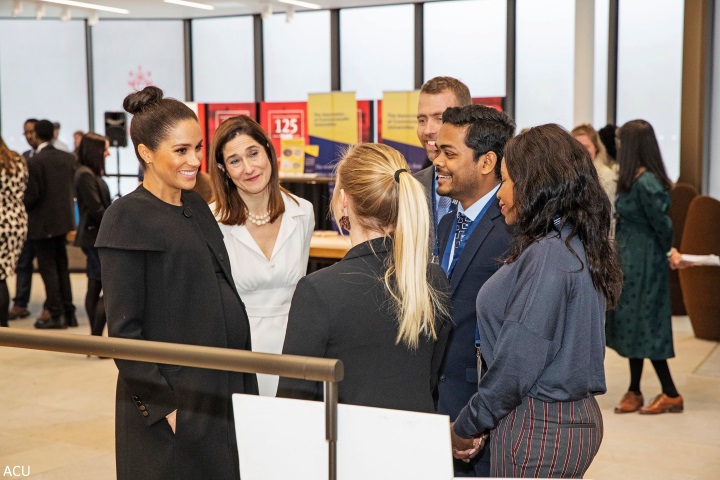 The Duchess met students from the Commonwealth now studying in the UK, for whom access to university has transformed their lives. Meghan met Devika, a Marshall Scholar from the USA, who is currently studying Applied Theatre at The Royal Central School of Speech and Drama. 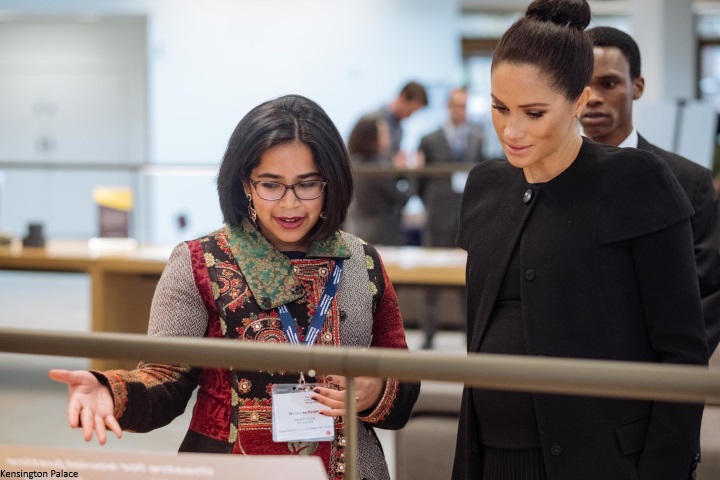 Below, the Duchess with Ishrat, a Commonwealth PhD Scholar from Bangladesh. She talked about her work and the ACU's Peace and Reconciliation Network, which brings universities together to boost their role in truth-telling and reconciliation as part of their wider communities. 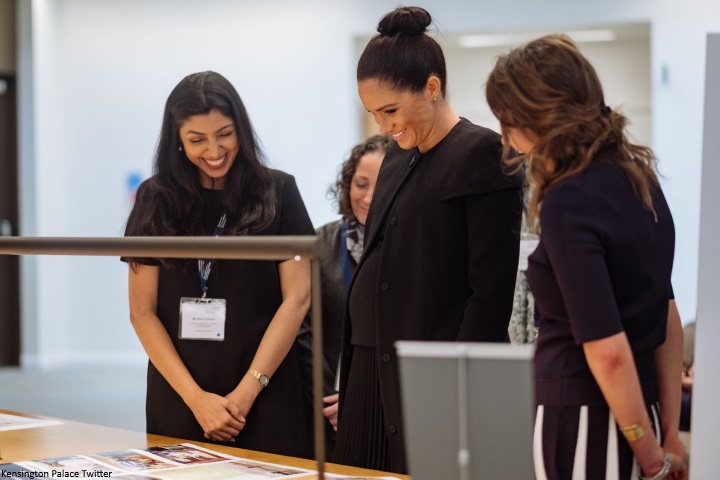 The Duchess met Mayamiko, a scholar from Malawi, and spoke with fellow scholars Hilary, Ntani and Almachius via Skype. 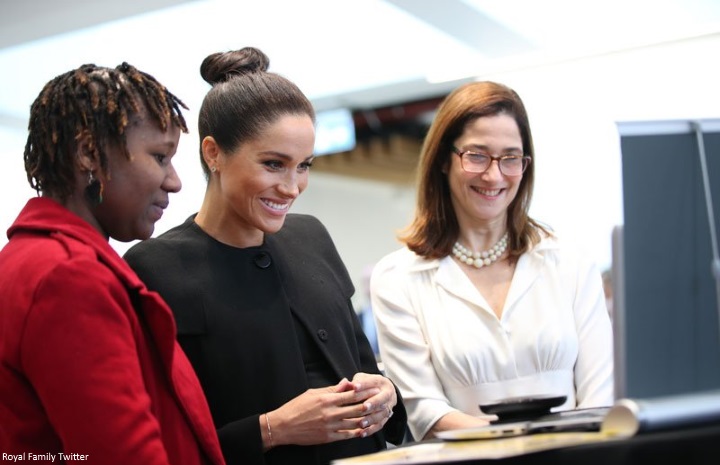 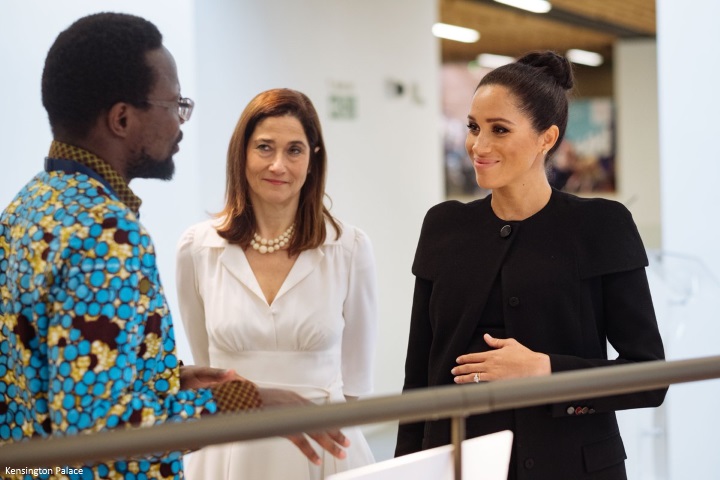 More from the Mail:

'Dr Ephraim Kisangala said: 'The Duchess was very passionate about our work, I could tell she had a genuine concern for the women we are trying to help. 'She has been to Africa and has also identified the problem herself in the past for the women who are suffering due to the attitudes towards menstruation across the world. My research is specifically targeted at finding solutions to assist women in refugee settlements in Uganda and the Duchess said more must be done to help these women. The most affected are women and children who flee without even the basic of necessities.

'I told the Duchess how Uganda host the second largest number of refugees in the world, 70% of whom arrived in the last few months. The Duchess said to me how shocked she was and how it was so important to raise awareness of this issue so that more can be done.'


The Duchess was shocked to hear  about the lack of diversity among academics at universities around the UK. 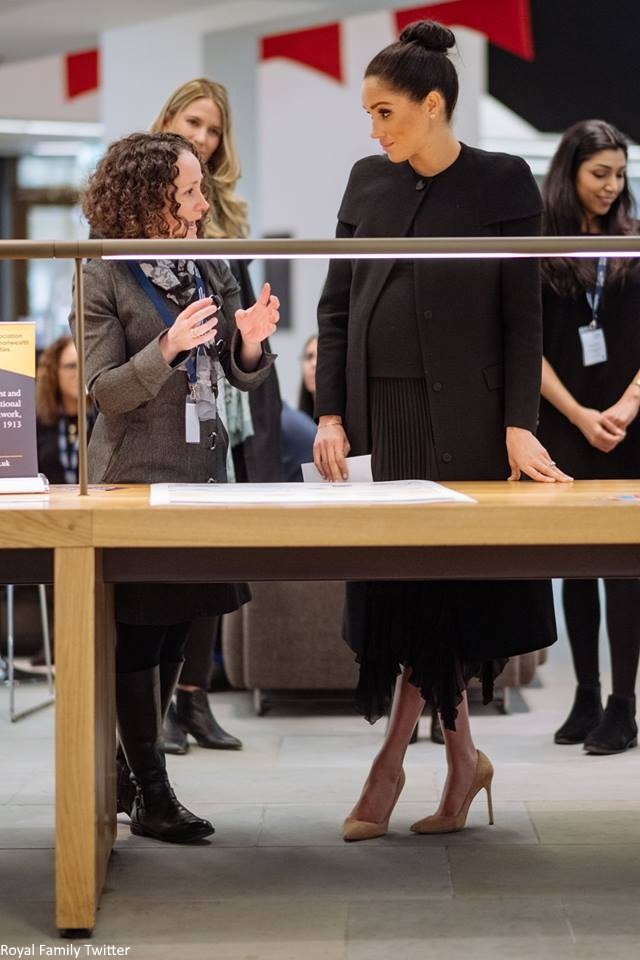 Meghan asked aide Amy Pickerell to screenshot a sheet of data for her own notes. Rebecca English reports:

Dr Cowen, who is Manchester University’s lead for equality, diversity and inclusion, pointed out the research from Advance HE that revealed 68% of UK professors were white males, 23% white female, 6.5% black and minority ethnic (BME) male and 2% BME female.

The duchess turned to her private secretary Amy Pickering and asked her to take a picture of the data relating to the 2016-17. Dr Cowan, who supports ethnic minority and female staff at Manchester University, said: “She was really surprised, she was like ‘oh my god, really, we need to get a photograph of this’.”


Meghan stayed over twenty minutes longer than scheduled to ensure she met with as many students as possible. Russell Myers reports today was very much about "listening and learning about the vast range of work done by the ACU". 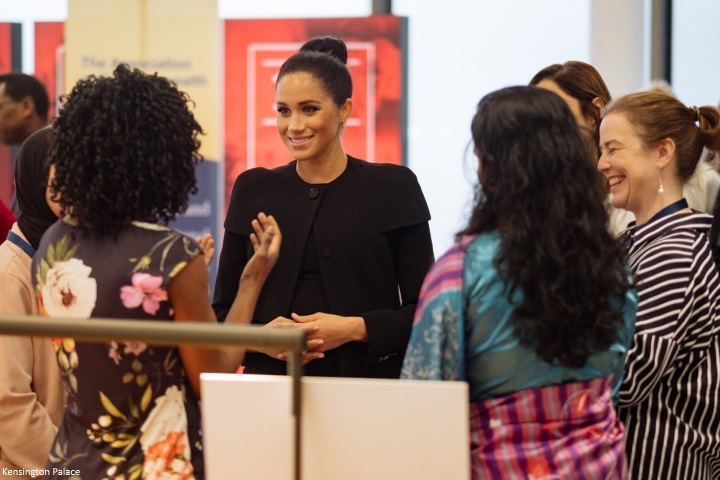 As Meghan prepared to leave, the crowds began to scream 'Meghan Meghan'. 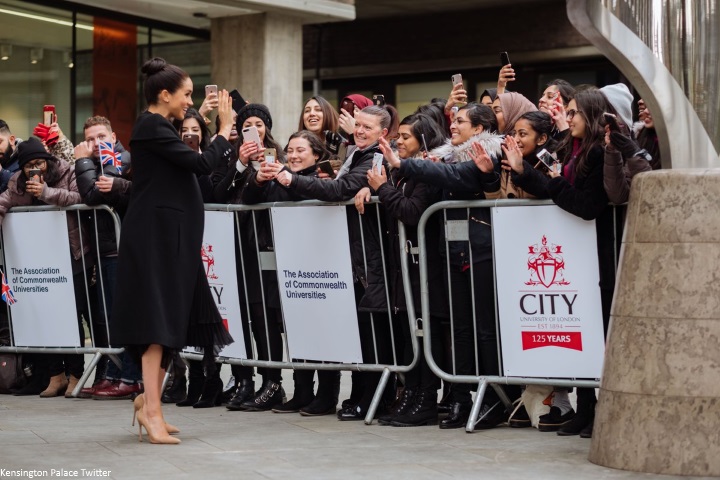 The reaction called for a brief impromptu walkabout. 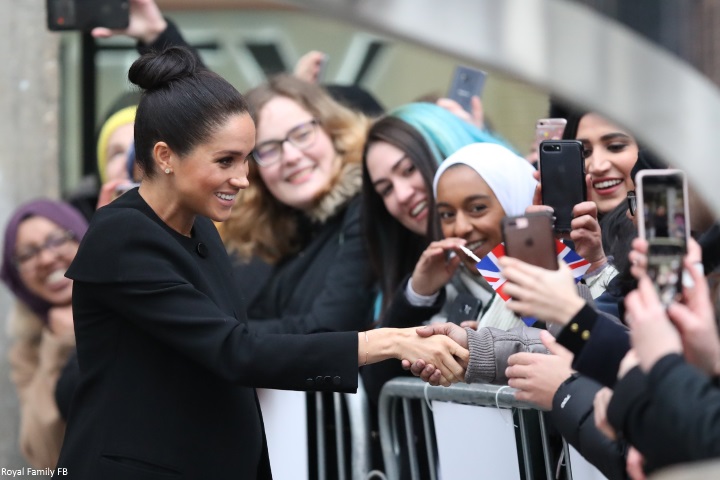 View footage from the departure at the end of the video. It's a nice recap of the visit.


The Duchess brought back her Givenchy black coat with capelet detail for the outing.

Readers will recall she debuted the coat on Remembrance Sunday in November. 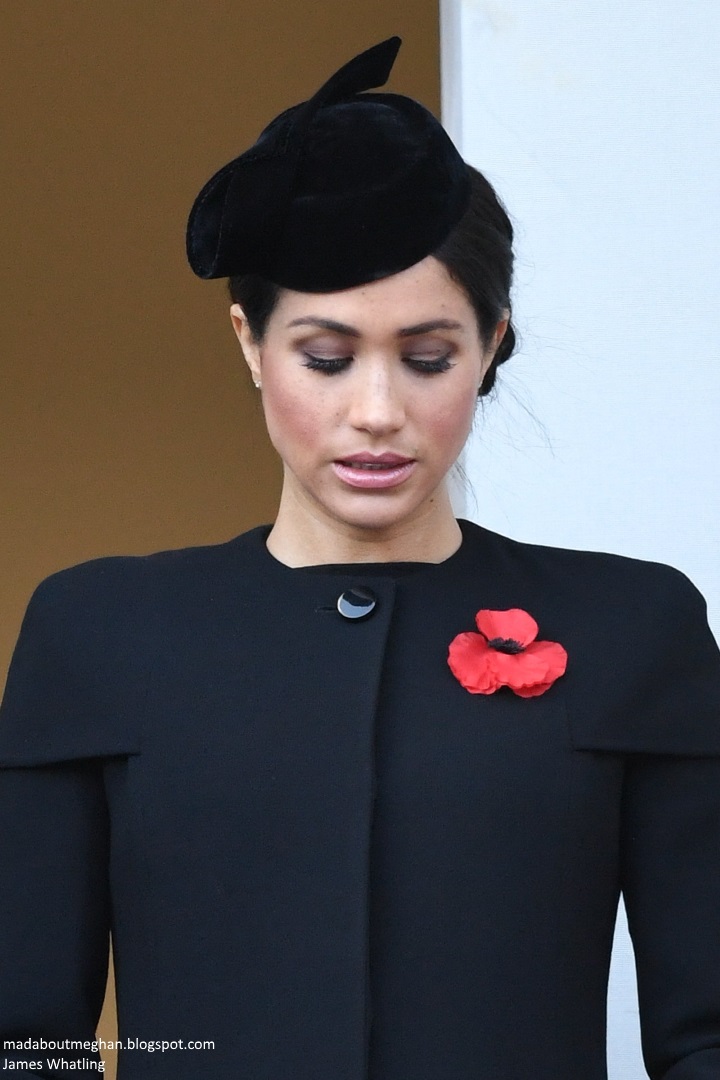 Meghan teamed the coat with a bespoke Givenchy dress with a pleated skirt (with thanks to Meghan's Mirror). A closer look at the skirt portion which features a tiered hemline. 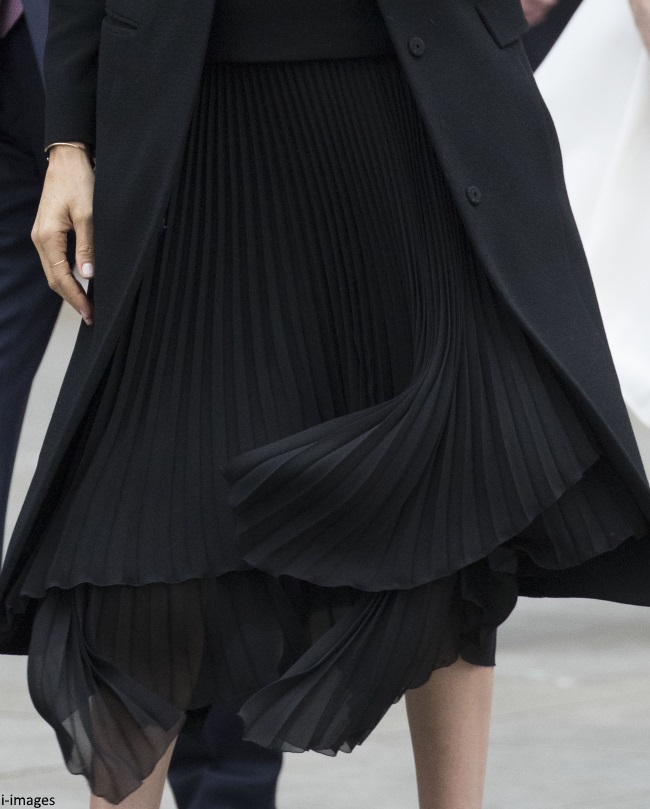 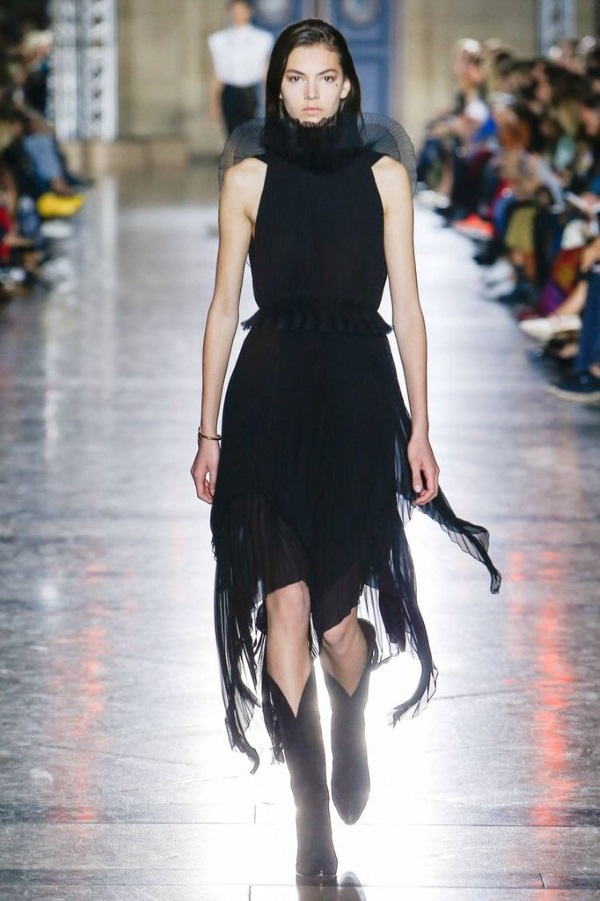 A closer look at Meghan's pumps. It appears they are a Manolo Blahnik pair. 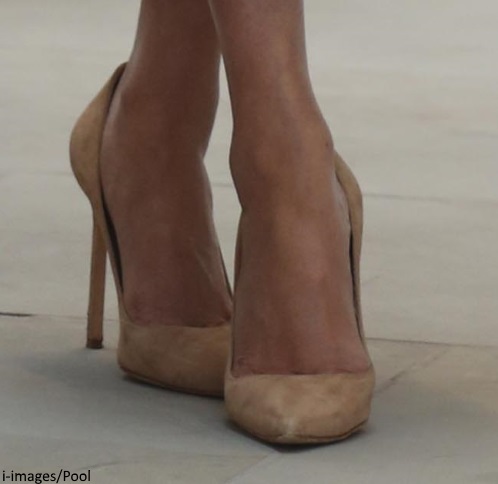 And accessorised with her $145 Dean Davidson Signature Knockout studs. 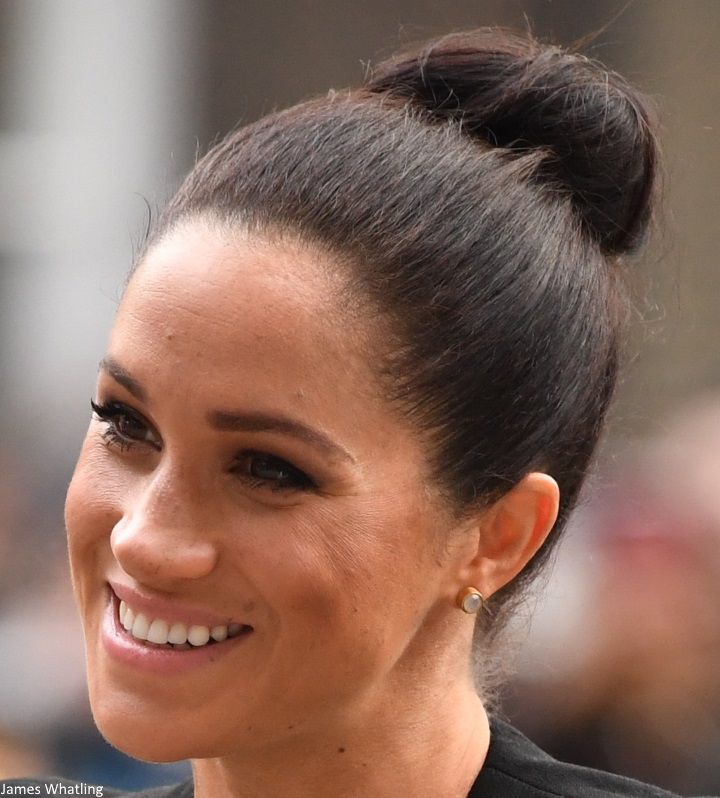 In other news, ITV's Chris Ship reports Harry and Meghan are planning to move into Frogmore Cottage in March.

'Prince Harry and Meghan plan to move out of Kensington Palace in March - at least a month before their baby is due. The couple are currently overseeing renovations at their new home at Frogmore Cottage near Windsor Castle.

The move out of London was announced by royal officials at Kensington Palace at the end of last year, but they did not give a timescale for the move. ITV News has been told the Duke and Duchess of Sussex have pencilled in a moving date of March so they can get settled into their new home several weeks before Meghan has their first child.'


Meanwhile, Camilla Tomniey reports rumours the Duchess of Sussex will give birth at the Lindo Wing are doing the rounds at St Mary's hospital. It's worth noting there's been no palace confirmation on this. More from Camilla's story for The Telegraph:

'Staff at the Lindo Wing have been advised not to take holiday in the spring, sparking speculation the Duchess of Sussex plans to have their baby there.

Contrary to reports the former American actress plans to give birth on the NHS, she may instead follow in the footsteps of the Duchess of Cambridge, who had her three children at the private maternity unit at St Mary’s Hospital in Paddington.

A source told the Telegraph: “Staff at the Lindo Wing have been asked not to take holiday in April. Everyone thinks it’s got something to do with the royal baby but no one is confirming anything.”


We'll see Harry and Meghan in Bristol tomorrow for a day of engagements!
Posted by Admin at 1/31/2019