The Duchess of Sussex left New York last night following a whirlwind five nights in the city. The trip marked her first visit back to the US since she and Harry married and offered an opportunity to spend time with friends she hasn't seen in months. Click here to view additional images on The Mirror. 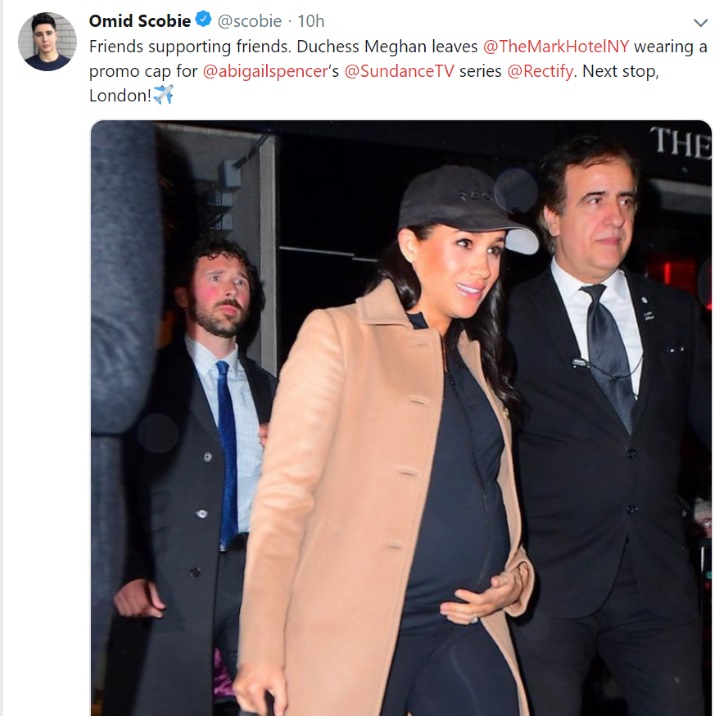 Several reliable reporters understood the Baby Shower took place on Tuesday. However, Tatler broke the news it was in fact scheduled for Wednesday afternoon. "According to a source, the baby shower is being hosted by Meghan's close friends, including Amal Clooney and Serena Williams. Williams reportedly chose the elegant, discreet spot after visiting several other properties in the area, clearly being a fan of its home from home aesthetic. The baby shower will kick off with a flower arranging lesson accompanied by a dessert table prepared by the restaurant’s head chef, Jean-Georges Vongerichten, who will be there to greet them." The shower took place in the stunning Penthouse Suite with Meghan reportedly wearing a sleeveless polka dot dress. 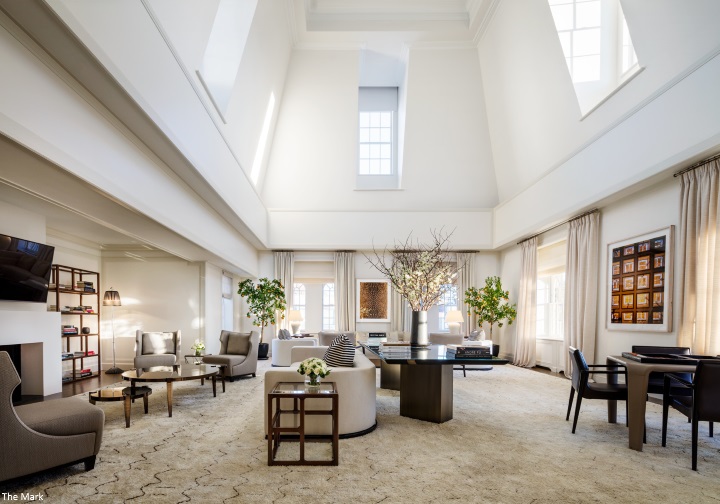 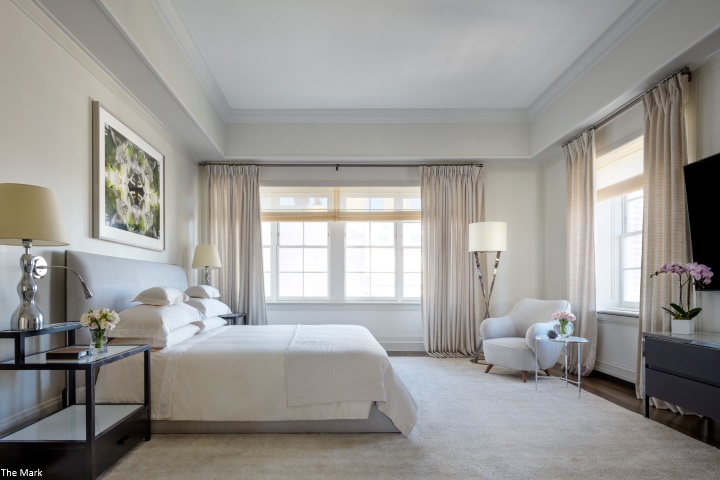 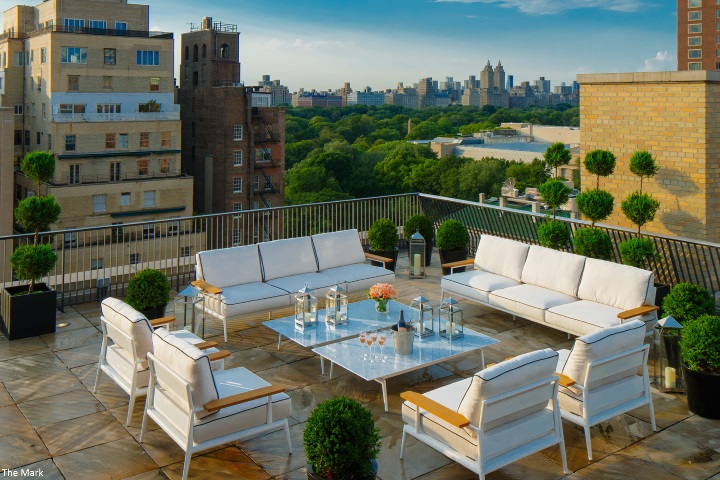 Host Serena Williams posted a selfie from The Mark hours before the shower. 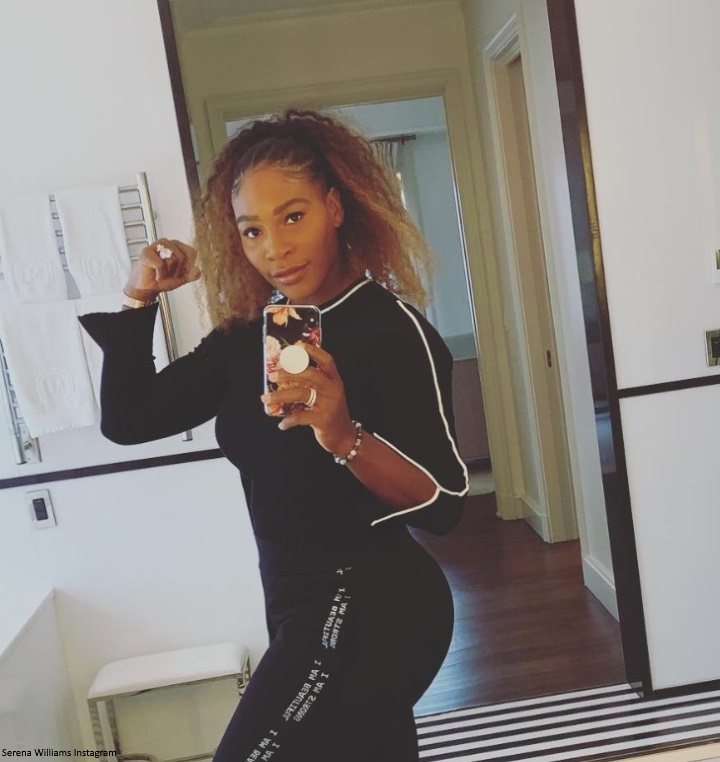 Meghan's friend and make up artist Daniel Martin shared a look at sweet treats from the shower. 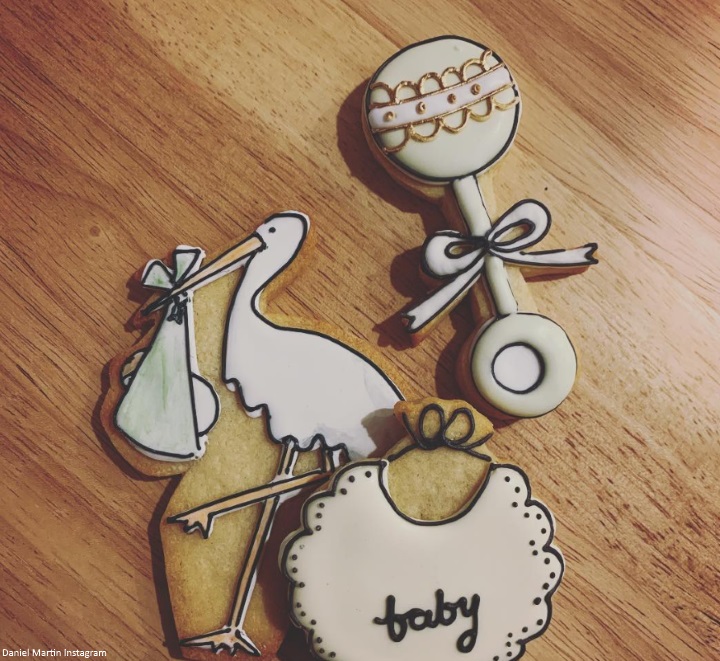 Guests were reportedly given Away Travel luggage as party favours. 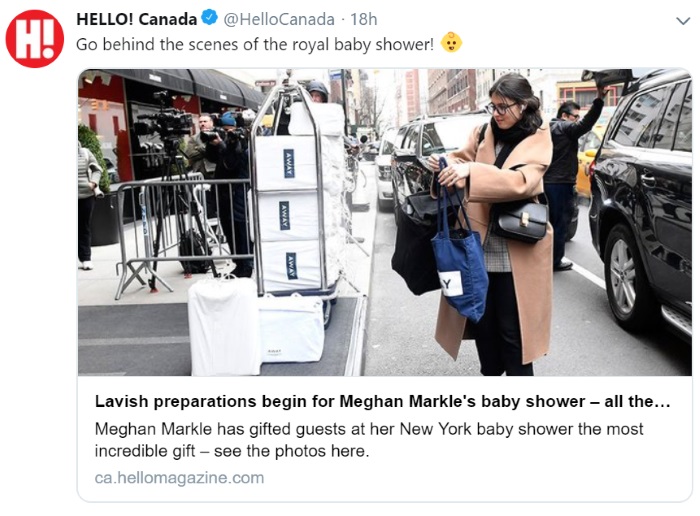 The ethical company donate a portion of their profits to Peace Direct, a nonprofit building peace in conflict areas all over the world. They have stores in both London and New York. 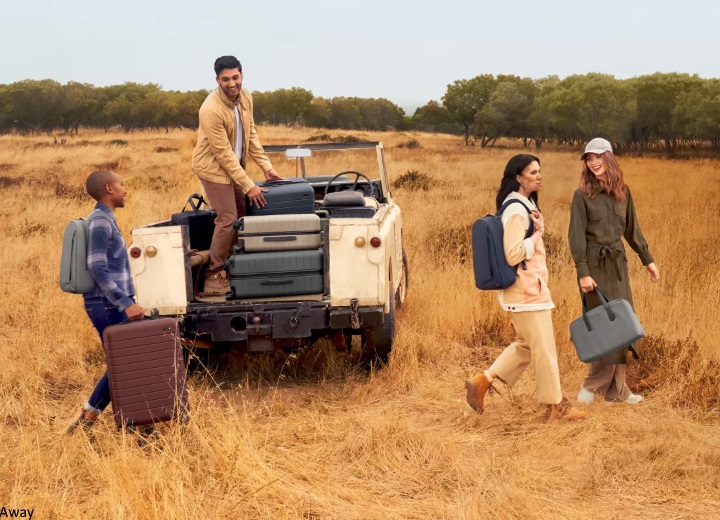 The Duchess looked casual as she left the hotel for the airport. Meghan wore a camel coat and a promotional cap for Rectify, a series Abigail Spencer starred in several years ago. (Abigail was seen wearing the cap yesterday). 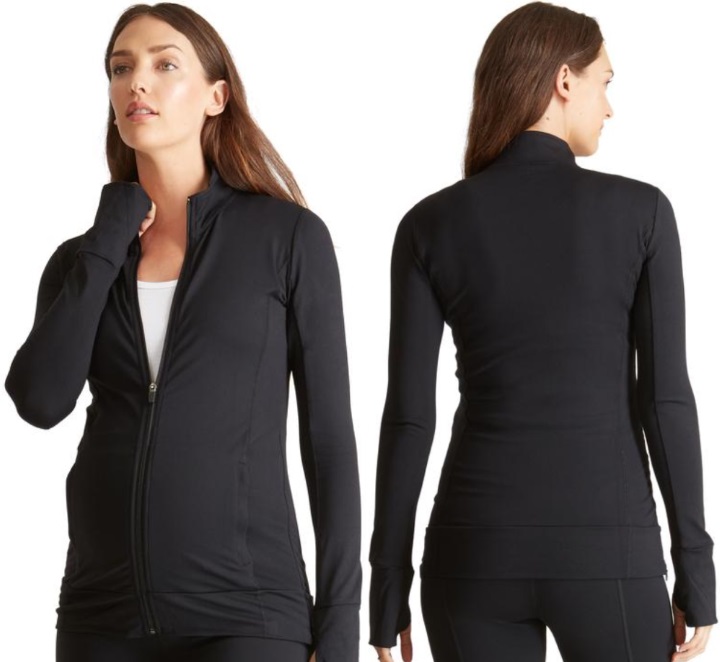 Meghan teamed the jacket with the LuluLemon Align Pants. They are available in multiple colours for $98. 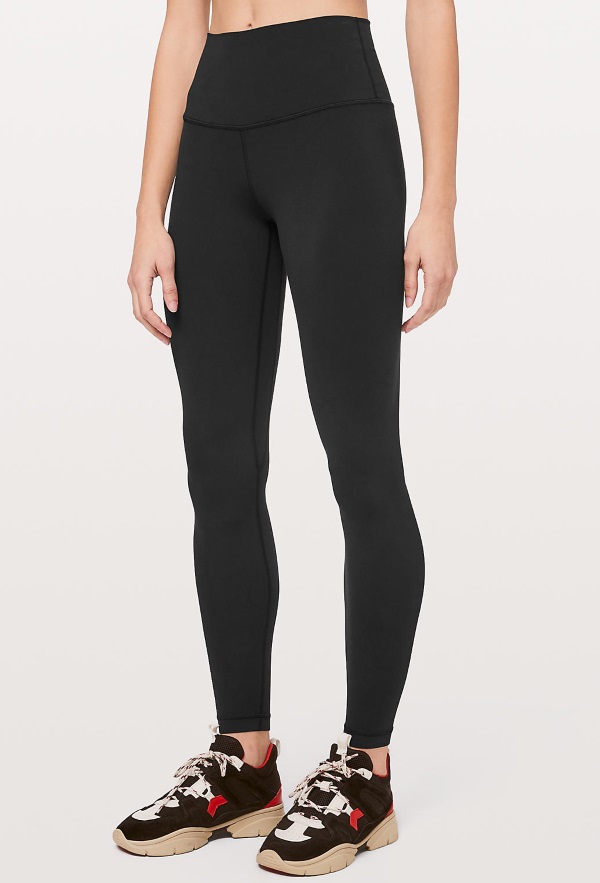 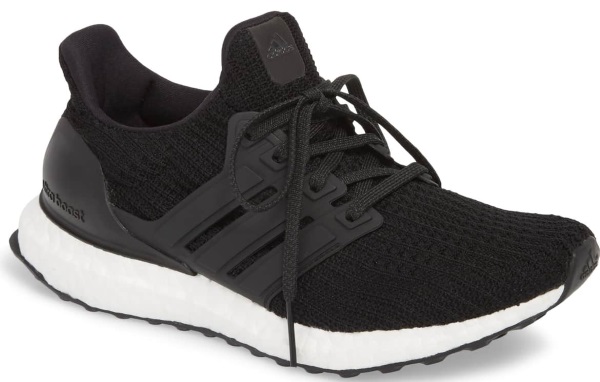 And accessorised with the $850 Jennifer Meyer Mommy necklace (Meghan's is Mummy instead of Mommy). I expect the piece was a gift from the shower.

A word of thanks to Anne Young, Heaven, Meghan's Mirror, What Meghan Wore and Meghan's Fashion for their speedy ID work on the look.

Gayle King said that Meghan arranged for the flowers they arranged to be donated to different charities. "I thought it was a very sweet thing. It just speaks to who she is. She's very kind. I think her friend just wanted to celebrate her." King added "She didn't open any of the gifts because she wants to do that when she goes back to London, when she and Harry are back together."


"I've never seen anything like this at a baby shower."@GayleKing says guests made flower arrangements at Meghan Markle's baby shower that @RepeatRoses donated to different charities. "It just speaks to who she is." 🌹👶 pic.twitter.com/IlCpZ6ZpeZ
— CBS This Morning (@CBSThisMorning) February 21, 2019

'The organization supplies previously-used floral arrangements to facilities like hospitals, hospices, nursing homes, cancer treatment centers, and domestic abuse and homeless shelters, and ensures the arrangements are composted once they can no longer be enjoyed.' 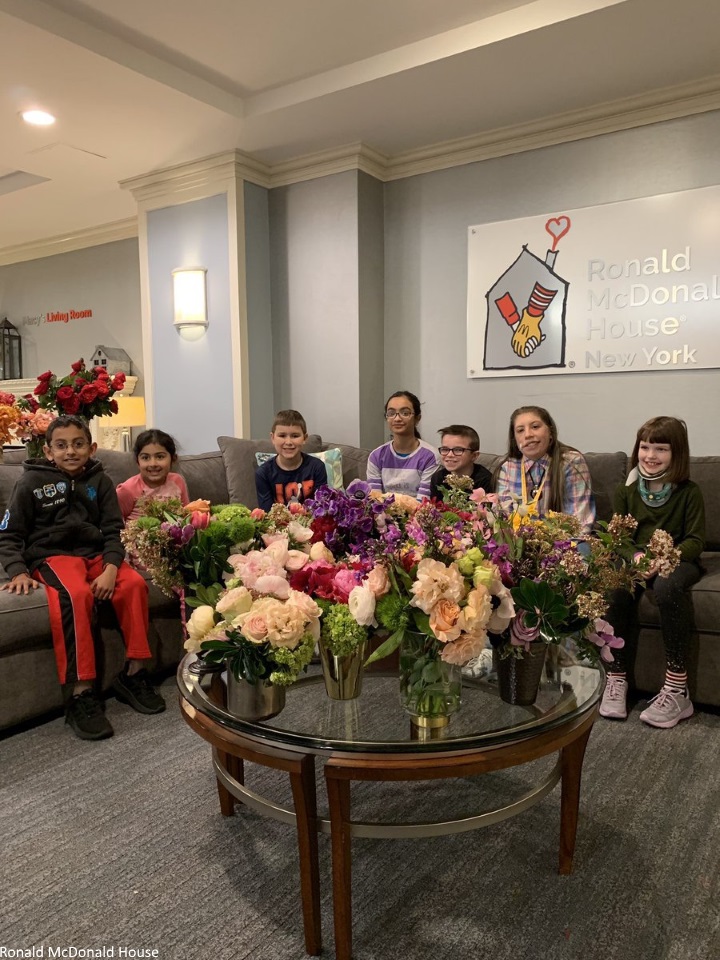 Diana visited the US on a number of occasions throughout her life and the media reaction was quite literally off the charts. The late Princess loved The Carlyle Hotel and there were similar scenes outside the popular location when she visited to those we've seen outside The Mark this week.

We should bear in mind, Meghan is an American. She was born and raised in the US. It seems entirely unfair to suggest she should never return and enjoy a weekend in a city she loves because she's a member of the royal family. Many, many royals do so - the difference is the level of interest in Meghan is enormous and for that she cannot be blamed. We have every right to expect our royals to work hard on behalf of Her Majesty and to represent the UK at home and abroad with professionalism and dignity. Meghan has done that with aplomb, even her most ardent critics struggle to fault her efforts in her role. I'm uncomfortable with the notion we have the right to dictate their private lives though, and that's very much what we've seen in recent days. Yes, it was a lavish trip. Yes, the shower looked incredibly expensive. We have to remember it was hosted by Serena Williams, a hugely accomplished and wealthy tennis star. If Meghan's friends wanted to go all out for her shower, then they have the right to do so. Every single member of the royal family lives a life of immeasurable luxury; they are in very fortunate positions filled with perks. If Meghan were jet-setting on a regular basis and doing very few royal duties, I would be the first to express disappointment. That's very much not the case though. I don't believe the occasional trip to the US should be a problem. When she was entirely absent from the public eye outside of public duties and keeping an amazingly low-profile, she received a full blown character assassination in return. 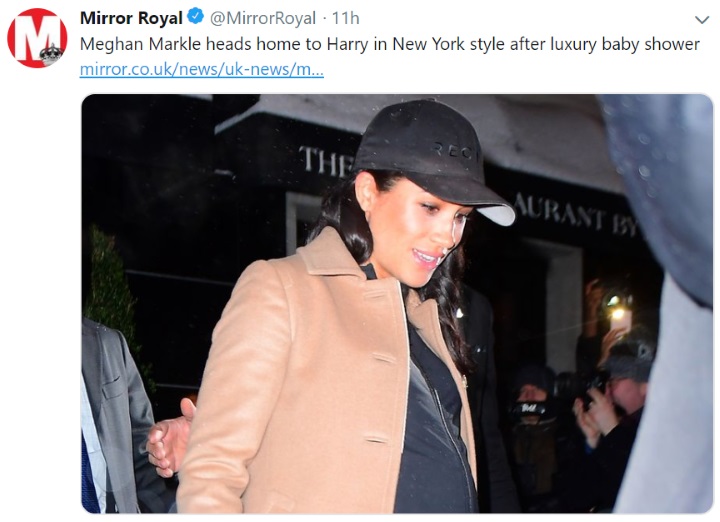 In a piece for The Guardian, Zoe Martin writes: Whatever Meghan does, she’s damned. Let’s not repeat history:

'The level of scrutiny the Duchess of Sussex receives is devoid of human feeling. This vilification must end. She can’t leave the house, pregnant, without being accused of “flaunting” her bump. She can’t walk into a room without wild speculation about whether or not she breached a protocol, by people who have no idea what royal protocols are. If a friend comes to her defence and asks people to stop hounding her, then who does she think she is, having a friend like that? OK, so maybe it is George Clooney. Someone’s got to be his friend. He might be perfectly nice. If she smiles for the cameras, then she’s luxuriating in the attention. “She’s being victimised, you say, George; you with your fancy hair and your coffee habits … then why is she smiling? Riddle me that.”

If she goes to New York, she’s pointedly “without Prince Harry”. But if she had taken Prince Harry, then you can guarantee that she would have been dragging her husband away from his duties, to partake of her frivolity.

If she does anything remotely normal, she besmirches the majesty of her office; if she looks at all grand, she’s got ideas above her station. The norms of the lowest-grade analysis – know thy place, woman, keep your eyes down – have permeated the rubric. Respectable news outlets find themselves wondering what the devil she thinks she’s doing, meeting her friends in an upscale hotel.'


The BRIT Awards took place last night. Although not present at the event, Beyoncé and Jay Z won the award for Best International Group. The couple recreated one of their music videos for a brief acceptance video. They used the opportunity to lend support to the Duchess, posing in front of a portrait of Meghan by Tim O Brien. Beyoncé later wrote on Instagram: "In honor of Black History Month, we bow down to one of our Melanated Monas. Congrats on your pregnancy! We wish you so much joy."


See you on Saturday evening for the beginning of the Morocco visit!
Posted by Admin at 2/21/2019