'We Are With You': Harry and Meghan Visit New Zealand House Following Christchurch Tragedy

The Duke and Duchess of Sussex visited New Zealand House in London this afternoon to pay tribute following the horrific tragedy in Christchurch. 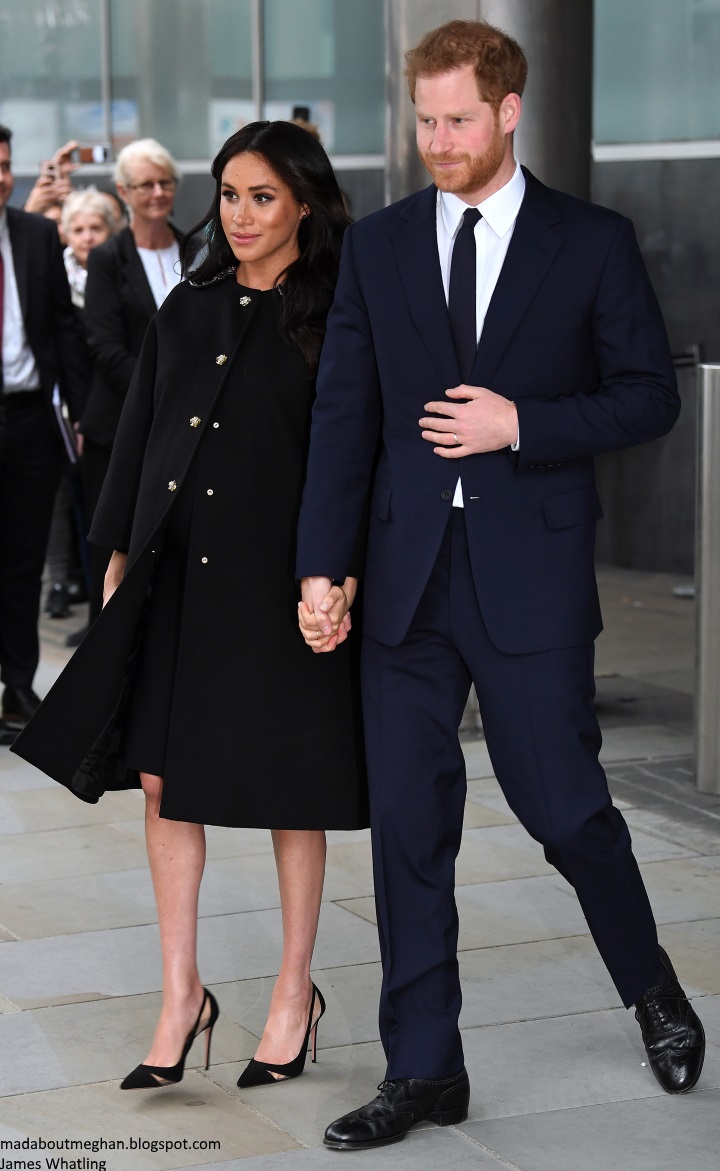 Her Majesty asked the Duke and Duchess to represent the royal family as they were the last members to visit the country. Although Meghan has completed all her public engagements before the arrival of Baby Sussex next month, she is still taking meetings and I very much expected to see her pay her respects with Harry. 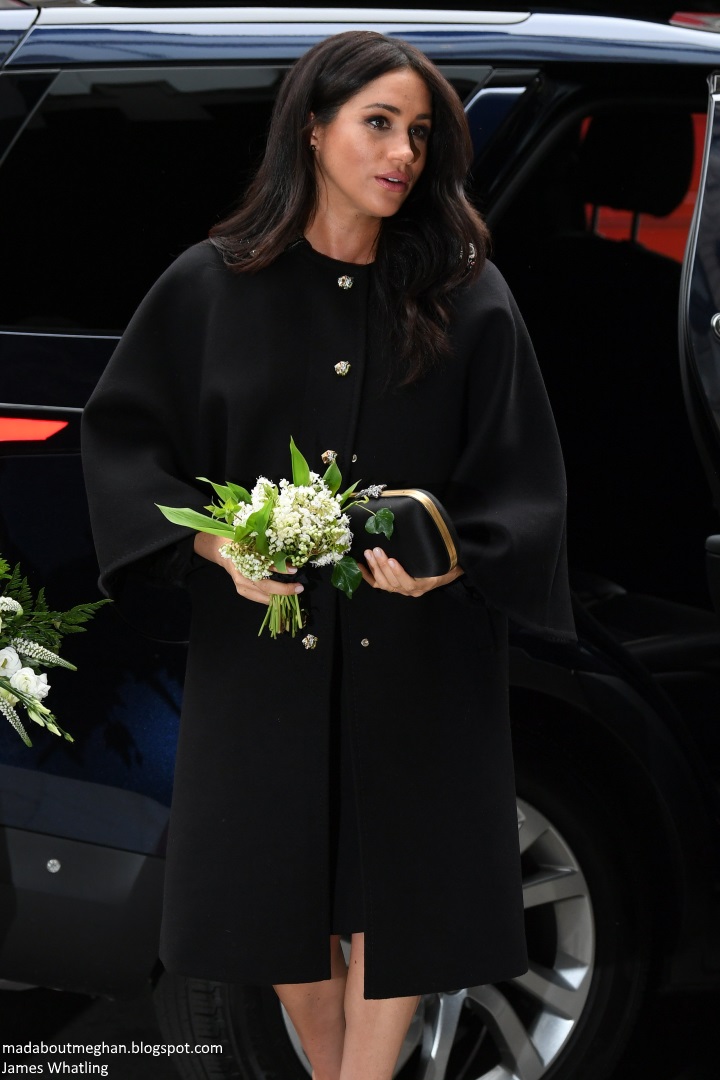 A joints statement from Harry, Meghan, William and Kate concluded with Kia kaha - a Māori phrase used by the people of New Zealand, meaning stay strong. "Our hearts go out to the families and friends of the people who lost their lives in the devastating attack in Christchurch. We have all been fortunate to spend time in Christchurch and have felt the warm, open-hearted and generous spirit that is core to its remarkable people. No person should ever have to fear attending a sacred place of worship. This senseless attack is an affront to the people of Christchurch and New Zealand, and the broader Muslim community. It is a horrifying assault on a way of life that embodies decency, community, and friendship. We know that from this devastation and deep mourning, the people of New Zealand will unite to show that such evil can never defeat compassion and tolerance. We send our thoughts and prayers to everyone in New Zealand today. Kia Kaha." 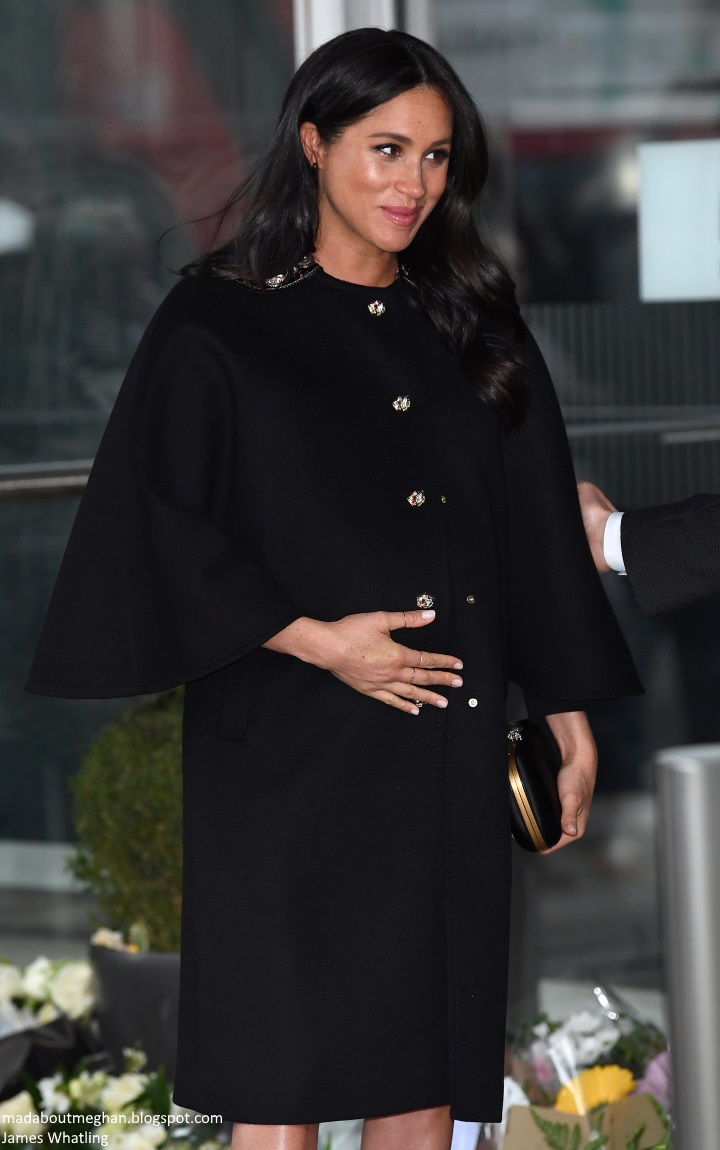 They were greeted with a traditional Hongi from New Zealand's High Commissioner Jerry Mateparae. " 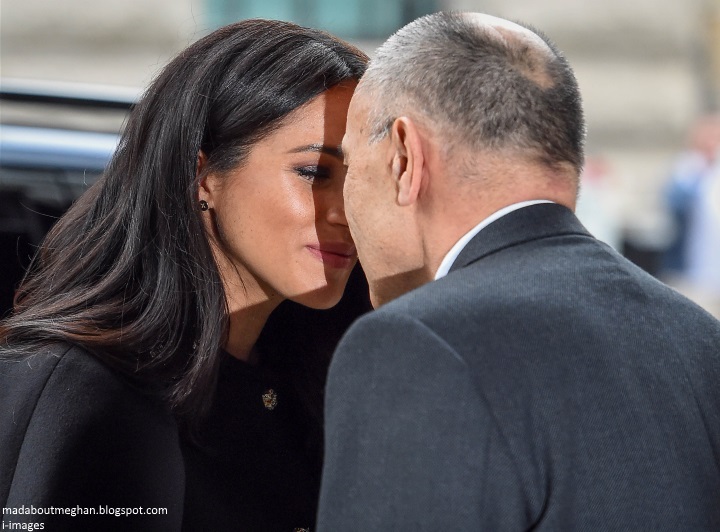 Meghan laid a bunch of flowers featuring hawthorn and lily of the valley. 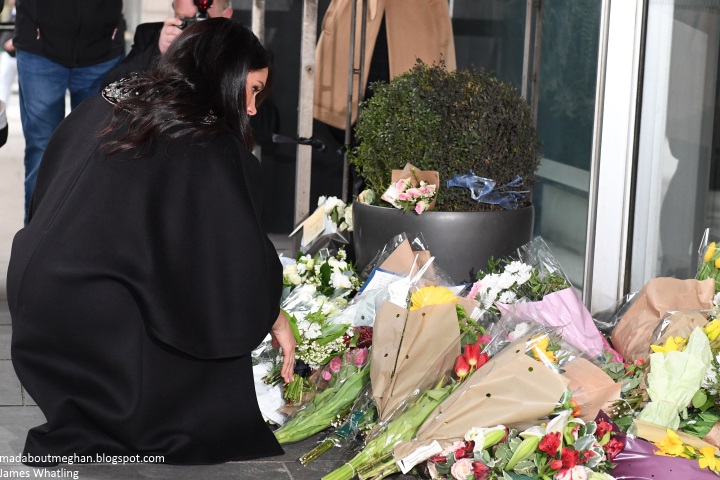 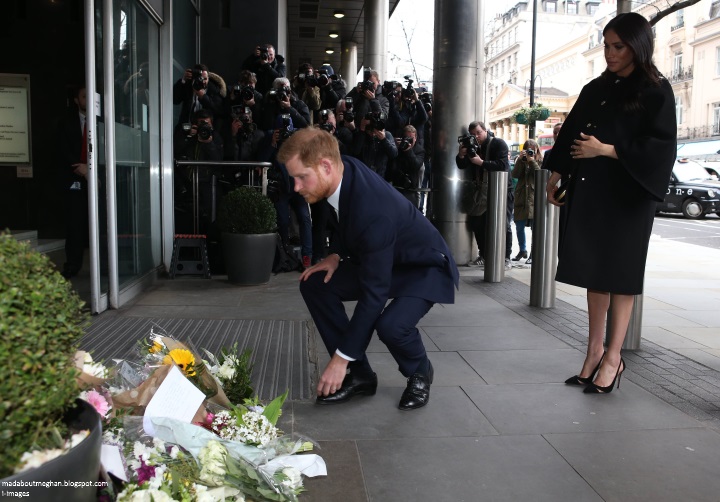 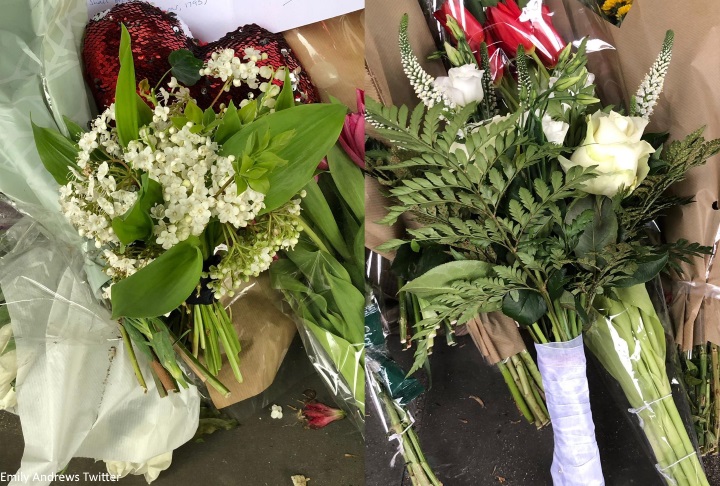 It was likely very important to Harry and Meghan to be there not only in their capacity as Commonwealth ambassadors, but as a mark of respect following the unforgettable reception they received in New Zealand. Day after day reporters commented on the warmth and hospitality the royal couple received there. 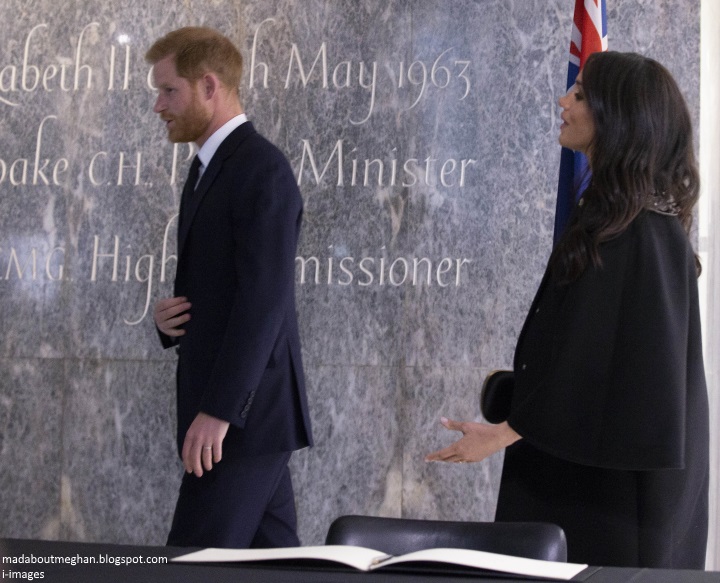 The couple meeting locals in Wellington during the tour. 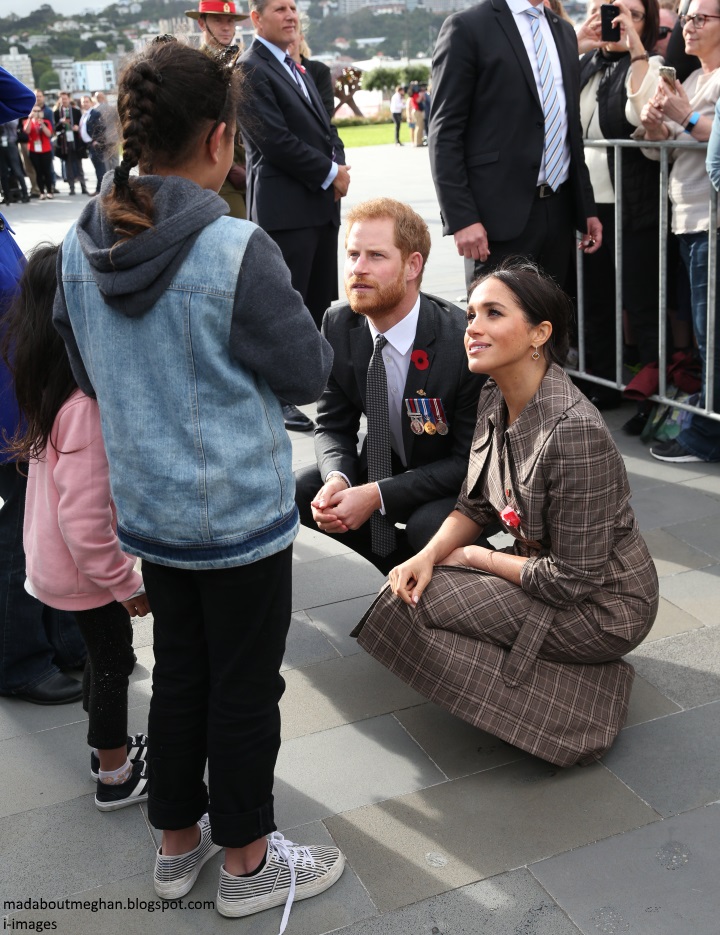 On Friday, fifty people lost their lives during two consecutive terrorist shootings at the Al Noor Mosque and the Linwood Islamic Centre in Christchurch. The ages of those killed ranged from 2 to 71. An additional fifty people were injured, with several remaining in a serious condition.

Thousands came together at vigils to show their support and solidarity for Christchurch. 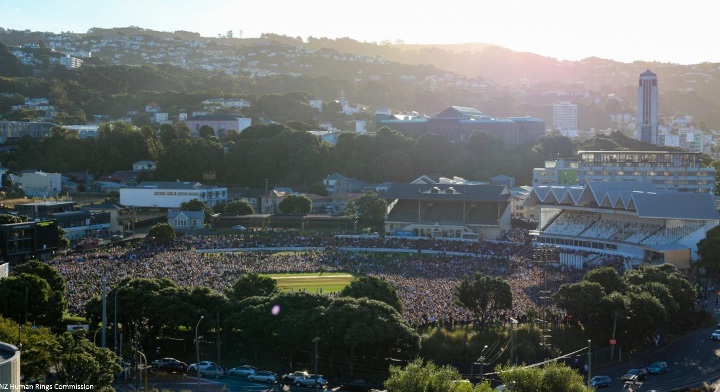 In a time of unimaginable tragedy, the strength, compassion and bravery of the people of New Zealand has been a shining light. These qualities have been exemplified by Prime Minister Jacinda Ardern. 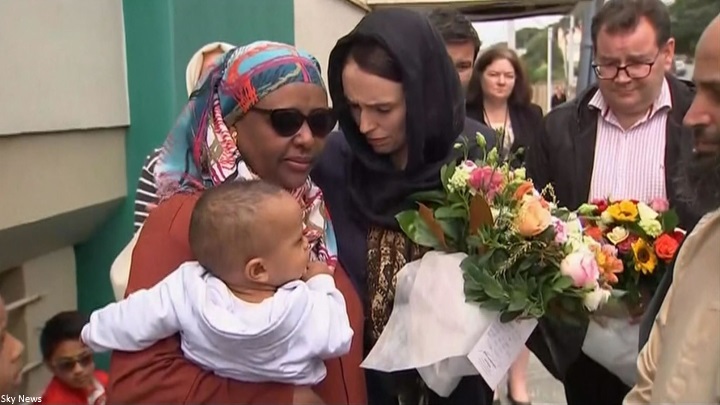 'The Kiwis know their prime minister has become a global symbol of healing in the aftermath of the Christchurch attacks. But just 17 months into her premiership, Ardern is now a figure of hope for a country in strife. Whatever their political affiliation, New Zealanders are united in respect for her leadership. In gestures big and small, she has demonstrated a human touch to dealing with hatred.

When families of the victims encountered problems, she sped up processing of visas for the overseas relatives and promised funeral costs would be covered by the government.'


The New Zealand Ministry of Foreign Affairs and Trade shared this video. "We utterly reject the ideology that led to this horrific attack on people at prayer. We are grateful for the show of solidarity and support pouring in from around the world, including from our friends in Islamic nations."

In a moving speech today, the Prime Minister addressed parliament and said: "Mr Speaker the 15th of March will now forever be a day etched in our collective memories. On a quiet Friday afternoon a man stormed into a place of peaceful worship and took away the lives of 50 people. That quiet Friday afternoon has become our darkest of days. But for the families, it was more than that. It was the day that the simple act of prayer – of practising their Muslim faith and religion – led to the loss of their loved ones lives. Those loved ones, were brothers, daughters, fathers and children. They were New Zealanders. They are us. And because they are us, we, as a nation, we mourn them. We feel a huge duty of care to them. And Mr Speaker, we have so much we feel the need to say and to do."

The Duke and Duchess praised the outstanding leadership PM Ardern has shown.

Harry and Meghan met staff from the High Commission. Meghan told them she was "just devastated" by the atrocity. 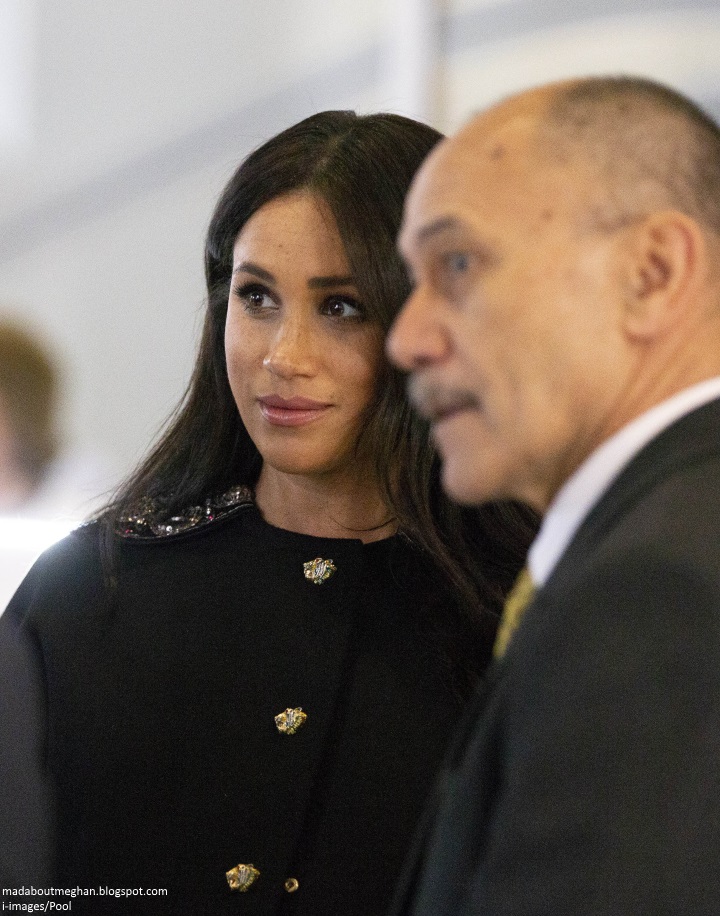 Meghan said 'we are with you', adding she was 'just devastated' by the atrocity, as she cradled her baby bump. Harry said 'it's just very sad' as he asked about their connections to Christchurch.

Sir Jerry said: 'We are overwhelmed by the tremendous amount of support we've received from across the UK. 'Their Royal Highness's visit is reflective of this outpouring of support and it was wonderful to welcome them to New Zealand House.'

The Duke and Duchess signed the book of condolences. Meghan wrote "Our deepest condolences...we are with you". Harry wrote the Māori word Arohanui which means "with deep affection". 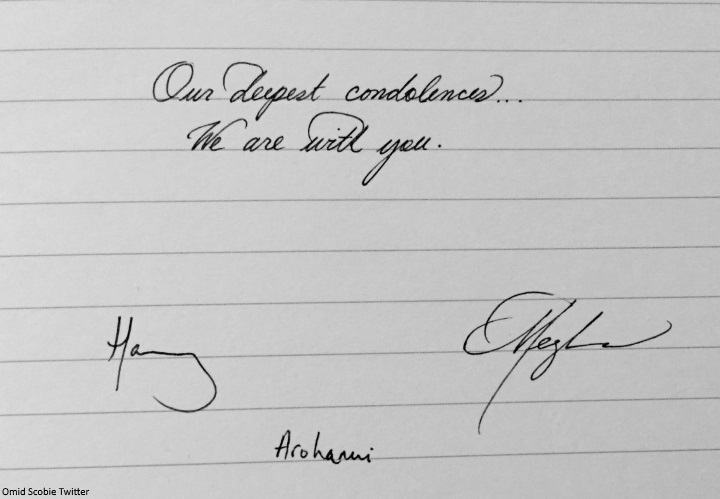 A video from the poignant visit. 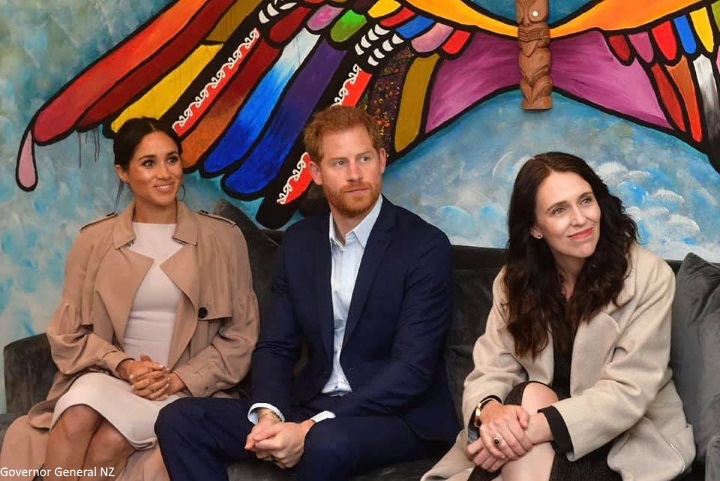 The Discologo stud earrings feature the native Miromiro feather, reworked into a kiss motif. In Māori mythology the Miromiro feather was a magic token of devotion that would bring loved ones back to you. Meghan and PM Ardern got along incredibly well during the tour and the Duchess was delighted to host her at Kensington Palace in January. 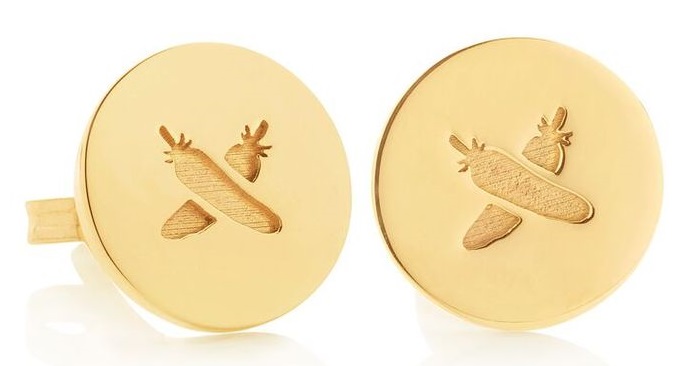 Given the incredibly sensitive nature of today's events, we'll keep the fashion details brief. The Duchess wore a black coat with embellished shoulder detail. Meghan's Mirror suggests it's a bespoke Gucci piece as it features their distinctive tiger buttons. 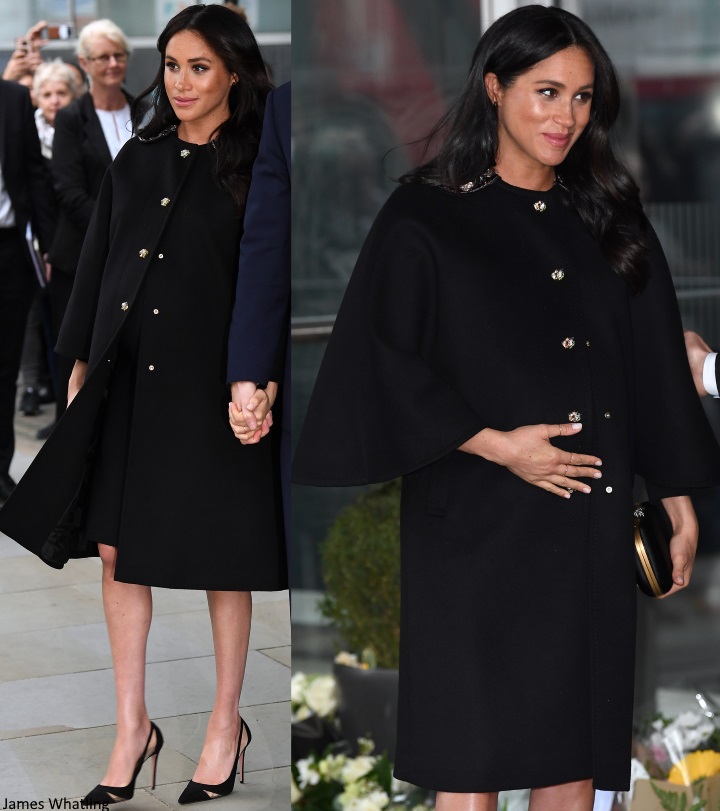 Meghan wore the Aquazzura Savoy pumps and carried the Gucci Broadway clutch (with thanks to What Meghan Wore).

For those wishing to sign the book of condolences in London, you can do so until Thursday evening. I know I speak for all of us when I say, our thoughts and prayers continue to be with the people of New Zealand.
Posted by Admin at 3/19/2019