The Duke and Duchess of Sussex walked the yellow carpet for the star-studded premiere of The Lion King in London this evening. 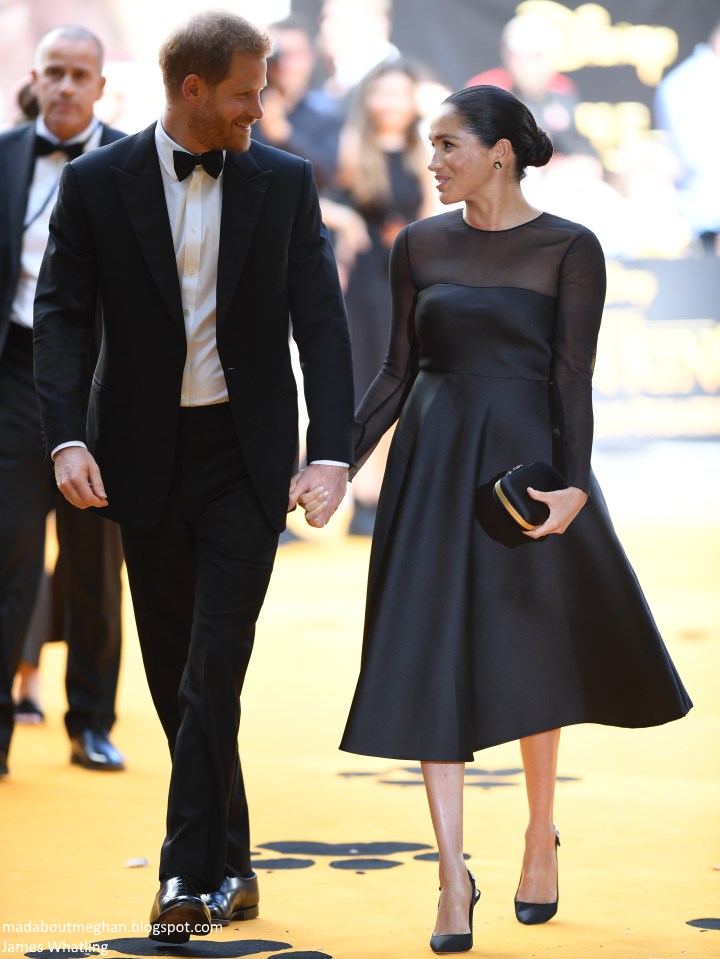 The appearance is one of several the Duchess is making during her maternity leave. Since Archie was born, we've seen Meghan at Trooping the Colour, Red Sox vs Yankees, Archie's christening, and two Wimbledon appearances in support of Serena Williams. Tonight's event marked a very special milestone for the Sussexes - their first movie premiere since their wedding. The Lion King is a true favourite of Prince Harry. He has admitted to watching the Disney classic over twenty times. In December 2016, the Prince took his then-girlfriend Meghan to watch The Lion King on the West end for a pre-Christmas outing. No doubt it will be a firm favourite in the Sussex household as Archie grows up; his cousin Prince George is said to adore it too. 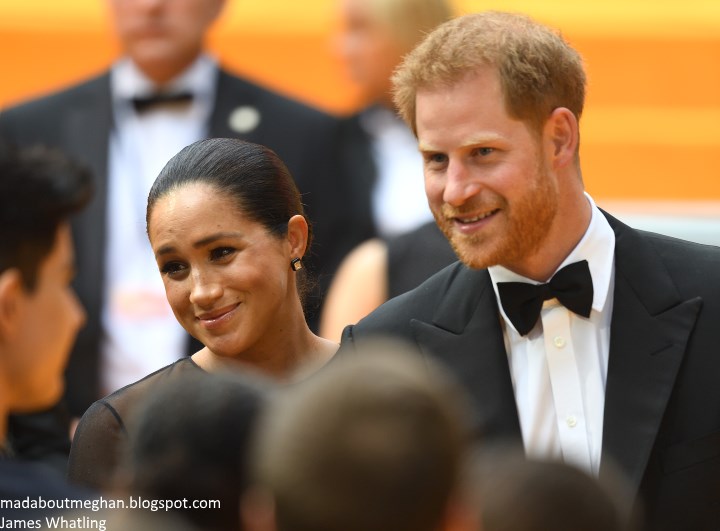 The premiere is in support of a worthy cause particularly close to Harry's heart. Buckingham Palace said: "The premiere is being held in support of the conservation and communities work of His Royal Highness through the Royal Foundation. The Duke of Sussex has taken a deep personal interest in frontline conservation projects that work to protect Africa's natural heritage and support both wildlife and local communities. On leaving the Army in 2015, His Royal Highness spent three months working on number of such projects in Namibia, Tanzania, South Africa and Botswana. The Duke of Sussex is President of African Parks and Patron of Rhino Conservation Botswana. The Duke and Duchess of Sussex will undertake an official visit to South Africa this autumn at the request of the Foreign and Commonwealth Office. The Duke of Sussex will visit Angola and Malawi at the request of the Foreign and Commonwealth Office and undertake a working visit to Botswana whilst in the region." 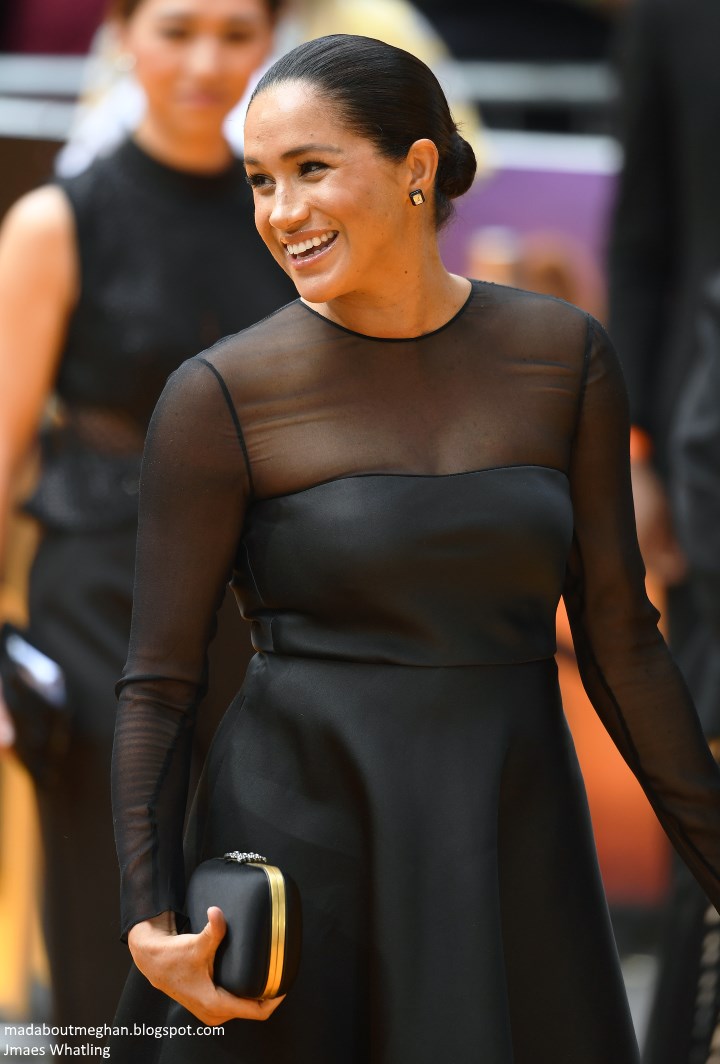 In celebration of the film’s release, the Walt Disney Company announced Protect the Pride, a global conservation campaign working with many conservation partners to raise awareness and support efforts to protect and recover the dwindling lion population across Africa. Since The Lion King was first released in theatres 25 years ago, half of Africa’s lions have disappeared. Lions face rising threats, such as poaching, loss of prey and destruction of habitat, however, research shows the lion population can recover. 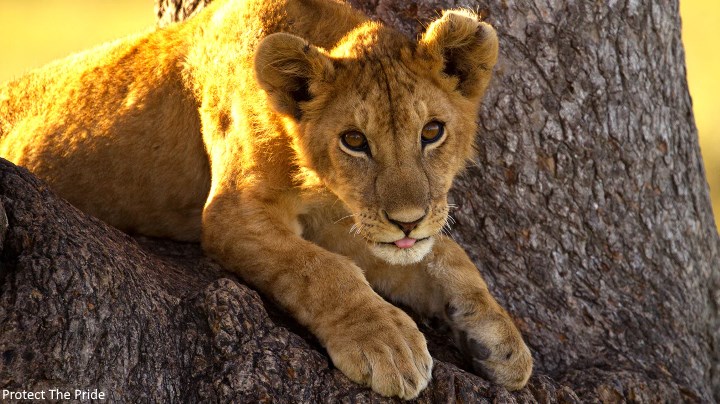 The Royal Foundation said they are "excited" to support and be involved in the Protect the Pride campaign, alongside partners including the Wildlife Conservation Network’s Lion Recovery Fund to find solutions that benefit people, communities and wildlife across Africa. The Palace added: "Through the work of the Duke of Sussex, the Royal Foundation is committed to advancing community conservation efforts across Africa and around the world, working with communities to ensure a sustainable future for the planet." Although, Harry and Meghan will be launching their own Foundation later this year, they still have commitments tied up in the Royal Foundation and it will be a process to make the transfer of Harry's projects over.

The Duke and Duchess greeted members of the crowd.

There was quite the reaction when they went over to chat to well-wishers. 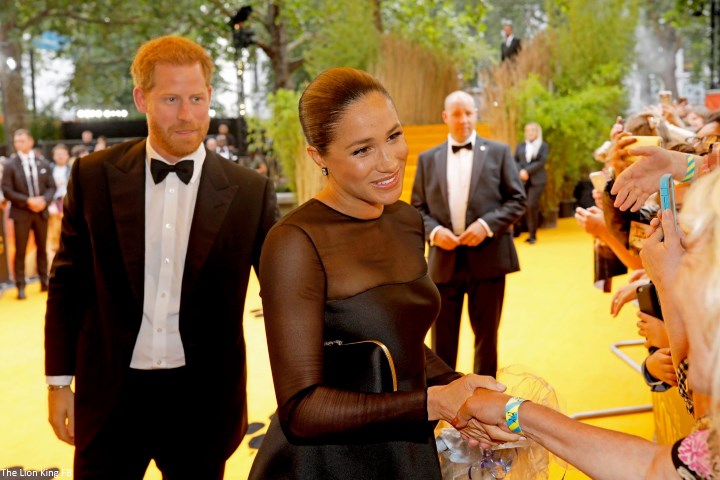 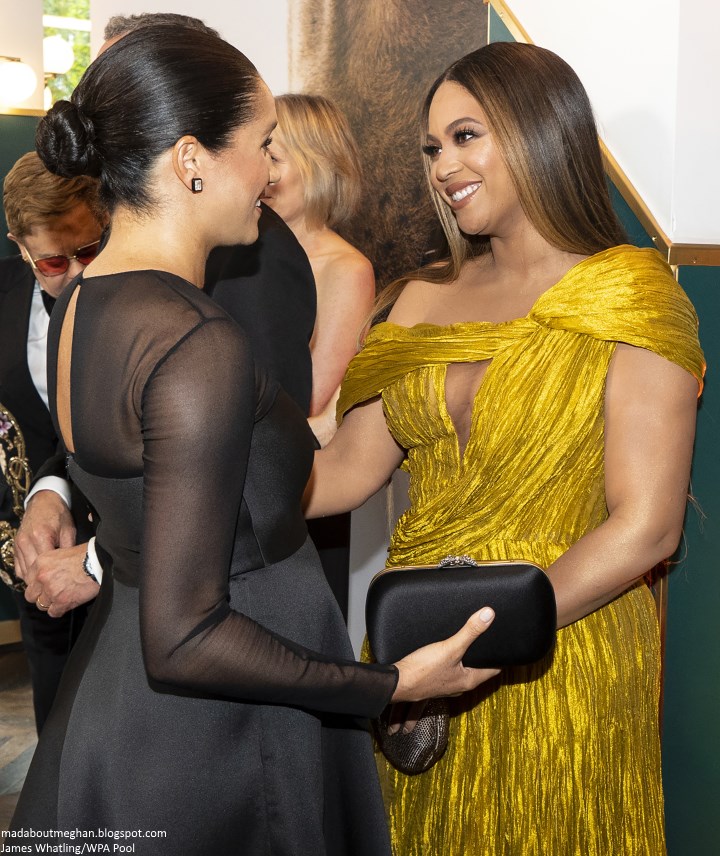 Beyonce greeted the Duchess by smiling and saying "My Princess".

‘We love you guys.’ Meghan then turned to introduce her husband, dressed in a dashing tuxe, who greeted Beyonce with a kiss on each cheek and Jay-Z with a handshake. ‘You’ve been rather busy,’ said Harry to Beyonce.

‘Congratulations on the birth of your baby,’ Jay-Z said to the prince, and nodded towards Meghan. ‘Wow that’s pretty intense.’ “And how are the twins? asked the prince, in reference to her children, Rumi and Sir, born in 2017. ‘They are not here. They don’t come on every trip,’ replied Beyonce. ‘We left them at home. They would loved to have been here.’

'The best advice I can give you, always find come time for yourself,’ said Jay-Z.'

A video from the meeting.


At the BRIT Awards, Beyoncé and Jay Z offered a very public show of support to Meghan. Beyoncé later wrote on Instagram: "In honor of Black History Month, we bow down to one of our Melanated Monas. Congrats on your pregnancy! We wish you so much joy."

The Duke and Duchess were delighted to chat with Elton John, the singer was a friend of Princess Diana and performed at Harry and Meghan's wedding last year. He said to Meghan: "I'm admiring your shoes."

The pair shared a hug and he whispered something into her ear. I imagine it was words of support for the Duchess. The reaction Harry and Meghan get wherever they go is overwhelmingly positive; the crowds are always huge and there's a real air of excitement when they arrive.

The couple met Evie and Valentina who presented them with flowers, a Simba toy and a book for Archie. They told the Mail Meghan was "delighted" with the gifts.

A photo of members of the cast and production team. 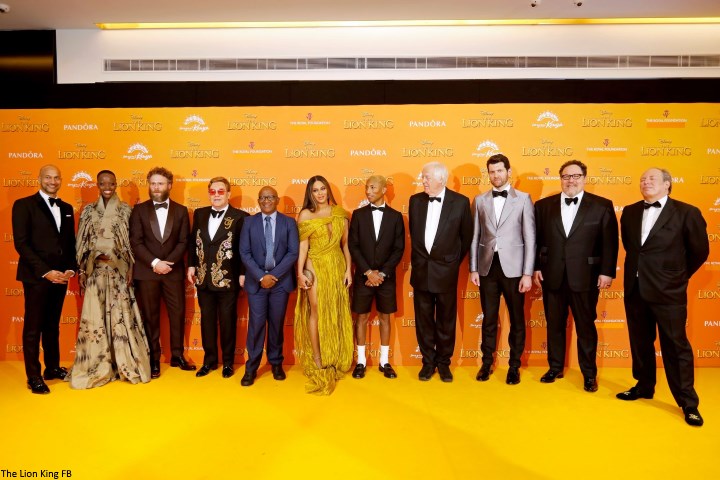 The extended video below includes footage of Harry and Meghan's meeting with Pharrell. At one point the artist said to Meghan " So happy for your union. Love is amazing. It's significant. We cheer you guys on". Meghan replied: "Thank you. They don't make it easy".


A very fun video on the royal visit.


The Duchess looked elegant in Little Black Dress by Jason Wu (with thanks to Christine). 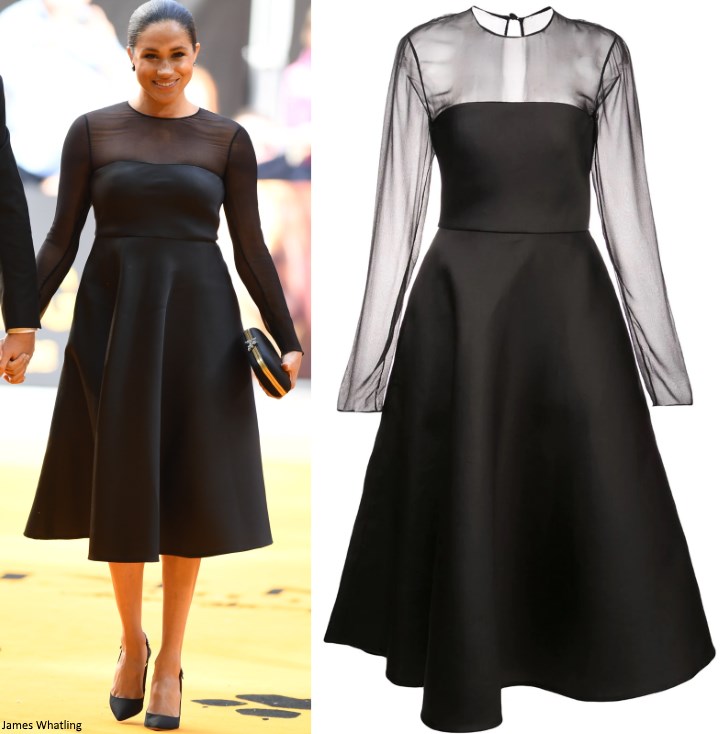 The mesh-paneled, flared dress features a round neck, long sleeves, a fitted waist, a flared style, mid-calf length and a back button fastening. It's available in limited sizes at Farfetch. 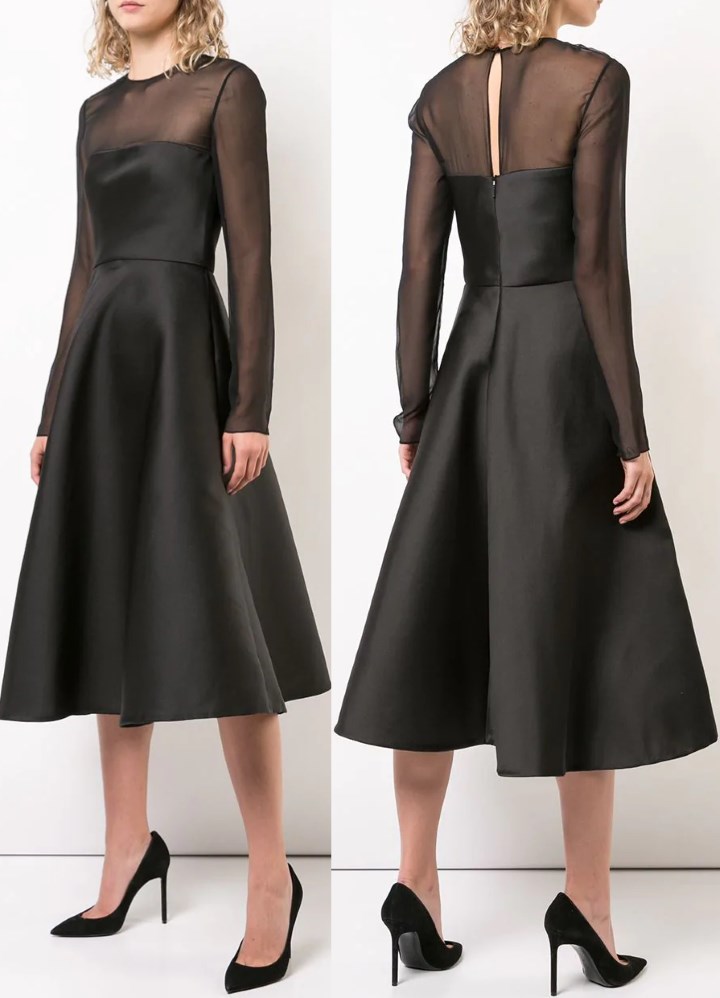 The Duchess wore the eye-catching Aquazzura Portrait of a Lady pumps. 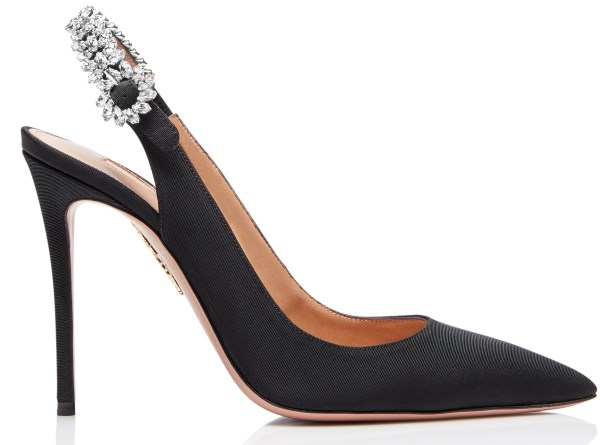 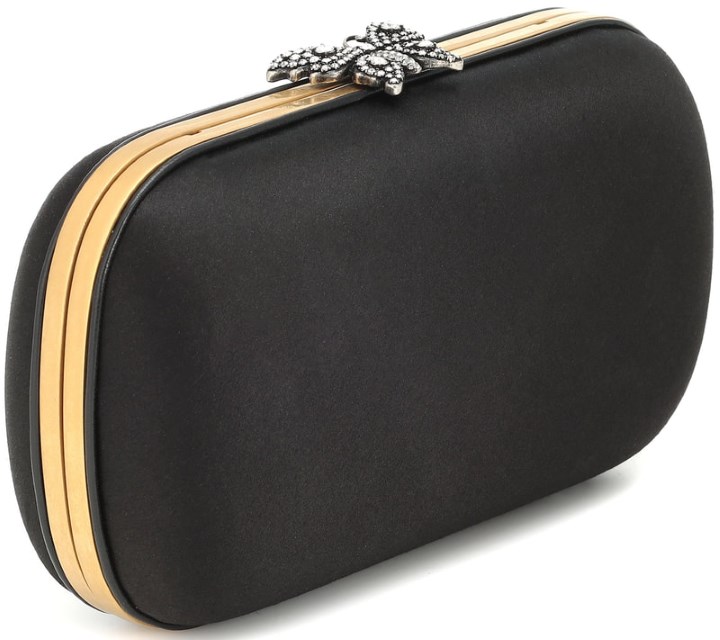 It was a splendid evening and a treat to see so much great interaction between Harry, Meghan and all those they met. 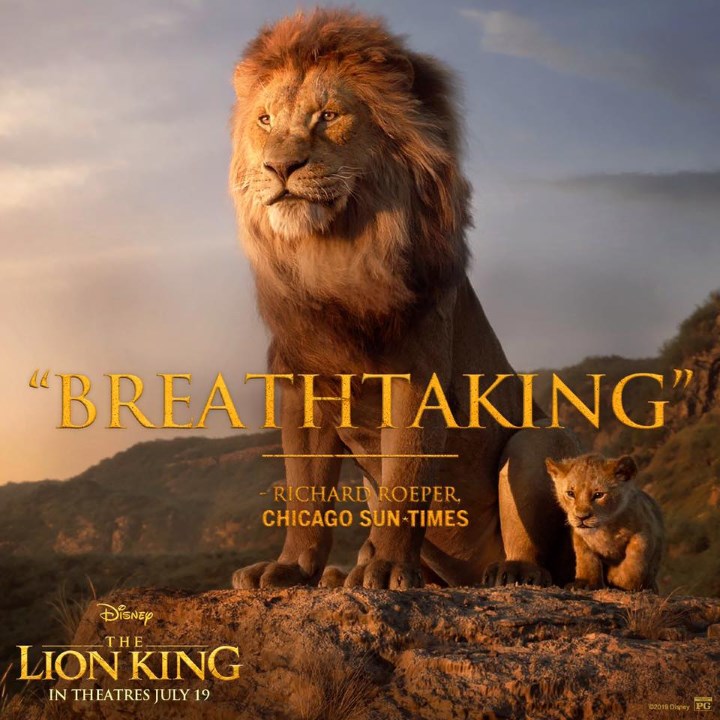 Are you looking forward to seeing the new Lion King?
Posted by Admin at 7/14/2019