The Duke and Duchess of Sussex began day two in South Africa by visiting Monwabisi beach to see the work of Waves For Change in action. 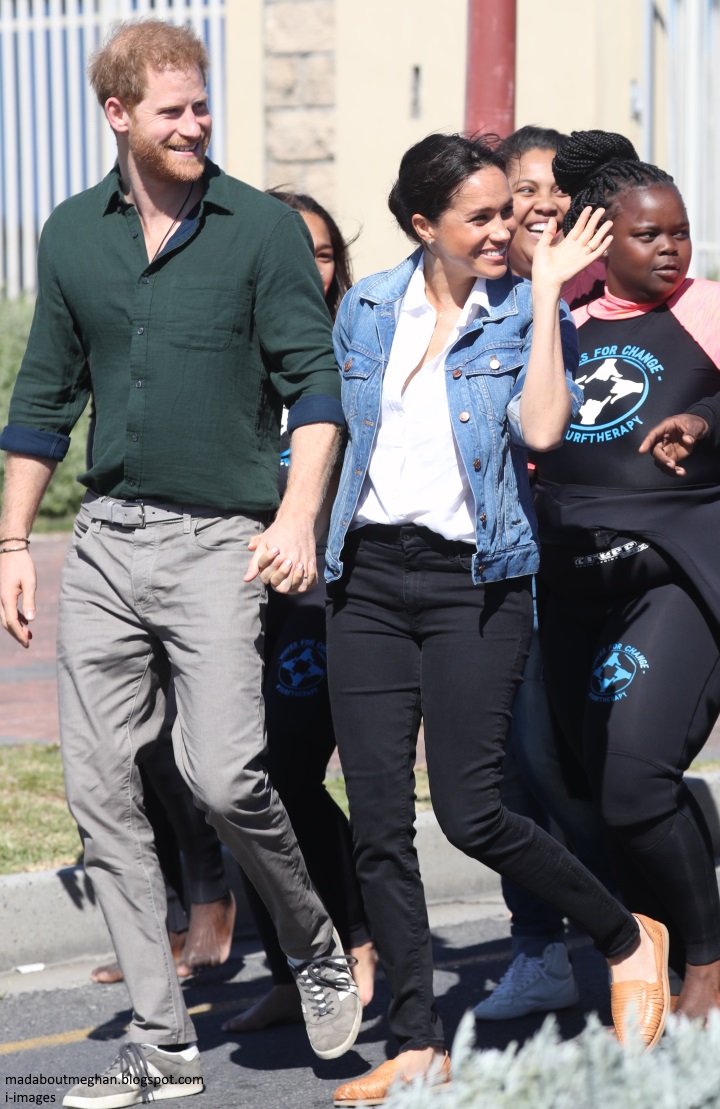 Each month, Harry and Meghan highlight a selection of charitable organisations on their Instagram account Sussex Royal. From mental health advocates and organisations, to conservation and environmental causes and Forces For Change, they have successfully brought grassroots and under the radar efforts to millions. In August, they did just that for Waves For Change when they featured them. At the time, a representative said: "We feel incredibly honoured that Sussex Royal has chosen us as a featured charity for August. Our heart-felt thanks to everyone following and donating to our work. The reaction has been unbelievable! Thank you! As a mental health charity we know we are stronger together. Never more have we felt that than today. Your support means so much." 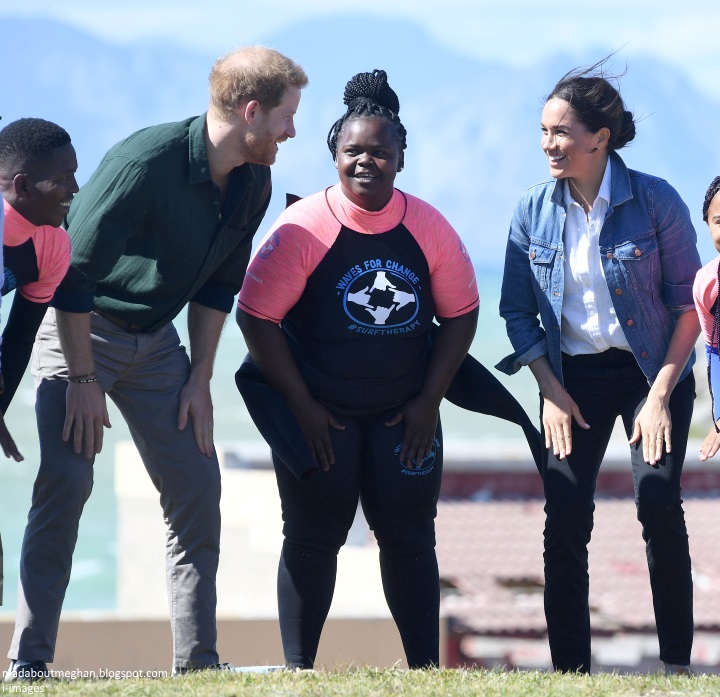 Why was Waves For Change founded? More from the organisation: "Waves For Change (W4C) was founded by Ashoka Fellow Tim Conibear, who spent time in South Africa after graduating from university in the UK. An avid surfer, Tim spent every free moment he had surfing. In 2009 he started a small surfing club in Masiphumelele Township. The club centred around voluntary weekend surfing sessions, which soon grew when local community members – Apish Tshetsha and Bongani Ndlovu – volunteered to lead and expand the club. Apish and Bongani recognised that surfing was a great way to engage young people, who soon started sharing their stories and challenges. In an effort to provide more social support, the trio reached out to local social services only to realise that local services were heavily under-resourced. A gap was identified." 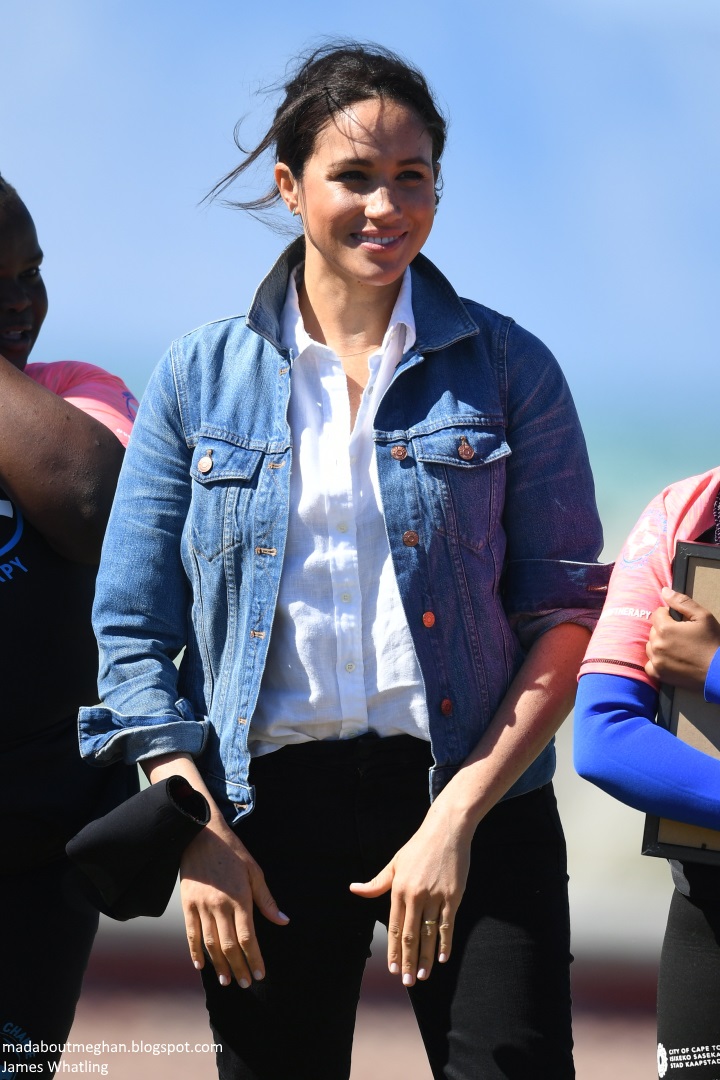 The mission statement continues: "Daily exposure to violence and stress means many South Africans suffer from acute emotional and psychological stress. In the absence of emotional support, the stress often manifests in anti-social and high-risk behaviour, placing many young South Africans at-risk. Early surfing sessions showed that participants noted improved feelings of belonging, strength, trust and confidence – key pillars of wellbeing. This was reflected in their behaviour as noted by teachers and parents. The trio crew, teamed up with mental health professionals and development experts to develop, what today is, an award winning Surf Therapy programme. W4C operates in some of the most at-risk communities in South Africa and Africa." 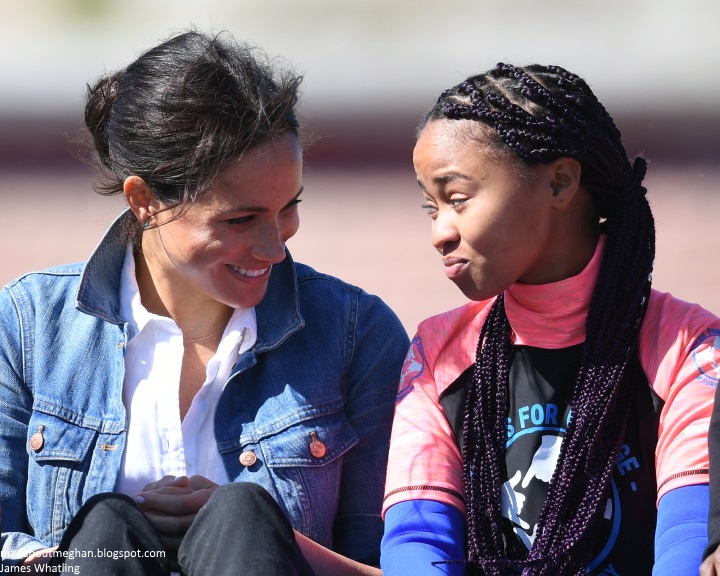 Changing lives, one wave at a time.


The positive effects are clear to see in the statistics. Over 90% of children participating said they felt happier and more confident. 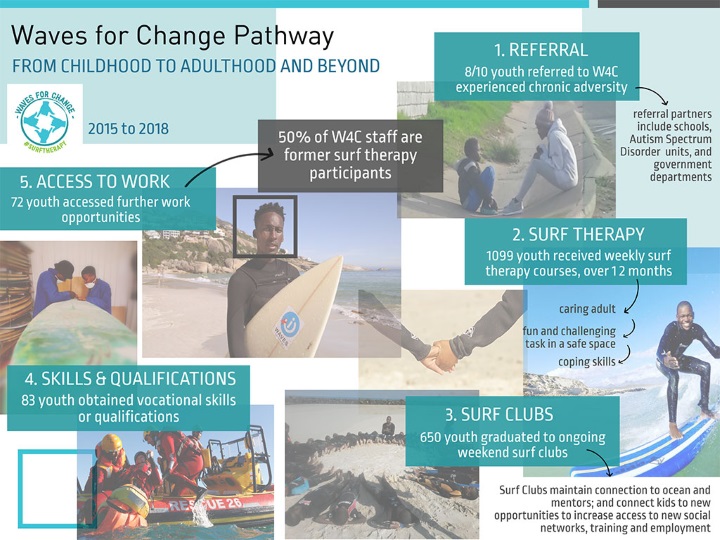 A local primary school principal added: “A bonus for me of this project is the change in the attitude of the parents -parents are now positively asking their children ‘what are you doing?’ ‘when do you go to the beach?’; they are understanding their children better and that is a contributing factor to children’s change of mind set.” 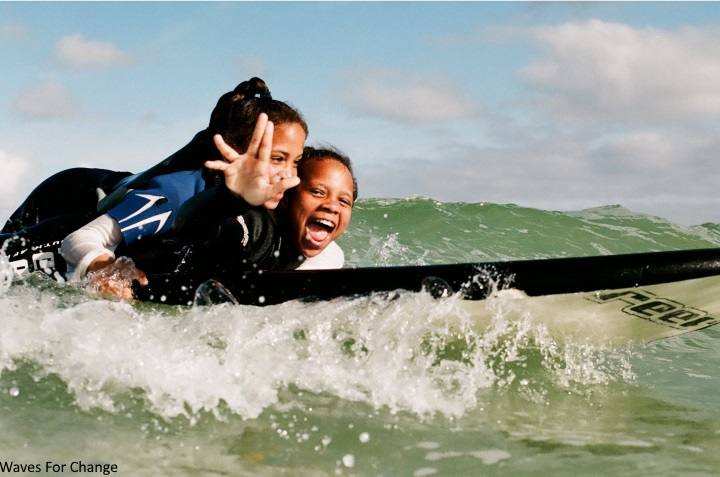 “We are very lucky to bring the kids into the natural environment into the ocean and the beach, which really gives their minds and bodies a break from the communities they are living in where they are constantly exposed to stress and trauma and challenges like poverty and violence,” Ash Heese, training and partnerships manager, tells PEOPLE. “And the beach is almost an opposite space. An opportunity to step away from all of that.”

She praises the couple as “two people who are such positive mental health champions supporting our program and mental health in general. It is so important that people like the Sussexes are promoting healthy mental wellbeing. Even just the fact that they are talking about it’s huge and valuable.”


The Duchess enjoyed spending time with the group. An early contender for photo of the day. 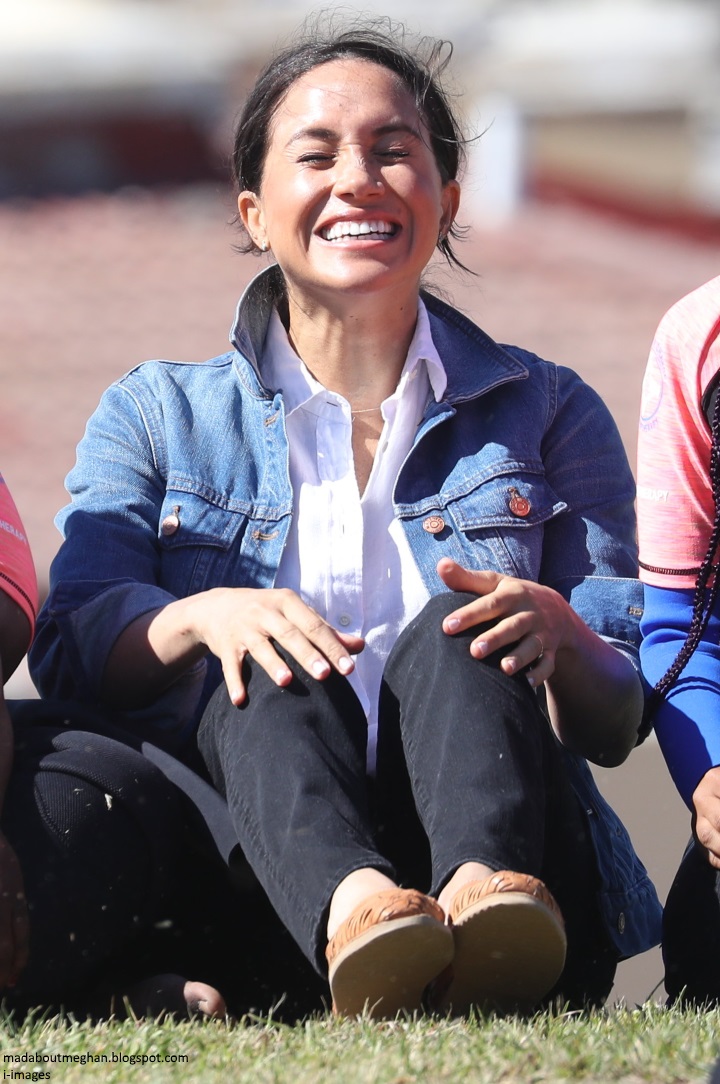 A fantastic photo with the group from Waves For Change. 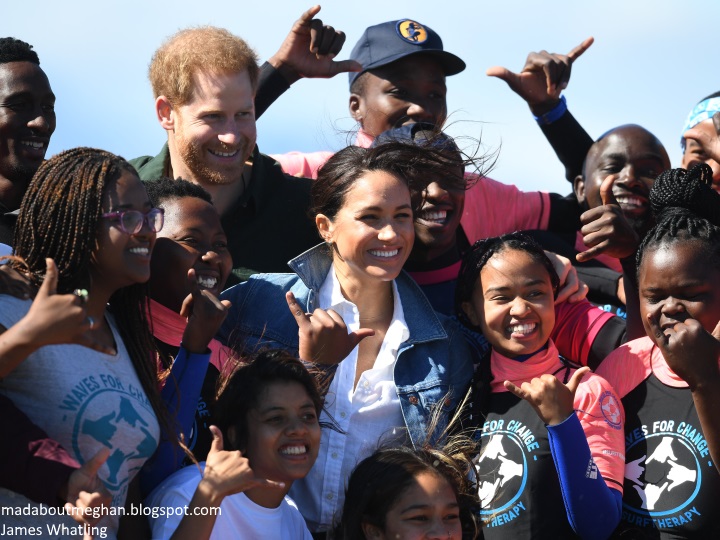 Harry and Meghan get moving with the surfers.

A video from the session.


Omid Scobie reports they both said they end their days with reflection and meditation.

“We were invited to share strengths because it’s part of the activity and identifying your strengths, you feel more positive,” Ash Heese, 37, who works as a training and partnerships manager at Waves for Change told T&C afterwards.

About Meghan, she said, “She looked a little bit hesitant so one of our coaches shared that her participation and her energy and her dancing was one of her strengths. “She laughed and said no she doesn’t think so, but parenting is a new strength that she and Harry are learning and developing,” Heese explained. "She said he’s the best dad, and he said she’s the best mum.”

Heese also described Harry and Meghan as “very engaging,” adding, “They were keen to engage with the coaches on their level, no sense of talking down or being patronizing towards them. They seemed genuinely interested in our coaches and our coaches are the heart of our program.” “It’s wonderful to have such positive mental health champions showcasing our work, showcasing the importance of positive youth development,” she said.

Royal fans on the beach.

Harry and Meghan saw the work of The Lunchbox Fund next. Ahead of Archie's birth, the couple chose four charities for well-wishers to support to mark the occasion. It was particularly important to them in their roles as President and Vice President of the Queen's Commonwealth Trust to choose a charity supporting children in the Commonwealth. Like all of us who have learned about their work, the couple were reportedly blown away by the efforts of the organisation.

The Lunch Box Fund supports vulnerable children in South Africa to get the education they need to escape a life of poverty by providing a nutritious daily meal to schoolchildren who would otherwise go hungry. The fundraising effort, #GlobalSussexBabyShower, saw over $31,000 raised, providing 152,000 meals to impoverished children. 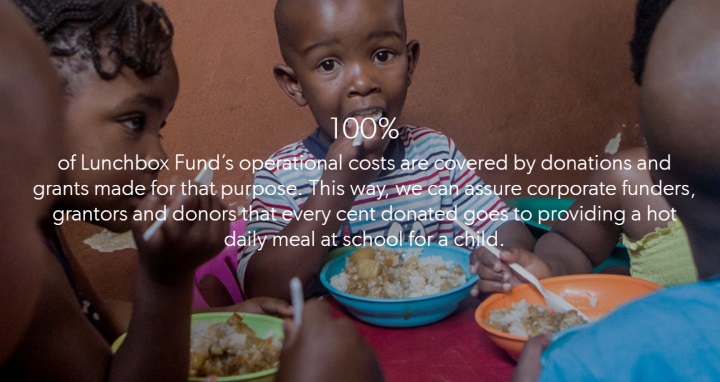 More from The Lunchbox Fund "The first five years of a child’s life are critical for their physical, social, emotional and cognitive development. The ‘essential package’ of integrated ECD services in South African policy covers the five pillars of: Social Services, Maternal and Child Health Interventions, Support for Primary Care Givers, Stimulation for Early Learning, and Nutrition Support. The Lunchbox Fund seeks to address two of these five pillars – Nutrition Support and Stimulation for Early Learning – through spearheading nutrition provision in ECDC and playgroups offering quality educare across the country. Investing resources to support and promote optimal child development from a young age yields compound dividends into adulthood, and contributes to a country’s truly sustainable development." The Lunchbox Fund patron is Archbishop Desmond Tutu. Harry and Meghan will meet him and his wife tomorrow.

There's a 50 minute video below covering all aspects of the visit.

As the couple departed, they spoke to Sky News reporter Rhiannon Mills about their visit. It marked their first interview since Archie's birth. When asked about the most pressing issue when addressing the stigma of mental health, Meghan said: "It's just getting people to talk about it, and talk to each other right. You see that no matter where you are in the world. If you're in a small community or a township, if you're in a big city, everyone is dealing with a different version of the same thing. Globally, I think there's a bit of a consciousness crisis and so the fact we are able to be here together and see on the ground so much good work that's being done just because people are willing to talk to each other about it, and someone's willing to listen is huge. And that can apply to being here. It certainly can apply to London, LA, it doesn't matter where you are, we're all sort of trying to power through and find some optimism".


Harry and Meghan also spoke with CNN's Max Foster. The Duchess said: "I think what's so amazing about being here today is you can see there's so much good happening in the world. There's so much positivity and all this inclusivity and diversity".

'Asked what it was like being back in Africa — and the first time in South Africa for Meghan, Harry replied: “Yesterday was great and to start in Nyanga was amazing. I think everyone across the world now has probably heard about what’s been happening more recently – that kind of stuff happens all the time, every year, but it really peaked in the last month or so we’ve done our best to keep track of what’s been going on.”

“This Africa tour was always going to be fantastic, been looking forward to Cape Town — her first visit — I love this place,” he continued. “And again meeting the people, the energy, the fun, again the positivity, the optimism and the hope in the face of such incredible adversity. There are young people and older people, men and women trying to change what effectively has become the norm.”


As Harry headed off for a solo engagement, a kiss goodbye was in order :) 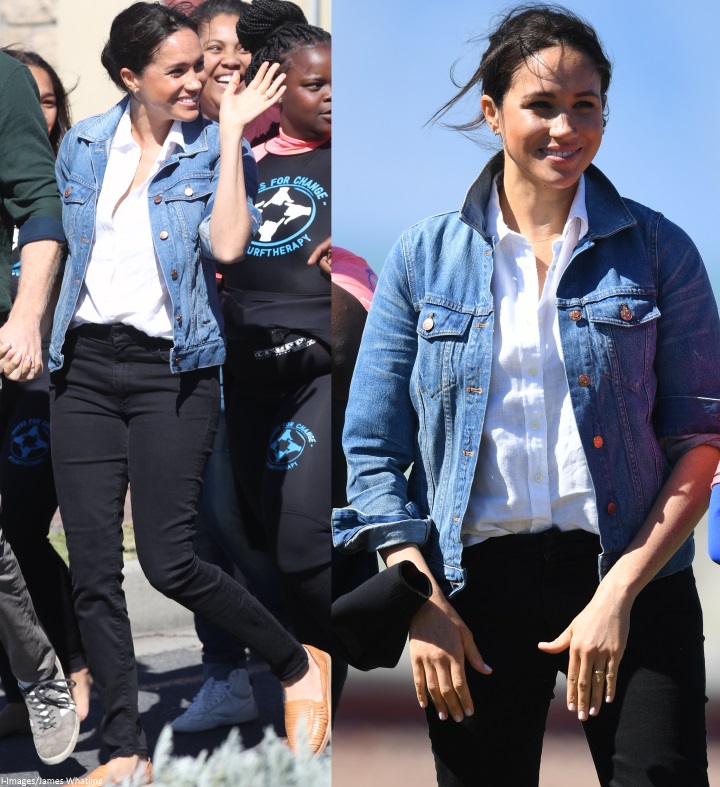 The Duchess wore her $118 Madewell Denim Jacket in pinter wash. Meghan's had the piece for several years and was last photographed wearing it on the set of Suits in 2017. It's available on the Madewell website and Nordstrom. 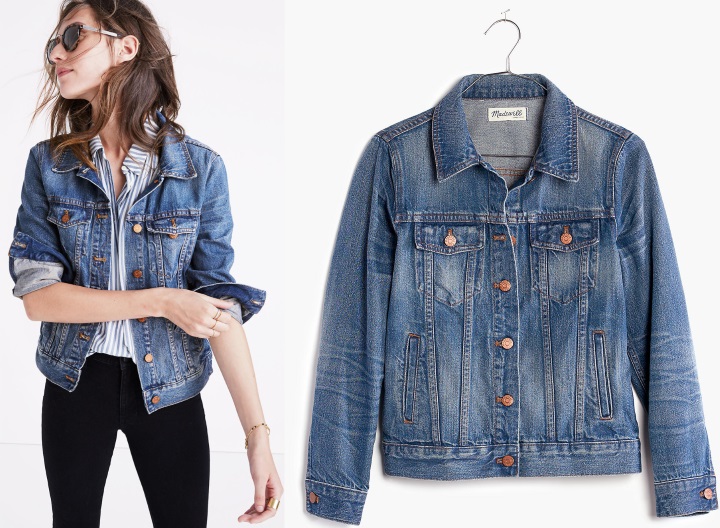 More from the product description:

'Made with top-of-the-line denim, this perfect-fitting jean jacket will never ever go out of style (take our word for it). Layer this best seller under a blazer for extra warmth, or button it all the way up for a fitted look. We partner with the Better Cotton Initiative to improve cotton farming globally.'


It appears Meghan wore her Mother Denim Looker Skinny Jeans in black. The $196 style is described as "a classic skinny jean in a form fitting silhouette with super stretch fabric." 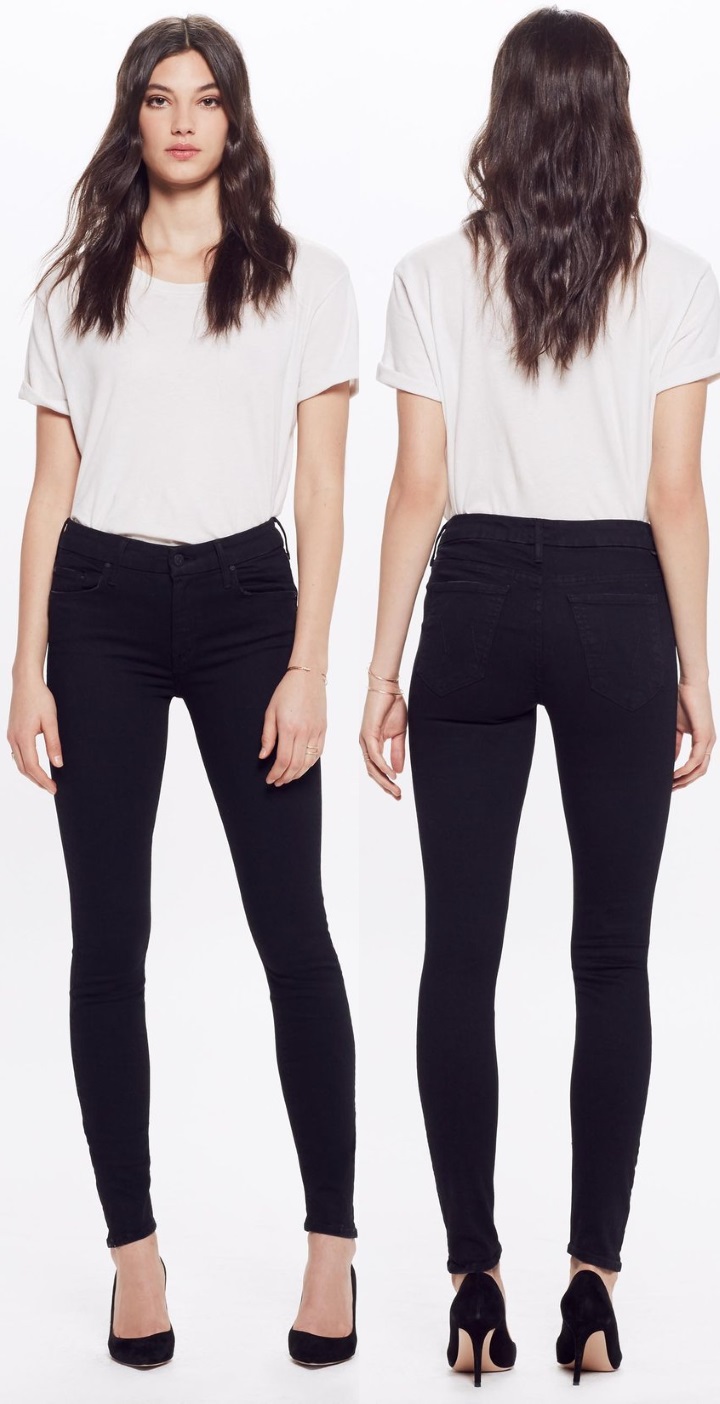 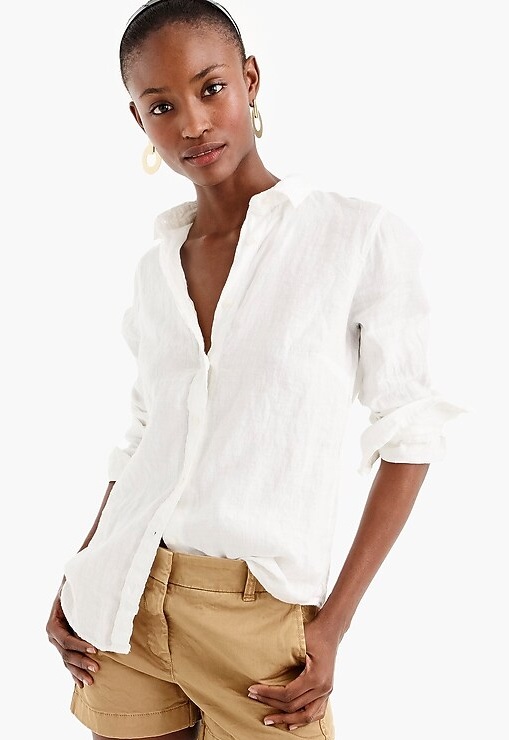 The Duchess carried the $78 Canvas Medium Transport Tote by Madewell in British Surplus (with thanks to Heaven). 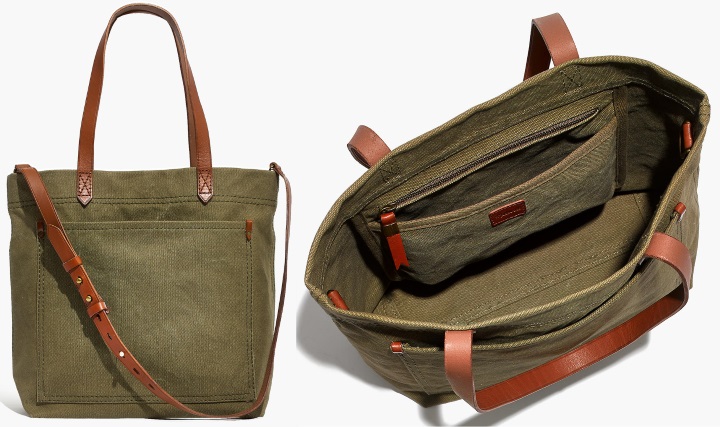 And the Jennifer Meyer turquoise earrings she wore yesterday.

This afternoon, the Duke and Duchess will visit the Bo Kaap area to mark Heritage Day, a celebration of great diversity, belief and traditions that make up the rainbow nation of South Africa. They will visit Auwal Mosque, the oldest mosque in the country where they will meet representatives of various faiths and discuss the strength of interfaith dialogue in Cape Town. Afterwards, local residents will host the royals for tea.
Posted by Admin at 9/24/2019